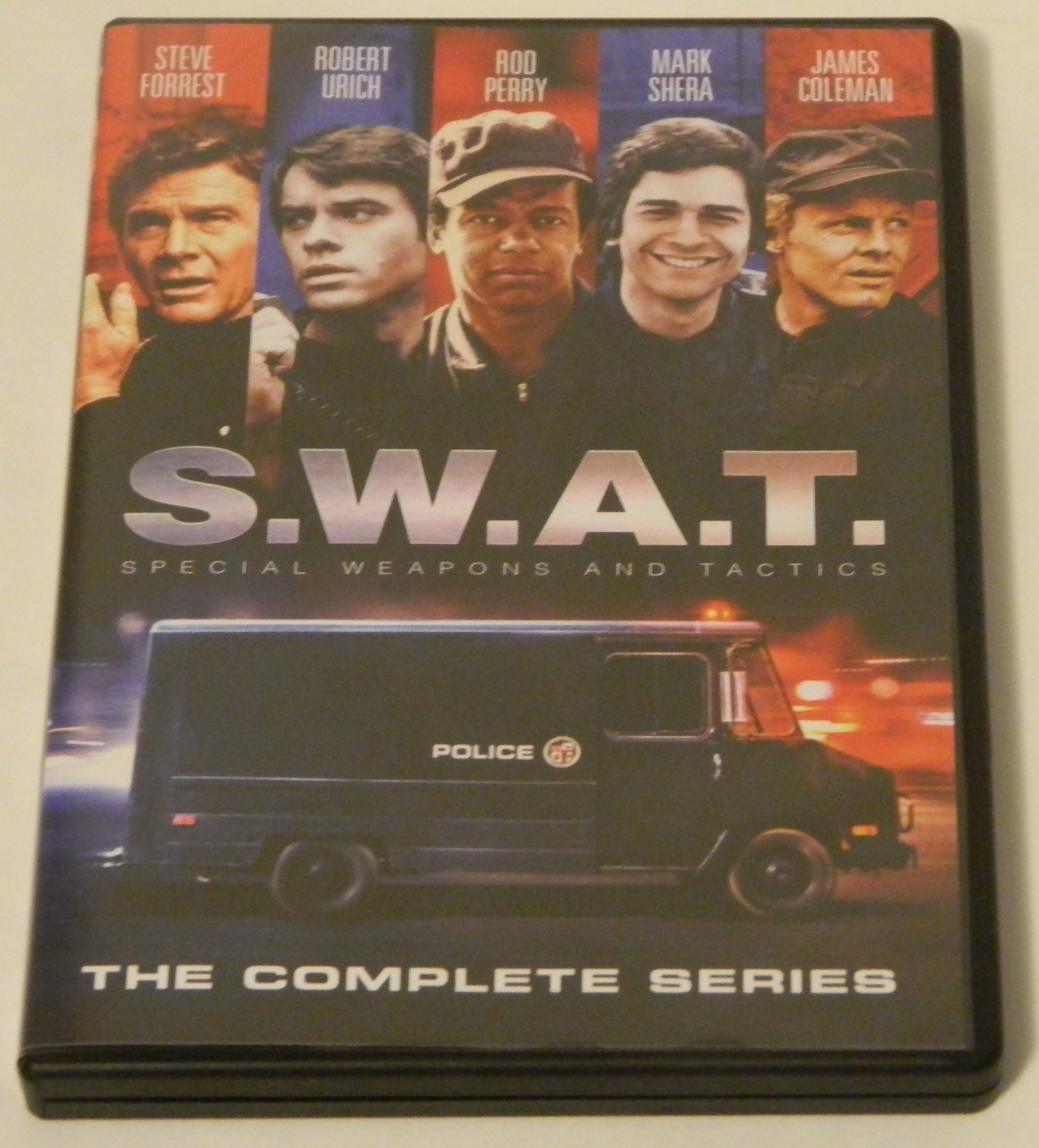 In November, CBS started airing a reboot of S.W.A.T. featuring Shemar Moore as the lead. This is most likely the catalyst that led to S.W.A.T.: The Complete Series (the original 1975-76 series) being released this month. I will admit that I am not the biggest fan of police procedural shows but I do watch the occasional one that piques my interest. Even though it is a forty-year-old show, S.W.A.T. seemed interesting enough to give it a chance. I didn’t expect it to be amazing or a must-watch, I just expected a solid middle-of-the-road police procedural show. After watching a few episodes of the show, that’s pretty much exactly what I thought of it.

S.W.A.T. is a spin-off of The Rookies (in fact the pilot episode aired as part of that show on February 17, 1975). The next week, S.W.A.T. began a two season run as its own series and ultimately the show ran for 37 episodes on ABC. The series featured S.W.A.T. team leader “Hondo” Harrelson (Steve Forrest) as he put together a new team to stop the biggest criminals the California city they operated in had to offer (the city was never specified though it was likely meant to be Los Angeles). His team includes Jim Street (Robert Urich), Sgt. Deacon Kay (Rod Perry), Dominic Luca (Mark Shera), and T.J. McCabe (James Coleman). The team must take down gunmen targeting police officers, a prisoner who escapes from jail, and your other usual police procedural targets. So, basically your typical police procedural show.

Pretty much everything about S.W.A.T. is average but there are a few positives I want to point out. First of all, the talent roster is pretty stacked with names that even a millennial like me will recognize like Steve Forrest and Robert Urich. While there certainly aren’t any award-winning performances in this show, the acting is overall pretty good. Also a positive (at least for some viewers), today’s police procedurals tend to have a lot of realistic violence and blood. S.W.A.T., which was produced during a time when violence on television was considered controversial, is pretty much only as violent as today’s cartoons are, making it a good choice for people who don’t like a lot of blood or gore. It was likely quite violent for its time but nowadays, I wouldn’t even consider it violent. The final positive is the awesome theme song that I’m sure most of you have heard even if you’ve never seen an episode of the show (which was even a top ten hit song). I don’t really have many complaints outside of the typical police procedural negatives (story quality varies episode to episode and procedurals just aren’t as interesting to watch as serialized shows are).

Both seasons of this show have already been released on DVD (Season 1 by Sony and the final season by Shout! Factory), however they are both pretty pricey (both are over $20 used on Amazon) and this is a much better value at a $24.98 retail price. However, while you save some money you also likely give up a little bit on video quality (though I don’t own the season set releases and thus can’t compare them). I do know that the episodes almost had to be compressed video-wise to get 37 episodes on six discs (the same amount of discs as the Season Two DVD release has). While I’m pretty sure that the video quality on this release is going to look slightly worse than the season set releases, it is a show from 1975 and you really shouldn’t be expecting beautiful video quality anyway. Overall though, I didn’t really see any major issues with the video quality on the episodes I watched. Obviously the show didn’t look gorgeous or anything, but there weren’t any real issues either. For those who worry about Mill Creek Entertainment’s usage of sleeves to keep costs down, this release uses standard DVD trays so you don’t have to worry about your discs. No bonus features are included on S.W.A.T.: The Complete Series but how many lesser-known older shows get extras? The only major flaw with this DVD release is that it doesn’t include the two-hour pilot episode that aired as part of The Rookies (a pretty big omission). The episode wasn’t aired as part of S.W.A.T. (so it’s still technically “complete”) but it is still a little disappointing that it isn’t included. It most likely wasn’t included due to rights issues.

S.W.A.T.: The Complete Series is certainly worth a watch for fans of police procedurals, especially ones who don’t like super violent ones. Like most police dramas, it isn’t amazing and the episodes vary significantly in terms of quality but overall most episodes rate out as at least average. I personally prefer serialized shows but I can definitely see the draw in stories that wrap up in 50 minutes. Recommended, but mostly just for police procedural fans.

One thought on “S.W.A.T.: The Complete Series DVD Review”