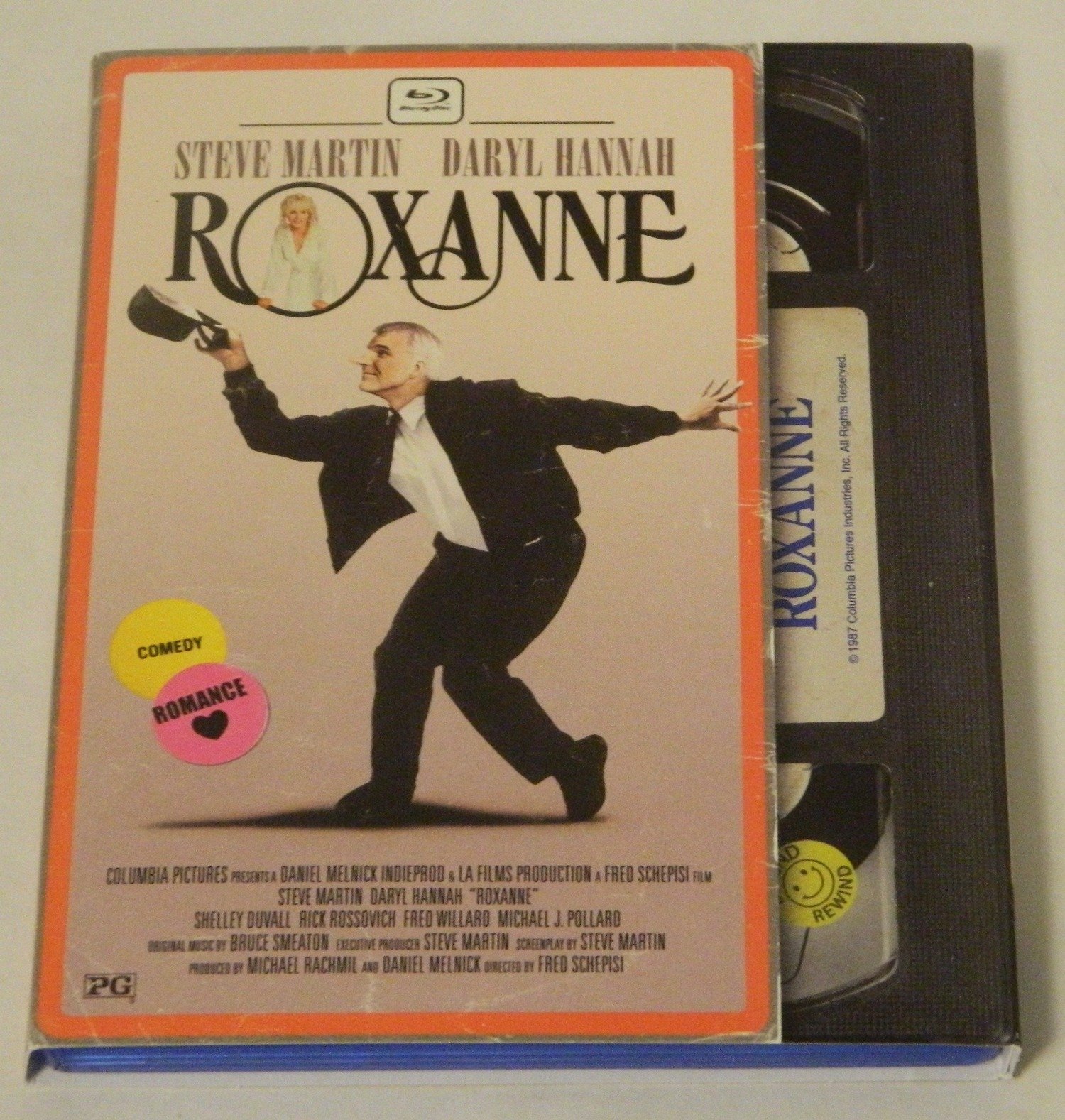 The play Cyrano de Bergerac (which was actually based on a real-life novelist and playwright of the same name) has seen numerous adaptations in the world of media since it was written in 1897. It’s been turned into over a dozen films, animations (including an episode of Bob’s Burgers), and even a scientific study (about one of the plot points included in the play). Some of these adaptations are more “loose” than others. Roxanne is a modernized version of the story with themes that stay relatively faithful to the play but also some major changes to make it appeal to a modern audience (and a major change with the ending). Overall, it’s a solid enough comedy with some genuinely laugh-out-loud moments and a lot of heart. The only problem is that it is very inconsistent with the laughs and has some scenes that stretch on for far too long.

Roxanne is a Steve Martin and Daryl Hannah-starrer which also features smaller roles by some actors that would soon become well-known like Damon Wayans and Fred Willard. In this version of the story, Martin plays the Cyrano de Bergerac character who in this film is a firefighter chief named C.D. Bales. C.D. (or “Charlie”) is also an amazing gymnast (he can scale buildings like its nothing), an incredibly intelligent and cultured person, and a master wordsmith. Just don’t mention his abnormally big nose or you’ll get your butt whipped with a tennis racquet. C.D.’s life is changed forever with the arrival of two new people to his small mountainous town. Astronomer Roxanne Kowalski (who is in town to try to confirm an asteroid she thinks she’s found) locks herself out of her home and after C.D. helps her out, he instantly falls in love with her. However, she only has eyes for the other new arrival in town, fireman Chris who is C.D.’s exact opposite. While he is easy on the eyes, he is also as dull and dumb as a box of rocks (or even dumber). He also has problems talking to women and so he enlists C.D.’s help with wooing Roxanne. C.D. being the incredibly nice person he is, helps out with his words through letters and by giving him advice on what to say. This works but it becomes clear that Roxanne is more enamored with the words “Chris” uses to profess his love to her than the real Chris.

One thing that’s interesting about Roxanne is that unlike most romantic comedies, the “opposition” in this film isn’t really a villain. Usually the enemy in romantic comedies is two shades away from kicking puppies or destroying orphanages. In this film, the opposition is just a man-child and complete idiot but also someone you aren’t supposed to hate. Of course everyone is going to root for C.D. to win Roxanne’s love but it’s not like Chris is a horrible person either (just an incredibly dull guy to talk to). While this is similar to the play, Roxanne makes Chris much more likable than Christian (the character from the play he is based off) and it kind of sets it apart from generic romantic comedies.

While Roxanne can be funny at times, a little trimming could have helped the film become much more than just the mediocre comedy it wound up being. The biggest problem the film has is that it will have a pretty funny scene which provides a lot of laughs early on but it will keep dragging it on and on until it is no longer funny and actually starts boring people. While there are several scenes that fit this well, I will specifically pick out the 20 big nose jokes scene as I feel it perfectly describes what I mean. It starts off with C.B. charmingly making fun of his own nose with some legitimately funny jokes. Unfortunately, it goes on and on and ultimately over half of the jokes just don’t work. If Roxanne would have cut this down to its ten best big nose jokes it really would have helped the scene. Other scenes that fit this criteria include C.D. waxing poetically as “Chris” outside Roxanne’s house and Chris’s awkward conversation on Roxanne’s porch with C.D. helping him out via earphones. Both are often quite funny but go on for far too long. Some of these scenes are helped with some nice quick physical comedy involving the town’s horrendously incompetent volunteer firefighters but most just end up boring by the time they’re done.

Comedies are generally one of the genres that are helped the least with an upgrade to Blu-ray but Roxanne is a relatively colorful and whimsical film, so it is an example of a comedy film that can actually be improved with good video quality. Even so, I really didn’t expect a comedy from 1987 to look as good on Blu-ray as Roxanne does. While it is a bit hit or miss, I would say it hits more often than it misses. The film is clear, colorful, and detailed on Blu-ray and I would say this is definitely a comedy film that you should upgrade to high-definition if you at all enjoy it. Roxanne has already been released on Blu-ray before but the last time it appeared on the format was over a decade ago. Like that release, no extras are included on the release but even the DVD releases of Roxanne appear to have been released sans special features. While I don’t have the prior Blu-ray release to compare this one to, if I had to guess I would say it is likely the exact same release with some new retro VHS-style artwork on the slipcover (as Mill Creek rarely messes with remastering unless the film is new to Blu-ray). Thus, if you already have the film on its prior Blu-ray release there is likely no reason to purchase this version unless you really, really like the VHS-style artwork.

As per usual with these retro VHS-style artwork Blu-ray releases from Mill Creek, where there’s one release there’s several more as well. Also included in the August 2019 wave is True Believer, The New Kids, and White Line Fever. Unlike Roxanne, those three titles are all new to Blu-ray so there is more of a reason to purchase them outside of the cool artwork.

Roxanne can be very funny at times but just as often, the jokes don’t work and the viewer is left with boredom. The sweetness of the film helps soften the long stretches without laughs but can’t completely salvage it. Roxanne is funny and sweet enough to earn a decent rating but also flawed enough that that rating needs to be a completely average 3/5. However, I do know that there are a lot of viewers that will enjoy it more than I did (and also some that will go even longer stretches without laughing than I did as well). It’s probably worth a watch, just be warned that you will likely go without laughing for ten minutes at a time in certain sections of the film. The Blu-ray quality does look quite nice though so if you already know you like the film, it probably pays to upgrade even if it is just a comedy (unless you already own the prior high-definition release).