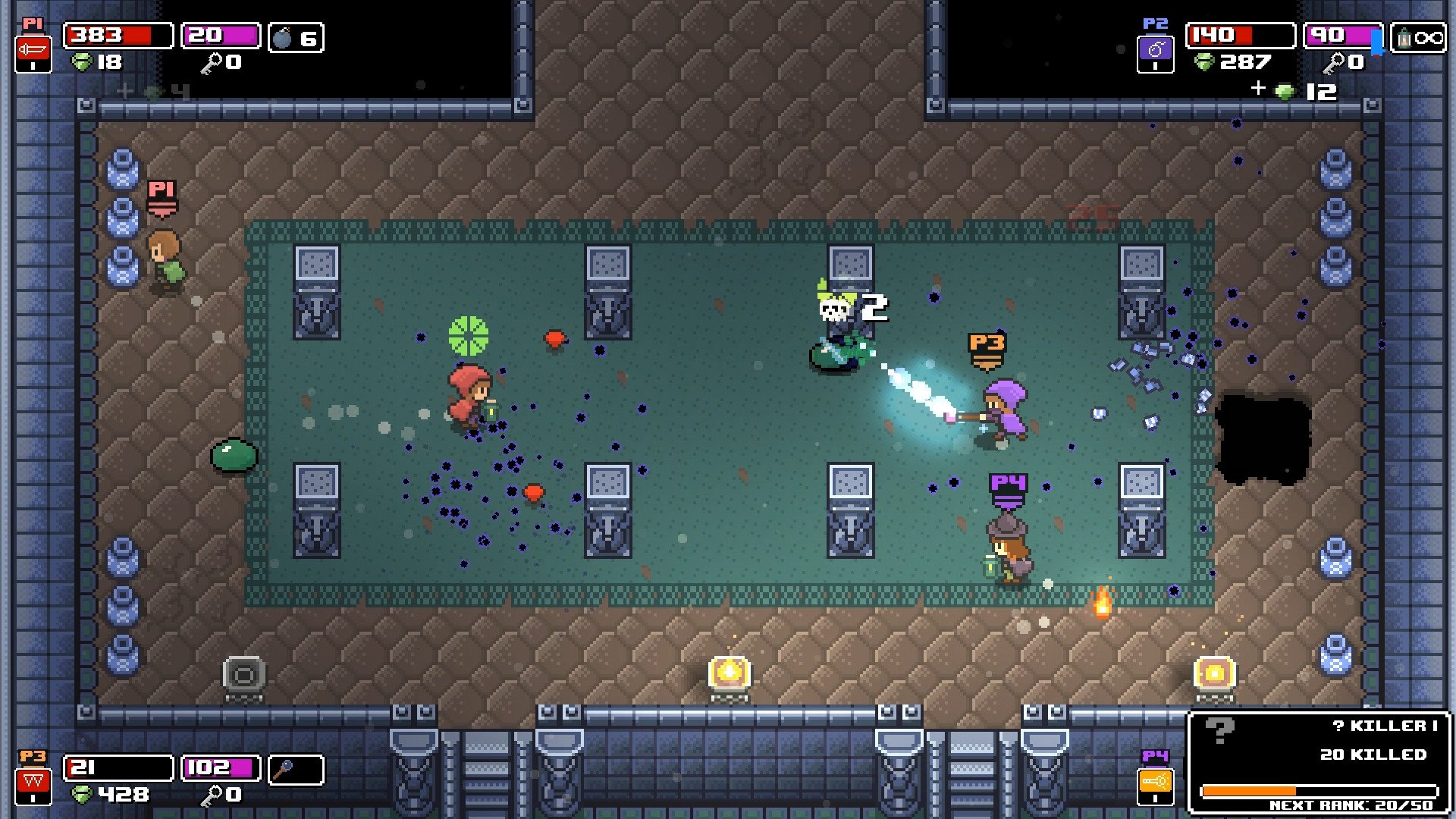 Rogue Heroes: Ruins of Tasos takes place in the land of Tasos. Many years ago the Titans wrecked havoc on the world. They were eventually sealed behind ancient seals in four dungeons spread across Tasos. As time has passed though, the seals have begun to weaken allowing the Titans’ minions to bring havoc to the world. You and your fellow adventurers will need to form a band of heroes to try and seal the Titans away for good.

If I were to describe Rogue Heroes: Ruins of Tasos I would say that it feels a lot like a combination of the old 2D Legend of Zelda games mixed with the more modern rogue-lite genre. The world of Tasos consists of a hub town which you will develop as you acquire resources. Tasos is surrounded by wilderness of different climates filled with dangerous creatures. The game has a sense of exploration as you need to find certain locations in the overworld in order to progress the story. As you progress through the game you will acquire various pieces of equipment which you need to use in order to open up paths to new sections of the overworld.

To start the game you will begin as a basic warrior with a sword and shield. As you progress through the game you will unlock a number of different classes. These other classes include other warrior classes as well as some that mostly focus on magic or ranged combat. Each class has one main attack, a special attach, and a block. As you progress through the game you will also acquire other special pieces of equipment that you can use to attack the enemies you encounter. You have a health bar which you can increase by purchasing upgrades. When you defeat certain enemies or destroy bushes/pots you will receive pickups that will restore some of your health. If you run out of health you will be returned to the village.

The combat in particular reminded me a lot of the 2D Zelda games. The combat is kind of simple as you mostly keep using your main attack until you deal enough damage to defeat an enemy. Your character does have a limited amount of stamina though so you can’t just constantly spam the attack button without taking a break to recharge the meter. You will need to carefully approach enemies, dodge attacks, and use your shield as you can’t take a lot of hits or your health will deplete quickly. You can also use some of the equipment like bombs, arrows, boomerang, etc. that you gathered throughout your journey. The combat might not be the deepest, but I really enjoyed it. The controls are responsive, and it is quite satisfying clearing out rooms. Fans of the 2D Zelda games or other similar games, should really enjoy this aspect of the game.

While you will spend a decent amount of time exploring the overworld, you will eventually come to the game’s various dungeons. These dungeons consist of three floors and a final boss. Each dungeon is randomly assembled for each run by utilizing handcrafted rooms that are combined together. Some of these sections only have enemies while others feature puzzles and traps. For the most part I thought the level design was pretty good. You can tell that the rooms are handcrafted as they present their own challenges and don’t feel like a random group of obstacles to overcome. The rooms that contain puzzles are quite clever for the most part outside of a couple that are kind of basic. The only real complaint that I had with the level design is that you will encounter the same rooms every so often unless you breeze through the dungeon.

As you progress through the dungeon you will acquire gems which are used for upgrades for your character and the town once you leave the dungeon. As Rogue Heroes: Ruins of Tasos is a rogue-lite, when you die in a dungeon you will be kicked back to the town. You can then use all of the gems and coins that you acquired to buy things in town and purchase upgrades to power up your character for your next run. When you return to the dungeon a new one will have formed forcing you to start from the beginning unless you purchased the shortcut. You will have to keep attempting the same dungeon until you beat the boss at the end which opens up the next section of the game.

In recent years the rogue-lite genre has become one of the most popular in the indie video game industry. While I enjoy the occasional game from the genre, I wouldn’t consider myself to be one of the genre’s biggest fans. This is mostly due to the fact that I am not a big fan of losing a lot of progress due to dying. Rogue Heroes: Ruins of Tasos does a pretty good job in this area. You will have to restart any dungeon that you die in, but the game is quite forgiving. You can unlock shortcuts to each level of the dungeon so you don’t have to repeat the entire dungeon. The amount of currency that you acquire can really improve your character for the next run as well. Therefore you won’t feel like you wasted your time on each unsuccessful run. Diehard fans of the genre might find the game to be a little too forgiving, but I think this works well with the more casual/party element that the game is trying to attract.

As for the game’s difficulty I would say that it is kind of mixed. As the game is a rogue-lite, you are going to die in the game. When you die you use the gems you acquired to upgrade your character to make it more powerful for your next attempt. At least in my experience the game has kind of an up and down flow to the difficulty. When you first enter a new dungeon the battles can be pretty difficult as your character is likely under-powered. After a couple of runs and some upgrades though, your power grows to the point where you can easily breeze through a dungeon. To illustrate it took us a while to complete the first two dungeons. Then when we got to the third dungeon we breezed through it. I kind of wish the difficulty was a little more balanced, but it is challenging enough where you can still enjoy playing the game.

Rogue Heroes: Ruins of Tasos has a lot of good elements working in its favor. I think the best though is that the game is built to be a cooperative experience. You could play the game by yourself as it wisely adjusts the levels to accommodate any player count. I would recommend against playing the game by yourself though. The game was built as a cooperative experience, and I think you will miss out on something if you don’t play it with other players. I only ended up playing the game with two players, but it was still a really enjoyable cooperative experience. I think it would be even more enjoyable with more players. I ended up playing the game with local co-op which worked great. It seems like the game has some early issues with its online multiplayer though. Outside of some puzzles that require teamwork, I wouldn’t say that the game requires great teamwork. Most of the cooperative gameplay just comes from trying to work together in order to eliminate all of the enemies in each room. If you have any interest in a cooperative 2D Zelda game you likely will love playing Rogue Heroes: Ruins of Tasos.

As for the game’s overall atmosphere, it really reminds me a lot of the 2D Zelda games. The game utilizes a colorful world full of interesting characters and creatures. The game’s artwork is well done for fans of this art style. The game’s story shares a lot in common with many games from this genre. I still found the story to be engaging though where I wanted to see how it would end.

I really enjoyed playing Rogue Heroes: Ruins of Tasos. The biggest problem that I had with the game was just that navigating was a little more difficult than it needed to be. The dungeons are designed in a way where they are pretty easy to navigate especially after you acquire the dungeon map. Most of the issues came from navigating the overworld. The overworld has a map that you can look at any time. The problem is that the zoom is kind of limited where you can’t see all of the fine details. The overworld is also designed in a way where there are quite a few optional locations as well as some dead ends. I just found the overworld to be kind of hard to navigate at times. We ended up getting lost a couple times as it took time trying to figure out where we had to go. This was a little frustrating, but the biggest issue was just that we ended up wasting quite a bit of time.

As for Rogue Heroes: Ruins of Tasos length, I won’t be able to give you a definitive length for a couple of reasons. First I haven’t completed the entire game yet. We have finished the first three dungeons. The game has at least four dungeons, but based on video game logic and where the game is pointing I am guessing that there will be a total of five dungeons. The other thing that likely will have a pretty big impact on the length is what type of player you are. If you are the type that likes to explore every nook and cranny it will obviously take longer as the game has quite a few hidden areas off the main path. The number of times you die trying to complete a dungeon will also have an impact. If I were to make a guess, I would say that it will take most players around 10-15 hours to beat the game if you spend any time exploring. With the game only retailing for $20, that is a pretty good deal.

As a fan of cooperative games I really enjoyed playing Rogue Heroes: Ruins of Tasos. The game basically feels like what you would get if you combined elements from the 2D Zelda games with rogue-lite mechanics. The game’s combat isn’t the deepest, but it is quite satisfying. The rogue-lite mechanics are enjoyable as none of the runs feel like a waste of time. What really makes the game though is the cooperative mechanics. The game could have probably used more elements where teamwork was necessary, but it was just really satisfying dungeon crawling with other players. I will say that the game’s difficulty can be a little up and down as the game can be quite hard and then really easy. The overworld is also a little hard to navigate at times.

Basically my recommendation comes down to your thoughts on a cooperative 2D Zelda style game with rogue-lite mechanics mixed in. If this doesn’t sound all that interesting to you, Rogue Heroes: Ruins of Tasos probably won’t be for you. If you are looking for an enjoyable cooperative game though, I think you should really consider picking up Rogue Heroes: Ruins of Tasos.