Each player chooses a color and takes the five fight cards of their color along with four fight dice. Players place their fight cards so their colored robot is face up and then mixes them up so they don’t know what is on the back of each card.

The Rock’Em Sock’Em Robots Dice Game is played in rounds. Each round begins with one of the players flipping the match coin. The face up side of the coin will show what the players have to roll in the round.

If the side of the coin with the colored rings lands face up, both players are trying to get all of their dice to show the same color. 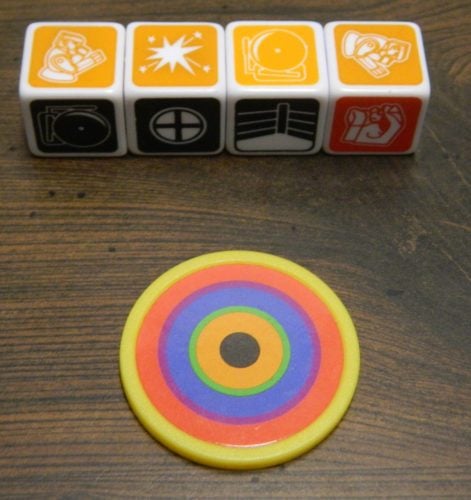 The color side of the coin is face up. The players will have to roll all the same color in order to take the coin and win the round.

If the side of the coin showing the two robots fighting lands face up, both players are trying to get all of their dice to show the same symbol. 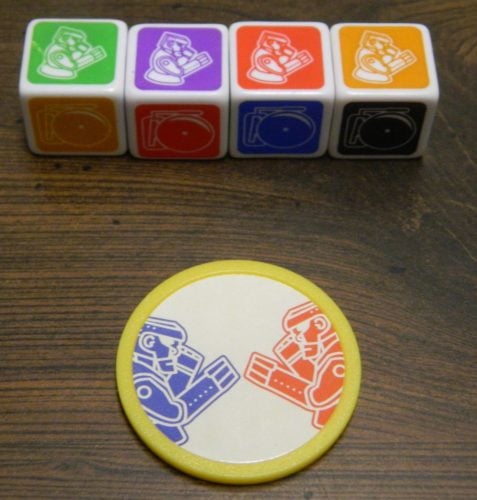 Since the Rock’Em Sock’Em Robots Dice Game is a speed game both players will be rolling their dice at the same time. Players can keep rolling some or all of their dice. The first player to reach the requirement for the round grabs the coin which ends the round.

The player that didn’t grab the coin will have to flip over one of their fight cards. Each fight card will have one of two symbols:

This player has rolled the symbols required to flip back over one of their fight cards.

If neither player has revealed all three of their hit symbols, another round is played.

When a player flips over their third hit card they lose the game.

This player has had all three of their hit cards flipped over. The other player has won the game.

I would say the easiest way to describe the Rock’Em Sock’Em Robots Dice Game is as a pretty generic speed dice game. Two players compete to be the first player to get all of their dice to be the same color or symbol and then grab the coin. The losing player has to turn over one of their fight cards. The first player to turn over all three of their hit cards loses the game. That is basically all there is to the Rock’Em Sock’Em Robots Dice Game.

While the Rock’Em Sock’Em Robots Dice Game has an age recommendation of 7+ I really don’t see why children younger than that couldn’t understand how to play the game. The game is really straightforward. You just have to recognize which dice match colors/symbols and then roll the rest of the dice until they match. That is really all there is to the game. Due to its’ simplicity I actually think the game will appeal more to children than adults.

With the game being so simple the Rock’Em Sock’Em Robots Dice Game is also quite short. Depending on the players’ luck I see most games taking around 7-10 minutes to complete. The only way I could see the game taking longer is if the players keep rolling the combination that lets them turn one of their cards back over. While the game is quite short I think it is to the benefit of the game. The short length allows the Rock’Em Sock’Em Robots Dice Game to work as a filler game. I also think the game would start to drag if it lasted longer than 10 minutes.

Being a speed dice game it shouldn’t surprise anyone that the Rock’Em Sock’Em Robots Dice Game relies heavily on luck. Most dice games rely mostly on luck and when you factor in the speed element there really isn’t much time to think strategically. Basically you roll the dice as quick as possible trying to either get matching colors or symbols. Your success in the game comes down to how fast you roll the dice and how lucky you are in rolling the color/symbol you need. Other than pursuing the color/symbol that you already have the most of, there isn’t anything that you can do strategically to improve your odds of beating the other team.

In addition to rolling the dice, luck comes into play when you have to reveal one of your fight cards. The player that is better at drawing the miss cards has an advantage in the game. A player could lose more rounds and still beat the other player if they draw one or both of their miss cards while the other player only draws hit cards. While this mechanic adds a little suspense to the game, it mostly just adds more luck. With this mechanic the player that rolls better will not necessarily win the game.

I would say there is really only one area where there is a tiny amount of strategy. The ability to flip back over one of your fight cards adds a little strategy to the game. If you are in a round where you have to roll symbols and you already have two of the appropriate symbol it makes no sense not to try to get all four symbols. It becomes a little more interesting when you are rolling for colors though. Basically you have to abandon the main goal of the round but you can gain a big reward if you are successful. I appreciate the idea of the mechanic because it gives players a little more control over their fate in the game.

The problem with this mechanic is that it is way too powerful. Being able to flip back over one of your cards can be really powerful. It basically reverses out one of the rounds that the other player won. It is even more powerful during a round where you are trying to get matching symbols as it lets you get back one of your cards while the other player loses one of their cards. This can totally change the game.

While it is really powerful I wouldn’t have a problem with it if it was actually hard to achieve. If the combination was a lot harder to roll it would add a risk/reward element to the game. You could get a reward for rolling a harder combination but it would also make it easier for the other player to finish before you. The problem is that it is statistically just as easy to roll the bonus combination as any other combination. Honestly I only see two reasons not to pursue this combination. One if you don’t have any cards that are flipped over there is no benefit to pursuing it. Otherwise if you have several symbols or colors you need to win a round it might not pay to abandon those dice in order to pursue the benefit. In every other situation though I don’t see why you shouldn’t try for it.

Another problem that I had with the symbols is that the game could have done more with the concept than it actually does. The dice have unique symbols on every side and yet the symbols don’t do anything other than the players trying to match them. I think it would have been interesting if each symbol gave the winning player a special ability. The Rock’Em Sock’Em Robots Dice Game could have had three different colors and six different symbols. Players could have either chosen to go after the same color or symbol. The color would have been easier to complete but matching a symbol could have given the players a special ability. This could have added an interesting risk/reward element to the game.

I bring this idea up because I think the biggest problem I had with the Rock’Em Sock’Em Robots Dice Game is that there just isn’t that much to the game. There is next to no strategy in the game. It basically devolves into a mindless dice rolling game. Roll the dice and hope you get matching dice before the other player. That is all there is to the game. If you like mindless dice games I think you will enjoy the game but other people will probably be bored by the game.

Before wrapping up I want to quickly talk about the components. The component quality is pretty typical of a Mattel game. While the artwork on the dice is actually pretty nice I am a little worried that it is just painted on. I would have preferred the symbols to be engraved because when they are painted on the symbols tend to fade off after extended use. Once the symbols are faded off there is no way to tell what each side was originally. I also have to bring up the soda/pop can container. I really don’t know what Mattel was thinking making the container look like it was for a beverage. I appreciate that the tin appears to be pretty sturdy but the circular shape does make the game kind of hard to store.

Rock’Em Sock’Em Robots Dice Game is a decent speed dice game. The game is really quick to play and is accessible that no one should have trouble learning how to play the game. The game relies heavily on luck and doesn’t have a lot of strategy though. If you like mindless speed dice games though I think you will enjoy the game. The problem is that there isn’t that much to the actual game. There are very few decisions in the game as it mostly comes down to who rolls the fastest and best. The game tries to add an additional strategic mechanic to the game but it is overpowered to the point where it almost breaks the game.

If you would like to purchase the Rock’Em Sock’Em Robots Dice Game you can find it online: Amazon