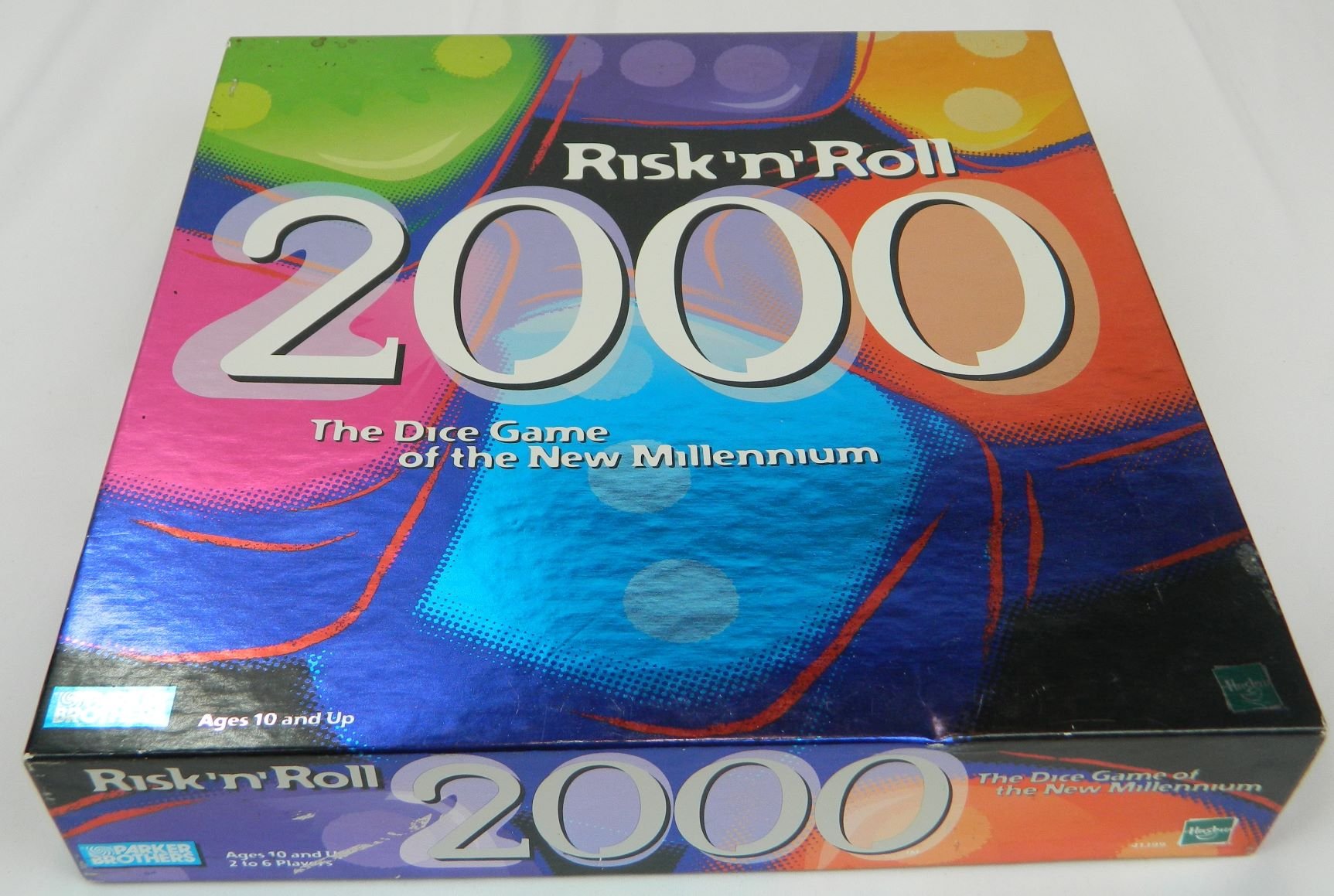 Earlier this week I took a look at the dice game Farkle which has a pretty big fanbase. I thought the game was nothing special as it was easy to play, but relied on a lot of luck. Today I am taking a look at Risk ‘n’ Roll 2000 which I knew from reading the rules took a lot of inspiration from games like Farkle and other similar dice games. While Farkle is still pretty popular to this day, Risk ‘n’ Roll 2000 is a game that got one printing and then it was basically forgotten about. I was kind of curious why that happened, and whether it actually improved upon its inspiration. Risk ‘n’ Roll 2000 is an okay dice game that is easy to play despite its high reliance on luck and borderline broken cards.

To begin your turn you will draw the top card from the draw pile. Each card will detail an action that if you complete it will give you some benefit in the game. You can choose to try and complete the action on the card, or you can choose to ignore the card.

You will then roll the six dice in the dice tray.

If you didn’t roll any scoring combinations (see below), your turn ends immediately. You will score no points for the round. Play then passes to the next player clockwise.

If you rolled one or more scoring combinations you can choose one of two options.

You can choose to end your turn and score all of the points that you earned during the round.

If a player scores with all six of the dice on their turn they have “rolled out”. The players will remember the number of points that the player has earned so far. They will then be forced to roll all six dice at least once more. Any additional points earned from the roll is added to the points already earned. After this roll the player can stop at any time. If the player should fail to roll a scoring combination on any of their rolls though, they will lose all of the points they earned during their current turn.

At the end of your turn you will discard the card you drew at the beginning of your turn.

To score points for any of the combinations below, all of the numbers must be rolled at the same time. You cannot hold dice between rolls in order to create the combinations. The rules don’t specify either way, but I believe you can only use each die for one scoring combination. The number of points that you will score are as follows:

At the beginning of each turn players will draw cards. Each card gives players the following action. When a player successfully rolls out (scores with all six dice) they will add an additional 200 points to their score. They will also choose one other player and subtract 200 points from their current points total. Like a normal roll out though, you will have to re-roll the six dice at least once. If you should fail to score points on a roll, you will lose the benefit of this card. When a player successfully rolls out they will add the points displayed on the card to their current total for the turn. You will still have to roll all six dice like a normal roll out. Should you fail to score any points, you lose the benefit of this card. When you score points on your turn, you will score twice as many points as normal. If you roll out, all of the other players will lose 200 points. You must roll all six dice again like a normal roll out. If you fail to score any points, the card’s benefit is lost. Any two you roll during your turn can be used to score twenty points. Twos can still be used for other combinations like normal.

Once a player has reached 2,000 points, the game enters the end game. The game has a variant rule where you can play to 4,000 points. The game will continue until all of the players have had the same number of turns.

The player who scored the most points will win the game.

Earlier this week I reviewed Farkle. I bring this up because after playing the two games I will say that they are basically the same game. Like Farkle you roll the dice trying to get various combinations in order to score points. You can re-roll the dice as many times as you want, but you can’t use dice from two different rolls in order to meet one of the dice combinations. Each time you re-roll the dice though you are taking a risk. If you should roll dice and not score any points with them, you lose all of the points earned during the entire turn. This is very similar to a lot of other dice games with Farkle being the obvious comparison. The gameplay is basically the same outside of a couple slight changes to the scoring and one other addition that I will talk about later.

As I talked about most of Risk ‘n’ Roll 2000’s gameplay in my Farkle review, I am not going to waste a bunch of time rehashing the same thoughts. Instead I will just give a brief overview of my thoughts on the main gameplay mechanics. If you want a more detailed look, I would suggest checking out the Farkle review.

In general I thought Farkle and the dice rolling mechanics of Risk ‘n’ Roll 2000 to be below average. The game deserves some credit as it is quite easy to pick up and play. The game can be learned in a couple of minutes as none of the rules are particularly complicated. This means that it can be played with children and could be a good family game. It will excel as one of those games that you can just sit back, relax, and play without putting too much thought into what you are doing.

The main problem that I had with the game is that it relies almost entirely on luck. You roll dice and score points based on the numbers you roll. The game has a risk/reward element, but that is pretty much the only strategic decisions you have to make in the game. Unlike games like Yahtzee where you can set aside numbers to score points with future rolls, to score any combination in Risk ‘n’ Roll 2000 you need to roll all of the numbers within one roll. I don’t like this mechanic as it eliminates a decent amount of the game’s strategy. Thus you are mostly just left with a reliance on rolling the right numbers at the right times. This is probably the main reason why I prefer Yahtzee over the dice rolling mechanics in Farkle and Risk ‘n’ Roll 2000.

The biggest difference between Risk ‘n’ Roll 2000 and Farkle is the addition of the cards. Each player draws a card at the beginning of their turn which can give them a benefit for their turn. Some of these score players more points, and others help protect against losing all of your points due to not rolling a scoring combination. Generally I like when games make additions like this. The cards add some variety to the game, and give players a few more things to consider while trying to decide whether to keep rolling or stopping. Most of the cards end up adding to the game’s risk/reward elements. In theory the cards should have made Risk ‘n’ Roll 2000 a better game.

In practice though they don’t. In fact they are solely responsible for making the game worse than Farkle in my opinion. The problem with the cards is that they are far from balanced. Some of the cards are really powerful, while others rarely come into play. In particular No Harm/No Foul, Double Time, and Deuces are the best three cards while the others are usually quite a bit worse. No Harm/No Foul is the best as it eliminates all of the risk from your turn. Just keep rolling the dice and racking up points until you roll a combination that fails to score you points. With the protection of knowing that you can’t lose your points, you will generally score more points. Next is Double Time as it simply doubles your score. You could have a pretty average turn, but by doubling your score you could score more points than someone that actually rolled quite well. Finally Deuces is useful as it makes it much easier to get a scoring combination since half of the sides of the dice will score you points. This allows you to roll for quite a bit longer without taking a big risk. Meanwhile the other three cards basically just give you more points if you roll out which doesn’t happen all that often.

Instead of adding an interesting mechanic to the game, the cards end up just adding more luck to the game. Drawing the better cards will give you a big advantage in the game that will be hard to overcome. A player that only draws the worst cards is going to have a hard time competing in the game. This kind of ruins the rest of the game. Instead of mostly relying on what you roll, what cards you end up drawing could play almost as big of role in deciding who will end up winning. I think the cards could have worked if they were more balanced. The cards being so unbalanced though honestly hurts the game where I wouldn’t even use them.

Normally I would just say to pick up Farkle if you wanted this type of dice game. The only reason why I would maybe choose Risk ‘n’ Roll 2000 is that the components are actually better than Farkle’s. The game’s box is considerably larger which might be a negative for some people. The dice are of a higher quality as they are actually pretty big. The cards are solid even though I would seriously consider not even using them. The best component is probably the dice tray which is quite nice for a game made by Parker Brothers. The tray is quite solid giving you a contained space to roll dice as well as place dice that you have decided to keep. I wouldn’t pay considerably more for Risk ‘n’ Roll 2000 than Farkle, but if you can find them for a similar price it may be worth picking up Risk ‘n’ Roll 2000 just for the better components. If you really want to, you could easily play Farkle with the components anyway.

Ultimately I didn’t think Risk ‘n’ Roll 2000 was a terrible game, but I don’t know if I would call it a good game either. For the most part it is basically the same as Farkle outside of some minor scoring differences. Thus the game is quite quick and easy to play, which is a plus as it will work well as a filler game where you don’t have to put too much thought into what you are doing. This does lead the game to relying pretty heavily on luck though. The strategy is quite limited as most of the decisions come down to playing it safe or taking a risk. The main difference between Risk ‘n’ Roll 2000 and Farkle is the addition of cards. At first glance I thought these could improve the game, but in practice all they do is make the game worse. The cards are so unbalanced where they just add more luck to the game.