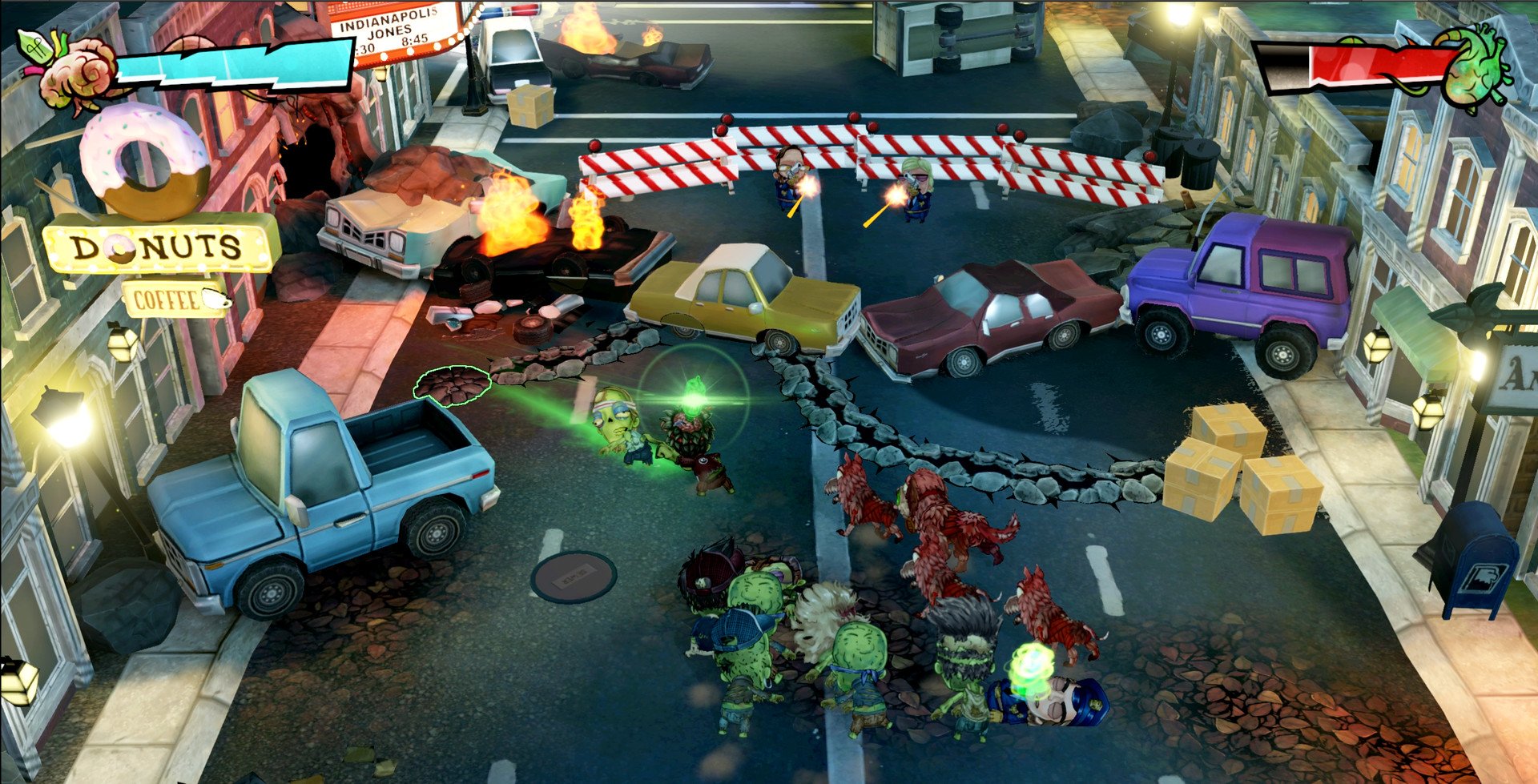 While not a hit financially or critically Stubbs the Zombie in Rebel Without A Pulse was released back in 2005. At this point I don’t remember a whole lot about the game, but I remember really enjoying it back when it was first released. While the game definitely had some mixed opinions from gamers, the game has developed a sort of cult following. So you might be wondering why I am randomly talking about a fifteen year old video game? Well it turns out that several of the people behind Stubbs the Zombie actually made the game that I am looking at today Ray’s The Dead. Ray’s The Dead has been in development for quite a few years. Despite its long development cycle I honestly hadn’t heard about the game until very recently. I was intrigued by the game though as it looked like a really interesting combination of a Pikmin style game with a zombie theme. Ray’s The Dead is an interesting take on the “Pikmin” mechanic creating an engaging zombie game that pays homage to 1980s pop culture.

In Ray’s The Dead you play as Ray LaMorte. The game begins with Ray being raised from the dead by a strange procedure performed by a local scientist. Chaos is breaking out all over town as a strange green substance is making the local citizens go crazy. Ray is pulled by mysterious forces to former key locations from his childhood. The game regularly utilizes flashbacks to retell key moments from Ray’s past and how they correlate to current events. Can Ray save his hometown from impeding doom and regain his humanity in the process?

While it is not a perfect comparison, the easiest way to describe Ray’s The Dead’s gameplay is to compare it to the game Pikmin. In the game you control Ray as he commands a group of zombies.  The objective of each level is to reach the end without running out of health. As the commander of a group of zombies you have the ability to bring humans and dogs back to life as zombies for your army. You can get additional zombies from recently dug graves as well as the enemies that you kill along the way. The commands you can give to your zombies are pretty basic. You have the ability to pull zombies back to your position, and also form a tight group which allows you to run quicker and avoid traps/obstacles. You will also eventually acquire a block ability that allows you to block enemy attacks. The ability that you will use most often though is sending your zombies out to attack. You basically aim your sight line and press the button corresponding to the type of zombie that you want to send. You can use this to send zombies after enemies or to interact with objects in the environment. Each type of zombie in the game has different strengths and weaknesses. Therefore you need to use the right type of zombie for each situation or you will likely lose them quickly. As you progress in the game you will acquire batteries which will give you more power allowing you to perform more actions before you have to wait for them to recharge.

Between many of the missions of playing as a zombie the game flashes back to Ray’s childhood. Outside of building out the character’s backstory, these sections also feature gameplay. These missions play similar to the zombie mechanics except that you obviously aren’t killing people as a child. Instead you are mostly giving commands to your friends, avoiding traps, acquiring goods scattered around the environment, and dealing with the town’s bullies.

For anyone who has played a Pikmin-style game before you probably already have a pretty good idea of what to expect from Ray’s The Dead. In many ways it plays a lot like other games from this genre. The game has a few unique additions, but doesn’t drastically change the overall gameplay. This is not really much of a problem though as the game succeeds because it takes everything enjoyable about this genre and applies a zombie theme. The game is just really enjoyable to play. A decent amount of this is due to the game’s theme (more on this later), but even without it the gameplay would still be quite satisfying. At first the gameplay may seem kind of basic as you think the only gameplay is sending zombies to attack enemies. The gameplay has more depth than that though as there are also some stealth elements. The gameplay in particular really starts picking up when you have a couple different types of zombies that you can control. When you get to this point you can’t just send in zombies without a strategy. Each zombie has their own strengths and weaknesses. To succeed in the game you need to know the right time and zombies to send in to deal with the enemies/situation.

So lets get to the game’s controls. The controls are quite straightforward. You mostly just move around trying to avoid enemy attacks while sending your zombies/humans out to perform various tasks. I thought the game was quite clever in how it handles the different types of zombies. One button is dedicated to each type of zombie. When you press the button the corresponding type of zombie is sent in the direction that Ray is looking. This is straightforward and works well most of the time.

The main problem with the controls is that they don’t always work as well as you would like. This mostly comes from it sometimes being hard to lineup your vision with where you want the zombies to attack. For example it sometimes looks like you are looking at an enemy but since you were slightly off it will send zombies to a random place on the map. The game has some leniency where it will know what you were trying to do. It doesn’t always work though. This mostly just makes it take longer to kill an enemy, but sometimes it leads you to lose zombies that you otherwise wouldn’t lose.

This helps create one of the biggest problems that I had with the game. Generally I would say that Ray’s The Dead’s difficulty is pretty fair. Most of the levels are challenging and yet don’t go so far where it feels unfair. The problem is that one mistake in a level can really hurt you. There are a number of enemy attacks that will immediately kill any zombie that is hit by it. Some of these can cover a pretty large area as well. This is combined with some locations that are pretty cramped making it hard to avoid the attacks. Losing your zombies doesn’t kill you, but it makes it really hard to recover. When you die you will get back all of the zombies you had at the last checkpoint. The problem is that if you lost all of your zombies before the checkpoint you will be left with nothing. For example in one boss fight I might have had a total of one zombie at the beginning. This made the boss fight much more difficult and kind of tedious. The game is smart to give you ways to grow your horde of zombies during boss fights and fights against a lot of enemies, but this can sometimes be pretty hard to accomplish as you will lose zombies just as quickly as you gain them. When you factor in that you will lose large groups of zombies due to the occasional control issue, it feels a little unfair at times that you can lose zombies so quickly.

As for the game’s story and atmosphere it is obvious from very early in the game that it has a heavy reliance on the 1980s. Much of the game takes place in the 1980s and thus the game is filled with a ton of 1980s references and Easter Eggs. For example the game has a whole Karate Kid montage, and Mr. T (Mr. Z in the game) makes an appearance. These are just an example of two of the references in the game. Some of these are a little obvious where it feels like the game is trying to spam as many references into the game as possible in order to appeal to fans of the 1980s. Others are pretty clever though. If you are one of those people that are nostalgic for the 1980s you likely are going to really enjoy this aspect of the game.

While much of the story relies on 1980s pop culture, I was actually a little surprised that the story is a little deeper than I was expecting. There are basically two stories to the game. The present story is basically about an evil corporation/organization that is poisoning citizens for their own nefarious purpose. This is very similar to many movie plots but is still enjoyable. Meanwhile the flashback story is about Ray’s life before he dies and focuses a lot on childhood moments with his friends as they deal with the local bullies. This feels similar to your typical coming of age story from many movies, but I actually thought it was well done. As you progress through the game the two stories start to converge. The story may not be the most original, but I think it works because I found the characters to be interesting.

As for the game’s visual style I think this is another strength of Ray’s The Dead. The game’s style utilizes a mixture of 2D and 3D elements. All of the characters are 2D and appear to be hand-drawn. The character design is really good and looks great. The environments are 3D and look nice as well. This mixture of 2D and 3D elements work really well together as you control the 2D characters in a 3D world. This reminds me a lot of the Paper Mario series and other games that have utilized this style in the past.

Ray’s The Dead has had a pretty long road to get to this point, but it ultimately lead to a pretty good game. Ray’s The Dead’s gameplay owes a lot to games like Pikmin where you have a group of units which you command around to do different tasks for you. Anyone who has played one of these types of games before should already have a pretty good idea of what to expect. It might not revolutionize the genre, but it succeeds at taking everything enjoyable about the genre and crafting them into a really satisfying game. The control are simple and work well most of the time. Zombies don’t always do what you expect them to though which can be sometimes frustrating especially when you end up losing a lot of them to one attack. Outside of the gameplay the atmosphere is quite good with the graphical style working really well. The story does rely on quite a bit of 1980s nostalgia, but it is also deeper than you would expect.

People that have never really cared for the Pikmin-style gameplay probably won’t care for Ray’s The Dead as it relies pretty heavily on that formula. Those who like this genre though and are intrigued by the 1980s zombie theme though should really enjoy Ray’s The Dead and should consider picking it up.