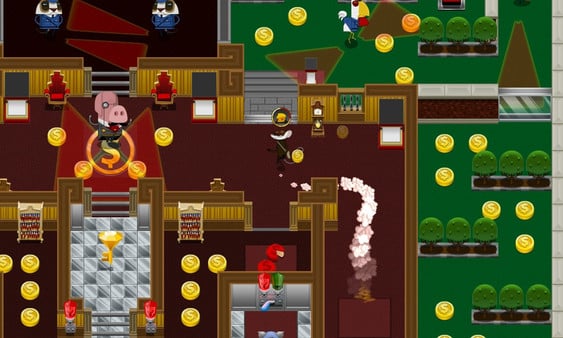 Two years ago a game named Monaco What’s Yours Is Mine was released to critical praise. I played the game (co-op) and enjoyed it quite a bit. The game was a great mix of a action game combined with a stealth game since you needed to quickly move through the buildings but needed to try to avoid alerting the guards. Monaco was a fun game but at times some of the levels were kind of hard and long.

A Race Against the Clock

In Rats – Time Is Running Out you play as a thief that just so happens to be a rat. Your goal is to try and break into different buildings/compounds, steal all of the gold, and the final grand jewel before you run out of time and the authorities arrest you. The game plays like an arcade game where you move around the levels picking up gold as you figure out how to open the path to the jewel so you can steal it and escape the level. While you can just try to get the jewel as quickly as possible you should consider collecting as many coins as possible for a higher ranking on the level and so you have more coins that you can use to purchase the upgrades that you find throughout the game.

While you should try to avoid the guards, Rats – Time Is Running Out is not like Monaco where alerting the guards is always a bad thing. You can always tell when the guards can spot you due to vision cones being present on the screen at all times. If you step into an enemies’ vision cone, they will start chasing you. Since you are faster then them you can usually outrun them and they will eventually give up (except for the pigs). If you are caught by a guard it is not game over though since your thief will always knock out the guards. It takes time to knock out the guards though which will take away precious seconds from the timer. This is a good compromise in my opinion since while a time penalty is big, getting caught is not an automatic game over like in so many other games. This is important since in some levels you just need to start running even if it alerts guards since you are always up against the clock.

It is kind of hard to explain why I liked Rats – Time Is Running Out so much. It is just a fun game to play. The controls are so simple since the only controls you use in the entire game are the directional buttons that you use to move around the level. Every other action in the game is performed automatically when your character reaches the appropriate space.

While the game looks a lot like Monaco it doesn’t play exactly the same. While Monaco has a more slow and methodical pace as you carefully move around to avoid detection, Rats – Time Is Running Out plays more like an arcade action game. Time is key in the game. While it is good to avoid the guards, the most important thing is to move quickly through the building and get out before you are caught. Rats – Time Is Running Out requires less planning and more action. The game rewards you for taking risks instead of taking your time to find the best way to break in like in Monaco.

The tension that develops as you near the end of your time limit is exciting. The game’s music speeds up to notify you that you need to pick it up or you are going to be caught. The designers did a great job giving you just enough time to complete the level even if you made a couple mistakes but also doesn’t give you so much time that you breeze through the level. Unless you have perfected a level you won’t have a lot of time left as you reach the exit. As you grab the final jewel you generally will only have seconds remaining until the authorities arrive. You might not even have any time left as you race towards the exit. Once you grab the final jewel you pretty much need to go into a full sprint towards the exit. Usually you will have multiple guards and sometimes even the authorities chasing you as you head towards the exit. In one level I was caught by the authorities about two or three steps away from the exit and another time I escaped with the authorities just a couple steps behind me.

Another thing I loved about Rats -Time Is Running Out is that the difficulty seems just about right. The first levels are kind of easy but the game does a great job with ramping up the difficulty. The game steadily gets more challenging but it never becomes overwhelming/frustrating. In the later levels you will get caught quite a few times but you can always find something that you could do better in order to shave off some time so you can eventually beat the level. For the later levels you just need to explore the level in order to plan out your route so you can hit all of the important areas as quick as possible. The game never got so difficult that I felt that I wouldn’t be able to finish a level.

As a whole I would say that the game is moderately difficult. You should get a decent challenge out of the game but it shouldn’t be so challenging that you feel frustrated and want to quit. Compared to Monaco I would say that Rats – Time Is Running Out is an easier game especially since failure means a lot less time lost.

Tools of the Trade

In Rats – Time Is Running Out there are two types of upgrades/power ups that you will need to utilize in order to beat the levels.

The first type of power ups are different types of cheese and other pick ups scattered throughout the levels. Each pick up gives you a special ability for a limited amount of time. If you pick up the yellow cheese you run considerably faster for a time. The blue/green cheese makes you invisible for a short amount of time. The white cheese is the most interesting since it adds time to the clock in situations where you normally would lose time (opening doors and knocking out enemies). A good strategy with the white cheese is to get a lot of enemies to chase you so you can use the white cheese and gain a lot of time by beating up all of the guards.

The most important pickups are the clocks though. Each clock picked up adds precious time to the timer and you need all of the time that you can get. The game does a good job spreading out the clocks since they are placed close enough that you don’t run out of time but they are far enough apart that there are a lot of close calls as you pick up a clock as the timer is only seconds from running out of time.

The other upgrades in the game come from finding blueprints in some of the levels. After you grab a blueprint and successfully escape a level with it, you can use some of the money that you have stolen from previous levels in order to build the item from the blueprint. These items give you special abilities that you can use in every level. Some of the special abilities include being able to hide as a typewriter, having coins being attracted to you so you can pick them up quicker, running fast for a short amount of time, and even riding on a rocket.

What I really liked about these abilities is that you don’t have to press any buttons or worry about figuring out how to activate them. The abilities activate themselves whenever the proper conditions have been met. For example the speed ability activates whenever you acquire enough coins in a short amount of time.

While Rats – Time is Running Out is not a long game, I think it is a great value if it is the type of game that you would be interested in. The game includes close to 40 levels with each level taking a couple minutes to complete or longer based on how many times you fail the level. According to Steam I played the game for four hours. In that time I completed all of the levels. I didn’t perfect all of the levels though so the main game could end lasting longer than four hours if you try to perfect each level.

The main reason I didn’t attempt to perfect each level is that it would have taken too long and it wouldn’t have been worth the effort in my opinion. While it is moderately difficult to complete all of the levels, perfecting them will be really hard. Since you need to collect all of the coins as well as complete the levels quickly, in order to perfect the levels you will pretty much have to memorize the levels while also perfecting a path through them. While I really enjoyed the game, I didn’t feel like doing this. If you do though, it could add quite a bit of length to the game.

Outside the main game there are also twelve challenge maps. These challenge maps appear to have the same layouts as some of the levels from the main game with added difficulty from decreased time/more enemies. At this time I really didn’t spend much time with them but sometime in the future I may go back and attempt them. If you played through all of the challenges I would guess that it would add maybe a couple hours to your play time.

What makes Rats – Time Is Running Out such a great value is the original retail price. The game retails at only $5. While the game is not long, if the game sounds interesting to you I think you will definitely get your money out of the game.

When I first saw Rats – Time Is Running Out it reminded me a lot of Monaco an indie game I really enjoyed. While the game shares a lot in common with Monaco, it also plays quite a bit differently since it is more of an arcade action game than Monaco. I was actually surprised by how much I enjoyed the game. What I liked most about the game is that the game is easy to play but also somewhat tense especially as you are racing to the exit as time is expiring.

While I really liked the game, it probably won’t be for everyone. If the concept doesn’t interest you, you will probably not like the game. If you liked Monaco and/or action arcade games, I think you should really like Rats – Time Is Running Out.

Rats – Time Is Running Out