Rat-a-Tat Cat is a 1995 family/children’s memory game from Gamewright that is very simple to learn and play. The objective of the game is to try to get the lowest hand score you possibly can before the round ends.

Each round begins with a dealer being selected. The dealer shuffles the deck then deals four cards (one at a time and face down) to each player. The remaining cards are placed face down in the middle of the table to form the draw pile. The top card of the draw pile is turned over to start the discard pile (unless it is a power card in which case it is placed back in the deck and a new card is turned over). Without looking, each player places their four cards face down in a line in front of them. To begin the round, each player peeks at their two outer cards and tries to remember them (and then turns them face down again). If either of the outer cards are power cards, the player keeps them but they won’t get to use their powers (they only have their powers when drawn from the draw pile). 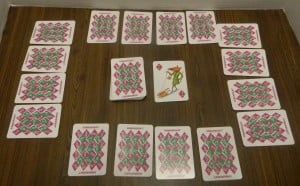 This is an example of how to setup a game of Rat-a-Tat Cat.

After setup, play begins with the player to the left of the dealer. Play continues in a clockwise direction until someone decides to end the round. Each turn, players have two options to pick from. They can either draw the top card from the discard pile (since they are discards they usually won’t be very good) or the top card from the draw pile. If a player elects to grab the card from the discard pile, they MUST use it to replace one of their cards (either one of the two outer cards which they know the value of or one of the two unknown middle cards).

If a player opts to draw the top card from the draw pile, they have the option to use it to replace any one of their cards in front of them or just discard it to the discard pile (if it isn’t a low number). Also, they could end up drawing a power card which they can play to the discard pile in order to use its power. The “peek” power card allows the player to peek at any one of their own cards (so you can see what you have in the middle without having to discard them in case they are actually good).

The second type of power card is the “swap.” A swap card allows a player to swap one of their cards with any card owned by another player. You could give them a card you know is a high number and grab one of their cards you expect to be a low number. However, you cannot look at the card you are giving or the card you are getting (it’s a blind swap). The last type of power card is the “draw 2” card, which gives you the ability to draw one card and decide whether or not you want to keep it. If you don’t like it, you can discard it in order to draw a second card (which you can also decide whether to keep or discard). If you decide to keep the first card, you don’t get to draw the second card. 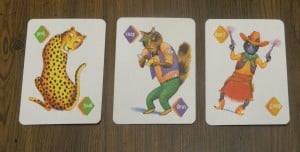 These are the three different types of power cards in the game.

Players need to remember all their known cards and should attempt to replace their high numbered cards with lower ones. They also need to keep track of their opponents and which cards they are discarding (to kind of get an idea of how low their score is). When a player thinks they have the lowest score, they can knock on the table and say “rat-a-tat cat” to end the round at any time (even their first turn if they wish). After a player elects to end the round, every other player gets one more turn.

Once every player has taken their last turn, all cards are revealed. Any power cards that players had in front of them are replaced by drawing from the draw pile. Since you could draw a nine (and really hurt your score for the round), you always want to get rid of any power cards you know you have (since it is quite risky to rely on a random draw). Players add up their four cards and the scores are recorded. A new round then begins which is played in the exact same way. 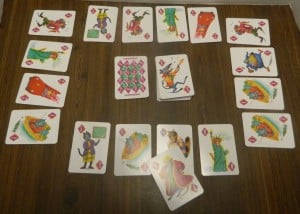 This is an example of how to score a round of Rat-a-Tat Cat after someone has ended it. The bottom player had a power card as one of the middle cards so it was replaced by the top card from the draw pile (a 9). The bottom player’s cards total 18 points, the player on the left has 9, the top player has 10, and the total for the right player is 12. All of these scores are recorded.

Rat-a-Tat Cat gives three different options for ending the game. In each case, the player with the lowest total score over all the rounds is the winner. You can either play for a certain number of rounds, a specific length of time, or until all but one player have hit 1oo points (in which case the player remaining is the winner).

Rat-a-Tat Cat is a little too simple for hardcore gamers but for children and families, it is phenomenal (one of the best family/children’s games I’ve reviewed). Even though I’m an adult and consider myself to be a serious gamer, I actually really enjoyed playing the game and plan to keep a copy in my collection as a quick filler game. However, since there aren’t a lot of mechanics I could see the game becoming somewhat stale and boring after awhile for adult gamers. On the other hand, if you get Rat-a-Tat Cat for your kids, they will probably get hours and hours of enjoyment out of it (and maybe learn something too).

The only problem I have with the game is that it is too easy to remember just four numbers. However, this problem can easily be solved by playing with six or eight cards in front of each player (though you will need two decks to do this since there are only 54 cards included in the game). This would make it much harder to remember all of your cards and require more drawing in order to replace all your bad cards. As it is, all you really need to do is remember one number (like 4,310 if the first card is a four, the second card a three, etc.).

A few more mechanics would have been nice to keep things interesting for adults but I can see why Gamewright didn’t want to make Rat-a-Tat Cat too complicated. Since the game is for kids this is definitely excusable. Since there aren’t many mechanics, the game can be learned quickly and is very easy to play. Most kids (even some younger than the recommended ages of six and up) should be able to learn and play the game quite easily.

Even if a game is easy to play, there is no guarantee kids will enjoy it. However, I would bet most kids will like Rat-a-Tat Cat. The card art is very cute and well-done and should catch their attention. The rounds go by very quickly so the game should keep their attention. This is also a game that kids can be very competitive with adults in (they might even have an advantage if you have a terrible memory like I do).

While Rat-a-Tat Cat isn’t the most educational game out there, it does still help kids learn things and build skills. The main thing the game does is help build memory but it also helps develop some math skills as well. Kids are tested on the order of the numbers (for example, is three a lower number than five) and even some probability (if I take this five card and replace one of the unknown middle cards with it, what are the chances it will help me?).

Rat-a-Tat Cat also scores very highly in the value category. The game retails for about $10 and I can see kids getting hours of fun out of it. I think there’s a better chance that you will wind up having to buy a second copy because the cards got too worn down than of your kids not liking it. Another nice thing about the game is that the box is small (a little bigger than a deck of cards) and very portable. This is the type of game you could play in a car, waiting at the doctor’s office, or just about anywhere else.

It’s pretty obvious I really like Rat-a-Tat Cat as a family/children’s game and would highly recommend it. However, is it a game that adults will enjoy by themselves? While there are definitely some exceptions, I actually think a lot of them would. Since there aren’t a lot of mechanics, it’s probably only a game you’ll dig out every so often as quick filler but it’s enjoyable enough. There isn’t a lot of strategy (you basically just swap out your middle cards and try to draw low cards to replace all of your higher ones) and the game is heavily luck-based (if you don’t draw well you aren’t going to win) but it is a nice simple game to play when you don’t want anything too strategic or are playing with less experienced gamers. The game does include some hidden information (the cards in the middle) and requires some decision making (whether to press your luck to get better cards or end the round early so your opponents can’t build a better hand than you).

I highly recommend Rat-a-Tat Cat for families with young children. This is an almost perfect game for kids which will teach them a few things and build some skills while also entertaining them. The game is very cheap to buy and you should get hours and hours of enjoyment out of it. For gamers who aren’t children, I actually still think it is worth a look. While I doubt hardcore gamers who need a lot of strategy in their games will enjoy it, I actually did like the game and plan to keep it as a nice filler game.

Note, my score of a three out of five is based on how much I actually liked it as an adult and serious gamer (and the grade I would give it for other adults). If you are considering buying the game as a game to play with younger children, bump my score up to a four-and-a-half out of five.