How to Play Pyramid Po-Ke-No

On a player’s turn they can play and/or discard as many cards as they want. When a player plays a card to their board they place it face down on one of the ten different sections. Players place cards on the different sections trying to create the most valuable hand they can for that type. Once a card is placed on the gameboard, the player cannot look at it again. 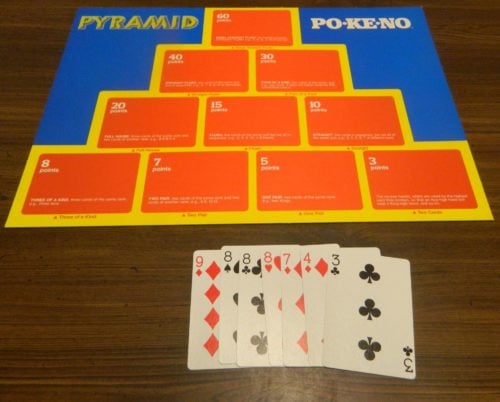 This player has three eights in their hand so they should consider placing them in one of the hands that require at least three of a kind.

Jokers can be treated as any other number but cannot be used in the Royal Straight Flush hand.

When a player has played all of the cards needed for one of the hands, they place a chip on the cards to indicate that the section has been completed. 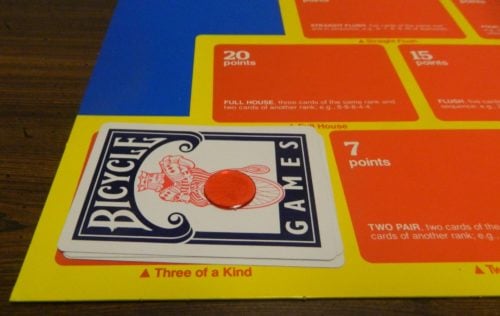 This player has completed their three of a kind hand so they place a chip on the cards.

Once a player has played/discarded all of the cards they want, they draw cards from the draw pile. The player draws cards until they have seven in their hand or they draw three cards total (whichever is smaller). The next player clockwise then takes their turn.

The current round continues until one of two things happen:

Once the round has ended the players score the hands they were able to form. Starting with the “two cards” position, each player reveals the cards that they played in each section. If more than one player completed a hand correctly, the player who used the highest numbered card(s) wins the hand and scores the corresponding number of points. If two players’ hands tie, the players share the points (rounded down).

Three players have completed this hand. Since the jacks outrank the other cards,  the player in the middle will win the points for the hand.

Each section is worth the following number of points:

If none of the players have scored enough points to win, another round is played.

For the single player game you will only use one of the decks of cards. You will have seven cards in your hand at a time. Each turn the player will play/discard three of their cards and then draw three new cards.

My Thoughts on Pyramid Po-Ke-No

As I already mentioned if I had to find a simple way to describe Pyramid Po-Ke-No  I would say that it is Poker mixed with a memory mechanic. Basically the goal in the game is to form the best Poker hands. Players use the cards in their hand and the cards they draw in order to form ten different poker hands. Players will build these hands over several turns though so players have to remember the cards that they placed in each hand to make sure that they create valid hands. This is where the memory mechanic comes into play as players need to try and remember what cards are in each hand that they haven’t completed yet.

If you were really looking for a memory Poker game this might disappoint you but for everyone else I think this is a good thing for the game. I think Pyramid Po-Ke-No has the right amount of memory. It plays a role in the game but you don’t have to remember so many things that you are distracted from the rest of the game. Instead you can focus on forming the best Poker hands that you can.

While I was a little surprised that the memory mechanic didn’t play as big of role as I expected, I was actually a little surprised by the amount of strategy that there is in the game. Most of the decision making in the game comes from deciding which cards you are going to use and what cards you are going to discard. Generally it is not that hard to find the cards necessary to complete the different poker hands. Since the hands are pretty easy to form, it means that for most of the hands all of the players will complete them which leads to the tiebreaker playing a huge role in the game.

I have some problems with the tiebreaker (which I will get to shortly) but it is ultimately one of the biggest driving forces of the game. Without the tiebreaker players would just form each combination with whatever cards they have that would work. The tiebreaker forces players to try to create the strongest combination possible for each hand since each hand is an all or nothing proposition. This makes you think closely about whether you want to go with a weaker hand or wait to try and create a stronger hand. If you go with a weak hand you likely will lose the tiebreaker but if you wait too long you might run out of time and fail to finish the hand. This debate on whether to go with the sure thing or try for something stronger drives a lot of the strategy in Pyramid Po-Ke-No.

The problem with the tie breaking mechanic though is that players will regularly lose a lot of hands because their cards were slightly worse than another player’s. Theoretically you could complete most of the hands and yet still score zero points. Sometimes you will lose a hand because your top card is just one number lower than another player’s. It seems like one player loses most of their tiebreakers every round. This can be frustrating and shows that Pyramid Po-Ke-No relies a lot on luck.

Speaking of luck your fate in Pyramid Po-Ke-No is going to rely pretty heavily on how lucky you are. The player that gets dealt the best cards has a good chance of winning most of the tiebreakers. The jokers in particular are the best cards since they can act as any other card. Other than the jokers the face cards are the most valuable cards in the game. Since they will help you win tiebreakers, players are likely going to use them for the hands that are worth the most points. Since they are so valuable good luck getting a face card after the first time through the draw pile. Players are unlikely to ever discard one of them so the players who are dealt a lot of them have a big advantage in the game.

This leads to probably the biggest problem that I had with Pyramid Po-Ke-No. At times the game is just boring. The problem is that most of the best cards are used the first time through the deck of cards. The players aren’t going to discard good cards so when the discard pile gets reshuffled it is filled with all of the lowest cards. Players then have to try and fill in the rest of their boards using lower numbers. Since these hands are likely to already be filled with high value cards though, you likely won’t score many points from anything you do after the draw pile is reshuffled the first time. This means that around half of each round feels pretty pointless which makes the game drag at times.

As far as how long the game is going to take to play, it really depends on how much you want to play the game. The game recommends playing to 500 points which I personally think is too much. I would guess that a 500 point game would take at least an hour to an hour and a half to finish. If you want a shorter game though all you have to do is lower the number of points you need to score to win the game. Generally in a three player game most players will score 30-60 points each round so you can use that to determine how many points you want to play to.

Finally I want to quickly address the game’s components. There really isn’t much to Pyramid Po-Ke-No’s components. You get two standard decks of playing cards, some chips and four gameboards. The quality of these components are nothing special. The biggest problem is that you don’t really need the actual game to play Pyramid Po-Ke-No. You could easily use any two standard decks of cards and chips to play the game. The only thing you would really need is the gameboards. You don’t really need the gameboards either as you can easily make your own or you could find a way to play the game without even needing the gameboards.

Should You Buy Pyramid Po-Ke-No?

Pyramid Po-Ke-No is not exactly what I originally expected it to be. I initially thought it was going to be a combination of Poker and a memory game. While the game has a memory mechanic it doesn’t play a large role in the game as it is usually pretty easy to remember what you have played unless you start too many piles at the same time. Most of the strategy in the game comes down to deciding whether you are going to use lower valued cards to complete a hand or whether you are going to hold out and try to use higher valued cards. This debate centers around the tiebreaker because only one player can get the points from each hand. You will finish a lot of hands and not score any points from them because one of the other players used higher numbered cards. This leads to the cards you are dealt having a huge impact on how well you do in the game. Since lower cards will rarely win you a hand, the second half of most rounds don’t really matter which leads to the game dragging from time to time. There is also the fact that you can easily make your own version of Pyramid Po-Ke-No.

If you don’t really care about Poker, Pyramid Po-Ke-No is not going to be for you. If you like Poker your enjoyment will mostly come down to whether you think the premise behind the game sounds interesting. If it doesn’t sound that interesting to you, I don’t think Pyramid Po-Ke-No will be for you. If it sounds interesting to you I think you will enjoy it. Whether you want to purchase a copy of the game or make your own depends on whether you want to save some money.

If you would like to purchase Pyramid Po-Ke-No you can find it online: Amazon