While the puzzle looks hard, it is not as hard as you would expect. The reason the puzzle is easier than expected is due to the fact that the puzzle ends up creating a cube. Since the puzzle is a cube you are able to sort the pieces which helps when assembling the puzzle. Flat edges have to be on the outside while curved surfaces have to point towards the center of the cube. Each puzzle piece you place makes it easier for you to place the next piece. (See below for my strategy on how to solve the puzzle.) I would say that the puzzle took me around 15-30 minutes to complete. It would have been quicker if I had known that my copy was missing one of the pieces since I ended up wasting time trying to find the piece that was missing.

Overall I found the Executive Mental Block puzzle to be decent but it was a little too easy. I did have fun putting the puzzle together but I wouldn’t put it together again.

How to Solve Executive Mental Block

The second factor that helped me solve the puzzle the the color of the flat surfaces. Four of the sides are a lighter color while two sides are a darker color. Since the colors stay consistent the darker sides go together as do the lighter sides.

With this knowledge I began by building one side of the cube. Once I had completed one side, I set that side face down on the table and then started building up one of the other sides using the pieces already placed. Each side gets progressively easier to build since there are less pieces to look through and you can use the pieces already placed in order to help you figure out what piece you need to find next. After you have built up the bottom face and three or four of the vertical faces, you then need to place the two center pieces (the two pieces with no straight sides). These two pieces were actually the hardest to place since they are shaped weirdly so you will need to use some trial and error to find their correct location. Once you have all of the vertical sides up as well as the middle pieces, you just need to fill in the top pieces which are quite easy since you have a lot of information about the pieces based on all of the pieces that were already placed. 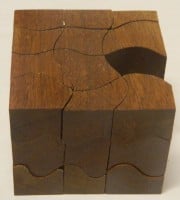 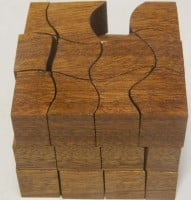 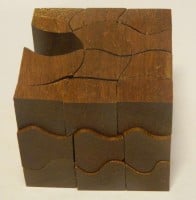 this was fun to me but I really enjoy any type of puzzle.not hard it took me about 30 mins. to complete it thought it would be fun at a party. Thank you! Lots of fun and put my brain in a different zone.Instruction sheet was torn that had the average times on it if you have that could I possibly get that e-mailed to me at the address below. Again thanks for the fun!

Unfortunately I got rid of my copy of the puzzle after completing it so I am unable to help you. I am sorry that I couldn't be of more help.