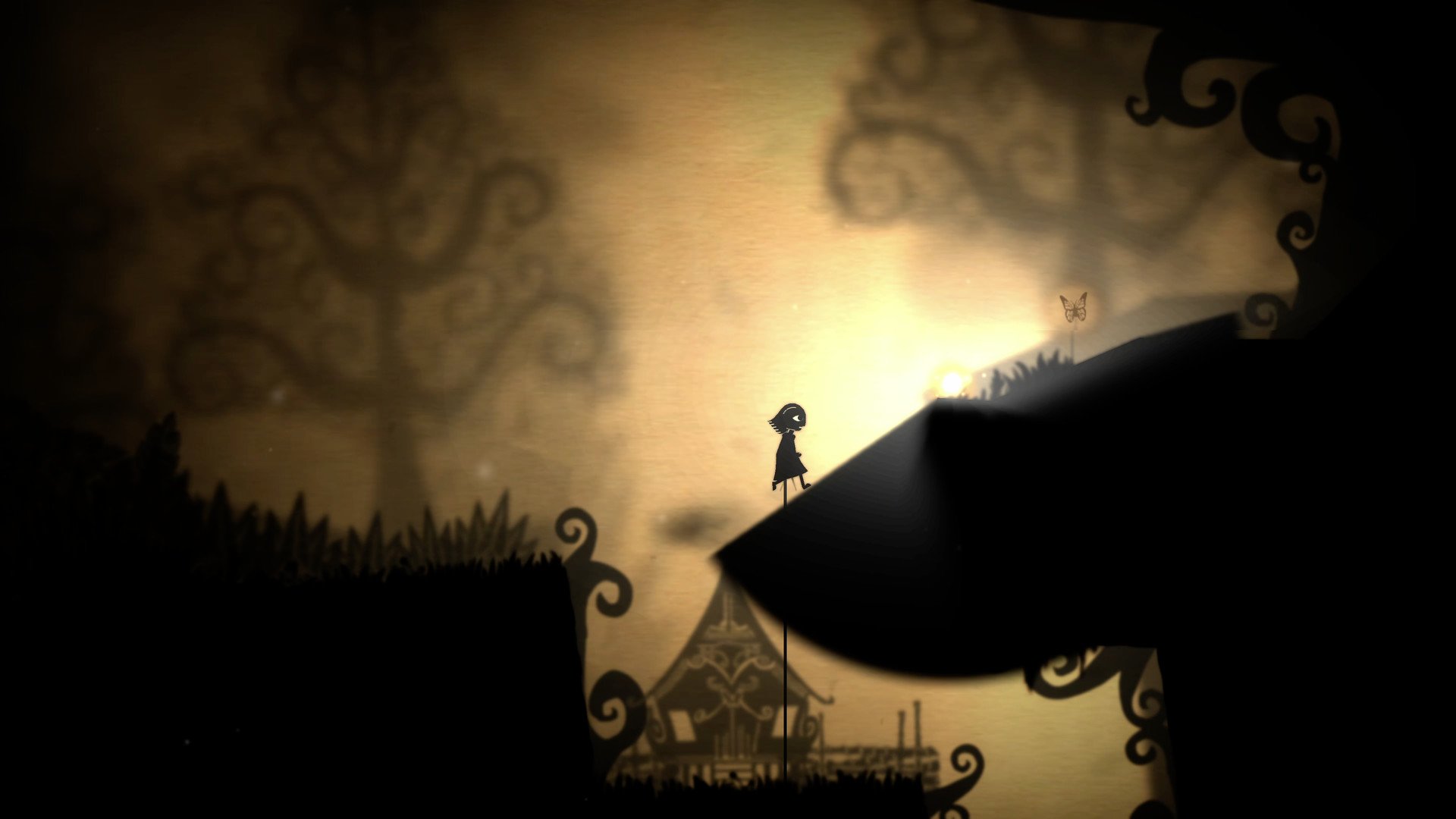 Any regular readers of Geeky Hobbies will know that two of my favorite genres are platformers and puzzle games. Therefore whenever I get a chance to check one out I generally try to as I tend to enjoy most of them. From this genre the games that I tend to enjoy most are those that actually try to do something unique. This is what initially intrigued me about Projection: First Light as the premise was actually pretty interesting. The game is built around a world of shadow puppets where you have the power to create your own shadows. This sounded like a really unique idea with the potential for some really interesting puzzles. Projection: First Light does a fantastic job melding the theme and gameplay to create a truly interesting and fun puzzle platformer.

In Projection: First Light you play as Greta. Greta lives in a mythological shadow puppet world. After causing trouble in her town she is grounded by her parents. Greta decides to run away from home and go on a journey that spans the globe. On her journey she encounters legendary heroes from the cultures she explores and needs to help them in their troubles. Can Greta complete her journey around the world and finally find her way back home?

If I were to describe Projection: First Light I would say that it feels a lot like a 2D puzzle platformer. The 2D platforming mechanics are pretty generic. You basically jump between platforms, and carry pots and boxes to give you small platforms to jump on. You use the left analog stick to move Greta left and right. There is also a jump button and a button that picks up or interacts with things in the environment. If you have ever played a 2D platformer before you should know exactly what to expect.

What makes Projection: First Light unique comes from a source of light that you get access to early in the game. The game’s world is built entirely around shadows as your character can jump and walk on them. This is where the source of light comes into play. You use the right analog stick in order to move the source of light. You have almost complete control over how you move the light as long as it stays close enough to Greta that is is not pulled towards her. The purpose of the light source is to use it to create your own shadows. When you place the light over a solid section of the world it will create a shadow in the direction that the light is shining onto the object. These shadows can be used to create ramps, platforms, or even as a way to raise Greta to a higher level.

As a fan of games that utilize unique new mechanics I was really intrigued by this aspect of the game. There have been a number of different video games that have utilized shadows. Most of them use the shadows more for the setting/atmosphere as they usually don’t have a big influence on the actual gameplay. This is not the case in Projection: First Light as the shadows are easily the most important mechanic in the entire game. To succeed in the game you need to learn how to use the light to create shadows in a way that will help you progress. It takes a little time to learn how to position the light to create the shadows that you need. Once you learn the basics though it becomes almost second nature to create a shadow in order to help Greta make progress in her journey.

This mechanic makes the game. The mechanic itself is actually really easy to utilize and it is quite clever. All you need is a general idea of how to create a shadow in the direction you want and you are set. For much of the first location the shadow mechanics are kind of basic. Because of this I actually thought Projection: First Light started out a little slow. The game is still fun, but for much of the first location you are mostly just creating ramps and platforms to jump across small gaps. I am guessing this was mostly done in order to familiarize players with the shadow mechanics as it somewhat acts like an extended tutorial.

Starting towards the end of the first/start of the second location the game really starts to open up the possibilities for the mechanics though. While you will still be using shadows to create ramps and platforms, there are other ways to use the mechanic. You will use the shadows to manipulate other objects for one. The game also adds more timed elements where you need to quickly use the shadows to create a path. There are a number of other mechanics that are introduced as well. This is where the game really starts to shine. The idea of building an entire game around manipulating shadows was clever and it is actually implemented really well in Projection: First Light.

The only real concern that I have with the mechanic is that it can be a little finicky at times. I attribute this mostly to the fact that the shadows are dynamically created. What I mean by this is that the shadows will change based on any small movement you make in the light source. On the positive side this gives you a lot of control over the shadows you create. Many of the puzzles only have one real solution, but there is some leeway in how you form the shadows as you rarely need to create the perfect shadow. This does occasionally create some problems. Greta can occasionally get stuck in a shadow where she is unable to move. Other times she is pushed in strange directions that don’t always make sense. These issues are usually pretty minor as you can fix them just by altering the shadow. It does become a little frustrating at times though.

As for the game’s overall difficulty and puzzle design it really depends on the type of player that you are. In the game there is the main path that you have to follow for the story. If you stick to the bare minimum I thought Projection: First Light was pretty easy. Many of the puzzles on the main path were kind of easy as the puzzles are pretty straightforward and thus easy to complete. To present more of a challenge as well as more gameplay there are a lot of butterflies scattered around each location. These butterflies seem to be optional. They are responsible for some of the most challenging parts of the game though. Some of the butterflies are still pretty easy to collect, but there are a lot of them that present a real challenge. Some of them require some trial and error while others require you to have a good grasp of how to utilize the mechanics. If you want a real challenge I would highly recommend checking them out. They easily are some of the best puzzles in the game.

On this topic how many butterflies you pursue is going to play a big role in how long the game takes. If you only do what is necessary to progress the game it is likely to take considerably less time than if you try to collect all of the butterflies. I haven’t finished the game yet so I can’t give you a definitive length. That said I am genuinely surprised by the length at this point. If you pursue most or all of the butterflies you will get quite a bit more time out of the game than you would typically expect from these types of games.

Let’s move onto the game’s atmosphere. This was actually one of the main things that initially intrigued me about Projection: First Light. The idea of building a game around shadow puppets was actually quite clever. For the most part I thought the game did a really good job utilizing the theme along with the mechanics. It really feels like the developers first thought of the shadow puppet theme and then built gameplay around it. For the most part I thought the shadow puppet art style is really good. There are some parts of the game that look really stunning.

The only minor issue that I had with the overall atmosphere was the fact that the story is not always the easiest to follow. I would say that most of this is due to there being no dialog in the entire game. Thus the story is told through characters’ actions and the occasional speech bubble that doesn’t include any words. The basic storyline is pretty easy to follow. Some of the individual stories are a little harder to follow though. I think part of this has to do with each location having a story featuring a hero from that location. If you are not familiar with that particular story/legend it is considerably harder to follow what is going on. I applaud the game for bringing stories from around the world together in the game. I just wish it was a little easier to follow at times.

I genuinely enjoyed playing Projection: First Light. I was initially intrigued by the game as I thought the idea of utilizing a shadow puppet theme was really interesting. Many of the platforming mechanics are similar to pretty much every other 2D platformer. Where the game really distinguishes itself is with the shadow mechanics. You basically use a source of light to create shadows to interact with your character or the environment in general. At first the game plays it a little safe with the mechanic as it repeats some basic maneuvers in order to familiarize yourself with the mechanics. Towards the end of the first location though the game really starts to open up the toolbox giving you quite a few more ways to use the mechanics. If you just do the bare minimum in order to progress, the game can be kind of easy and the puzzles are somewhat basic. If you go after the butterflies though the game really starts to challenge you as you have to use the mechanics in unique new ways. Once you get used to them the mechanics are quite satisfying. In addition to the gameplay it does a good job with the shadow puppet art style as it really works with the rest of the game. The story is a little hard to follow at times due to there being no dialog, but I applaud it for combining stories from around the world.