Normally a game like Piranha Panic wouldn’t really interest me. The game was clearly made for children as it has a recommended age of 5+. In many ways the game looked like your typical children’s game as it seemed similar to pretty much every other roll and move game. For these reasons I wouldn’t normally even consider giving the game a chance. There was one thing that really intrigued me about the game though. The gameboard gave me a strong vibe of Plinko which I thought was kind of a clever mechanic to be used in a children’s game. Piranha Panic has a really interesting mechanic that showed a lot of potential, but there is unfortunately not much else to the game.

How to Play Piranha Panic

To begin each turn the current player will roll the die. What they roll will determine what they can do on their turn. 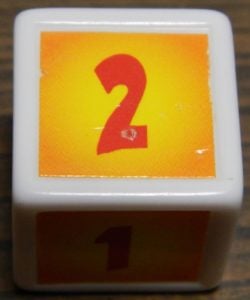 Number: If a player rolls a number they will get to move one of their marbles the corresponding number of spaces. Each marble will start at the bottom of the board as players try to move their marbles to the top of the board. When moving a marble it can be moved forward, left, or right. A marble cannot be moved diagonally. A marble can also not move through a space occupied by another marble. 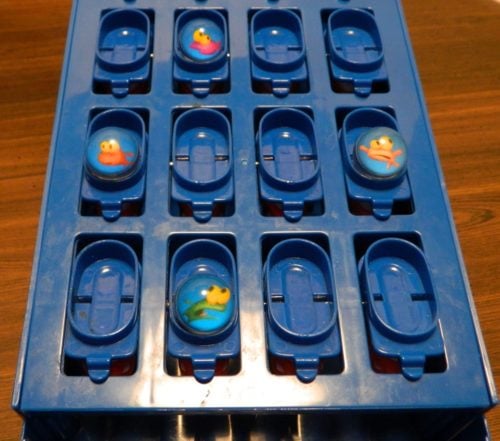 The green player has rolled a two on the die. If they want to move their fish that is already on the board they can only move up and right/right and up or two right as otherwise they would run into one of the other marbles. Otherwise the green player can add another of their marbles to the gameboard and move it to the space to the left of the orange fish.

When a marble reaches the top of the board (doesn’t have to be by exact count) they will be safe for the rest of the game. I am not sure if the piranha zone space counts as a space that you have to move through as the instructions say “jump your fish marble over the piranha zone and dive into the safe area”. 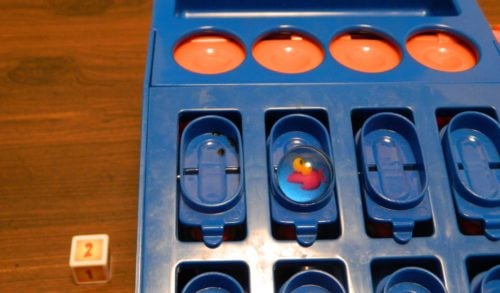 The purple player rolled a two so they will move their marble into the safe zone. 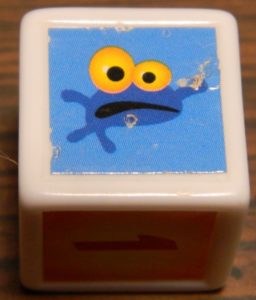 Blue Fish: When a blue fish is rolled nothing happens. It basically counts as if the player rolled a zero. Play will immediately pass to the next player. 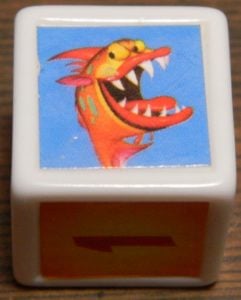 Orange Piranha: When a piranha is rolled the player will roll the die again to determine what happens. 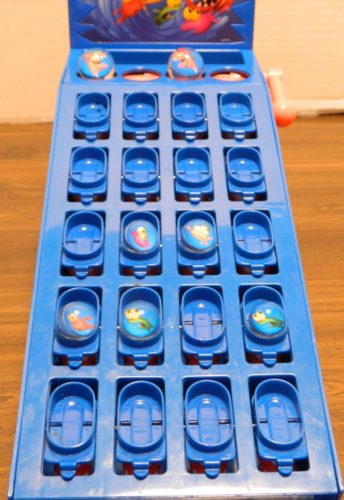 After rolling a piranha the player rolled a two. They placed two of the piranha marbles at the top of the gameboard.

After the player has placed the piranha marbles they will push down on the lever which will release the marbles. The piranha marbles will travel down the gameboard flipping over some of the spaces. Any player marbles that are knocked down into the tray will have to restart their journey from the bottom of the gameboard. All spaces that are flipped over are reset to the blue side so the game can continue. 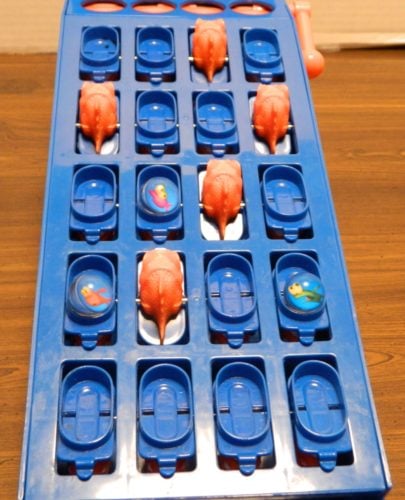 The piranha marbles were released and flipped over a number of spaces. Any marbles that were knocked into the tray will have to restart from the beginning. Before rolling the die again all of the piranhas will be flipped back.

The first player to get all three of their fish marbles to the safe zone wins the game. 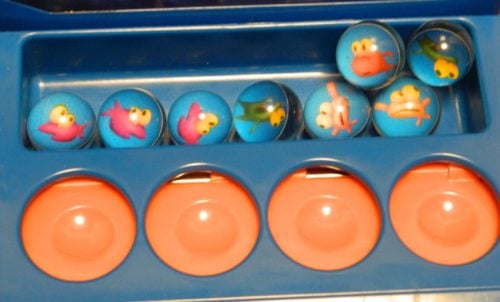 The purple player has gotten all three of their marbles to the safe zone so they won the game.

My Thoughts on Piranha Panic

On the surface this might sound kind of stupid as which marbles are knocked down relies almost entirely on luck. It seems like some spaces are hit more often than others, but there is no way to tell how the marbles will bounce along the bottom of the gameboard. Despite this it is hard not to admit that the mechanic is still kind of satisfying. Placing the marbles at the top of the gameboard and then releasing them to cause destruction down the board is quite fun. In some ways this mechanic kind of reminds me of Plinko. The mechanic is far from deep, but I found it to be surprisingly satisfying. I actually thought this mechanic showed potential.

Unfortunately there is pretty much nothing else to the game. Dropping the piranha marbles are the highlight of the entire game. Even this mechanic relies entirely on luck as there really is no strategy to where you move your marbles or place the piranha marbles. This wouldn’t have been a big problem if there was more to the game though. The game was obviously made for children so the game couldn’t be too complicated. Everything else about the game can be found in pretty much every other children’s game though.

At its core Piranha Panic is a roll and move game. You roll the dice and take the corresponding action. Because of this there is really no strategy to the game as you can’t really make any meaningful decisions in the game. In fact the only decisions in the game come down to how you move your own marbles and where you place the piranha marbles when you drop them. Movement in the game is pretty simple. You can either choose to move your marbles that are already on the board closer to the finish or add additional marbles to the board. Usually you are better off just trying to get your marbles to the safe zone, but in some situations it may be better to have more marbles on the gameboard. The right decision on any given turn is usually pretty obvious.

This means that Piranha Panic otherwise relies entirely on luck. What you roll will ultimately determine how well you will do in the game. You are usually best off rolling high numbers as this will allow you to move your marbles closer to the finish. In some situations it may be good to roll the piranha if you are able to take out a lot of the other players’ marbles. The worst by far is the fish symbol which is completely worthless unless you roll it after rolling a piranha. I think it is stupid that you can roll a symbol that just makes you skip your turn. This just artificially lengthens the game while adding in more luck. I honestly think you should house rule this symbol allowing players to re-roll the die unless they roll it after rolling a piranha.

With most of the gameplay boiling down to rolling a dice and taking the corresponding action it shouldn’t come as much of a surprise that the game is really easy to play. The game has a recommended age of 5+. Outside of younger children possibly putting the marbles in their mouth I could see even younger children being able to play the game. The mechanics are just so simple that I don’t really see anyone having too many issues with it. The game could literally be taught within a minute or two. Unless players keep getting sent back to the start the game will also play pretty quickly. I would guess most games could be finished within 10-15 minutes.

Piranha Panic was obviously made for children and I think they are who will enjoy the game the most. With the game relying almost exclusively on luck there isn’t a whole lot in the game for adults. The gameboard mechanic is kind of cool, but there really isn’t anything else to the game. I think younger children will be able to look past the fact that the game relies almost entirely on luck. The game is really easy to play so they should have no trouble playing it. I think children will also find the gameboard to be really cool. While I don’t see the game really appealing to adults, I think younger children could really enjoy the game.

The components are probably one of the game’s greatest strengths. I already mentioned that I thought the gameboard was pretty cool. The gameboard is really easy to setup and it works well most of the time. It does seem to favor some spaces over others at times. A way to fix this is to push down on the lever quickly which launches the marbles quicker making it easier to knock down marbles. The marbles are pretty nice. The die is pretty much your typical plastic dice with stickers on each side. The components aren’t fantastic, but they are pretty much what you would expect out of a 2000s Mattel game.

Should You Buy Piranha Panic?

In many ways Piranha Panic is a game with a kind of cool mechanic surrounded by pretty much nothing else. The Plinko like mechanic of sending marbles down the board knocking players marbles back to start is interesting. I actually think it had some potential. The problem is that there is literally nothing else to the game. You just roll the die and take the corresponding action. The few decisions that you get to make in the game are really obvious. Thus the game relies almost entirely on luck. Unless you have nostalgia for the game I see no reason why adults would get much out of Piranha Panic. I could see younger children enjoying it though as it is simple to play and I think they will really enjoy the gameboard mechanic.

Game of the Generals (AKA Salpakan) Review and Rules
Click here to cancel reply.