Having played around 500 different board games, I have played enough board games that I can usually get a pretty strong indication of how much I will like a board game based on reading the instructions. There are the occasional games that surprise or disappoint me but most games end up being basically what I expected them to be. After looking at how silly the box makes the game look and after reading the rules I didn’t have high expectations for Pictionary Bend-A-Clues. I can honestly admit that the only reason I even picked up the game was that I found it for around $0.25 at a thrift store. While Pictionary Bend-A-Clues is far from a great game, I was actually quite surprised by it.

How to Play Pictionary Bend-A-Clues

Divide into two teams. Shuffle all of the cards and place them in the center of the base. Place both flexible tubes within reach of both teams.

Throughout the game the players from both teams will rotate being the “picturist”. Before the picturist chooses a card, their team chooses one of the colors (blue, green, orange, red, yellow) to determine which word on the card they will use for the round. Teams cannot choose the same color in consecutive rounds. 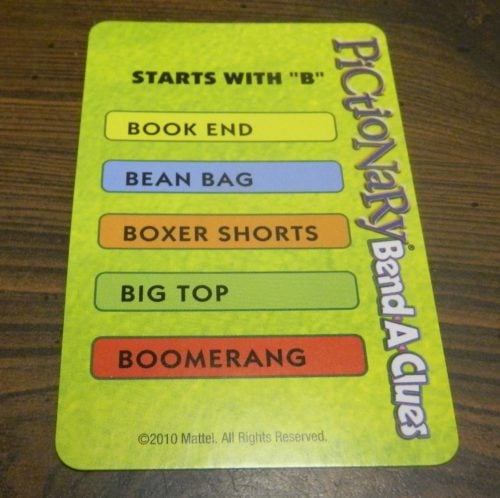 The picturist will then draw a card and read the category on the top of the card to all of the other players. The sand timer is then turned over and players need to use the flexible tube(s) to act out the word on the card. Players can use the tubes to create the object and can also act out a scene using the item they created with the tubes.

This player’s word was boomerang so they bent the flexible tube into their best interpretation of a boomerang.

Players can do whatever they want when they are the picturist as long as they don’t break the following rules:

If the player’s team guesses the word before time runs out, the team gets to keep the card. If they couldn’t guess the word in time, the card is put back into the base. Play then passes to the other team.

Whichever team is the first to earn five cards wins the game.

My Thoughts on Pictionary Bend-A-Clues

At this point a lot of people are probably thinking that I am crazy since I actually think Pictionary Bend-A-Clues is a solid game. If is far from great but I actually enjoyed the game considerably more than I was expecting. Before playing the game I thought it was going to be a 1-2 star game since just by looking at the box it does look a little silly/stupid. I guess Pictionary Bend-A-Clues is one of those games that you can’t judge based on its’ cover.

If I had to compare Pictionary Bend-A-Clues to other games I would say that it kind of feels like a combination of Pictionary and a game like Charades where you have to act out a word. The game actually plays a lot like Charades except that you can use the flexible tubes in order to make props. For some words though you are best off trying to create the item itself which kind of feels like a three dimensional version of Pictionary. While I have never been a big fan of Pictionary (mostly due to not being a good artist), I honestly think Pictionary Bend-A-Clues compares pretty well with normal Pictionary.

While there are going to be some adults that hate the game (which I will get to shortly) I actually see Pictionary Bend-A-Clues being a game that can be enjoyed by the whole family. I will admit that kids will probably get more enjoyment out of the game than an adult would. Adults can still have fun with the game as long as they don’t take it too seriously. While it is far from one of my favorite games, I actually enjoyed the game quite a bit more than I was expecting.

One thing I was a little surprised by was that the game actually requires more skill/creativity than I was expecting. While quite a few of the words have an obvious way to approach them, some of the words require some outside the box thinking. You thankfully don’t have to draw like Pictionary but you need to be creative in using the tubes since you aren’t going to be able to create highly detailed objects with the tubes. Therefore you need to figure out what you think will get the other players on your team to guess the correct answer.

Other than being quite silly, the other issue with Pictionary Bend-A-Clues is that the words on the cards are far from balanced. Now this wouldn’t be a huge issue if there were different difficulty levels but the hard words seem to be randomly placed on the cards. You don’t have the choice on whether to choose an easier or harder word. For an example lets use two words from the game that I played. First there was the word necklace which just required the player to make a loop and put it around their neck. This was guessed within ten seconds. Another word was glove compartment. While not impossible to guess, no one can tell me that necklace and glove compartment are of an equal difficulty to act out with a plastic tube.

The problem with the wildly different difficulty is that the game can be decided just as easily by which team gets easier words than which team was better at the game. While the game is not meant to be taken seriously, I think the game would have been better served if there were different difficulty levels and players could score more points if they were able to successfully guess a more difficult word. While the difficulty may balance out over several rounds, I don’t like that the game can be decided by which team was luckier and got easier words.

As far as the game’s components I am both impressed and disappointed at the same time. The bendable tubes actually work better than I was expecting. There are obvious limits on what you can make with them but they are long and flexible enough that with enough creativity you should be able to make anything that you can think of for a word. The problem with the tubes though is that they tend to get crinkled to the point where they can’t be fully scrunched up. This doesn’t affect the gameplay a lot but eventually the tubes could get messed up enough that it could mess with the game. The game only comes with 100 cards but that does include 1,000 words though so you can play the game quite a bit before you will have to repeat words. Finally I think the timer gives you too much time since if you are going to guess a word you are probably going to guess it pretty quickly and the extra time is rarely going to help you guess a word.

Should You Buy Pictionary Bend-A-Clues?

If you don’t like silly games that can make you look like a fool, Pictionary Bend-A-Clues won’t be for you. If you have children who like silly games though and you don’t mind making fun of yourself, you might be surprised by how much you enjoy Pictionary Bend-A-Clues. If you are at all interested in the game and can find the game for cheap it may be worth picking up.

If you would like to purchase Pictionary Bend-A-Clues you can find it online: Amazon