In the past I have looked at some old board games. While some really old board games are still classics to this day, most older board games have not held up well to time. I attribute this mostly to the board game industry changing quite a bit especially in the last 15-20 years. Designers have taken inspiration from older games and found ways to improve on them. Tastes in board games have also changed over time. More modern games have added additional decision making while still remaining simple to play. These are some of the reasons why I didn’t have high expectations for Perquackey. Perquackey holds up better than I was expecting but it is still a very generic word game.

Place the dice and dice cup on the table. Set aside the red dice for later. Each player takes a black die and rolls it. The player who rolls closest to the letter “A” will start the game.

To begin the game players will only roll the ten black dice. If the roll has no vowels the player is able to roll again. The timer is flipped over and the round begins.

The current player uses the face up sides of the dice to form different words. Words must be at least three letters long. The player arranges the dice and then announces the word they formed. If the word is correct the player to their right writes down the word. For a word to count the following rules must be followed: 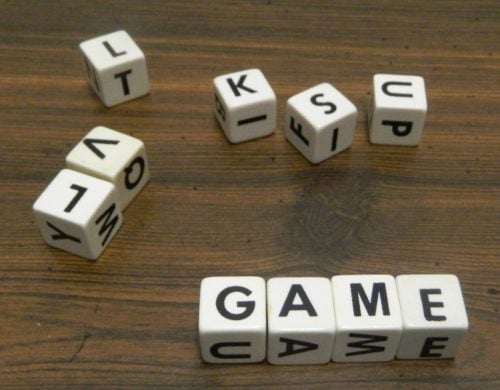 This player has used the letters to form the word Game.

During a round a player is only able to create five words for each word length. When a player has created five words of the same length the player keeping track of the words notifies the current player.

When the timer runs out the game proceeds to the scoring phase.

When a player’s turn ends they will score points based on the number of words they formed for each word length. The following chart shows how many points are scored:

Players can also score bonus points if they get five words from two consecutive word lengths: 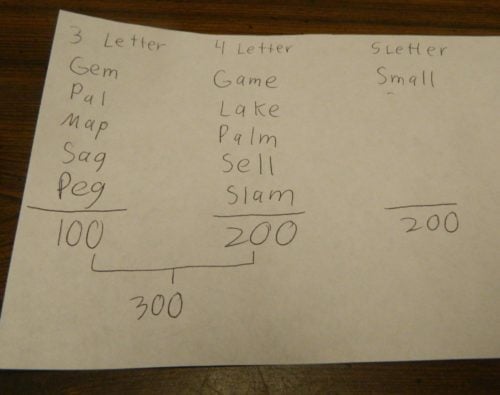 When a player reaches 2,000 points they will become vulnerable for the rest of the game. When a player becomes vulnerable they get to use the red dice on their turn. The player is no longer allowed to form three letter words though. 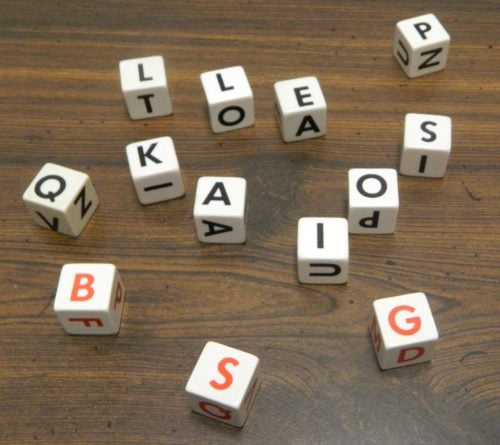 This player has become vulnerable so they will get to use the three red dice.

The first player to score 5,000 points wins the game.

Before I get into details about Perquackey I would like to first say that I have never been a huge fan of the word game genre. I don’t hate word games but they also are probably one of my least favorite board game genres. There are several reasons why I don’t love the genre. First I wouldn’t consider myself to be great at the genre. Simply put I won’t be winning a Scrabble tournament anytime soon. My biggest issue with the genre though is the fact that very few games in the genre do something original. While there are your occasional Word on the Streets, most word games seem to be fine with creating another game where you spell words while testing your vocabulary. I just expect more out of a word game.

The lack of originality brings me to Perquackey. Perquackey gets a little break when it comes to originality since it is older than most of the games from the genre. Perquackey is still a very generic dice rolling game though. Like so many other word games your goal in Perquackey is to use the letters you roll in order to form words which will score you points. Even the fact that you use dice is not that original since Ad-Lib Crossword Cubes, Boggle, and Spill and Spell are just three word games that also use letter dice. Basically if you have played a dice word game before you already know what to expect out of Perquackey.

So the basic mechanic of forming words out of the dice you roll is far from original. Perquackey does have a couple areas where it slightly differs from other games though.

First the scoring in Perquackey does differ a little from other games. Perquackey only allows a player to form five words of the same length. A lot of games don’t have this restriction which allows players to form as many short words as they want in order to score more points. What is unique about Perquackey is that it rewards you for finding five words from two consecutive word lengths. These bonuses can be quite significant. While you can score more points forming longer words, with the bonuses it pays to quickly find your five three and four letter words in order to receive the bonus.

The other unique mechanic in Perquackey is the idea of being vulnerable. After you score 2,000 points you enter the second phase of the game. The second phase gives you access to three more dice. These dice can be really helpful since three more letters gives you a lot more options. There are drawbacks when you reach this part of the game though. First you can no longer form three letter words. While three letter words are not that valuable, they are easy to form which makes it pretty easy to get the first bonus points. The other problem is that you have to score a given amount of points in a round or you are going to lose points. Experienced players probably don’t have that many issues getting 500 points but it isn’t always easy to reach that level if you don’t play a lot of word games.

Basically Perquackey is what you would expect out of a generic word game. The game is quick and easy to play. The only difficulty comes from the players spelling skills and vocabulary level. The game itself is not hard to play but you might not be very good at the game if you generally struggle with word games. Like every other word game, players with the largest vocabulary that are good at seeing words in random letters are going to have a huge advantage in the game. If the players aren’t of an equal skill level I see the best player almost always winning the game.

Other than Perquackey not being highly original, there were some other issues I had with the game.

The first problem that I had with Perquackey is just that the game relies on quite a bit of luck. Like most dice rolling games, one player can benefit from rolling better than another player. Getting a better combination of letters can give a player a big advantage in the game. Some letter combinations will give players more options than other combinations. I think the more skilled player will usually win but better luck could help a player win who otherwise wouldn’t have won.

Another problem that I had with Perquackey is the fact that the game has a lot of waiting around for the other players. While one player can write down the responses of the current player, the other players have to basically just sit around waiting for their turn. With each turn taking three minutes, if you play with more than two players you will spend more time sitting around waiting for the other players than you will actually playing the game. This is why I would recommend only playing Perquackey with two players.

The biggest problem that I had with waiting around for the other players is the fact that I don’t really think it is necessary. I honestly don’t see why you can’t play the game where all of the players play at the same time. One player will roll the dice and all of the players will then use the same letters. Each player will write down their own responses and at the end of the round the players can verify the answers. I actually think this would be a better way to play the game for two reasons. First no one will have to wait around for the other players. Second this variant actually reduces the reliance on luck. Since all of the players will use the same letters, a player can’t benefit over another player by rolling better.

The biggest complaint I have with the game though is that I just found it to be kind of boring. As I have already said, I am not a huge fan of the word game genre. I wouldn’t say that there is anything terribly wrong with Perquackey and it actually holds up pretty well for its’ age. The problem is that it doesn’t really do anything that catches your attention. If you don’t really care for word games, Perquackey doesn’t do anything that will make you change your mind. On the other hand if you love word games I think you will really like Perquackey.

Being a word game that features dice you basically get what you would expect from the components. You get dice, a dice cup and a timer. There is nothing special about any of the components. For their age the components are not that bad. With the letters only being printed on the dice though I worry that with extended play they will fade off. I also think the game could have done a better job distinguishing between “W” and “M”.

Perquackey is the very definition of a solid but unspectacular word game. While Perquackey might have been original when it was originally made, it is not that original today. Perquackey shares a lot in common with a lot of other word games. I did like the small tweaks to the scoring and the vulnerable rules but otherwise the game doesn’t really do anything unique. The game also relies on luck and requires players spend a lot of time sitting around waiting for the other players. Fans of word games will probably really like Perquackey but the game doesn’t really do anything that will engage someone that doesn’t already love word games.

If you would like to purchase Perquackey you can find it online: Perquackey (1956) on Amazon