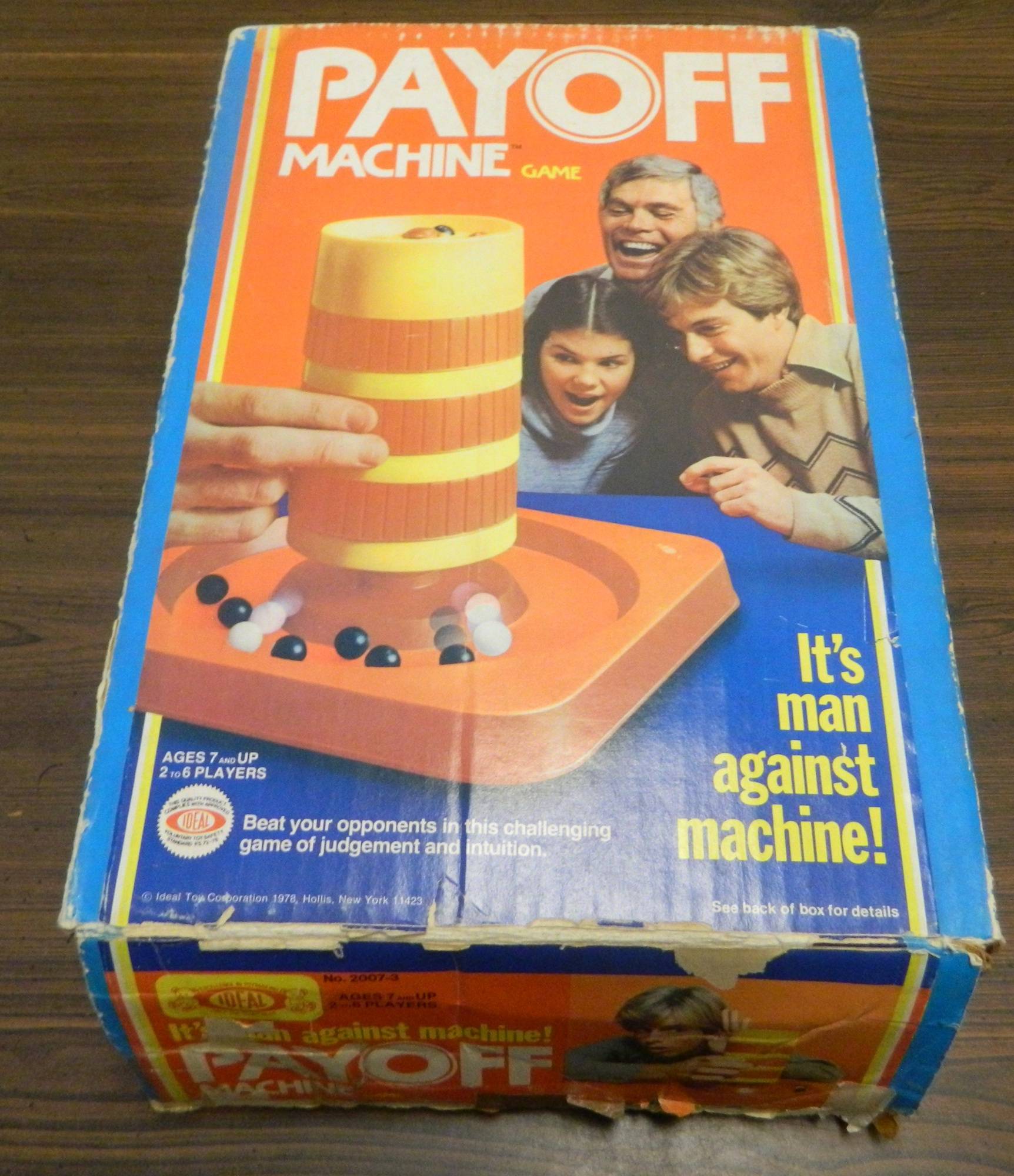 It’s man against machine in the 1978 Ideal game Payoff Machine. In the Payoff Machine players have to place marbles into the machine, turn the dials and hope more marbles come out of the machine than they originally put in. If this sounds like a slot machine your intuition would be correct. I didn’t have high expectations for Payoff Machine since it looked like it relied entirely on luck but I was curious as the game looked different than anything else I have ever played. Payoff Machine tries to create the board game equivalent of a slot machine but ends up creating a game worse than playing an actual slot machine.

How to Play Payoff Machine

For a move a player can choose to turn any of the three orange dials in either direction. The player continues to turn the dial until they feel a “click”. At this point you can interpret the rules in two different ways. I initially interpreted the rules to mean that you could only turn one of the dials for each move. After looking over the rules again though, I could see you interpreting the rules where you get to turn all three dials for each move. After a player makes all of their moves, they collect all of the marbles that have fallen out of the bottom of the machine. The next player then takes their turn.

When a player acquires 25 points they win the game.

When I first saw the Payoff Machine it reminded me a lot of a slot machine. It looked like you just put in marbles and hoped that after making your moves more marbles would fall out than you put in. At this point I can’t say that I had a lot of hope for the game as it looked like it was going to rely mostly on luck. When I thought about it some more though, I could see some potential strategy in Payoff Machine. There were two areas that I was interested in.

First the game has a little bit of a risk/reward mechanic. To begin each turn you will choose how much money you want to bet. You can play it safe by only putting in a couple marbles. You won’t lose much but you also decrease your odds of getting any marbles. On the other hand you can bet up to ten points of marbles. This will give you more opportunities to turn the dials which should increase your odds of getting marbles. Since you bet more you will also have to get out more marbles to break even though. While this is far from a deep mechanic I thought it could have lead to some interesting decisions.

The other area I was interested in was the idea of using your intuition to figure out which dials you should turn and in what direction. I initially thought this would work like a memory mechanic where players tried to remember how many marbles were in each level of the tower. Players then could use this knowledge to determine which dials would be best to turn in order to maximize their payout. In theory this makes since as it is not that hard to track where marbles have fallen as you can clearly hear when they fall.

The problem is that neither of these ideas really add much to the game’s strategy. While you will likely get more marbles when you spend more, it usually doesn’t matter since you will likely end up losing as much as you would have if you bet less. As far as intuition it can only take you so far in the game. You can kind of remember how many marbles there are on each level but that doesn’t really tell you anything about where they are located in each level. Unless you somehow have played the game enough to memorize the layout of each level, it doesn’t help much knowing how many marbles are on each level. You still have to guess which way you should turn each dial.

One of the biggest problems with Payoff Machine is that the components themselves don’t work that well. The rules mention that you turn one of the dials until you feel a “click”. This seems straightforward at first but it is not nearly so clear in execution. This might be partially due to wear and tear but feeling the clicks is not nearly as easy as you would expect. You will occasionally feel them but you have to be turning the dials really slowly. There are quite a few times that you won’t feel them at all. This is a big problem as the game relies on knowing how far you can turn the dials each move.

Since it was so hard to actually feel the clicks we decided to add in a house rule that a move consisted of turning one of the dials until you could hear one of the marbles fall. I actually think this improved the game in a couple ways. First players didn’t have to wonder whether they actually felt a click. When the marbles fall it is noticeable enough that everyone will know. The bigger reason why I would recommend using this house rule is that it should make the game easier which is something the game desperately needs. With the players being guaranteed to have at least one marble drop at least one level for each move this should improve payoffs and thus make it easier to accumulate marbles.

Unfortunately even with a house rule that should have improved the odds of getting marbles, it is still extremely hard to get a payout in the game. Basically your experience with the game is going to feel a lot like playing a slot machine. You put in money/marbles into the machine and hope that you get more out of the machine than you put in. Just like a slot machine though the odds are not in your favor. You could end up putting in three to five marbles and only receive one or two at the end of your turn. This keeps happening to the point where our game ended with everyone going bankrupt. Isn’t that a great ending for a board game? While I am not a fan of slot machines, I would still say that they are better than the Payoff Machine as you can actually win real money and at least you get flashing lights and sounds as the machine steals your money. You get none of that with the Payoff Machine.

I think the main reason why the payouts are so terrible in Payoff Machine is that marbles tend to get “stuck” in the higher levels of the machine. I mean that in a more figurative sense than literally. The problem is that it is just really hard to get the marbles to fall from the highest levels. A logjam starts to form at the top of the machine which prevents the lower levels from getting marbles. I think this is due to a couple things. First I think the mechanics of the machine are designed in a way where too few marbles fall out of the top levels with each turn. This means that you have to waste a lot of your moves just to get the marbles out of the top of the machine.

This leads to the other problem which relates to the gameplay itself. While players will have to use a lot of their moves to turn the top levels, from a gameplay perspective it makes no sense. If you have a lot of moves it makes some sense to use some of your moves to turn the top levels. If you don’t insert a lot of marbles though it makes no sense to waste them on the top level. By turning the top levels you let marbles fall to the lower levels but if you don’t have enough moves to get those marbles yourself you are basically wasting marbles helping the other players. Therefore players will tend to just turn the bottom two levels since that is the only way you going get any marbles back.

As far as the components are concerned they are decent but have some issues. I give them credit that they are made from pretty thick plastic so they should remain pretty durable. I will say the components are pretty bland though. I have alluded to this already but I wonder how much wear and tear impacted how well my copy of the game worked. I took the whole tower apart (is surprisingly easier than I expected) and I didn’t really notice anything that was obstructing the marbles from falling down the holes. There was just some normal wear and tear from the dials being spun. While I am guessing the wear and tear had a little impact, I think most of the problems come from how it was designed.

Before wrapping up I want to point out that the rules could have done a better job explaining what constitutes a move. How the instructions are written I initially interpreted them to mean that for each move you were only allowed to turn one of the dials. Based on how the rules are written this is how I think the game was designed to be played. Looking over the rules again though I could see them being interpreted to mean that for each move you get to turn all three dials. If this is the case the rules could have made that fact a lot clearer. I will say that this interpretation will lead to players getting more marbles. I don’t think it will will drastically improve the game though. Even under these rules I can’t see giving the game higher than two stars. I will say that even if the second interpretation was not the intended rule, I would suggest using it as it will make the game a little better.

Should You Buy Payoff Machine?

I didn’t have high expectations for the Payoff Machine. I hoped that the mechanic of paying more to get more turns and being able to use intuition to figure out where the marbles were would make the game serviceable at least. Unfortunately neither really do much to help the game. The decision of whether to spend more or less doesn’t play a big role in the game. Your intuition will also only go so far. What you are left with is basically an exercise in luck. The biggest problem is that the payouts are so low in the game that the Payoff Machine reminds me of a less interesting slot machine. The marbles seem to get “stuck” at the top of the tower which usually leads you to lose marbles on every turn until you finally go broke. Even if you use the more generous rule of being able to turn all three dials for each move, the game will still rely heavily on luck and is just not that interesting.

I honestly have a hard time recommending Payoff Machine to anyone. The game had a little potential but it does nothing with it. Unless you have fond memories of the game or you really like the idea of having a board game that simulates a slot machine, I don’t think Payoff Machine is going to be for you. Even if the game interests you I would highly recommend finding some house rules that will help fix the game.

If you want to purchase Payoff Machine you can find it online: Amazon

One thought on “Payoff Machine Board Game Review and Rules”