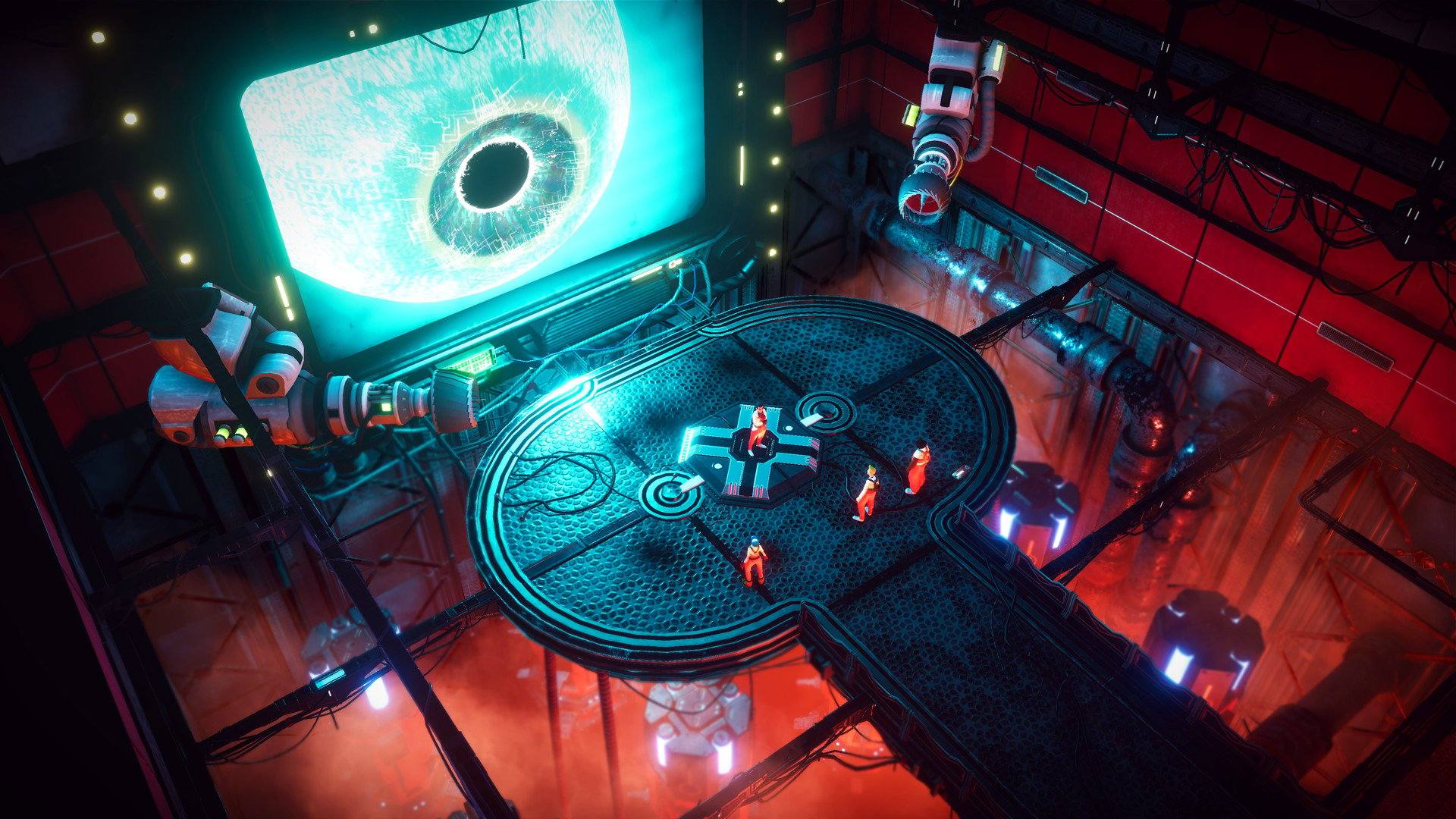 Unfortunately since I am not a big tabletop role player I have to say that I had never heard of the Paranoia franchise until recently. Originally released back in 1984 the pen and paper RPG franchise Paranoia has had a steady fanbase for quite a few years. In the game players play as clones in a dystopian future where humanity is run by a computer AI known as Friend Computer. Each player is given a different role and objectives that they have to complete for the AI. Over the years quite a few different editions of the tabletop game have been released. While there were a couple basic video games made for the series many years ago, Paranoia has never really had a faithful video game adaptation. This brings me to Paranoia: Happiness is Mandatory. While I had never heard of the tabletop RPG that it was based on , I thought the game looked interesting due to its theme. Paranoia: Happiness is Mandatory has an interesting theme and the emphasis on you always being watched is interesting even if the gameplay is a little lacking.

In Paranoia: Happiness is Mandatory you play as a clone that has been recently activated. You and the rest of humanity live at Alpha Complex which is controlled by the AI named Friend Computer. Everything appears to be perfect at Alpha Complex mostly because Friend Computer makes it that way. Anyone who defies that fact is branded a traitor and is quickly terminated. Due to this atmosphere there are spies everyone as everything you do is monitored by the AI as well as your fellow residents. Will you be a good little clone and stay on Friend Computer’s good side or will you rock the boat and face probable termination?

As I mentioned at the beginning of this review one of the main reasons that I was interested in Paranoia: Happiness is Mandatory was the theme. While the theme has maybe been a little overdone in recent years I have always found dystopian future themes to be really interesting. I had no prior experience with the Paranoia franchise, but I thought the idea of a society being run by a rogue computer AI was a really interesting idea. The idea of the constant paranoia of always being watched was intriguing since any decision you make that violates Friend Computer’s orders would be seen and reported. I had pretty high hopes for this aspect of Paranoia: Happiness is Mandatory.

I would say that the story and atmosphere in Paranoia: Happiness is Mandatory is pretty good for the most part. The visuals are solid but not spectacular. Otherwise the game does a pretty good job creating an interesting world to explore. The story has a sort of charm to it as well since it is not particularly serious which seems to be representative of the RPG that it is based on. It is obvious that Friend Computer is evil and yet all of the characters don’t seem to know or really care. The tasks you have to complete and the various characters you encounter are also quite quirky. This can lead to some funny moments especially if you like the game’s brand of humor. Some of the jokes fall a little flat though. The game also relies on you reading through pretty long dialogue exchanges as well. If you aren’t a big fan of games with a strong emphasis on story Paranoia: Happiness is Mandatory may not be for you. People who think the game’s concept sounds interesting though should have fun with this aspect of the game.

So enough about the game’s story/atmosphere. Lets move onto the gameplay. If I were to classify the gameplay I would say that it is pretty similar to your typical third person top-down RPG. In the game you will control your own character who is the leader of three other Troubleshooters. Most of the gameplay involves you moving the four characters around the station with the click of one of the mouse buttons. The gameplay otherwise basically splits into two different branches. First there is exploration. You move your characters around to gather information, pick up needed items, or talk with citizens. This mostly involves on clicking on the appropriate items and talking with the right citizens in order to get the information that you need.

The other branch of the gameplay is the combat. The combat is pretty basic for the most part. Just like with the exploration you click on the ground in order to move your troops behind cover and put them in position to shoot your enemies. Once a troop is in position it will start shooting at enemies that are within its range. If you would prefer that they target another enemy you can click on the enemy which will change their target. Each of your troops also have different abilities that they can make use of. You can use these abilities to give various stat boosts to your own troops or to deal special damage or apply effects to the enemies that you are shooting at. All of this combat is done in real-time, but the game also has a pause feature where you can pause the game at any time to figure out what you want to do next.

If the gameplay of Paranoia: Happiness is Mandatory sounds familiar it should as it is basically what you would normally expect from this genre. Outside of one thing that I will talk about shortly there is nothing particularly original about the gameplay. The exploration is really basic as there are no difficult puzzles that you have to solve. The combat for the most part feels really passive. In some ways it reminds me of games like World of Warcraft but with less ways for you to impact the combat. Your characters will automatically fire when an enemy is within their range. You can choose which enemy your units target as well as when to use special abilities. That is basically all there is to the combat though. I would say that most of your impact on the combat comes from positioning your troops. Where and when you decide to move between covers seems to have the biggest impact on whether you are going to be successful in combat. Basically you need to do a good job positioning your troops, and then just sit back and hope that your troops will end up winning the fight.

Ultimately I found the gameplay to be solid but nothing spectacular. The gameplay works for the most part and it is pretty straightforward. It can be fun at times but it can also be a little boring too. I just wish there was a little more to do in the game. The exploration mechanics seem a little too basic where it just boils down to clicking on the right areas and choosing the right dialog options. The combat feels like it relies more on positioning your troops than anything else. These elements are fine but I think they could have been expanded on a little more to make the gameplay a little more interesting. If you like these type of games you should have some fun with the gameplay, but I wouldn’t consider the gameplay to be a big selling point for the game.

The one somewhat unique element of the gameplay comes from the title itself, paranoia. The game makes it obvious early on that everyone is constantly being watched. From the many cameras and sensors to the other residents there will always be someone watching you. This creates a real sense of paranoia in the game as the citizens are all too willing to snitch on one another whenever they break one of the rules. There are a quite a few rules to follow as well. Each section of the station is color coded and you can’t access ares above your clearance level. You can’t ever question anything that Friend Computer does because everything is “perfect” and going according to the plan. Not showing enough enthusiasm for your tasks or asking about things that you either should already know about or things above your clearance level is also against the rules. Each time you break the rules your treason level will go up. Once your treason level gets too high Friend Computer will turn the rest of the citizens against you which will lead to your death and the next version of your clone taking over.

I found this to be a really interesting idea. You need to try to follow the rules the best that you can or the game will become harder. Early in the game you may end up breaking some of these rules by accident as you adjust to how the game is played. As you begin to understand the rules though you need to consider whether you want to break them. For example you will be given several opportunities to join secret societies which is definitely against the rules. You could choose to either join these groups and try to help them out, or you can rat them out to Friend Computer and exterminate them. I thought this idea was interesting as it made you think closely about each of your decisions. In each mission the game pretty much forces you to break a few rules though as there is no way to proceed without breaking the rules. This leads to the mission debriefing where you and the troops you commanded being given the opportunity to rat on one another. You can choose whether to keep their infractions secret or turn them it. At the same time they can divulge your infractions. Therefore it is important to pick people to join you that you think you can trust. Outside of the game forcing some of these decisions on you I thought the idea was really interesting. It may not fix all of the other issues with the gameplay, but I thought this paranoia mechanic was a interesting addition to the game.

I ultimately found Paranoia: Happiness is Mandatory to be a decent but somewhat flawed video game. Despite no prior experience with the franchise I thought the game’s overall atmosphere was pretty good. The whole idea of a dystopian future where all of humanity is run by an evil computer AI is intriguing. The world building is pretty good and the story can be pretty funny at times. It seems like the video game shares this element with the tabletop RPG that it is based on. Fans of the original RPG should appreciate this aspect of the game. I also found the paranoia aspect of the game to be pretty interesting as every action you take in the game is scrutinized and can lead to your treason level increasing. This adds some interesting prisoner dilemma situations where you have to decide whether to rat out your teammates before they rat you out. I liked this mechanic except that the game regularly forces you to break the rules just to progress through the game. The biggest problem with Paranoia: Happiness is Mandatory is that the gameplay is otherwise pretty basic. The combat mostly involves positioning your units behind cover and hoping that they will survive the fights. The combat just feels pretty passive which leads to gameplay that can be kind of boring at times.