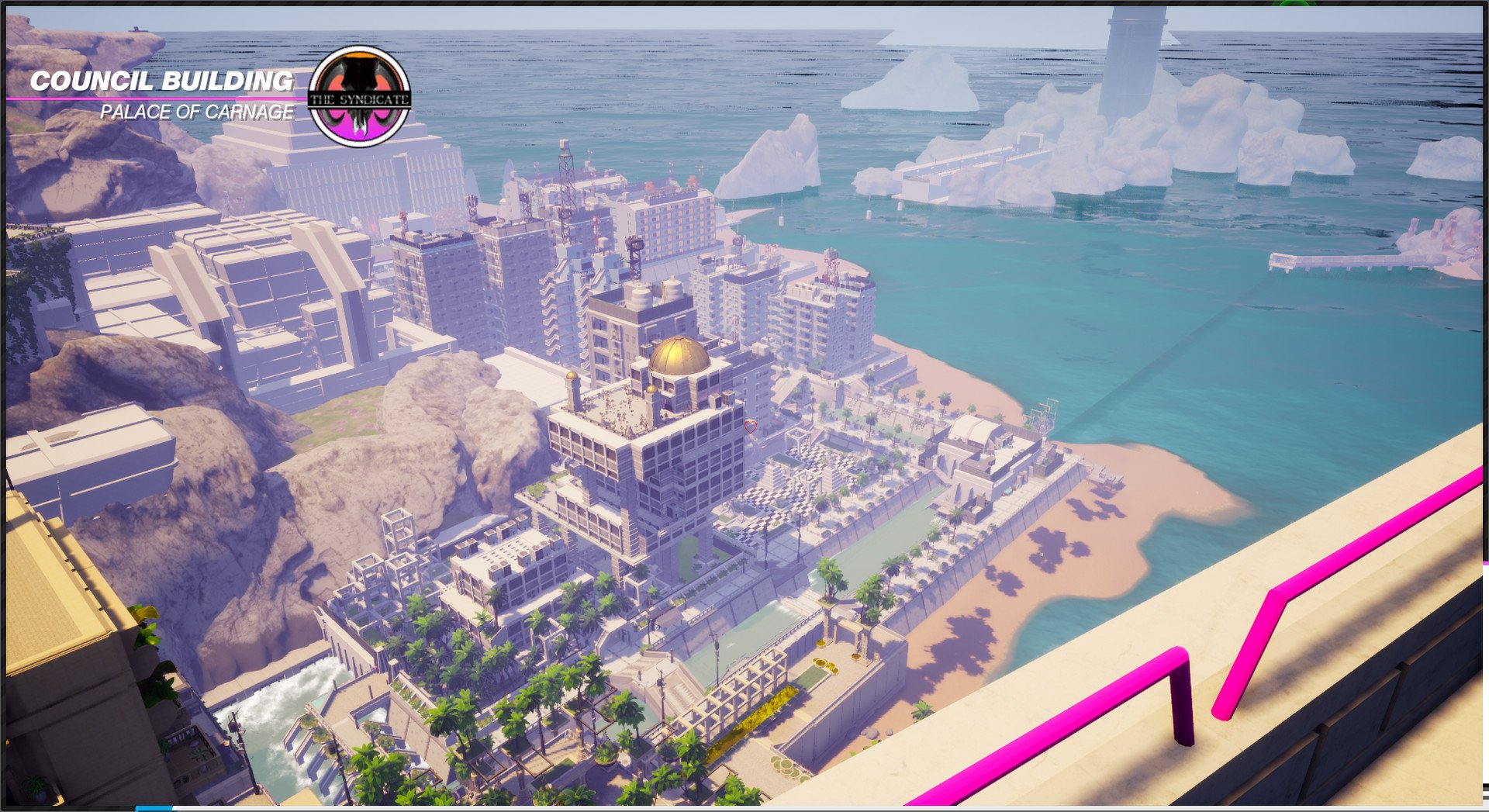 I have always been a fan of a good mystery. Whatever form it comes in, it is always satisfying being able to figure out the culprit before the entire mystery is resolved. Naturally solving a mystery fits well with video games as you don’t have to just be a passive observer. While I haven’t played a game in the series for quite a few years, I was a big fan of the Phoenix Wright Ace Attorney series. When I first saw Paradise Killer it reminded me of Phoenix Wright even if it was targeted towards an older audience. With some sci-fi elements and a whole island to explore to find the killer, I thought Paradise Killer would be an intriguing mystery to solve. Paradise Killer does a good job creating a unique world to explore and mystery to solve that fans of a good mystery video game should enjoy.

Paradise Killer follows a group called the Syndicate, a human civilization that worships dead alien gods. The Syndicate lives on an island called Paradise which was created in order to feed and eventually resurrect the dead alien gods. The flaw with this plan is that the island always attracts demons who end up corrupting a resident of Paradise ultimately destroying any hope of the island succeeding in its mission. This leads to the Syndicate destroying the previous island and starting over with a new island. When the game starts the Syndicate is about to launch the 25th Paradise. On the night before it is supposed to happen though the entire Council (those responsible for creating the new island) are killed. You play as Lady Love Dies who is summoned from exile (due to events that happened on a previous Paradise) to figure out who committed the crime. Can you find the evidence to prove who is responsible for this horrible crime?

At its core Paradise Killer is an investigation game. The objective is to find out who committed the crime. Talking/interrogating the inhabitants of Paradise is the main way of getting information in the game. The dialog system is pretty simple. When talking with someone you can choose what topics to discuss from a list. During conversations you are also given choices between two different responses depending on how you want to approach the discussion. You also have the option to hang out with each inhabitant which improves your relationship. This occasionally unlocks additional information which will help you in your investigation.

While you will get a lot of information just by talking to the inhabitants of the island you will also find evidence scattered around the island. Unlike most investigation games where you are automatically teleported between key locations Paradise Killer actually features an open world to explore. The entire island of Paradise is explorable with a few exceptions. The open world does a surprisingly good job of making it feel like you are running a real investigation. Instead of just teleporting between the crime scene and witness locations, you actually have the ability to move around the island looking for hidden clues and evidence. I was genuinely impressed by the size of the island as there are a lot of things to explore. The game even includes a fast travel system that you can unlock between locations if you are willing to use some of your currency. I liked a lot of things about this aspect of the game as it makes things feel more authentic and it does a good job building out the game’s universe.

Unfortunately the open world also leads to Paradise Killer’s biggest issue. I think the game could have done a better job optimizing the open world. I say this for a couple reasons. While I liked that the world was quite a bit bigger than I expected, it feels like a lot of the world is kind of empty. What I mean by this is it feels like a lot of the locations aren’t really important to the overall mystery. This could just be because I didn’t find the piece of evidence or testimony that would unlock parts of the mystery in these locations, but too many locations feel like they were just added for hidden collectibles and lore. This could change later in the game as I haven’t completed the game yet, but it kind of feels like a waste traveling through locations that don’t really add much to the gameplay experience.

The bigger problem with the open world is the fact that it is a lot harder to navigate than it needed to be. The game does have fast travel locations which helps, but each time you travel it costs currency so you can’t fast travel at will. The reason why the world is so hard to navigate is that the game’s map is not particularly helpful. The game only gives you a basic map with main location highlighted throughout the island. Outside of the general direction there is no indication of how you move from one location to another. By pulling up the map you can get a general idea of where you are, but the map doesn’t show you how to get to the location you want to go to. The map doesn’t even indicate which direction you are facing. To even determine if you are going the right way you need to pull up the map when you reach a new location, and compare that location to your previous location which will give you a general idea of the direction that you are moving in. I genuinely got lost a couple of times and some of the locations were far too hard for me to find.

The ultimate goal of the game is to build a case against one of the inhabitants that proves that they were responsible for the crime. This introduces one of the other unique elements of Paradise Killer. Apparently there is no singular correct solution to the mystery as all of the inhabitants can actually be the killer. All of the inhabitants have a motive and there is evidence to support anyone being the killer. Basically the game wants you to explore the island, find evidence, and build up a good enough case to convict the person that you accuse. I haven’t played the game enough to see how this works in action, but I can see glimpses of it in action as you quickly find out that everyone has a reason to have committed the crime and there is evidence that leads to all of them. I am kind of curious if this will lead to some of the conclusions being kind of unsatisfactory though knowing that you can actually prove a case that anyone is guilty instead of only having one solution that is finely tuned.

As for the overall theme/atmosphere I have some mixed feelings. I give the game credit as it creates a really interesting universe. I don’t know if I have ever played a game with a theme quite like Paradise Killer. I think the developers deserve credit for trying something new. The game’s world is quite interesting even though you can make an good argument that none of the characters in the game are particularly “good people”. You can tell that a lot of work was put into developing Paradise Killer’s world. At times the story is a little hard to follow though as it has some periods where it dumps a lot of lore on you and you don’t always know what it is talking about. You eventually start to understand what is going on in the world, but there were some times where I was a little confused on what was going on.

For the most part I enjoyed playing Paradise Killer. The game shares a lot in common with most mystery/investigation games, but it feels unique as well. The game really makes you feel like an investigator. You are given a few leads to start, but you are then responsible for following any leads that you find while investigating. The mystery begins with an obvious suspect, but you will soon realize that they might not have committed the crime. The game doesn’t really include any revolutionary new mechanics, but investigating is still quite fun. Anyone who enjoys mystery/investigation games should enjoy their time with Paradise Killer.

In my video game reviews I generally like to give an estimation of how long it takes to beat the game. Due to how Paradise Killer is structured though it is really hard to give a definitive length to the game. It also doesn’t help that I haven’t completed the game yet. The length is really going to depend on how deep of an investigation that you run. If you thoroughly search the island and run down every lead it will obviously take quite a bit longer than if you find the first good suspect and try to present your case. There appears to be a lot to investigate as the island is pretty big forcing you to explore if you want a clear picture of what happened. It took me a lot longer than I expected just to interview all of the suspects and explore each location initially. On top of this I actually think the game has more replay value than most investigation games due to the fact that anyone can be the culprit so you can explore different solutions to the case adding quite a bit of time to the game.

Paradise Killer is not going to be for everyone, but I thought it was an enjoyable experience. In many ways the game is similar to your typical mystery/investigation game as you are tasked with investigating a murder and figuring out who was responsible. This involves spending quite a bit of time talking with the inhabitants of the island to get additional information to drive your investigation. You also need to explore the island to find pieces of evidence that can help build your case. I was genuinely surprised by the open world aspect of the game as it was larger than I expected and made it really feel like you were leading an investigation. It is sometimes a little hard to navigate the island though to find your way to a specific location. The thing that might be the most interesting is that anyone can be accused of the crime and there is evidence to support any case. Paradise Killer creates an interesting world to explore filled with unique characters that have their own motivations to commit the crime.

If you have never really been into mystery/investigation games or you aren’t that interested in the game’s world, I don’t think Paradise Killer will be for you. After reading this review though if you think Paradise Killer sounds interesting I think you should check it out as you will likely enjoy it.