Ever since there have been decks of playing cards, there have been card games. Most card games utilize a standard deck of playing cards since almost everyone owns a deck of playing cards. Over the years there have been attempts at creating a new standard deck of cards that can be used to play many different games. One of the most popular is Rook. Today I am looking at a more modern deck of playing cards, Pairs. Pairs is a deck of cards which contains 1-1, 2-2s, etc up to 10-10s. Like Rook, the Pairs deck of cards can be used for many different games. The game of Pairs has started to develop a following as it has made appearances in the Kingkiller Chronicles and Girl Genius series. While I am generally not a fan of pub style games I was curious because Pairs looked so simple and was well regarded. While I give the game credit for the variety of games that can be played with the deck, Pairs is not that compelling of game as it relies almost entirely on luck.

How to Play Pairs

On a player’s turn they take one of two different actions:

If a player chooses to draw a card they hope to draw a number that they don’t already have in front of themselves. If they draw a new number they place it face up on the table. Play then passes to the next player. 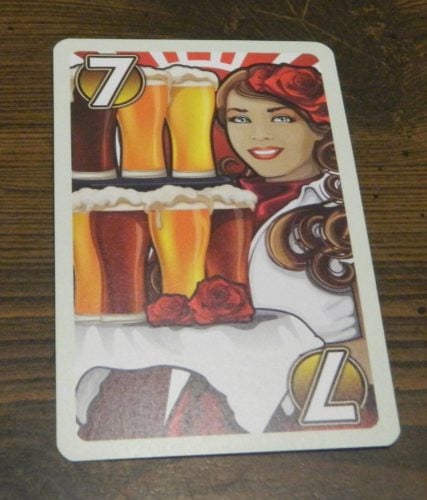 This player has drawn a seven card. If they don’t already have a seven card, play passes to the next player.

This player has drawn a second nine card. They will score nine points.

Otherwise the players can choose to fold. When a player chooses to fold they will take the lowest card that is face up on the table (even if the card is in front of another player). The player will score points equal to the number they took. 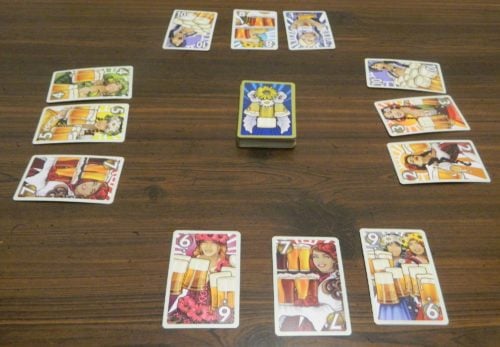 The current player has three cards in front of them. If they choose to fold they will take the one card from the top player and will score one point.

When a player either draws a pair or chooses to fold, the round ends. All of the cards in front of the players are discarded except for the cards that are kept to indicate points. Each player is then dealt a new card and the next round begins.

The player who reaches the target score loses the game while the rest of the players win.

My Thoughts on Pairs

I will begin by saying that this review is going to be different than your typical card game review. This is because Pairs acts more like a standard deck of playing cards than your typical card game. While Pairs has an official game, the true value of Pairs comes from the fact that the deck of cards can be used to play many different card games. Here is a link to just some of the games that you can play with a Pairs deck.

While this review is mostly going to be focused on the main game and its main variant rule, I have to give Pairs credit for the quantity of different games that you can play with the cards. With so many different games there is a lot of variety in what you can do with the game. If you don’t like one of the games, there are many other games that you can play. I could even see people creating their own games using the deck just like with standard playing cards.

With how successful Pairs has been there have actually been quite a few different decks created for the game. Each deck is mostly the same except for the artwork and some of the games have their own variant games. Some of the different themed decks include: Antique, Barmaids, Commonwealth, Deluxe Edition, Faen, Fruit, Goblin, Goddesses of Cuisine, Infinite Space, Las Vegas, Lord of the Fries, Lucky Mansion, Modegan, Muses, Pirate, The Princess and Mr. Whiffle, Professor Elemental, Shallow Ones, Tak, Trolls, and Wild West. You might be wondering why I ended up choosing the Barmaids deck shown in this review. Well it just so happens that is the deck I found at the thrift store for less than a $1.

While I really haven’t played any of the variant games outside the main game and the continuous variant, if the other games are anything like the main game they are really simple. The basic game is basically a pure press your luck style game. On a player’s turn they need to decide whether they are going to press their luck and draw another card or if they are going to fold and take points for the lowest valued card on the table. If a player ends up drawing a duplicate card they will take points equal to the duplicate card.

As players are basically given one simple decision to make every turn, the main game is something that you could probably teach to new players within a minute or two. The game is simple enough that children old enough to count to ten and have a basic concept of probability should have no troubles playing the game. Pairs is regularly called a pub game and that name fits the game perfectly. You can easily finish a game in five to ten minutes and the game doesn’t require a lot of thought so you could easily play it in a bar or restaurant. I think the game could work quite well as a drinking game and could even be used in gambling settings.

While I could see the potential for Pairs, the base game is disappointing in my opinion. As there is only one decision in the game, there is very little strategy. Basically you need to decide whether you are going to take a risk or if you are going to play it safe and take less points than you otherwise might have had to take. While you could apply some probabilities and card counting to help you decide what you should do, your fate is ultimately going to come down to luck. As there is no way to change what card you will draw (other than cheating), you just have to hope that you make the right decision on whether to draw another card or fold.

One area where the main game had some potential for strategy was players strategically deciding to fold early. This is one of the reasons I was interested in trying out the continuous variant. The problem is that players never get the chance to strategically fold because the game ends too quickly. In the four player game you could easily be eliminated from the game by losing just two rounds. When you can only fold/score two to three times before you lose, there really are no opportunities to play the odds when choosing whether to fold. While I don’t think it would have significantly improved the game, Pairs is an example of a game that went too far in trying to shorten the game. If the game was a little longer I think there would have been a little more strategy which would have helped the game. If I would ever play the main game again I would highly suggest increasing the number of points you can score before you lose the game.

In addition to it being so easy to lose the game, it is also far too easy to get a pair in the game. In the entire game that I played, no player was ever able to draw a fourth card without getting a pair. Players regularly would get a pair on the third card they drew. There were even situations where players got a pair with only two cards. With it being so easy to get a pair there is not enough time to make any meaningful decisions. With you only being able to draw two or three cards, turn order and luck plays a huge role in how well you will do in the game.

This is one of the reasons that I thought the continuous variant rule was going to improve the game. With the continuous rules players don’t discard cards when another player scores. I thought this would add more decisions to the game because players might choose to fold more often just so they can get rid of the cards in front of them. The problem is that while this adds more reasons to fold, it actually makes folding too tempting of an option in some situations. Basically when anyone draws a low card and you have more than two cards, you will be tempted to take the low card just so you can get rid of the cards in front of you. This basically creates a race to take any low card that gets revealed. In some ways the continuous rules improve the game but in other ways it actually makes the game worse.

While I think the main game could use some work, the same cannot be said for the components. While the different sets all look different, I have to give the artists a lot of credit. The artwork for some of the sets in particular is fantastic. With the cards only featuring numbers, the game could have went cheap and used very simple artwork. The game didn’t though. If you can find a set that has a theme that you really like, I think you will really like the quality of the cards.

As I said earlier, this review is mostly based on the main game and the continuous variant. These two games just didn’t really appeal to me. They are too basic which leads to little decision making. I am kind of curious about some of the other games that you can play with a Pairs deck though. If most of the games play like the normal game I don’t think my opinion is going to change much with regards to pairs. If there are some truly good variant games to play with the deck of cards though I would consider raising my rating for Pairs.

Should You Buy Pairs?

I have to say that I was kind of disappointed by Pairs. The game had a lot of potential. Creating a set of cards that you could use for a lot of different games had the potential to have a lot of potential replay value. I give the game credit for including quite a few different games that you can play with the deck. There is potential in these variant games but it they are similar to the main game they just are not that satisfying. The problem with Pairs is that it is simply a pure press your luck game. Do you want to press your luck and possibly score a lot of points, or  do you fold and score less points? That is basically all there is to the game. The game is quick and easy to play but there is no real decision making in the game so the game relies mostly on luck. I will give the game credit for the great artwork though. While I didn’t particularly enjoy the main game, I am interested in checking out some of the variant games that have been designed to utilize the deck.

If you would like to purchase Pairs you can find it online: Amazon, eBay