A little over a year ago Geeky Hobbies looked at the 1981 Hasbro game Baboon Ball. In Baboon Ball up to four players each took control of a baboon and used it to shoot the ball into one of the other players’ goals. I thought Baboon Ball was a solid game that was more fun than you would think but was also a game that got repetitive rather quickly. I bring this up because today’s game Paddle Battle reminds me a lot of Baboon Ball. Just looking at the box for Paddle Battle, I thought the game looked pretty fun. I was a little skeptical though as Toy Biz is not a well known board game brand. Paddle Battle had the potential to be a fun children’s action game but the component quality leads to the game being an unsatisfying experience.

How to Play Paddle Battle

My copy of the game did not include instructions and I am not sure if the game ever came with instructions outside of what is written on the outer box. As the game is pretty self explanatory, these are the rules we used to play the game.

The player with the ball will insert it into the game. The two players then use their Paddle Battle figures to hit the ball back and forth. Each player is trying to prevent the ball from falling into their goal cup. 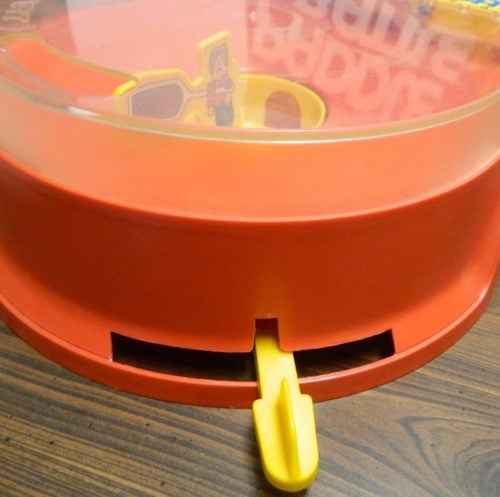 When the ball falls into one of the cups, the other player will score one point. The player who scored will move their scoring peg forward one space on top of the board. 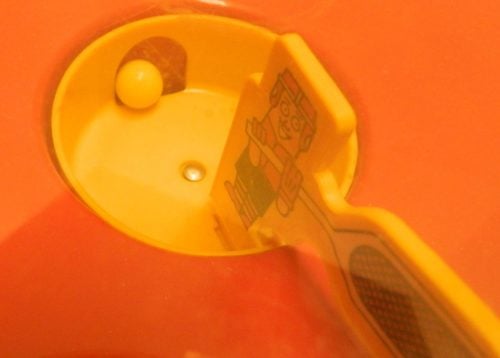 The ball has fallen into this player’s goal cup so the other player has scored a point.

The player who controls the cup that the ball fell into will rotate their figure until the ball comes out of the automatic return. This player will then put the ball back into the game and the players continue playing.

The first player to score 10 points wins the game.

The top player has scored ten points so they have won the game.

My Thoughts on Paddle Battle

Basically the premise of Paddle Battle is that each player has a little paddle that they need to use in order to keep the ball out of their own goal while trying to shoot it into their opponent’s goal. Unlike Baboon Ball where you are defending your goal in a left to right direction, Paddle Battle is designed where you have to defend around the entire goal. Each player’s paddle spins around the goal so you have to defend the entire goal. I actually found this to be a really interesting idea as I thought it would be challenging trying to defend all of the sides of a goal. I also thought it would give players more options when shooting as you have more control over your paddle.

In theory Paddle Battle could have been a good game. While playing the game I had some glimpses of what the game could have been. Hitting the ball back and forth while trying to score on your opponent can be fun. If you like these type of games you could probably get some enjoyment out of the game. The problem is that the fun doesn’t last. It is rare to get any rhythm going as the ball will usually fall into one of the goals within 10-30 seconds. This is a shame because the game is best when there is some actual back and forth. With the balls falling into the goals so quickly it just isn’t all that fun.

The biggest problem with the components is that it is surprisingly hard to actually get the ball into play after a goal has been scored. The Paddle Battle gameboard had to be enclosed or the balls would have flown everywhere while playing the game. The problem is this leads to most of the problems with the game. For some reason it is really hard to restart the game after each goal. We tried every way imaginable to put the ball back into the gameboard. No matter what we tried at least half of the time the ball rolled right into one of the player’s goal cups. It didn’t seem fair to give a player a point for doing nothing so we had to keep trying over and over until we were finally able to insert it without it falling straight into one of the goal cups. Maybe there is some strategy that we couldn’t come up with but you basically have to keep trying until you are finally able to insert the ball without it falling straight into a player’s goal cup. After a while this gets really frustrating. Unless you find a good strategy of how to insert the balls, you will waste more time trying to get each round started as you do actually playing the round.

With how hard it is to properly insert the ball I want to know why the game thought it was a good idea to put the slots where you insert the balls near each goal cup. Basically the only way to keep it from falling into your own cup is to slide it hard enough that it rolls to the other side of the board or you turn your own paddle quick enough to hit it. I don’t know why the game didn’t just put the entrances in the middle of the gameboard. You could then just insert the ball and still have enough time to hit it before it fell into one of the goal cups. This could have been easily implemented so I have no idea why it wasn’t added to the game.

Even if Paddle Battle didn’t have its other issues, it still would have been one of those games that got repetitive pretty quickly. As the game basically only has one mechanic you will likely get bored of it pretty quickly. I could only really see playing it for 10-15 minutes before I would want to put it away for another day. Basically Paddle Battle is one of those games that you bring out every so often for a game or two before putting it away again.

I began this review talking about Baboon Ball and I want to quickly address it again. While in theory Paddle Battle could have been a better game, in execution it is worse than Baboon Ball. Baboon Ball has its own problems but it still works better than Paddle Battle. Baboon Ball’s components work better allowing you to focus more on actually playing the game. There is also the fact that Baboon Ball supports four players while Paddle Battle only supports two. As these are the type of games that generally play better with more players, I think Paddle Battle suffers by only supporting two players.

Should You Buy Paddle Battle?

Paddle Battle is one of those games that seem better in theory than in actual execution. I actually thought the concept was pretty good as the game is designed where you have to defend around the entire goal cup. This is an interesting idea as it forces players to cover more of their goal while also giving them more shooting opportunities. The problem is that in execution it just doesn’t work as well as you would like. Too often the ball is only hit one or two times before it falls into one of the goal cups. Paddle Battle is fun when you have extended rounds but too often you are stuck in rounds that end almost as quickly as they begin. This is compounded by the fact that it is so hard to actually start another round without the ball falling directly into one of the goal cups. At the end of the day you are left with a game that can occasionally be fun but is only something you can play for 10-15 minutes before putting it away for another day.

If you would like to purchase Paddle Battle you can find it online: eBay