Hi-Q, a variant of the popular Solitaire style of board games, was a pretty popular puzzle board game in the 1960s and 1970s. Starting in the late 1970s and 1980s quite a few spin off games were made in the Hi-Q line of games. Outside of also being small puzzle games, a lot of these games had very little in common with Hi-Q. I really don’t know why they were considered Hi-Q games other than trying to cash in on the popularity of Hi-Q. Today we are looking at one of these Hi-Q games, Over-n-Out. While there is nothing seriously wrong with Over-n-Out, the game does absolutely nothing new to differentiate itself from every other memory game.

Separate the playing pieces by color. Each player randomly puts all of the pieces of one color number side down into the holes on one side of the board. The gameboard is then flipped so each player uses the pieces placed by the other player. The first player is chosen in any way that the players prefer.

On a player’s turn they will pick up one of the pieces and look at the number on it. If it has the number one on it the player puts it in the storage tray number side up. They will then draw another piece hoping to draw the two piece. Players keep drawing pieces as long as they draw the lowest remaining number. In future turns a player will start with the number they left off on during their last turn. 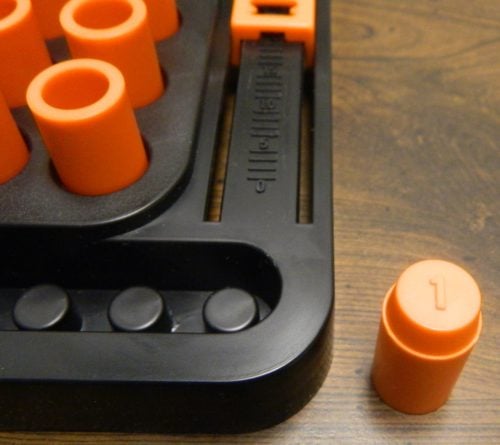 This player drew the one piece so they will get to draw another piece.

When a player draws a piece that is not the lowest remaining number, they put the piece back (number side down). Their turn also ends. 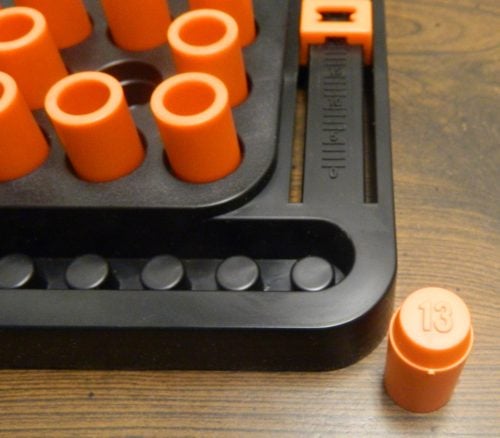 This player has not drawn the lowest remaining number so they put the piece back and their turn ends.

A round ends when one of the players have drawn all fifteen of their pieces in order. The player who has drawn all fifteen pieces will score points equal to fifteen minus the highest number the other player was able to place. 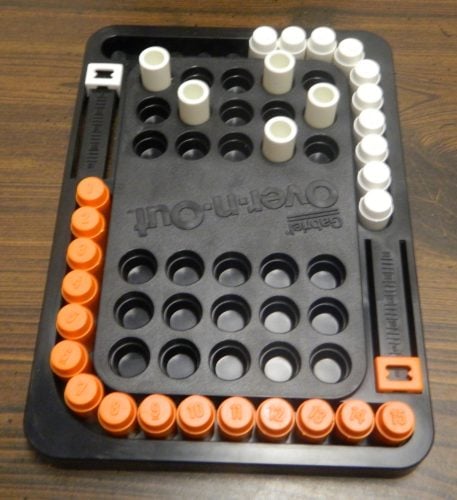 The game ends when one player scores 25 points. The player who scored 25 points wins the game. 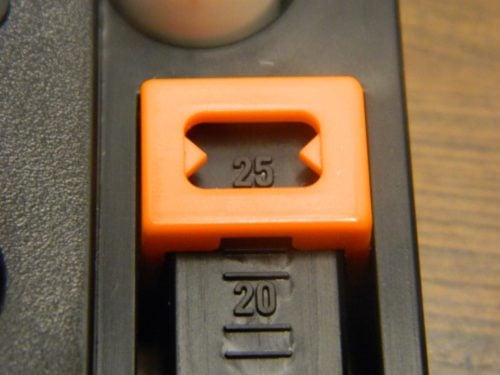 The orange player has scored 25 points and has won the game.

Just like with most memory games, Over-n-Out relies almost entirely on luck and memory. Outside of using a strategy to remember where each number is located, there is no strategy to the game. You need to get lucky and either draw the pieces in order or remember the location of most of the pieces that you have drawn. While a really lucky player will likely win, memory will usually be the determining factor. If you can remember the locations of most of the pieces that you draw you will have a good chance of winning the game. Even if a player gets out to a small lead, a player with a good memory can catch up quickly.

Other than not liking memory games in general, the biggest issue I had with Over-n-Out is that it has a built-in runaway leader problem. With every correct piece that is removed from the board, it becomes easier and easier to find the next piece you need. If a player gets out to an early lead it makes it even easier for that player to win the round. With less pieces on the board the player has to remember fewer pieces and there is a better chance that a player just guesses correctly. While a player with a better memory can catch up if they are only a couple pieces behind, if a player falls behind by four or five pieces the lead becomes almost insurmountable.

This brings up another issue that I had with the game. The area where luck plays the biggest role in Over-n-Out is with drawing low numbers early in the game. If you have a phenomenal memory you can somewhat overcome this but luck does play a significant role in the game. Drawing low numbers early in a round is beneficial since you will be able to get rid of them quicker which reduces the number of locations that you have to remember. If you can remember all of the locations this doesn’t matter but how many people can remember up to fifteen locations at a time.

The scoring system for Over-n-Out makes sense but I am not a huge fan of it. I have no problem rewarding a player if they significantly beat the other player in a round. In the game I played though every round ended with one player finishing one turn before the other player. In every round the losing player just messed up the order of one of the pieces and would have been able to finish if they were given one more turn. The problem with the scoring is that in this situation one player could score four points while another player could score seven points. Since the winning player only won by one turn, it seems a little unfair that one player would score more points than the other. I personally think the game should just count the number of rounds that both players win.

Over-n-Out’s component quality is decent but not great. The plastic is pretty thick and sturdy. The gameboard is really dull though. The score tracks on the gameboard are also pretty pointless since they don’t stay in place and could change just by bumping the board. You would probably be better off writing down the score on a piece of paper or using something else for scoring.

Since I am not a bit fan of the memory game genre it is kind of hard to judge Over-n-Out. Outside of the runaway leader and the scoring issues, Over-n-Out doesn’t really have any issues that aren’t present in other memory games. Over-n-Out basically plays like every other memory game. There is some reliance on luck but a good memory is usually key to winning the game. I found Over-n-Out to be pretty boring but I also don’t really like any memory games that have no mechanics other than memory.

If you want to purchase Over-n-Out you can find it online: Amazon