What Is Out of the Park Baseball 17?

Out of the Park Baseball 17 is the latest entry in the long-running text based baseball simulator series that lets you become the GM and/or manager of your favorite team and turn it into a dynasty. You can start the job during the upcoming 2016 MLB season or step in at any time during a team’s history to change their fortunes (or even create your own expansion franchise). You can also create your own fictional league (with different rules) or compete in an online league against other players.

For those of you who have never heard of the Out of the Park Baseball series, think of it as a much more advanced version of a franchise mode in a regular baseball game. You don’t get to play the actual games (they are simulated but you can instruct your players what to do when they are at the plate or on the mound) but you do get the excitement of scouting, drafting, signing, trading, promoting/demoting your prospects, and watching your favorite draftees turn into All-Stars. If you find yourself playing MLB: The Show but caring more about managing your roster and creating a dynasty than actually playing the games, Out of the Park Baseball 17 is for you. The game is extremely in-depth, even including minor things like the Rule 5 Draft and international free agency that can help you build your ball club. Pretty much everything that a real-life GM or manager would have to do is represented in this game. 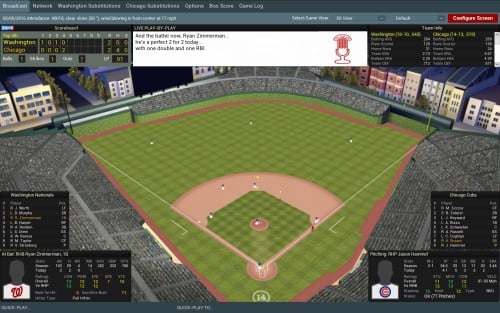 © Out of the Park Developments

Out of the Park Baseball 17 Review

As with all video game series that are released yearly, the most important things are what has been added and improved in the latest version (since most interested people already have a previous entry in the series and it may or may not be worth upgrading to the newest game). Since almost everybody interested in a niche game like this probably already owns an older year of the game, additions and improvements are an even more important factor in the game’s rating. New features in Out of the Park Baseball 17 include:

While I have played Out of the Park Baseball 14 and 15, I never got the chance to play last year’s edition which (since it was the first to add some MLB licensing), was probably a big leap forward in the series. While I’m not sure how much different Out of the Park Baseball 17 is compared to the previous year (outside of the list of new features provided by the developers), I do know that it is a pretty big improvement from 14 and 15. While those games were very playable and fun, Out of the Park Baseball 17 is a lot more polished and the addition of actual MLB and MLBPA licensing really helps the game. However, the decision of whether to purchase this game will ultimately come down to how much you think this year’s additions are worth to you.

If you are a newbie when it comes to Out of the Park Baseball, the first thing you need to know is that this game is nothing like MLB: The Show or other baseball games. You do not get the chance to actually play the games, you simply instruct your players on what to do in game (swing away, take a pitch, etc.) and try to build the best roster you can. If you are the type of player who plays MLB: The Show’s franchise mode but mostly just focuses on roster construction and wind up simulating most of the actual games, this is the game for you. While MLB: The Show has a pretty deep franchise mode as well, Out of the Park Baseball 17 is specifically built as a baseball management simulation and does an even better job at it.

While I do occasionally like to play a few actual games in sports video games, I do tend to prefer building dynasties in franchise mode. I love to micro-manage my team, getting every last ounce of value out of every trade I make. If you are like me, Out of the Park Baseball 17 is for you. While there are other baseball simulator games out there (Baseball Mogul, Strat-o-Matic Baseball, etc.), the Out of the Park Baseball franchise is the most in-depth one I’ve ever played. Even if you don’t manage the games themselves, a single year will take you hours to sim just because of all the features the game has to offer.

If you haven’t played a baseball simulator game before, you might think that a $39.99 price tag for a game where you don’t actually get to “play” baseball is ridiculous. However, Out of the Park Baseball 17 (and the entire series in general) is one of the biggest “one more turn” games on the market. It is basically the sport simulation fan’s version of Civilization in that regard, a game that fans of the genre will find themselves unable to stop playing and will wind up staying up to the wee hours of the morning to finish up a season. While Out of the Park Baseball 17 is extremely niche, people who love baseball and care more about managing their roster, scouting players, making smart trades for the future, etc. than actually playing the games will get so many hours of enjoyment out of this game that the $39.99 price will wind up becoming a bargain. Many of them will get hundreds, possibly even 1,000+ hours out of this game.

If you already own a previous game in the Out of the Park Baseball series, the decision on upgrading basically comes down to two things. First, if your most recent game in the series is pre-Out of the Park Baseball 16 (the first to have actual MLB.com licensing which allowed them to use team logos and other branding), I would recommend upgrading just for that alone. However, if you purchased last year’s edition of the game the upgrades won’t be quite as valuable to you (though having actual player faces in the game is pretty nice as are some of the other features). I would say Out of the Park Baseball 16 owners should take a look at the list of new features, determine how much they are worth to them, and if the amount exceeds the $39.99 price tag, they should purchase it.

Out of the Park Baseball 17 isn’t for everybody, you need to not only be a baseball fan but you also need to love building rosters and managing your team instead of playing the games. I will make three different recommendations, each for a different subset of the game’s audience. For baseball fans who would just rather play the games, pass on Out of the Park Baseball 17 because it is definitely not for you. For those who have never tried the series but are at least interested in playing a baseball management simulator, I highly recommend trying this game since it is the best on the market. Finally, for fans of the series who already have one or more games, the decision on whether or not to upgrade basically comes down to how much you think the improvements are worth. Owners of an older version like 14 or 15 will obviously get a bit more bang for their buck because of the extra year(s) of improvements that they will receive.

[…] "I highly recommend trying this game since it is the best on the market." Out of the Park Baseball 17 Video Game Review ? Geeky Hobbies "Quite possibly the greatest baseball simulator of all time." […]