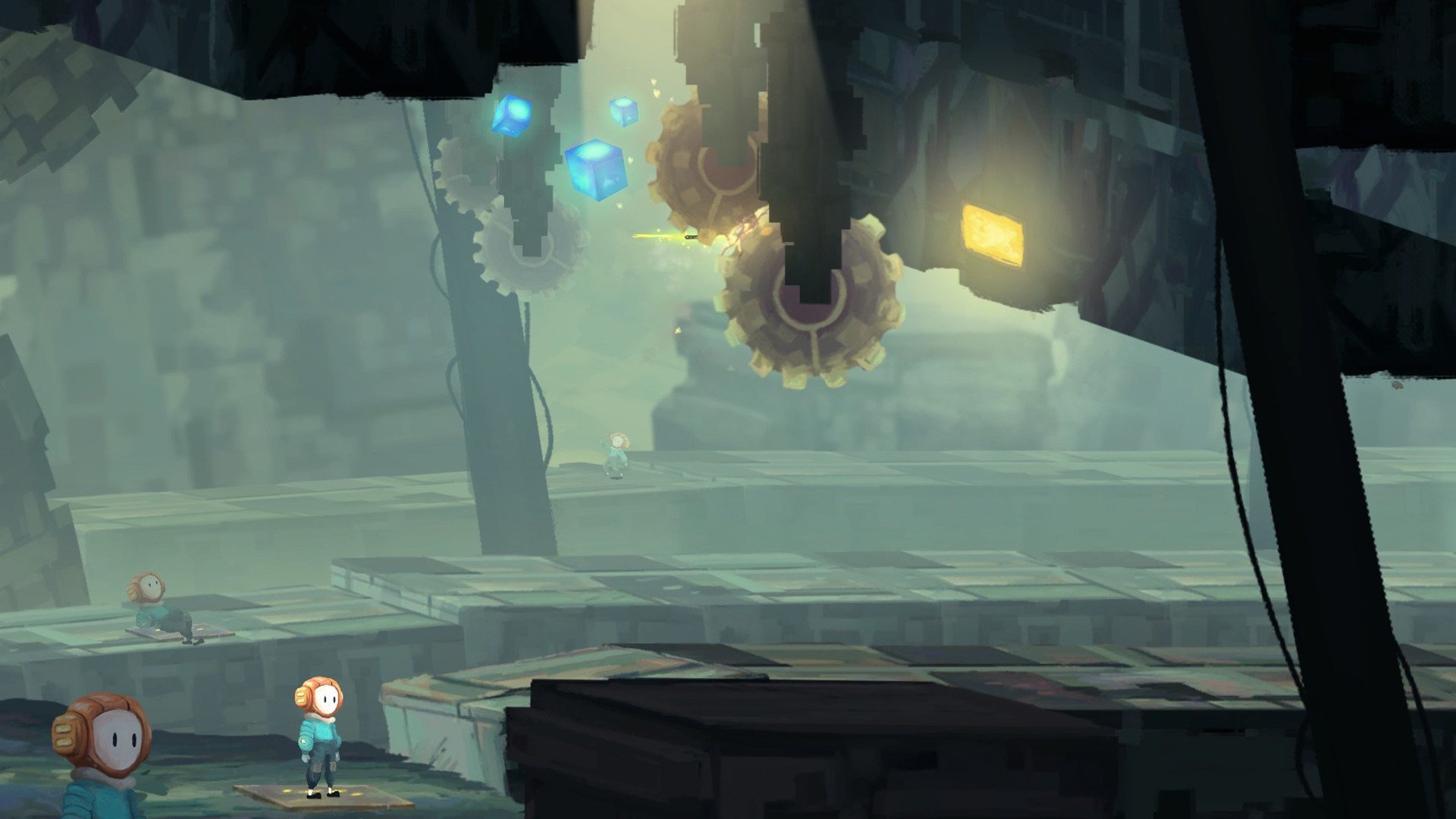 Out of Line shares a lot in common with your typical puzzle platformer. The ultimate goal of the game is to keep moving forward which entails jumping across gaps, and solving puzzles in order to open up paths to progress. Unlike a decent amount of puzzle platformers, the game has no combat. The game has a much greater emphasis on solving puzzles, and when you do encounter enemies you mostly just run away from them.

The one somewhat unique thing about the gameplay is the addition of a glowing spear which becomes a central gameplay mechanic. Your character only has a single jump which arguably is shorter than a lot of platformers. Early in the game you acquire a spear that you can throw which will stick into walls and other parts of the environment. You can use this to create a temporary platform/step helping you get to platforms that you otherwise wouldn’t be able to reach. This is also used in many of the game’s puzzles. Outside of helping with the platforming, the spear can be used to hit targets, clog up gears, and solve other types of puzzles. As you advance in the game the spear gives you additional abilities which are used in new puzzles and to help you get across larger gaps.

I have played many different puzzle platformers over the years. Because of this it is hard to find new games from the genre that are totally new and original. Out of Line does share a lot of elements with other puzzle platformers, but it has some of its own twists to the formula as well. The puzzles have a similar feel to other games in the genre as they rely pretty heavily on buttons and switches. The addition of the spear does tweak things in some interesting ways though. The puzzles and platforming actually rely quite a bit on the use of the spear. I wouldn’t say that the gameplay is the most original for the genre, but it still succeeds at doing what is most important. The gameplay is fun and should be enjoyed by anyone with any interest in the puzzle platforming genre.

I think one of the main reasons why the gameplay works is that the level/puzzle layout is quite good. For the most part I would say that the puzzles are quite linear. While there might be some slight leeway in how you throw the spear, outside of maybe a couple of puzzles there is only one solution that will actually allow you to progress. Having some flexibility in how you solve the puzzle would have been nice, but the game otherwise deserves credit for creating puzzles that utilize the mechanics well. The game does a good job coming up with new ways for utilizing the mechanics where the gameplay avoids becoming repetitive. In many sections of the game it basically plays like a cooperative game even though you aren’t playing with another player. In many sections you will work with another character (controlled by AI) where you will remove obstacles in their path while they do the same for you. This actually works surprisingly well where if you didn’t know better you might think you were actually playing with another human player. I really enjoyed these sections of the game.

With the gameplay out of the way, lets move onto the atmosphere/story. The game’s visual style was actually one of the things that intrigued me most about the game. The developer deserves a lot of credit for the game’s visual style. The graphical style reminds me a lot of a hand painted painting which looks really nice. It is hard not to admire the background and other elements on screen while playing the game. The character design and the world itself are interesting and create a world that you want to explore. Unless you for some reason dislike the hand painted look of the game, the visuals are one of the game’s greatest assets.

I had more mixed feelings when it came to the game’s story. The game decides to go with a more abstract story. In fact I don’t believe the entire game has one spoken or written line of dialog. Instead the game tells its story through cutscenes and background elements. Because of this you have to interpret the story on your own as it doesn’t come right out and tell you much. At its simplest level the game is about the main protagonist (San) and the friends they make along the way fighting back against an evil robotic force that is trying to destroy everything that they hold dear. I wouldn’t say that the story is super deep, but it is interesting enough. The story is kind of open ended where you can get what you want out of it.

So I am going to preface this by saying that I play a lot of puzzle platformers. I bring this up because I honestly didn’t find Out of Line to be a particularly difficult game. Most of the puzzles I solved immediately and a handful took a couple of minutes to figure out how the mechanics of the puzzle worked. In many cases executing what needed to be done was harder than figuring out what needed to be done. Others opinions may differ, but if you play a lot of puzzle platformers I don’t really see you having much trouble beating Out of Line.

This leads to the other main issue I had with the game. Out of Line is not a particularly long game. The length will depend somewhat on how long it takes you to solve the puzzles and whether you search for the hidden locations/collectibles. I would guess that most players could probably beat the game within 3-5 hours. I enjoyed playing Out of Line, but I think it could have been a little longer since the gameplay still felt fresh even as the game was reaching its end. The game is quite linear as well which means that there isn’t a lot of replay value outside of just wanting to play the game again. I enjoyed Out of Line and think puzzle platformer fans should as well, but I also think the experience could have been longer.

While not quite perfect, Out of Line is a good puzzle platformer that I think most fans of the genre should enjoy. The game shares a lot in common with your typical puzzle platformer. The one thing that distinguishes the game though is the addition of a spear which you can throw to create platforms for yourself and to solve puzzles. The gameplay is fun mostly because the puzzle/level design is good. The game’s hand painted visual style is fantastic as well. Maybe it is just because I play a lot of games from this genre, but I didn’t find the game to be particularly difficult. This leads to the game being pretty short as most people could probably finish it within 3-5 hours.

My recommendation for Out of Line comes down to your thoughts on puzzle platformers and the overall atmosphere of the game. If you don’t really care for the genre or don’t like the hand painted look, I don’t think it will be for you. As long as you aren’t looking for a real challenge though, fans of puzzle platformers should enjoy Out of Line and should consider picking it up.

Out of Line Nintendo Switch