Created in 1912 the Oreo cookie is possibly the most popular cookie in the entire world. While the brand is really popular and I have seen quite a few weird games, I have to say that I would never have anticipated that there would have ever been a board game made based on Oreo cookies. After all how would you make a board game based on a cookie? Well it turns out that it must not be that difficult as there have actually been two different Oreo board games made. Today I will be looking at the 1988 Cadaco board game Oreo Cookie Factory Game. The Oreo Cookie Factory Game has a lot of charm but in the end you are left with another very generic children’s memory game.

Place all of the cookies face down on the table and shuffle them up. Place one cookie on each cookie space on the gameboard. Each player takes a cookie jar. The players decide who will start the game. 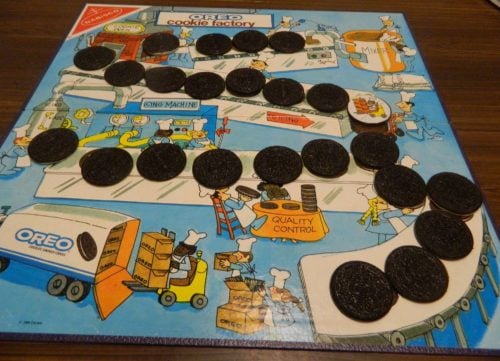 The current player chooses one of the Oreos and turns it face up so all of the players can see the picture on the other side. Then the player will look at another cookie without showing it to the other players. If both halves of the cookie show the same picture, the player reveals the picture on the second cookie to the other players to verify that they match. The player then adds both halves to their cookie jar. The current player then gets to look at two more cookies. 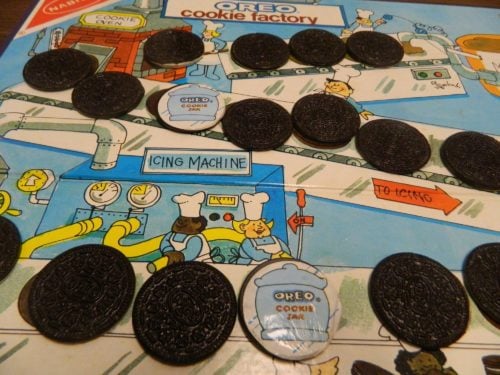 This player has found a match so they will get to take the two matching cookies and add them to their cookie jar.

If the two halves do not match, both halves are flipped over and placed back on the spaces that they were taken from. The next player then takes their turn. 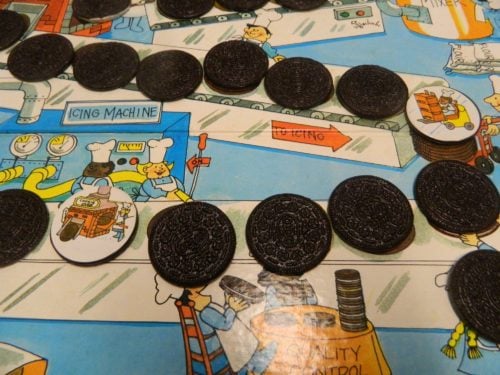 This player did not find a match so they will turn both Oreos back over and the next player will take their turn.

The game ends when all of the cookies have been taken from the gameboard. Each player counts up how many cookies they collected. The player with the most cookies wins the game. 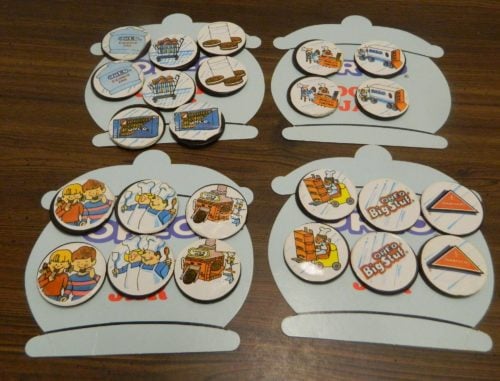 The player in the top left corner has found the most pairs so they have won the game.

The only somewhat unique mechanic in the game is the fact that you only have to show your first cookie to the other players. You can keep the filling of the other cookie secret from the other players. While this isn’t a big change to the formula and is far from original, it is a good addition since it adds a tiny amount of strategy to the game. If both cookies were revealed to all of the players the game would rely entirely on who gets lucky and who has the best memory. With one cookie being kept secret each player has some information that the other players don’t have. It doesn’t drastically improve the game but gives players a little control over their fate.

When compared to other memory games I would say that the Oreo Cookie Factory Game is on the easy side of the spectrum. The game has a recommended age of 4-8 and that seems to be appropriate. The game requires no reading as players only have to match pictures. The main reason why the game is easy is due to their only being twelve pairs in the game. With only twelve pairs it is pretty easy to remember the locations of previously revealed cookies and it is not that hard to guess correctly.

The game’s difficulty is a key factor in determining who will enjoy the game. I have a hard time seeing the game being very enjoyable for adults. The game is just too easy for adults. Without much challenge the game will become boring pretty quickly. The simplicity might work well with younger children though. I can see younger children and their parents enjoying the game especially when you factor in the cookie theme. I think there are quite a few better children’s memory games out there though.

The gameplay in the Oreo Cookie Factory Game might be far from original but I would say the game’s components are quite a bit better. While the components might be a little on the cheaper side, they are quite charming. The plastic Oreos are really nice and actually look quite a bit like the cookies. The stickers are a little on the cheap side though. The game’s artwork is also really charming. I will say it is a little weird that the components look much older than they actually are. If I didn’t know the age of the game I would have assumed it was from the 1960s or 1970s and yet it was released in 1988. This isn’t meant as an insult as the game shows a lot of the charm of an older board game. I think Oreo/cookie collectors will really appreciate the game’s components.

The Oreo Cookie Factory Game has charm but is not a very good game. At its’ core it is a simple children’s memory game. Players try to find matching cookies and whoever finds the most wins the game. If you have ever played a memory game before you should already know what to expect out of the gameplay. Being made as a children’s memory game, the Oreo Cookie Factory Game is on the easy side. With only twelve different pairs the game is quite easy for anyone other than young children. While young children might find the game to be enjoyable, adults will likely find the game to be quite boring. Probably the best thing about the game is the components which are quite charming.

If you would like to purchase the Oreo Cookie Factory Game you can find it online: Amazon