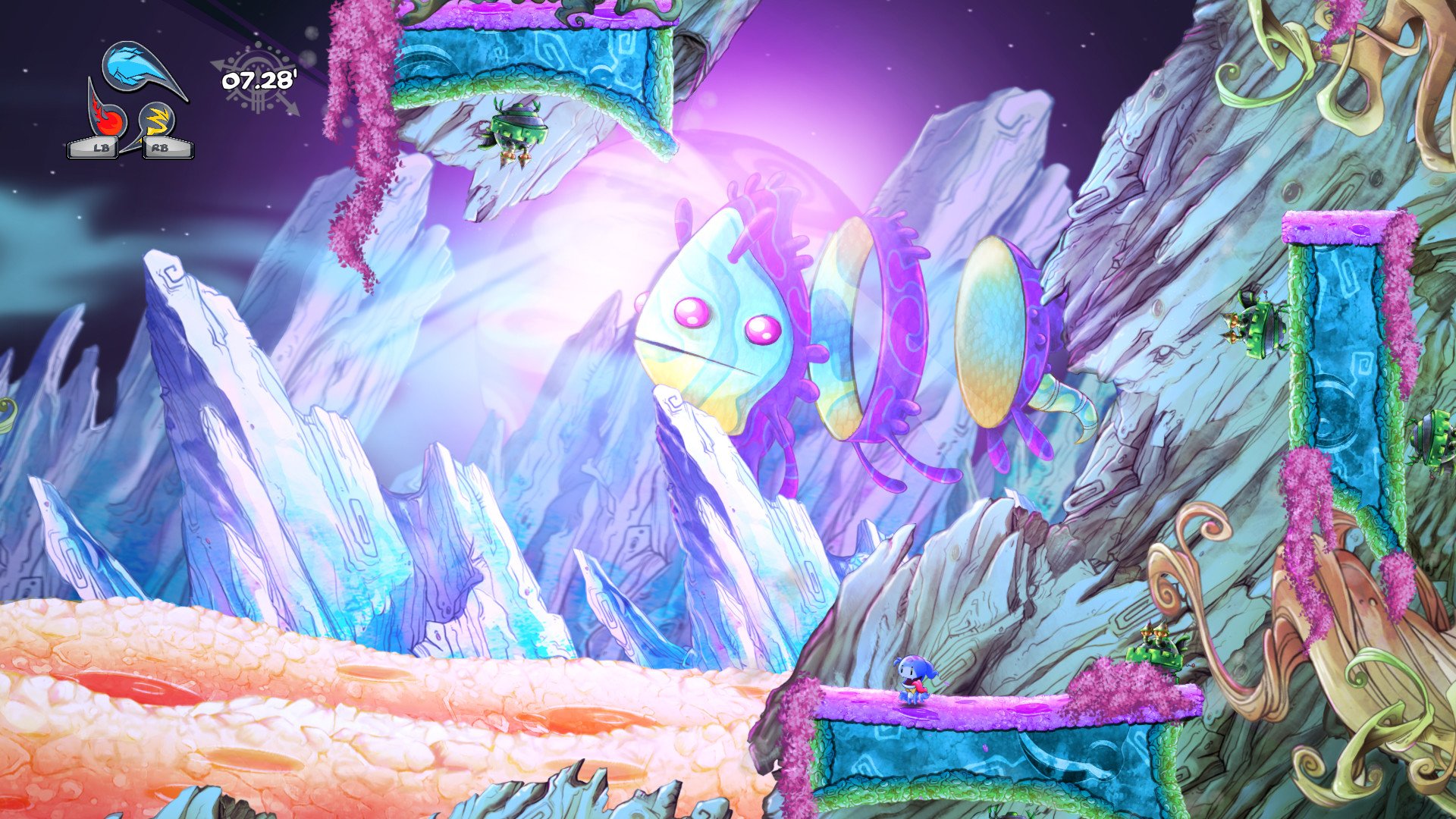 When I received information about OkunoKA Madness in my inbox, I immediately thought of one game in particular. That game is Super Meat Boy and honestly, if you watch ten seconds of the trailer it’s impossible not to see the similarities. OkunoKA Madness is obviously heavily inspired by Team Meat’s classic platformer and that’s completely okay. I don’t have any problems with games that borrow heavily from a winning formula, even outright clones are okay as long as they’re good and do their own level design. While it obviously has its own level design, OkunoKA Madness definitely borrows heavily from Super Meat Boy, to the point of being a pseudo-clone with just one somewhat major addition. However, even if it’s similar enough to be considered a “clone,” it’s one of the good ones and definitely worthy of a recommendation for most fans of hard platformers.

If you’ve played Super Meat Boy, you pretty much already know the deal with OkunoKA Madness. For those who haven’t, OkunoKA Madness is part of a sub-genre of platformers known as the masocore platformer. As you can probably guess by the masocore part of the name, games in this genre are purposely made to be as hard as humanly possible and will often require 50, 100, or even more attempts before you can complete a level. Levels are usually short to keep the frustration to a minimum but only experienced platformer fans or those willing to die hundreds of times will get enjoyment out of these “masochistic” games. OkunoKA Madness includes over 100 levels, hidden secrets, speedrunning modes, a “madness” mode (which makes the game even harder), and more.

Whenever I evaluate masocore platformers, I have a few rules for what I think makes a good game in the genre. I’m not as strict with rules like these for most other genres but I feel like games that are purposely made to be incredibly difficult need a set of ground rules to help prevent gamers from becoming frustrated with them. I have four rules that I apply to this sub-genre. 1) The game should be tough…but also fair. If you are constantly dying in cheap ways due to little fault (or no fault) of your own, the game’s not really what I would consider fair. For example, having a section that requires extremely precise jumping is 100% fair. However, throwing in random elements you can’t prepare for is not a good idea. 2) Games in this genre absolutely, positively need to have good controls as you need precise movements in order to stand a chance on these levels. If you can’t trust the controls to do their job, it’s going to lead to a painful experience so I always want them to be as tight as possible.

3) Levels should be pretty quick (or have checkpoints) so you don’t have to keep doing the same things over and over again that you have already mastered. Nothing’s more frustrating than learning how to do the first part of a level so well that you could do it in your sleep but not being able to complete a section a minute down the road. This means you have to keep re-loading the level over and over again and beat that first section upwards of 50-100 times (which can be very time consuming and annoying). Games in this genre should try to keep levels down to 30 seconds or less (or add checkpoints if they need to be long) to keep the frustration down. 4) Finally, deaths need to be relatively quick and painless. Basically, make sure to keep your load times down so that you don’t have to wait 10 seconds every time you die for the level to load again. And definitely don’t have any sort of lives system (or at least make it optional) that makes you completely restart or lose progress on levels you’ve already completed.

Thankfully, I would say OkunoKA Madness passes three of these four tests with flying colors and only fails the fourth on a few levels. The game passes the tough but fair, good controls, and load time tests with no problems. However, in regards to keeping the levels short I would only give OkunoKA Madness a B or C as there are definitely a few longer levels in the batch that can be frustrating to play over and over again. I personally would have broken some of these levels up into two separate ones but I guess it’s not the end of the world if a few levels are overly long. Even Super Meat Boy had a few of these so it isn’t exactly a deal-breaker.

Pretty much the only major difference between OkunoKA Madness and Super Meat Boy comes with the addition of a few “powers.” Unlike Meat Boy, who Edmund McMillen specifically never wanted to level up with suits or anything like that, your character in OkunoKA Madness does have a few powers of sorts. He has the power to activate certain walls and floors by using elemental powers. Certain walls and floors are outlined in either red, blue, or yellow which can be switched on or off by using a button on your controller. Often you will have to alternate from the red fire platforms to the blue ice ones, activating and jumping between them. It’s not a major addition to the Super Meat Boy masocore platformer formula but at least it changes up the game a bit. It also does make OkunoKA Madness even more difficult as it is sometimes hard to juggle multiple different elements with the same button.

Other than that, there’s not a lot to say about OkunoKA Madness. It’s a Super Meat Boy clone but a good to very good one. If you’re looking for something new in this somewhat uncommon sub-genre, this is a pretty good option. I don’t see a lot of fans of the genre being disappointed with this title. At $17.99 it may be a tad bit overpriced but it does offer a lot of levels and modes that sweeten the pot. Ultimately, I would recommend OkunoKA Madness to its intended target audience (fans of hardcore platformers). As usual with this genre though, I don’t see many non-fans enjoying their time.