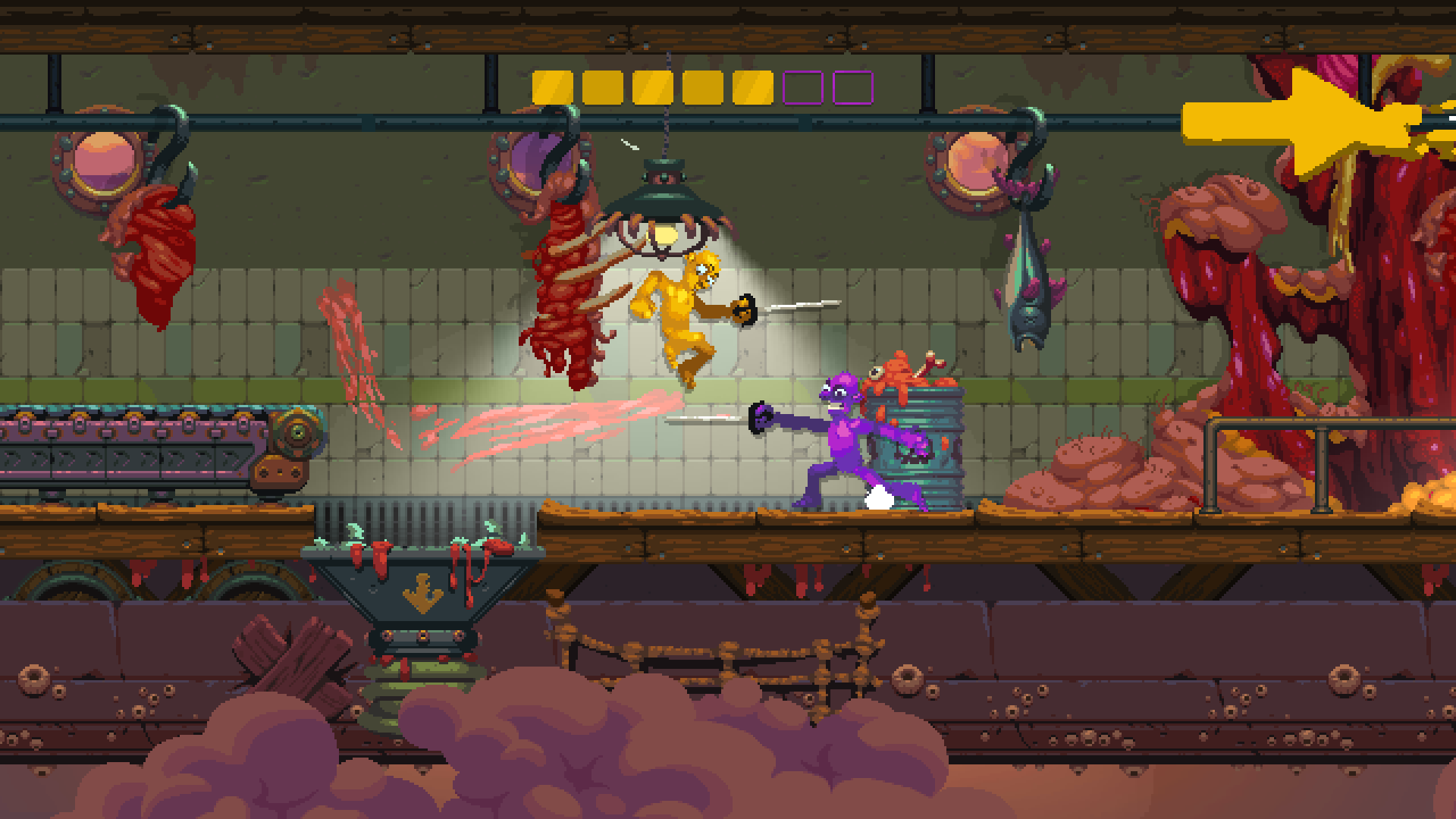 Released back in 2014 the original Nidhogg was a surprise indie game hit. Nidhogg took a basic fighting game and combined it with a game of tug of war in order to create an interesting experience. Three years later Nidhogg 2 has been released with a new graphical style and some tweaks to the original game’s formula. While Nidhogg 2 does improve upon the original game, I was left wondering if the additions are enough to justify needing a sequel.

As Nidhogg 2 shares a lot in common with the original Nidhogg, I am going to give a brief explanation of the game to people who never played the original game. In Nidhogg two fighters face off. Each fighter has a sword and the objective is to kill the other player. Once a player kills the other player, they start running towards their goal. The player that was killed tries to stop them before they reach their goal. If they kill the other player they can then start running towards their goal. The match ends when one of the two players are able to make it to their own goal.

The one thing that I liked most about the original Nidhogg was the back and forth “tug of war” mechanic. This mechanic was the main reason that Nidhogg was a unique experience. While the fighting mechanics were fun, the most enjoyable part of the game was trying to run away and avoid your opponent as you tried to progress towards your goal. This tug of war mechanic works just as well in Nidhogg 2. With more stages (ten versus four) Nidhogg 2 slightly improves on this aspect of the game as there is more variety in the stages.

Other than including more stages Nidhogg 2 has two other significant differences from the original game.

I will begin with the weapons since they actually impact Nidhogg 2’s gameplay. In the original Nidhogg there was only one weapon. In Nidhogg 2 there are four different weapons: a long sword, a short sword, a dagger, and a bow and arrow. At first I didn’t give the idea of different weapons that much thought since I thought they would mostly play the same. Outside of the bow and arrow the weapons do share a lot in common but play differently as well. The main difference between the swords seems to be speed and range. The long sword has a longer range but the dagger and short sword seem to swing faster. Each sword seems to have their own strengths and weaknesses. I can see players getting quite a bit of playtime out of the game trying to master all three types of swords.

The one truly unique weapon in Nidhogg 2 is the bow and arrow. Being a game built around sword fighting I was a little cautious about the addition of a ranged weapon into the game. You could always throw your weapons at the other player but once you threw it you no longer had a weapon. The bow and arrow changes things up since it lets you continue attacking at a distance but doesn’t let you deflect the other player’s sword. After playing with the bow and arrow there are things that I like and things that I don’t like. I actually like the idea of a ranged weapon since it adds variety to the game. To combat the advantage of being ranged, players are able to deflect arrows back towards the player who shot it.

The one concern I have with the bow and arrow is that it has the possibility to be kind of cheap. Since you can keep the bow and arrow ready to shoot while running, you can run with it and if you time it right you can shoot off an arrow right after the other player respawns giving them little time to react. If you get really good at the game this might not be a problem but if a level has a lot of straight paths with no obstacles, a player could kill their opponent several times before they even have a chance to react.

The other major difference from the original game is the new graphic style of Nidhogg 2. This seems to be the most controversial change to Nidhogg 2 as a lot of people hate the new graphical style but a lot of people also seem to like it. I personally see myself as somewhere in the middle as I prefer the style from the original game but I can appreciate the new style as well. I think people’s opinions on the graphical style are going to vary quite a bit. I don’t really see the graphical change being a reason to either purchase or not purchase the game though.

Along with the new graphics style, Nidhogg 2 included a character customization option. Overall I liked the idea of the character customization but I think more could have been done with it. The game lets you customize quite a few different parts of your character but the game has less options than I would have expected. I also didn’t really like that the game doesn’t appear to have an option to save your presets. I hope the developers decide to add this option soon (if it hasn’t already been added) as it would save players quite a bit of time if they care about customizing their character.

I think the biggest problem that I had with Nidhogg 2 is the same issue that I had with the original game. While Nidhogg 2 is a fun game, I just don’t see it as the type of game to play for long stretches of time. In my opinion it is more the type of game that you play for a while and then come back to another day. Some people probably have no problems playing the game for hours at a time but I think the game would get kind of repetitive if I played it for longer than 30-60 minutes at a time.

Overall I would consider Nidhogg 2 to be quite a bit like the original game with some slight tweaks. The gameplay is similar with the addition of more weapons  and stages which add some variety to the game. The graphics have significantly changed which some people will love and others will hate. Basically I would say that Nidhogg 2 is a slight improvement over the original game.