To be the first player to get rid of all of their water plant tokens.

Each player puts one turtle on top of each of their water plant tokens (green plant facing upward). The last player to see a Hippopotamus gets to go first. 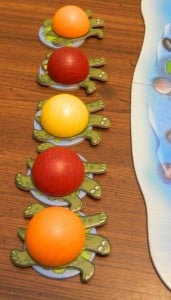 To begin a player’s turn they roll the die and perform an action based on what is rolled. 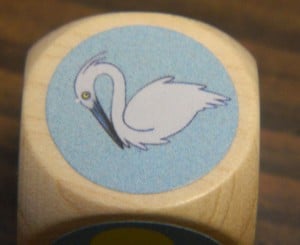 If a player rolls the heron symbol they must move the heron to a different hole on the back of the hippo. If the holes are currently covered by the turtles the player needs to move the turtles out of the way. 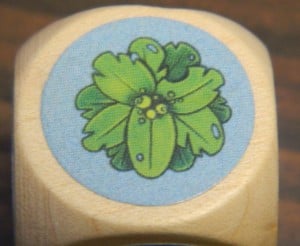 If a player rolls the water plant symbol they get to discard one of their water plant tokens that don’t have a turtle on top of it. 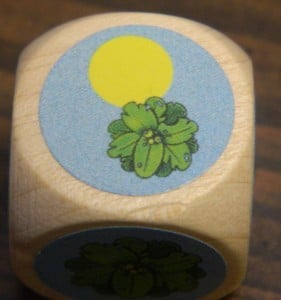 If a player rolls the symbol with the water plant along with one or more colors they will perform two steps. In the first step the player will turn over one of their water plant tokens that doesn’t have a turtle on top of it. A special action will take place based on what symbol is on the other side of the water plant token.

Once a water plant token is flipped over it is removed from the game. 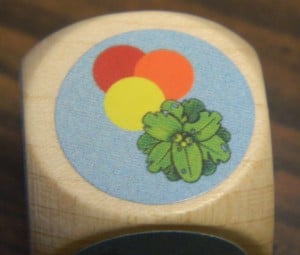 If this symbol is rolled on the dice each player gets to decide which colored turtle they are going to add to the hippo. 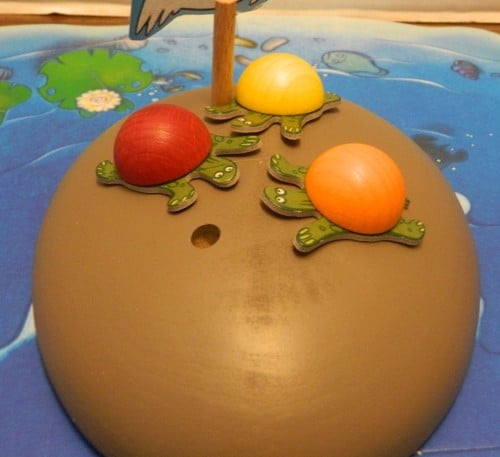 If any turtles fall off the hippo when a player is placing a turtle, the player that was placing a turtle when the other turtles fell has to take all of the turtles that fell and place them on their unoccupied water plant tokens. Any extra turtles are removed from the game. 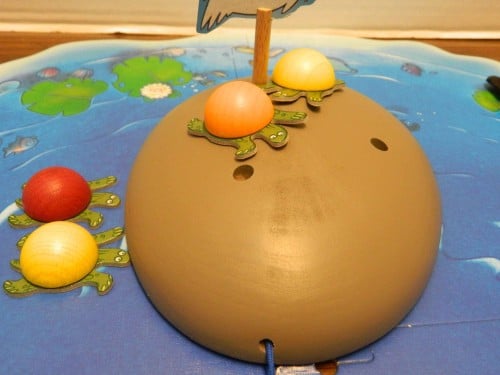 Two turtles have fallen off Nelly. The player who was taking an action when the turtles fell has to take the turtles that fell and put them on of their unoccupied water plant tokens.

The first player to get rid of all of their water plant tokens wins the game.

Queen Games is a pretty well known board game publisher. With hits like Alhambra, Escape, and Kingdom Builder; Queen Games has established themselves as a publisher that makes good light and medium strategy games. In the late 2000s Queen Games decided to launch a children’s line of board games called Queen Kids. Being a fan of some of Queen Games other games and liking the components I decided to pick up Nelly when I found it at a thrift store. Due to some issues, Nelly failed to live up to my expectations.

With Nelly being a dexterity/stacking game you would assume that the gameplay would involve having large stacks of turtles lying on the back of the hippo where players would have to carefully place their turtle to prevent knocking down the other turtles. This never ends up happening in the game. The problem is that at max you can fit three or four turtles on the hippo’s back at any given time before the turtles fall off. Maybe it was just my copy of the game but we tried as hard as we could but could under no circumstances find a way to get more than a three or maybe four turtles on the back at one time. I don’t know whether it is because the turtles don’t grip the hippo’s back well or if the hippo’s back is too angled but there is only a small area where turtles can actually be placed and stay on the hippo.

With Nelly being a stacking/dexterity game this is a huge issue. What makes these type of games fun is the skill required to properly place the turtles and the tension as you wonder if you are going to be successful in placing your piece. Neither are present in Nelly since turtles are constantly falling off the hippo. There is essentially no skill in the game since no matter how good you are at dexterity games it doesn’t matter since your fate is determined by how many turtles are on the hippo when it is your turn to place a turtle. If there are already three or four turtles on the hippo’s back you have very little chance of getting your turtle to stay on the hippo. When players were presented with this situation later in the game they just started placing their turtle in a position that they knew it would fall off but not knock off any of the other turtles. Basically you need to rely on luck that the previous player knocks the turtles off the hippo before you have to place your turtle. Whoever has this happen the most is likely going to win the game.

Turn order ends up being crucial in the game. Players who get to play earlier in the game are at an advantage since they get to play earlier and they also get to play when there are less turtles on the hippo. By the time they have to place their next turtle there is a good chance that a player already knocked all or most of the turtles off the hippo. In a lot of these games it would be beneficial to sit next to a player that is bad at dexterity games. It helps in Nelly as well but not as much as other dexterity games since Nelly doesn’t rely that much on skill since even a player good at dexterity games is going to have issues with Nelly.

Next we come to the roll of the die which adds quite a bit more luck to the game. Rolling the heron is a total waste of your turn since you get no benefit out of it. You aren’t able to get rid of a turtle or one of your water plant tokens. All that can happen is you end up knocking down some turtles which you have to take. Basically you want to roll a symbol that has a water plant symbol since it will allow you to get rid of water plant tokens which is the object of the game. Unfortunately luck comes into play even if you roll a water plant token since you would like to also roll a color that you have a turtle of in order to take full advantage of your roll. Players who get lucky by rolling water plant symbols with colors of their turtles can get out to a big lead since they allow a player to remove a water plant tile in addition to getting rid of their turtles. The winner of each game is likely to be the player that got lucky in this regard.

So after your turn is over you have the job of turning the hippo towards the next player. If there are more than one or two turtles on the hippo, I wish you luck since there is a good chance you will be knocking one or more turtles off the hippo. If you can make it through your whole turn without knocking off any turtles I congratulate you.

Since there is a chance that this issue with the game could be partially due to the condition of my copy of the game, lets look at the game if you could actually fit more than three or four turtles on the hippo at any given time. If this was the case Nelly would definitely be a better game. The game would be more tense since there would be more turtles on the hippo at any given time and there would be a lot more skill to the game. This would make the game more enjoyable since your actions would feel like they actually matter in the game. Even though the game would be better, it doesn’t mean that it would be a good game. Even if this issue were solved the game would be a pretty generic stacking/dexterity game with a cute theme. It would be somewhat fun to play but it would be no better than any other stacking game.

Since this is a children’s game you would think that the game would be mostly for children. While I didn’t play the game with any children I have to say that I would be a little concerned that the game would be too hard for children to play and could become frustrating. I am not fantastic at dexterity games but I would say that I am at least decent at the genre. I found no way you could ever stack more than three or four turtles on the hippo at any given time. The game has a cute theme and is easy to play but I think the game could be kind of frustrating for children.

While the game has a cute concept and some nice components, the game play is just lacking from the game. There is little strategy or skill in the game since you can barely fit any turtles on the hippo at any given time. Since the game lacks skill, it ends up relying heavily on luck. Having a lot of luck in children’s games is not always a terrible thing but Nelly can at times get frustrating as you are constantly knocking turtles off the hippo.

For the most part I can’t really recommend Nelly. The game is a pretty bland stacking/dexterity game and it is just so hard to stack turtles on the hippo’s back which makes the game not that fun to play. If you find the game for cheap and like the concept it might be worth picking up but otherwise I would recommend avoiding Nelly.