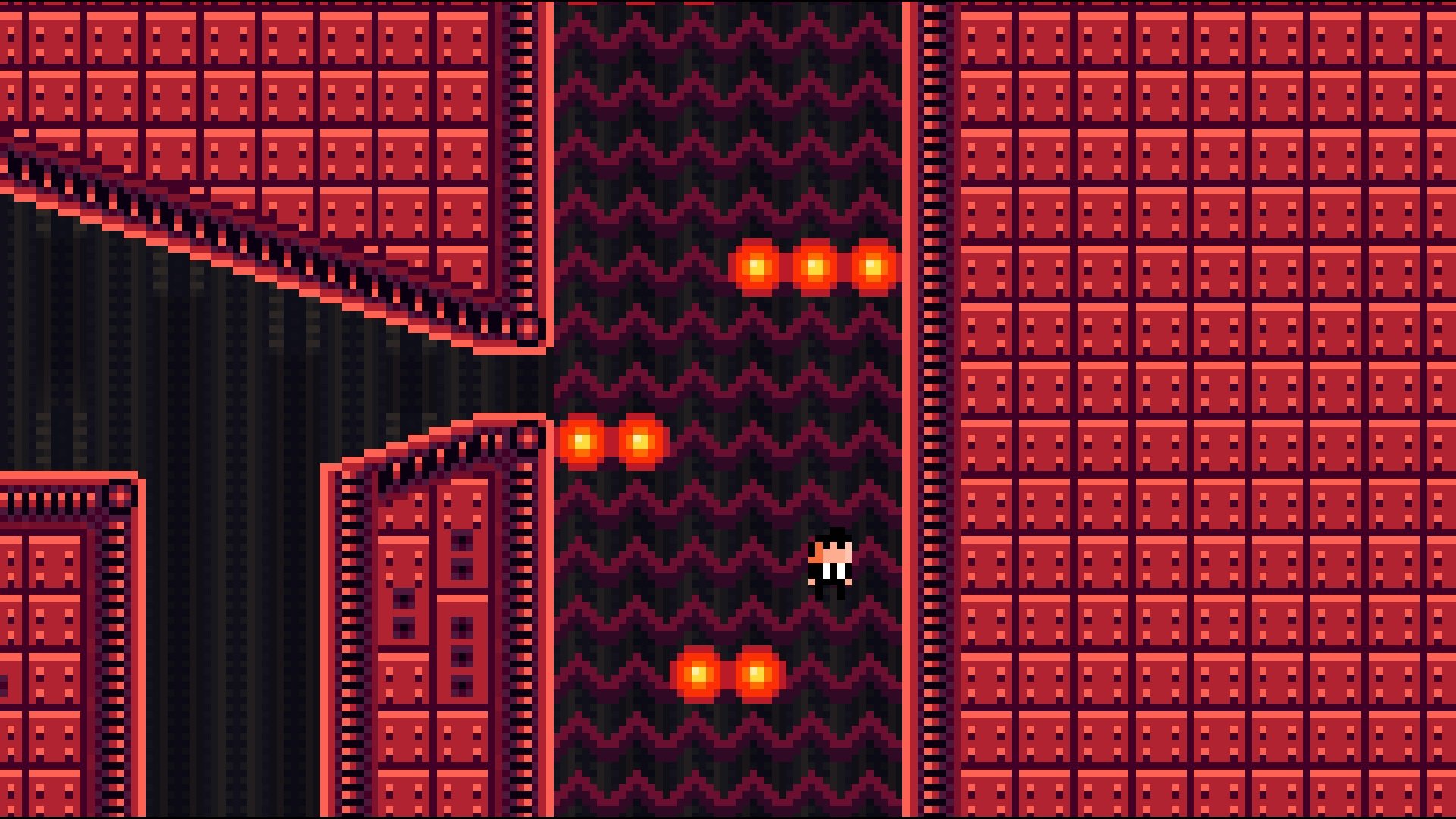 I love difficult video games, but with two conditions. First, difficult games should provide lots of checkpoints so players don’t have to keep redoing things they’ve already done a hundred times and can focus on the obstacle that is currently tripping them up. Second and most importantly, it is essential for these games to be tough but still fair. Necrosphere Deluxe was definitely aiming to be the hardest game it could be and it mostly succeeds in that area. This game is a bit of an oddity though, as it somewhat satisfies both conditions I have for difficult games but also fails a bit as well. While Necrosphere Deluxe is pretty generous with providing lots of checkpoints (solving that problem), you do still have to redo portions of the game as it is a Metroidvania (and one without a minimap to help guide you). In terms of being tough but fair, I think the game mostly succeeded outside of one element. That is the two-button controls, which is an admiral throwback to the older days of gaming but also the game’s worst enemy.

Necrosphere Deluxe is a two-button platformer/Metroidvania game that was released on Steam in 2017 and is now being released on Playstation 4 (the format I played for this review), Nintendo Switch, and Vita. Despite the “Deluxe” part of the game’s title, nothing new seems to have been added to the game. In the game you play as Terry Cooper, a federal agent who was killed in the line of duty and sent to the Necrosphere (a sort of afterlife where you spend your time completely alone with nothing to do). However, Terry learns of a portal that can send him back to Earth, if only he can complete an extremely demanding set of obstacles to reach it. The game advertises itself as a “2.5 hour” game but due to the difficulty, I think it actually shortchanged itself a bit (as it took me 3.5-4 hours to finish and I haven’t even played the short “Terry’s Dream” side story yet).

For the first hour or so, I really enjoyed my time with Necrosphere Deluxe. It’s a unique experience playing a game where you can’t jump on demand (there are bubbles that you can hit that will give you some lift), for the first hour or so at least. The early stages are tough but completely fair. Every time I died, it was my own fault. The game also doesn’t hold your hand, and you will sometimes need to figure out yourself what you need to do to advance. However, once you start getting new abilities, the frustration begins to kick in and the two-button controls start to hurt the game. The first ability you get is a short jump you can use to get over pits and the like. Unfortunately, to use this ability you must push the L1, L2, R1, or R2 button twice in quick succession. Later on, you get a jetpack that can be used by holding one of those buttons. The problem with this is that neither mechanic works consistently (especially the jumping), which makes these portions of the game pretty unfair in my opinion.

It is really frustrating to do the exact same thing over and over again, and maybe 30-50% of the time the jump will work correctly. For achievement hunters, this mechanic is especially frustrating as there are achievements for dying less than 100 times (and one for finishing the game without dying a single time) and you can’t rely on the jump working consistently all of the time. You basically have to take a leap of faith and hope that the controls work properly. I do admire the attempt at mimicking the controls of older games but for a game as difficult as this (especially with how precise you have to be), I don’t think it was the best choice. It turns the jumping mechanic into an “unfair” part of the game in my opinion. I don’t get frustrated often in video games, but this mechanic is one example where I did. The good news is, this should be a pretty easy fix and one I think the game developer should make (or at least give you the option of adding more buttons to simplify the jumping and flying).

Also frustrating for me, the lack of consistency with the jumping made me think I was stuck in a place I couldn’t get out of twice. The first time this happened was during a part in the green world which involves taking a fall of faith and then jumping quickly to the safety of a platform. I think it took 50 tries before I could get my character to even jump properly and I almost gave up and restarted without saving since I thought I was stuck. This is easily the worst part of the game and I guarantee many players are going to get stuck here, as they might not be aware you can even make that jump. The second problem I had came in the purple level and this time I actually did restart the game (as I failed so many times I started to think you needed the jetpack to get out of it and I hadn’t acquired it yet). I then looked up a guide, confirmed my suspicions on what I needed to do, and got the jump mechanic to finally work on my first try of attempt number two. This portion of the game is also quite brutal, requiring you to work very quickly and nail a very tough jump with dodgy controls.

Overall, I would say that Necrosphere Deluxe is a very hard game but some of the difficulty comes from the flawed jumping mechanic (an unfair element in my opinion). A good portion of the game is both difficult and fun but whenever you need to rely on button presses registering correctly, it does get quite frustrating. If Necrosphere Deluxe would at least add the option to jump with a different button (so you don’t have to press it twice and hope it works properly), it would make the game a lot more fun and eliminate the frustration. I just don’t feel it is fair to add artificial difficulty to the game with the occasionally faulty controls. As it is, I would give Necrosphere Deluxe a mediocre 2.5/5 due to how frustrating this mechanic is. With some improvement in the controls (or at least an option to switch to more buttons), it could easily be worth a solid 3 or 3.5 out of 5.