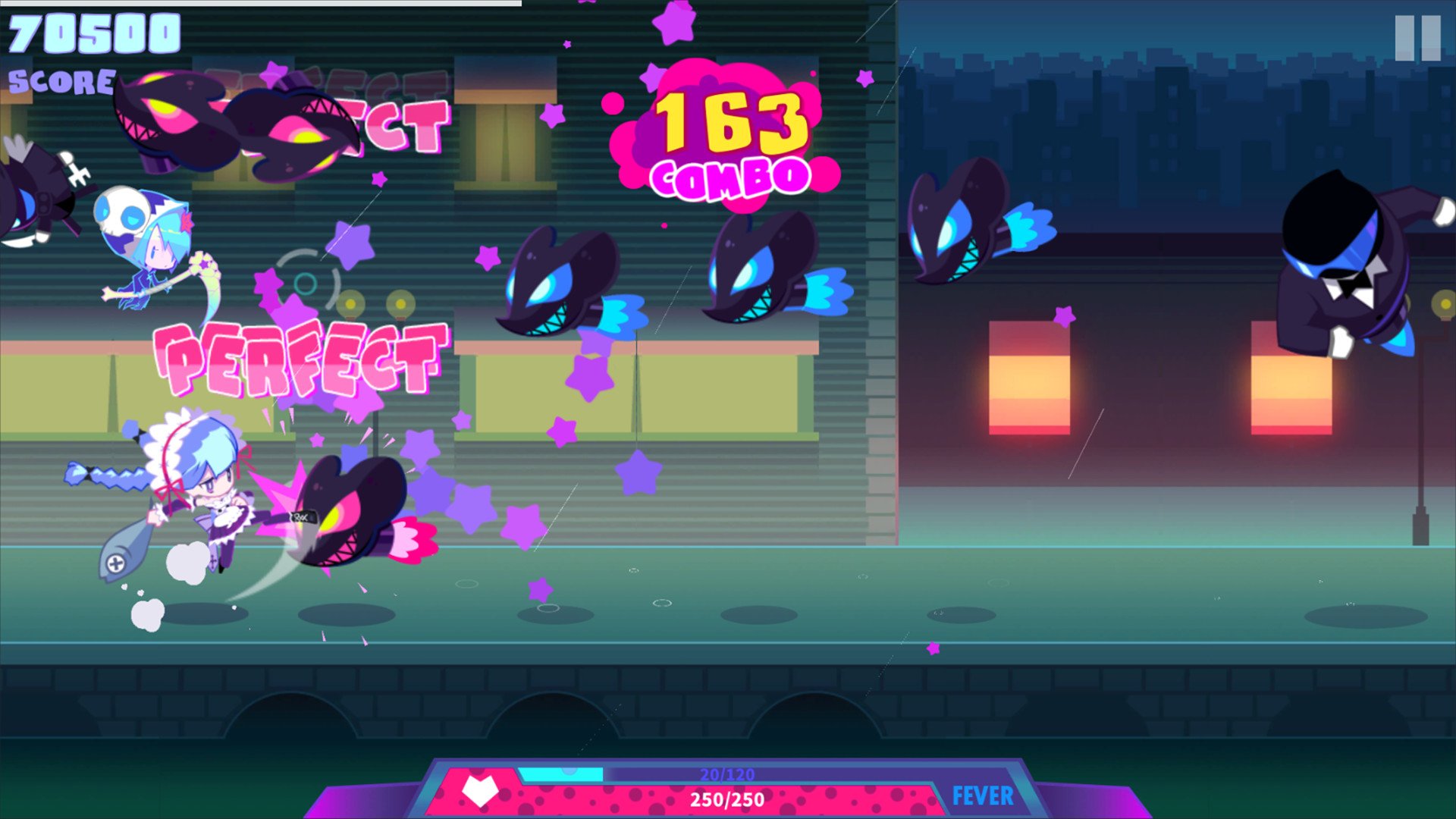 Originally released as an app on the Android and iOS stores, Muse Dash is heading to Steam and Nintendo Switch tomorrow (June 20th, 2019). As I am not much of a mobile gamer, I had never played Muse Dash before and honestly had never heard of it. When I saw it on the Steam store though I was intrigued because the game’s concept seemed interesting. The game seemed to combine your traditional rhythm game with a fighting game where you would attack enemies to the songs’ beat. Muse Dash takes an interesting twist on your typical rhythm game to create a fun rhythm game for fans of Japanese music.

If I were to describe Muse Dash’s gameplay I would say that it is a combination of a rhythm game mixed with a fighting game. Instead of playing musical notes along with the song, you are fighting enemies. Muse Dash basically relies on two buttons. Enemies will move towards your character along the ground and in the air. When the enemy gets close to your character (this is timed to the music) you must use the appropriate button to attack the ground or air in order to hit the enemy. There are also hazards that occasionally pop up along the ground that you have to jump over. Each successful attack increases your combo which will score you more points. If an enemy hits you though you will lose health. If you ever run out of health you will fail the song and have to start over from the beginning. The basic goal of each song is to maximize your score.

After you complete a song you will gain experience points based on how many points you score in the song. You will also score bonus experience if you complete special accomplishments for the song or throughout all of the songs you have played. These experience points are used to gain levels. Each level you gain will help unlock songs. You will also receive two items. When you gather enough of a given item you will unlock an additional character or helper. Each character has their own special abilities which prioritize different playstyles. Some give you more health making it easier to complete a song. Others give you abilities that allow you to maximize your score. While I think the game goes a little too far with some of the characters (more on this later), I like this mechanic as it lets you change the game to fit your playstyle.

If I were to classify the music in Muse Dash I would probably say that it is a mix of J-Pop, chiptunes, and electronic. I am far from a music expert though so that might not be the best description. For the most part I really liked the music as it is pretty catchy. I would say that the music is the game’s best selling point. If you don’t like these genres of music though you will probably hate Muse Dash. The music works really well with the gameplay. I was honestly surprised at how well the game does with matching the enemies’ movement to the beats of the songs. If you have any sense of rhythm you can subliminally know when you need to attack the enemies. The only issue I had with the music is that the songs seemed kind of short for a rhythm game.

Regular readers of Geeky Hobbies might have noticed that I had never reviewed a rhythm game on this site in the past. This is mostly because I have mixed feelings towards the genre. Rhythm games can be fun but they are not a personal favorite. Part of this is because the genre is usually not very original. It feels like once you have played a rhythm game you have played all of them. I actually think Muse Dash does a good job distinguishing itself in this area. Combining a fighting game with a rhythm game is quite clever. Muse Dash’s gameplay may look like every other rhythm game, but it feels different while you are playing the game. In most rhythm games you fail if you miss too many notes. In Muse Dash you only lose if you run out of health. This might not sound like it changes much. If you are good at avoiding enemies though, you can complete a song while missing a lot of notes. If you are close to failing a song you could actively avoid attacking enemies which reduces your chances of getting hit.

The other reason that I am not a huge fan of rhythm games is that I wouldn’t say that I am great at them. In most rhythm games I reach a certain difficulty where I have no chance of ever progressing. Muse Dash is not easy, but I think it does a good job managing the difficulty so players of different skill levels can play the game. This makes Muse Dash more accessible than a lot of rhythm games. The first thing that attributes to this is the fact that there are only two buttons in the game. As you only have to worry about two buttons it lets you focus on the upcoming enemies/notes. As I said earlier the game also does a great job matching up the enemies with the notes of the song.

The best thing about the difficulty is that each song gives you difficulty options. Most of the songs have three different difficulty settings. Each song also has a star rating which gives you a good idea of how difficult the song is. The different difficulty levels can vary between songs, but the star ratings seem to be surprisingly consistent. Songs of the same star rating seem to be around the same difficulty. Most players will probably have their own star threshold. Any song below that threshold you should be able to clear on your first attempt. Every song above that threshold is going to be a struggle to complete. This means that most players should be able to choose a difficulty that is hard enough to be challenging without being frustrating.

On the topic of theme and graphics, I have to say that Muse Dash has one of the most contradictory themes that I have ever seen in a video game. On the surface the game looks like a family game. Like the rest of the game it plays heavily into the Japanese theme. The characters, locales, and even enemies are designed in a way where they are really cartoony and cute. The worlds are full of color and the game is really cheery. I think the game’s graphical style deserves a lot of credit as it is works really well bringing a cute facade to the music.

While it might look like a family game at first, when you look beneath the surface there are adult elements to the game. This comes from the characters that you unlock in the game. While some of the characters are family friendly, I would say others are not so much. The game doesn’t appear to have any nudity, but some of the character models get pretty close as some of the outfits are kind of revealing. The character models also have some suggestive poses to go along with the outfits. This really isn’t my type of game as I think the game took the “fan service” a little too far at times. This is not really a negative for the game though as some people will appreciate it. I mostly bring it up to alert people that the game is not as family friendly as it first appears.

I ended up playing Muse Dash on PC, but it will also be available on Nintendo Switch. I am assuming the game basically plays the same in both versions. There is one big difference between the two versions of the game though. The Nintendo Switch version of the game retails for $30. It includes all of the current DLC along with all of the future DLC for free. Meanwhile the PC version comes with only 30 songs and retails for only $2.39 (initial sale price). On PC additional songs can be added through the season pass. The season pass retails for $18.99 (initial sale price). I was able to try out the first DLC pack and it has around 70 songs. If you end up purchasing the PC version of the game and you enjoy it, I would recommend picking up the DLC as it adds a lot of content to the game.

I would say that the main reason to purchase the DLC (if you like the game obviously) is that it will reduce arguably the worst aspect of Muse Dash. Without the extra songs I can see the game requiring a lot of grinding in order to get the experience needed in order to unlock songs and additional characters. Without the DLC I see you having to play the same songs over and over again in order to advance in the game. If you purchase the DLC there isn’t a huge need to keep replaying songs in order to gain experience as you can just play the extra songs. With the DLC you can probably pick and choose which songs you want to replay instead of having to play all of the songs over and over again.

I am not a huge fan of the rhythm genre, but I had quite a bit of fun playing Muse Dash. The game succeeds for a couple reasons. First the game does something unique with the genre. Combining the rhythm gameplay with a fighter/parkour game is clever. It doesn’t revolutionize the genre, but tweaks it enough that it feels fresh. Second I thought the music was quite good. The songs were catchy, and they worked surprisingly well with the gameplay. The game also does a good job allowing players to adjust the difficulty to fit their skill level. I even liked the artwork for the most part as it is quite cute which works with the game’s music. I do think the game goes a little too far with the fanservice though with some overly suggestive clothing options and poses. The game also relies on a lot repetition if you don’t purchase the DLC.

My recommendation for Muse Dash comes down to your thoughts on the game’s premise and its music genres. If you don’t really like rhythm games or J-Pop/electric/chiptune music, Muse Dash is not going to be for you. People who think the premise sounds interesting though and like this type of music should enjoy the game quite a bit. If that describes you I would recommend picking up Muse Dash. I would maybe start with just the base game, and if you enjoy that picking up the season pass as it adds quite a bit of content to the game.