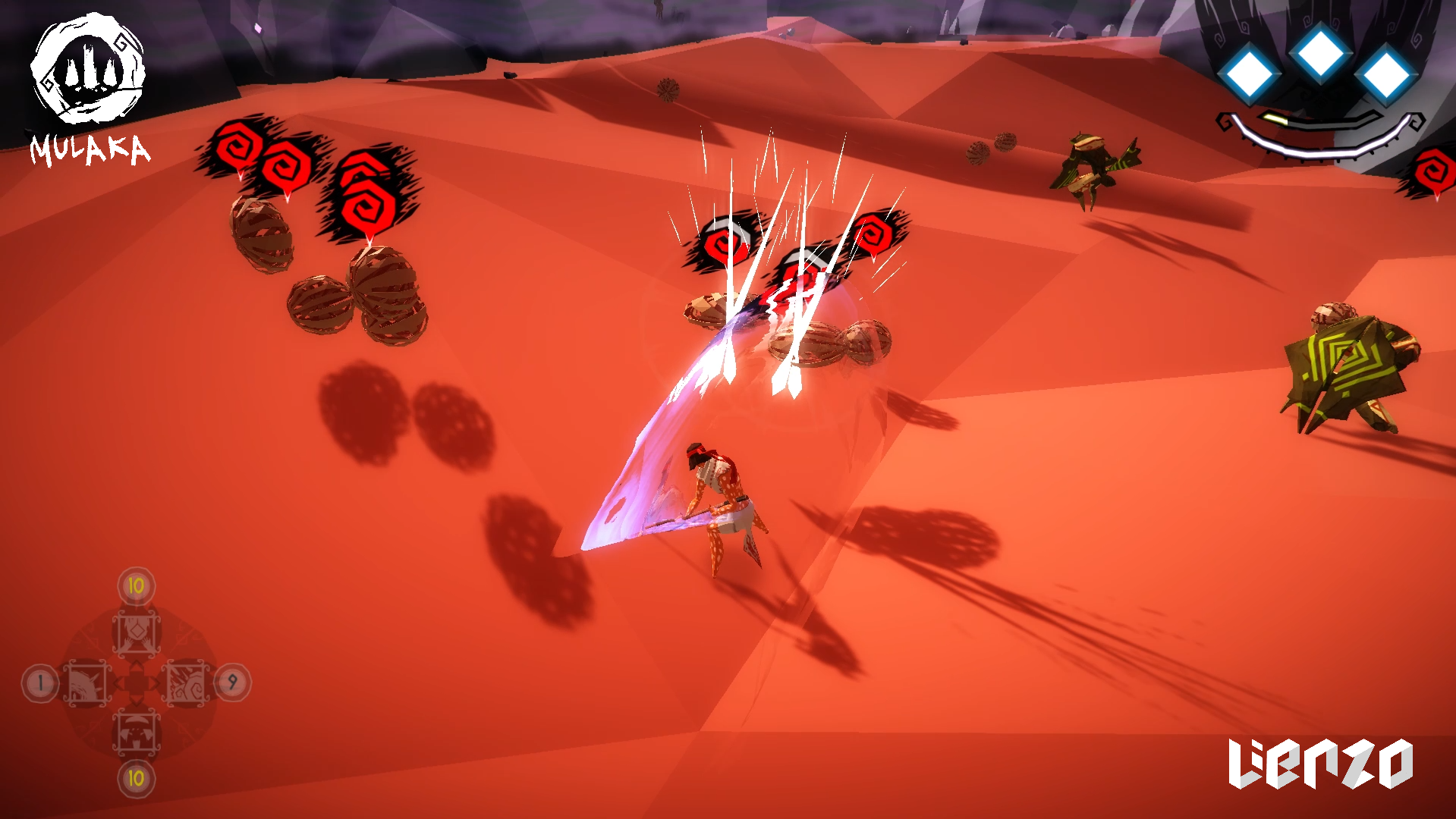 When you first see Mulaka it looks like something that you have never seen before. Most video games take players to other worlds much different from our own. While there are a decent amount of video games that take place on Earth, Mexico is not represented a lot in video games. Mulaka takes its inspiration from the Tarahumara people of northern Mexico and their myths and legends. In Mulaka you play as Sukurúame a shaman of the Tarahumara people. Something is amiss in the world as evil forces threaten its existence. Will Sukurúame be able to save the world in time? While the overall arc of the story is similar to your typical video game, there is something refreshing about playing a game with a truly unique setting. I have played a lot of video games and yet have not played one quite like Mulaka.

While the theme intrigued me, what got me most interested about Mulaka was the gameplay itself. Just looking at the gameplay in the trailer, Mulaka honestly reminded me a lot of action games like Zelda. After playing Mulaka I have to say that it is probably one of the best indie Zelda-like action games you are going to find.

In Mulaka you will be traveling to different areas around northern Mexico. When you enter a new area you are tasked with finding three stones which you will use to unlock the door to the final boss of the area. The player has to explore the area completing different challenges which will give them one of the stones needed to unlock the door. Most of these challenges involve fighting groups of creatures in combat. Some of the stones are acquired from different platforming challenges as you have to reach a given area. Finally some of the stones are given to you after you complete a puzzle.

I would say that the biggest mechanic by far in Mulaka is the combat. I would say that a majority of the gameplay in Mulaka involves fighting creatures. The good thing is that the combat is actually really good. Basically the game gives you a light attack, strong attack, dodge, run, and a ranged attack. You can combine these together to create different combos. At first I was a little worried about the game not having a lock on feature (the ranged attack kind of has one) but you adjust to it pretty quickly as the game sort of guides your attacks towards the enemies. While the combat has a decent amount of button mashing I really enjoyed it because the combat for the most part is fluid and fast paced. The true telling of how good the combat is that even after spending most of the game in combat, I still enjoyed it until the very end of the game.

The combat truly shines when you get to the bosses at the end of each area. The bosses are easily the best part of the entire game. Each boss in the game is unique and requires a different way to defeat them. The bosses actually remind me a lot of the bosses from games like Zelda. One boss in particular even reminds me a lot of Shadow of the Colossus. Basically you have to figure out the weakness of each boss which you then expose to deal damage to them. What I really like about the bosses is that they all feel unique and they really work with the game’s theme. The only issue I have with the bosses is that I wish there were more of them (obviously because they are the best part of the game) and for the most part I would say that they are on the easy side. I think there was only one boss that I died fighting. I lost some health to the other bosses but I never really came close to dying.

The best platforming in the game actually comes towards the end of the game. Throughout the game you will acquire different abilities and the game slowly starts using these mechanics in the platforming aspects of the game. In the later levels the game does a good job combining the gliding and climbing abilities to make some pretty good platforming sections. The problem is that this combination is really only used in the last two areas which is a shame since if these special abilities were introduced earlier in the game I think Mulaka could have been a better platformer.

The third main mechanic in Mulaka is the puzzles. This is one of the few areas where I was a little disappointed with Mulaka. The problem with the puzzles in Mulaka are that they aren’t particularly challenging. Most of the puzzles in the game involve you turning blocks in order to create a path for water to move from the entrance to the exits. These puzzles are somewhat fun but the game uses them too often and except for one of them are really easy. Mulaka would have been better off if it would have included a couple different types of puzzles instead of relying on this water puzzle so much. Other than the water puzzles Mulaka has a couple other puzzles but they aren’t much.

The final small mechanic in Mulaka is a crafting mechanic. This mechanic is not particularly deep and I don’t really have a problem with that. Basically the mechanic involves you collecting plants from around the environment which you will use to create different potions including healing potions and bombs. Outside of collecting the plants there isn’t much to the mechanic since you just press a button which uses up enough of your plants to create the potion. While the mechanic is really simple it works well enough for the game. It adds a little to the game as you have to scavenge plants to make healing potions instead of just having to randomly find them. The mechanic is not so complicated though that it distracts from the rest of the game.

While the Mulaka’s art style might not appeal to everyone I actually really liked it. The game uses more of a simple polygon art style which might not show the level of detail as a more realistic style but I think it works well for the game. It creates a unique style for the game that works well with the game’s theme. For an indie game I don’t think there is much more you could have asked for as far as the graphics are concerned.

Mulaka may have a few small glitches here and there but they don’t really impact the game that much. The biggest issue I had with the game has to deal with the game just being too easy. I already mentioned that the puzzles and bosses are pretty easy. I think the main reason why the game is so easy though is that I think it is a little too generous with players. You will get hit a decent amount in the game but each hit doesn’t hurt you that much. The game gives you three “hearts” and most hits only take off a fraction of one of the hearts. When you do lose health you can easily use a health potion to recover any damage you lose. Since it is usually quite easy to find the ingredients needed to create more health potions you will usually have your max amount of health potions (10) on you most of the time. Unless you are prevented from using a health potion at a crucial time, you aren’t going to die often in the game. I honestly think I only died once in the entire game.

As far as length I wish Mulaka was longer because it is really fun until the very end but the length is fine for an indie game. I would say that the game will take most players around 7-9 hours to complete. If a player wants to rush through the game and just collect the stones and fight the bosses though they could probably shave off a couple hours. I basically tried to collect all of the collectibles I saw but didn’t go out of my way to find collectibles that were hidden. This took me around eight hours to finish. If you want to find all of the collectibles it would maybe add an hour or two to the game’s length.

I started off saying that Mulaka looked like what I would imagine an indie Zelda game to be like. That comparison is actually pretty accurate in my opinion. The game doesn’t reach the levels of a game like Zelda but I really couldn’t have expected much more from a game created by an indie studio. I was genuinely surprised by how much I enjoyed the game as it is one of the best indie games that I have played in a while. I really hope that Lienzo considers creating a sequel or at least creates another similar game in the future. If you don’t really care for these type of action games, Mulaka might not be for you. If you really like this type of game though I would highly recommend picking up Mulaka.