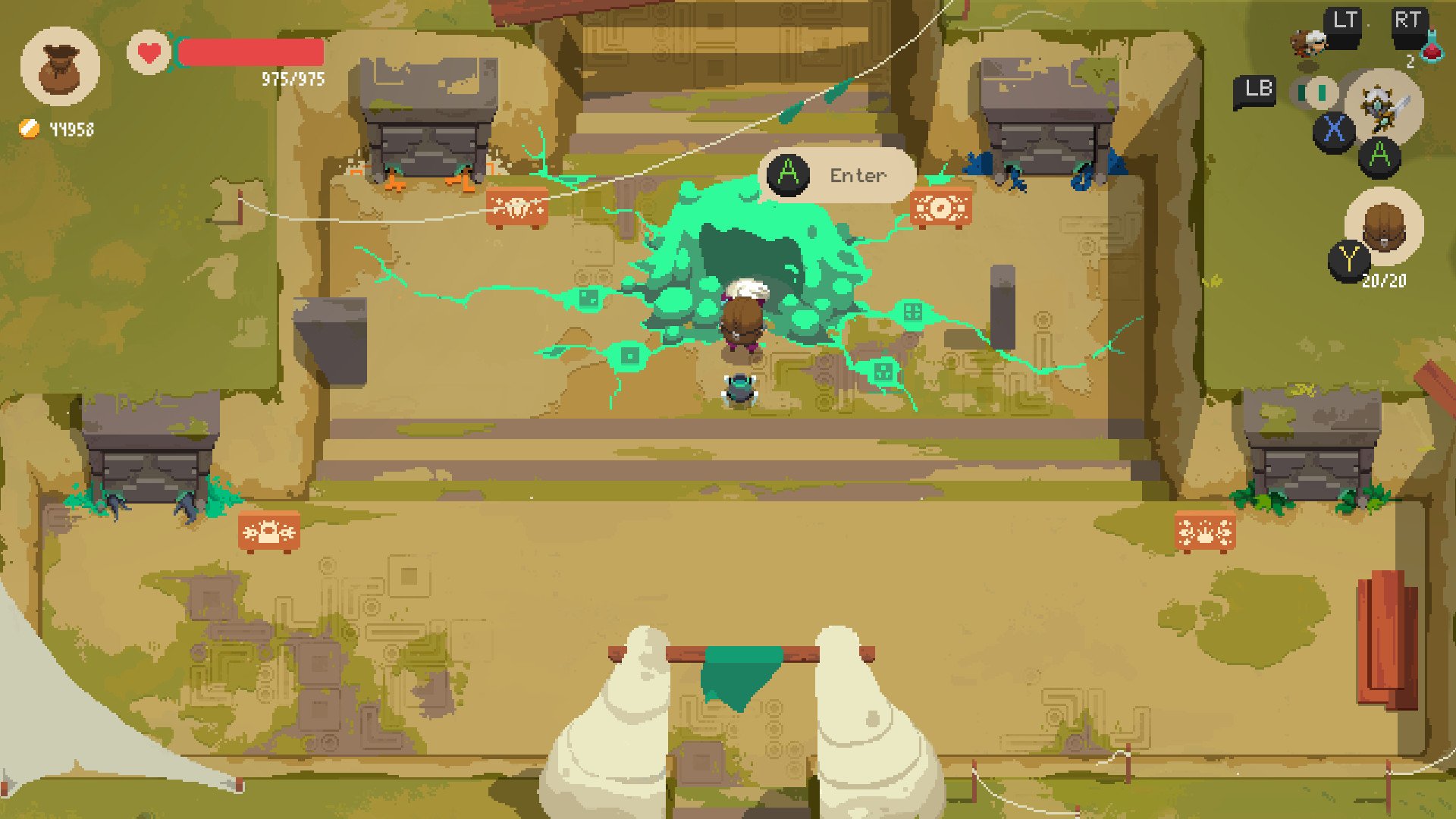 Around a year ago I took a look at Moonlighter. While I am generally not a big fan of the rogue-lite genre, I actually really enjoyed Moonlighter. What was interesting about Moonlighter was that it combined your typical dungeon crawler with a mechanic where you would run your own shop. You basically would raid a dungeon collecting loot. You would then turn around and sell that loot to your customers in order to get enough money to purchase better equipment and explore more dangerous dungeons. I found this gameplay loop to be highly satisfying. As I really enjoyed the base game, I was interested in checking out the DLC. Moonlighter – Between Dimensions is what you expect out of a good DLC, it expands upon the original game adding some interesting mechanics while keeping what was so enjoyable about the original game.

For those who haven’t finished the base game of Moonlighter and are worried about spoilers, you have nothing to worry about with my review of the DLC. There are no spoilers in this review about the ending of the original game as I will mostly only be talking about what the DLC adds to the game.

Moonlighter – Between Dimensions opens up a couple months after the events of Will exploring the fifth door. Rynoka is thriving and has changed a lot in the last couple of months. Then one night the town experiences an earthquake due to a portal to a new dimension opening up outside town. Does this new portal bring with it more riches or there is something more sinister going on? Will once again has to enter the portal to see if it poses a threat to the town and might as well turn a little profit for himself in the process.

As I checked out Moonlighter a little over a year ago, I am not going to waste much time talking about the basic gameplay as that was all covered in my review of the base game. Basically Moonlighter is your typical action dungeon crawler with rogue-lite elements. You traverse dungeons picking up loot which you then sell in your shop. As you acquire more goods and money you can upgrade your weapons and armor allowing you to defeat more powerful enemies. The reason why Moonlighter worked is that the idea of adding a shop mechanic to a dungeon crawler was a great idea. The whole process of exploring a dungeon and then selling off your loot was such a fun idea that worked really well.

For those that are curious Moonlighter – Between Dimensions is a DLC pack that mostly adds content to the end of the base game. The game only really adds one thing to the game that comes into play before the end of the game. It is not a huge addition but the DLC does slightly alter the original dungeons if you actively pursue it. While you are traversing the original dungeons you will occasionally see some shiny green spots over pits in some of the rooms. If you fall into the pits in these rooms you will be transported to a room that has a portal to the new dimension. This new dimension includes new enemies and enemies from previous dungeons as well as your current dungeon. These pocket dimensions are not the actual new portal dimension but they give you a glimpse of what you will face. Each contains a couple rooms with most rooms containing a treasure chest. After a couple rooms you will face off against a mini boss and when you defeat it you will get a special weapon that can only be used in the dungeon (more on this later). You will then enter a portal that takes you to the next level of the dungeon that you began in.

I would say that the DLC doesn’t add a lot of content to Moonlighter until after you beat the base game. The pocket dimensions are a nice touch and help set up the rest of the DLC content. They also provide a sort of shortcut to the next level of the dungeon as well as giving you several chests to unlock. The mini bosses at the end of the pocket dimensions are also interesting to fight as they play differently than a lot of the other enemies available at that point in the game. As long as you have proper weapons and armor for your current dungeon though these pocket dimensions aren’t particularly challenging. The enemies are basically on par with enemies you would find normally in the dungeon that you are currently in.

While Moonlighter – Between Dimensions doesn’t add a lot to the base game, it does add quite a bit to the end game. The biggest addition to the game is the new fifth portal. While the fifth portal shares a lot in common with the other dungeons it is different as well. While the other dungeons are only three floors deep, this new portal is either nine or ten floors deep (I haven’t reached the end yet). Therefore the new dungeon is significantly larger than the other dungeons. You might think how are you ever going to make it through so many levels. The good news is that every couple floors you encounter a slime creature who will allow you to purchase a portal that allows you to teleport to your current level of the dungeon on future trips to the dungeon. I think this is a good addition because it would be hard to get through the whole dungeon unless you came prepared with a lot of potions. These portals also reward you for reaching new levels of the dungeon if you aren’t able to make it all the way to the end.

Other than the size of the dungeon, the other major difference with this dungeon is that it combines enemies from the other dungeons (upgraded to compensate for you being stronger) along with new enemies. I actually liked this idea as it is a good combination of new and old enemies. The new enemies are good additions as they are quite a bit different than enemies from previous dungeons. This forces you to learn new attack patterns to avoid enemy attacks as well as attack them. The one issue with the enemies in this new dungeon though is that quite a few of the enemies are the type that will steal items from you that you can’t get back. Being the hoarder that I am it hurts to loose your hard earned loot. It also becomes a pain when they steal items that you need for your next upgrades. This makes you have to return to the dungeon more often to get the required materials for your next upgrades.

The other reason that previous items are important for the DLC is that the game introduces a new mechanic of trading items. A new merchant will arrive in town which you can trade with. Customers will also come into your shop looking to trade items. Basically when you are presented with a trade opportunity the trader/customer will be looking for a type of item and will offer other items in exchange. You can barter and try to offer less but you need to trade the items that they are looking for. A lot of the items that these people are looking for in trade though come from previous dungeons so you will have to store items from previous dungeons if you want to do a lot of trading.

Basically Moonlighter – Between Dimensions is what you would expect out of a DLC. It is basically more of what made the original game enjoyable. It doesn’t drastically change the gameplay but it adds a few small tweaks to keep things interesting. The game adds some challenge to the game while also encouraging players to continue exploring the earlier dungeons for loot to use for upgrades and for trades. I enjoyed the DLC quite a bit and fans of Moonlighter should enjoy it as well.

I personally haven’t experienced any bugs but it does seem like some players are encountering some bugs with the DLC. This is somewhat to be expected as whenever you add a significant amount of content to a game it will lead to some bugs. The developers are working hard to fix these issues though as they have already added a couple patches to fix issues that some players have encountered. I would guess that soon all of these issues should be resolved.

My recommendation for Moonlighter – Between Dimensions is pretty straightforward. If you didn’t really care for the base game, Moonlighter – Between Dimensions doesn’t change up enough to make you more interested in the DLC. If you have never played the original game, I would probably recommending trying out the main game for a while before deciding on the DLC as most of it can’t even be accessed until you beat the rest of the game anyway. If you liked Moonlighter though I think you will love the DLC and I would recommend picking it up as it adds interesting content and gives you a reason to come back to Moonlighter.