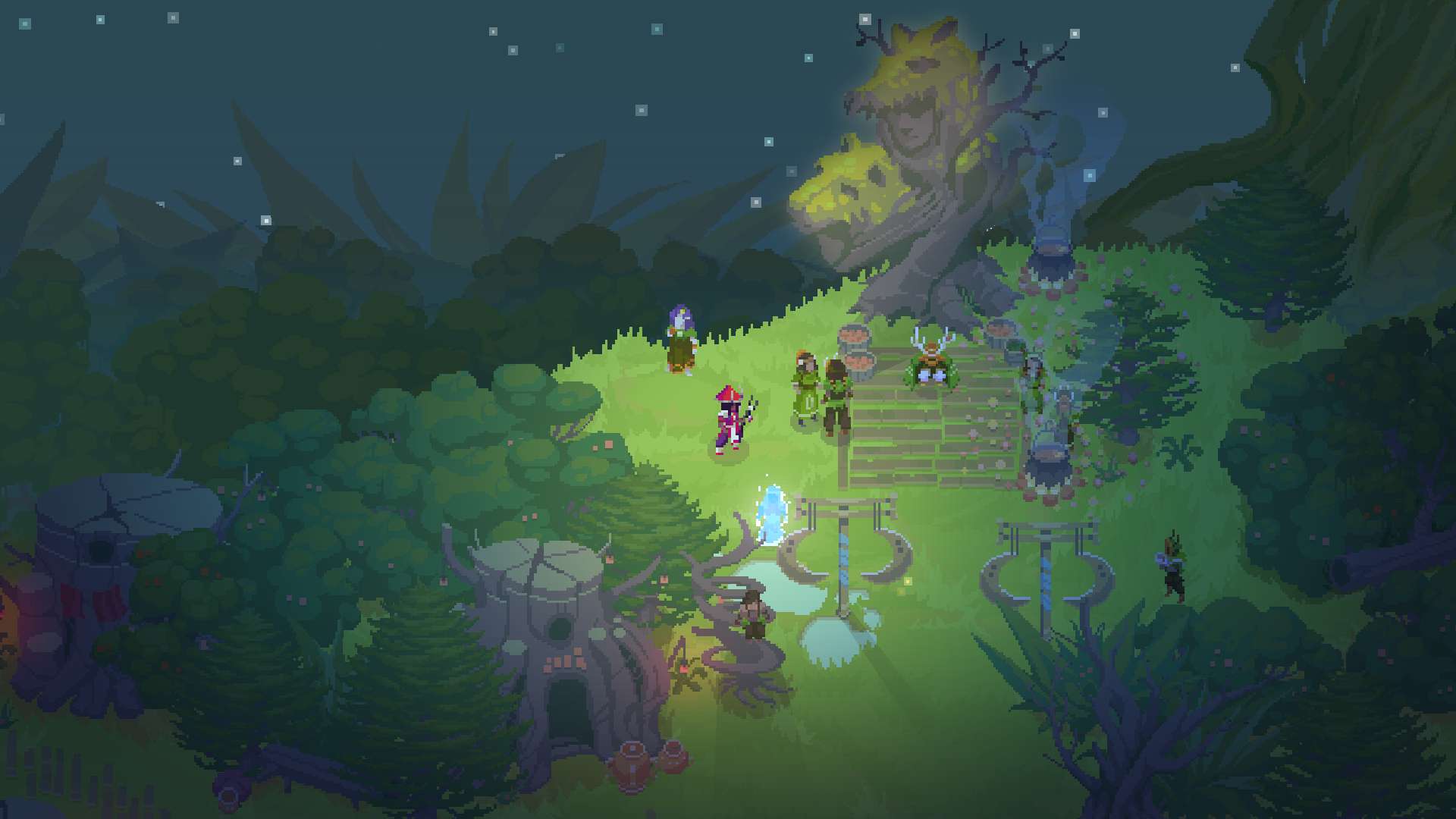 In Moon Hunters you and up to three friends play as one of six heroes who are trying to find the missing Moon Goddess. You will journey through the lands fighting the forces of evil as you try to find out more information about what happened to the Moon Goddess.

Moon Hunters plays a lot like other 2D action adventure games like Zelda and Diablo without the puzzle solving or loot collecting. Basically you go around the world fighting enemies with melee and/or ranged combat. Each game (around 45-90 minutes long) has you and your partners choosing locations to explore which include a randomly generated map with random encounters spread around it.

The one area where Moon Hunters distinguishes itself from other games is the emphasis on story telling. Each game has you playing as a different hero of legend and tells the tale of that hero. You will be presented with various decisions/events and how you react to them will change the course of the story. For every decision in the game that you make you will gain some stat boosts based on what decision you made. Most events will also give you a special attribute/characteristic that will give you options for events you will encounter later in the game. Each game ends with a telling of your heroes’ story which includes a recap of decisions/actions you chose as well as the final fate of your character.

The best part of Moon Hunters is the emphasis on story and that every decision you make in the game has an effect on you for the rest of the game. Having stats derived from the decisions you make is a really interesting idea since it makes your decisions impact the gameplay as well as the story. It may even force you to make decisions you wouldn’t have otherwise made just to get a specific stat boost.

Other than giving you stat boosts, your decisions will have other effects on your game. The game includes many different events/actions and your decisions in one can impact what you will be presented with later in your journey. To engage in some of the events you need a specific attribute/characteristic which can only be achieved by making a specific decision in a prior event.

The part I liked most about the story is the legend of your hero that is produced when you finish your game. While I wished your decisions had a little more effect on the main story, your decisions have a real effect in this area. The legend of your character is a really cool idea as it retells your journey and gives more backstory on what happened to your hero after their adventure. All of these stories are saved as well so you can look back at the previous games that you have played.

While the story seems to be the main emphasis of the game, the gameplay is also quite good. The controls are simple (requiring only a couple buttons) and are really precise. If you like 2D action adventure games like Zelda (without the puzzles), Diablo (without the loot) or even games like Gauntlet, I think you will have fun with Moon Hunters. The game plays perfectly fine as a single player game but it plays better as a co-op game.

On top of all of that the game has great production quality. The graphics/artwork are really good. The music fits the game perfectly. Even the voice work is well done. Kitfox Games definitely put a lot of effort in creating an engaging atmosphere for the game.

By far the biggest problem with Moon Hunters is the fact that you will be replaying the same content over and over again. The game presents you with a lot of different events/options but you will regularly run into the same events over and over again. The more you play the game the more likely it is to happen as well. After you encounter the same events a couple times, the repetition can get frustrating.

This is most evident with the final boss fight. Unless I have yet to find the right events to change it, you will always fight the exact same boss to end every single game. The boss is not particularly difficult to begin with and by the third time you fight it, it kind of becomes more of a chore than anything else.

The other problem that I had with Moon Hunters deals with the difficulty. Moon Hunters is just not a very difficult game. If you have experience playing these type of games, you won’t be challenged by Moon Hunters. If you are decent at dodging attacks and quickly pressing the attack buttons you shouldn’t have any troubles with the game. This is not necessarily a bad thing if you are playing co-op with players that don’t play a lot of games. The game is simple enough that new players won’t feel overwhelmed and want to quit. If you are playing with other experienced players though you aren’t going to feel very challenged by the game.

The real length of the game comes from exploring the world and finding all of the different events that pop up around the world. Moon Hunters seems to have a lot of different events/decisions to run into. If you want to see everything to fully explore the story you can spend a lot of time with the game. It will take many games to see everything that the game has to offer since the game limits how much you can see in any given playthrough.

Moon Hunters is a very interesting game. Moon Hunters does many things so well. Moon Hunters is a fun game that has precise controls, great graphics, good sound, and an interesting/innovative story where every decision has an impact on the story’s ending. Everything is great about the game except for two things. First the game is too easy which means it won’t be much of a challenge to experienced gamers. The bigger problem though is that you keep encountering the same events over and over again. This gets repetitive quickly.

If you like 2D action adventure games I think you will enjoy Moon Hunters. If you have other people to play the co-op with, you will likely enjoy the game even more. The question of whether to buy the game for full price or wait for a sale depends on whether you think you will continue to play the game after running into the same events time after time. If you plan on fully exploring the story, I think it is worth picking up at full retail. If you only plan on playing through the game a couple times though I would probably recommend waiting for a sale.