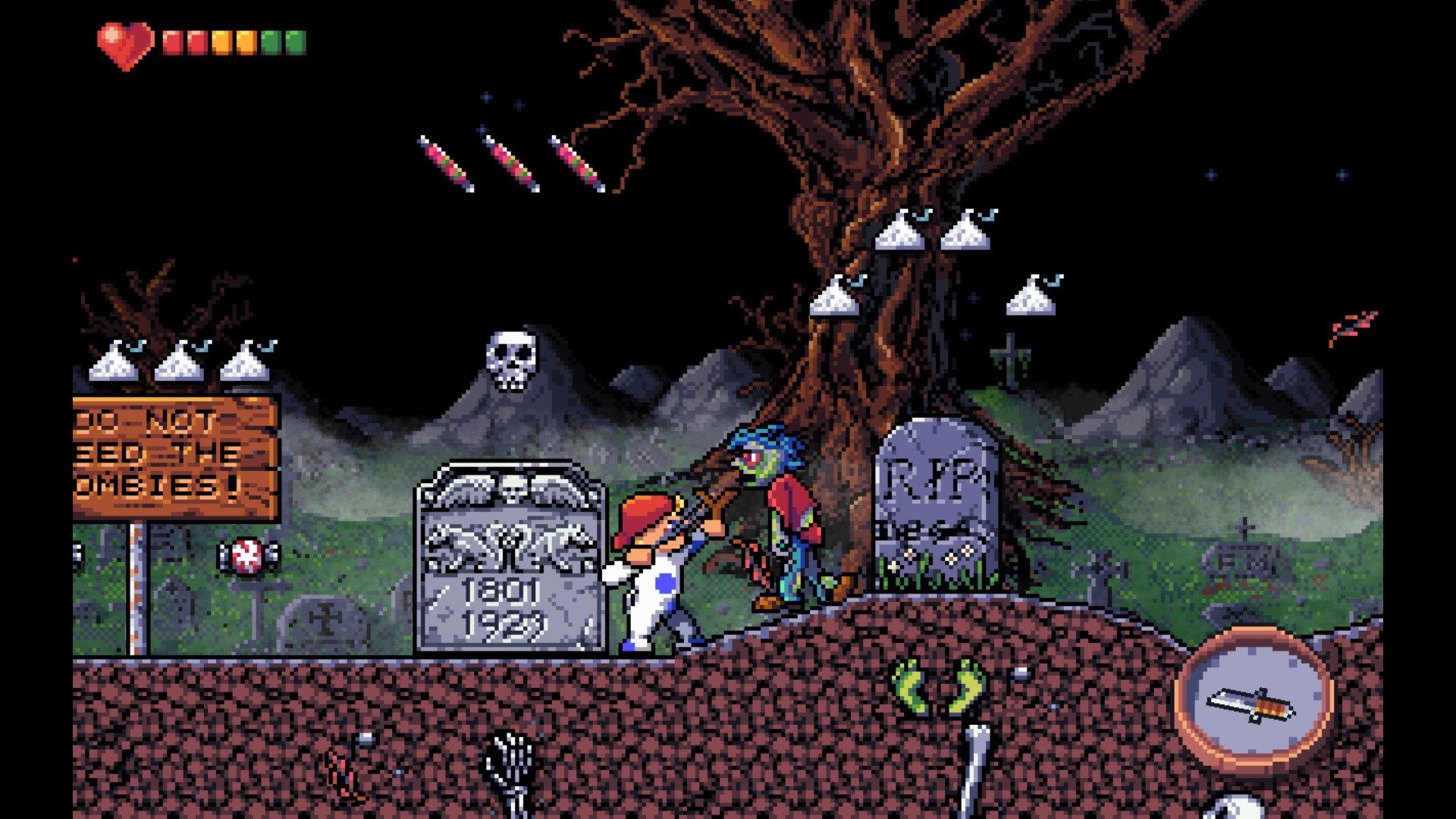 Growing up in the early 1990s I fondly remember playing a number of Apogee Software games when I was a kid. In particular I was a big fan of the Commander Keen series. The company made a lot of pretty popular games back in the early 1990s until gaming tastes started to change. In recent years some of the classic games made by the studio have started to receive the HD treatment. A while back I took a look at Secret Agent HD which I really enjoyed. Today I am taking a look at Monster Bash HD which is a remaster of the original game released back in 1993. I don’t remember ever playing the game back when I was a kid, and yet I was still intrigued to check out the game as there is something charming about this almost forgotten era of video games. Monster Bash HD is a pretty faithful recreation of the original game which should delight fans and might even attract those retro action platformer fans who never played the original game.

In Monster Bash HD you play as Johnny Dash. Johnny’s dog Tex was kidnapped by the villain Count Chuck. Armed with his slingshot and a never ending supply of rocks, Johnny must defeat Count Chuck and his minions to rescue Tex and all of the other neighborhood pets that have been kidnapped.

Monster Bash HD’s gameplay is pretty reminiscent of the early 1990s era of video games. The game is a combination of a 2D platformer and an action game. You are given a slingshot which you can shoot left, right and at 45 degree angles. There are enemies and other obstacles that stand in your way that you must shoot with rocks in order to destroy them. You are also given a jump and crawl which you will use in order to avoid the obstacles that get in your way.

The game is divided into levels. The objective of each level is to rescue all of the pets hidden throughout the level in cages. After all of the pets have been rescued, you can then enter the exit. You will score points for all of the collectibles you pick up as well as any secrets you find. Each time an enemy or obstacle hits you, you will take damage depending on the difficulty level you chose. Unlike the original game there is no limit on your lives, but each death will lower your final score for the level. When you die you will be returned to the last checkpoint that you reached.

I have played a lot of action adventure platforming games. Most games in the genre tend to favor one of the two mechanics where a much greater emphasis is placed on it. I didn’t really see this with Monster Bash HD though. The game actually has a pretty even split between the two mechanics. The game relies on quite a bit of platforming as you have to jump between platforms and avoid obstacles. Shooting with the slingshot is also a big component of the game. There are a lot of enemies to shoot as well as other obstacles that have to be shot in order to progress in the level. Sometimes the two mechanics are even needed together as you have to shoot while jumping.

This creates a balanced and pretty fun gameplay experience. The game is not going to be for everyone. It was made in 1993 and it shows in areas. If you don’t really have fond memories of this era of video games or aren’t a fan of 2D platforming action games, it likely won’t be the game for you. Those who have played the original game will likely already know whether they will like the game or not. Those who haven’t played the game can still enjoy it if they like this genre of retro action platformers.

I generally had fun with Monster Bash HD. I personally didn’t enjoy it as much as Secret Agent HD though as that game had a greater emphasis on platforming which is the mechanic that I prefer more than the shooting. The game is still quite fun even though it is almost 30 years old at this point. Good gameplay will remain relevant over time, and this holds true for the game. The controls aren’t always perfect, but they generally work well. The gameplay is quite straightforward as you basically just jump and shoot. It works though because it is satisfying destroying monsters with your slingshot and making difficult jumps. If you generally enjoy these type of games I see no reason why you wouldn’t enjoy Monster Bash HD as well.

As I mentioned at the beginning of this review, I don’t remember ever playing the original Monster Bash so I won’t be able to make the comparisons that someone who played the original game may be able to provide. I did check out a few videos of the levels of the original game. After comparing them to the levels from the remaster, I have to say that the layouts look identical. I can’t say for certain that there haven’t been any changes, but it seems like most of the changes to the game have to deal with a visual upgrade. The visual upgrades are quite nice as the game looks a lot better than the original while also remaining loyal to the style.

Other than the visual upgrades most of the other changes to the game have had to deal with quality of life upgrades. There is also the addition of the level editor and Steam Workshop support. Basically the game gives players the tools to make their own levels and share them with other players. I really haven’t spent any time with this aspect of the game, but I always appreciate when games add a level editor as it allows players to create their own levels. If the game develops a community of creators, the game could end up with quite a bit more content than the original game.

For those who have played some of the other Apogee remasters that have come out recently, I will say that Monster Bash HD is a good example of old school video game difficulty. The game may look like it was designed for children (outside of some pixelated blood here and there), but the game is not a cakewalk. The game is probably considerably easier than it was originally as you no longer have a set number of lives which would lead to a game over if you ran out. Instead you just lose points for each death in the remaster. The game is still far from easy though. You can eventually brute force your way through a level, but you will likely die a number of times before completing a lot of the levels unless you are already familiar with the game. The difficulty you choose determines how many hits you can take, but due to how the game is designed it is hard to avoid taking at least some damage. There are parts of the game where enemies will suddenly spawn or you will have to deal with several enemies at the same time. The game even relies on some pretty precise jumps at times which will lead to damage if you mess up.

I would say most of the damage you receive in the game will be your fault. There are some instances where the game feels a little unfair though. I don’t blame this on the remaster as this is due to the design of the original game. There will be surprise enemies that come out of nowhere which you can’t predict unless you are familiar with the game. There are also a number of cheap deaths/hits that don’t really feel like they are your fault. The game even has a few areas where you could get trapped and have to restart a level from the very beginning. I don’t blame any of this on those responsible for the remaster as these issues are due to the original design of the game. They can become a little frustrating at times though. Game design has come a long way in almost 30 years, and this is evident during parts of the game.

As for Monster Bash HD’s length it kind of depends. The original game had 28 levels and I am assuming the remaster has the same number of levels. Each level is not super large, but they are designed in a way where they can still take a decent amount of time. A lot of this has to deal with the fact that to beat a level you need to find all of the captured pets which can sometimes rely on backtracking to find a pet that you missed. If you are familiar with a level you could probably beat it within a couple minutes. Those unfamiliar with the game will likely take at least 10-15 minutes to complete each level on their first attempt especially if they try to find all of the collectibles. Each level has a number of different things to try and complete from finding collectibles to beating a level’s time. These things encourage you to go back and play levels that you have already beat. With the game only retailing for $10, if you like this type of retro video games I think you will get your money’s worth out of the game.

While new games that revolutionize the video game industry are always appreciated, sometimes it is nice to go back and check out some old games from the past. This is why I really like the recent tradition of remastering old classic video games to make them work on modern computers to try and attract new audiences to the game. I never played Monster Bash when it was first released, but I was still interested in checking it out as I was a pretty big fan of Apogee Softwares’ work in the 1990s. While I wouldn’t say that Monster Bash HD is as good as some of the other games from their catalog, I still enjoyed the game quite a bit. The game does a good job blending action and platforming mechanics into a fun retro gaming experience. Anyone who likes these type of games will likely really enjoy the remaster. The game does a good job staying true to the original game while also adding in some quality of life improvements as well as a level editor. The game can be kind of difficult at times and there are some occasional cheap deaths which may turn off some players though.