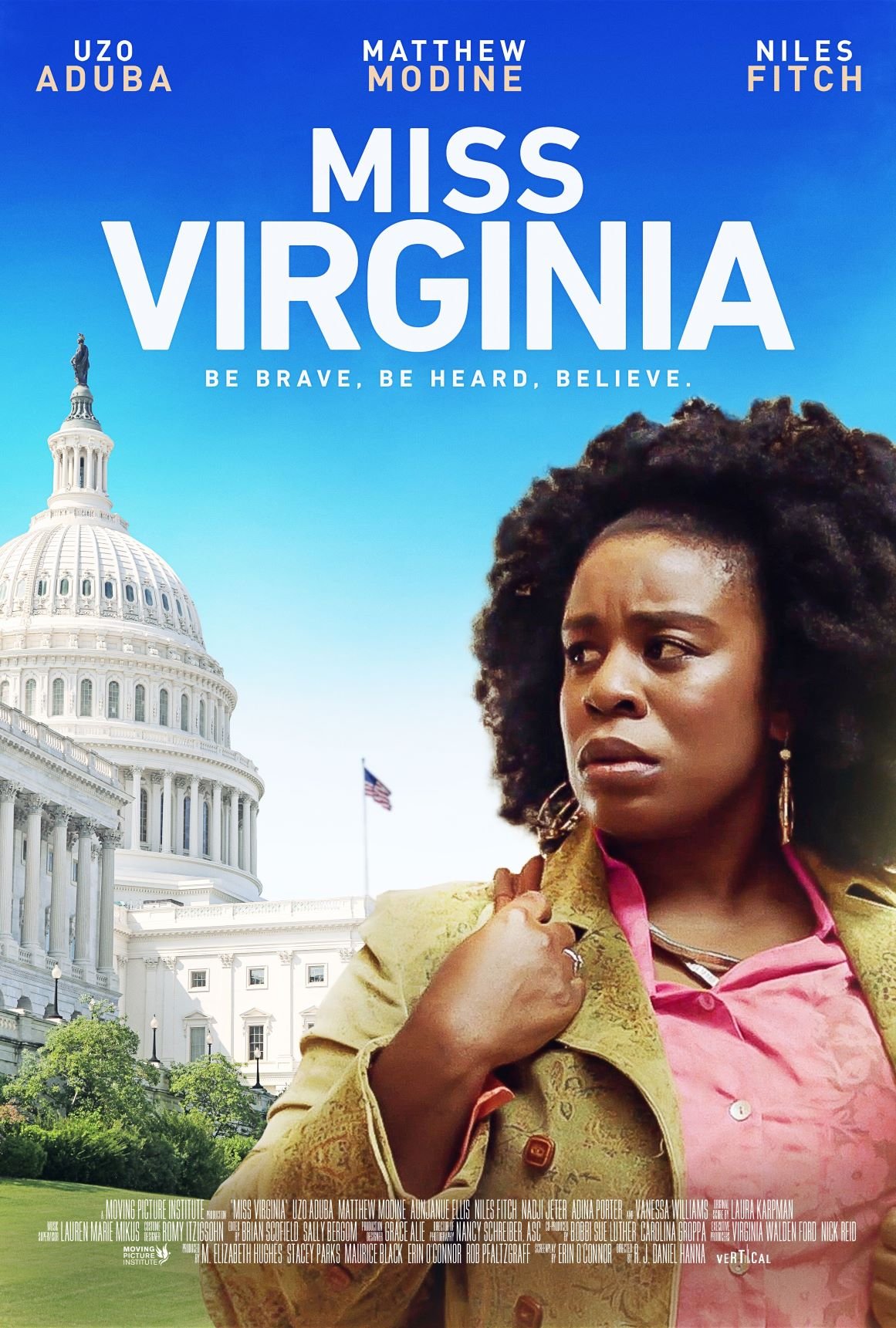 Regular readers of Geeky Hobbies will know that I am a pretty big fan of true story movies. I don’t know exactly what it is about them but I have always enjoyed seeing an inspiring true story about a person that overcame the odds. When I was given the opportunity to view a screener for Miss Viriginia (releasing on October 18th, 2019) I choose to check it out as the premise sounded interesting. Miss Virginia tells the true story of Virginia Walden Ford as she fought to get a better education for her struggling son. Miss Virginia is an inspiring story about a mother fighting to improve her son’s education that by trying to remain apolitical leads to a somewhat misleading story.

Miss Virginia follows the true story of Virginia Walden Ford. In the early 2000s Virginia’s son was struggling in school. Due to her not being a wealthy woman she had to send her son to the nearby public school which was not a good school. The school suffered from poor funding, bad teachers, and violence. This lead to her son losing interest in school and regularly skipped classes. With her son about to go down the wrong path Virginia decides to enroll her son in private school which helps the situation until she can no longer afford to pay the tuition. After finding out that other cities in the country have a scholarship/voucher program to help with private school funding, she tries to get the local politicians to create a similar program in her area. Unfortunately Virginia lives in Washington DC which presents unique obstacles as she has to go to congress in order to get the funding. Will Virginia succeed in getting a better education for her son?

So before I proceed with this review I would like to point out that Geeky Hobbies is not a political website. I bring this up because Miss Virginia deals with school choice and voucher programs which can become pretty political at times as there are strong opinions on both sides of the issue. As this is not a political blog I will try to avoid having my own beliefs on the issues discussed in the movie impact the review and instead focus on the movie itself. What is kind of strange about Miss Virginia is that it tries to be apolitical and succeeds for the most part until you look beneath the surface.

The heart of the film and what I enjoyed most about Miss Virginia is that it is mostly a story about a mother and the lengths she will go to in order to better the life of her son. For the most part the movie doesn’t spend a lot of time talking about the voucher/school choice topic as it is treated as more of a background element to the movie. The movie is more about Virginia trying to provide a better education for her son. I think everyone, from both sides of the political spectrum, can agree that there are ways that our educational system could do a better job teaching our children. Most of the debate is about how we should improve struggling schools throughout the country. Miss Virginia focuses more on the effort to try and improve student’s education rather than the process of how that is done. It is inspiring to see a mother who is fighting to make her son’s life better.

Another thing I liked about Miss Virginia is that while the movie doesn’t really get into the politics behind the story, it is about fighting for what you believe in. I think people from both sides of the political spectrum can agree that you should fight (politically not physically) for what you believe in. I honestly think more people in the United States should pay attention to what is going on in politics and get involved when there is something they strongly believe in. I think Miss Virginia does a good job showing a woman fighting for what she believes in through the political process from gathering signatures on a petition to making speeches and trying to persuade congress to do something to make the country better. I wish more people in the United States would fight for what they believe in.

One of the reasons why the story in Miss Virginia is pretty good is due to the acting being quite good. Uzo Aduba does a really good job in the title role. She brings character to the role portraying a mother that cares deeply about her son that is willing to fight to see him live a better life. Uzo Aduba is the star of the film but I thought the rest of the cast was quite good as well.

For the most part Miss Virginia doesn’t really dive into the politics behind the story as it is trying to avoid being political. Either intentionally or unintentionally though the movie does get kind of political. Being a big fan of true story movies I am well aware that these movies can be a little loose with the facts at times. So after watching every movie from the genre I like to research the topic a little to see how accurate the film was and see what truly happened. In this regard I found Miss Virginia to be kind of lacking. On the whole the movie doesn’t seem to make anything up as the basics of the story are true as to what happened. Several of the characters in the story are fictional though and have been turned into caricatures of who they are meant to represent.

The area where Miss Virginia fails is that it doesn’t tell the whole story. In the process of trying to not be political it kind of does become political due to its omissions. On the whole the movie doesn’t spend a lot of time talking about the policy which I liked. On the negative side though it basically paints the story like Virginia’s side is 100% right and everyone on the other side is corrupt politicians. The movie makes it seem like everyone loved the policy and no one had any real concerns about it so the “corrupt” politicians were the only ones standing in the way of it being passed. In this way the movie kind of makes itself political as it pretends that there was only one real side to the issue. In actuality the policy that Miss Virginia follows is a lot more complicated than the movie makes it seem. The policy has done some good things providing some children with better educational opportunities. The policy has had its own issues though including providing funds to schools that have performed worse than public schools (the whole reason behind the policy in the first place) and some children being left behind due to the policy. The policy did some good but it was not perfect like the movie pretends that it was. While it might not have wanted to be political, by disregarding one side of the argument the movie is being kind of dishonest as it doesn’t tell the whole story.

At the end of the day I have conflicted feelings about Miss Virginia. There are a lot of things that I liked about the movie. The story is mostly about a woman that is fighting to get her son a better education. No matter what your political leanings are I think we can all agree that is a noble cause. The story is kind of inspiring as a mother fights against the system in order to improve the life of her son. I also liked the elements of getting politically active to fight for what you believe in. The story is topped off with some good acting especially from Uzo Aduba. The main problem with the movie though is that it is kind is dishonest to the underlying story that the movie is based on. While the movie tries to remain neutral it kind of chooses a side by what it chooses not to include. Miss Virginia portrays the opposition as all corrupt politicians and doesn’t discuss any of the valid criticism to the policy that the film is based on. I found this to be kind of dishonest to viewers as the issue is more complicated than the movie paints it out to be.

As far as recommendations it kind of depends. If the movie’s concept doesn’t really interest you I don’t think Miss Virginia will be for you. If you like true stories and think the concept sounds interesting though I think you can get some enjoyment out of the movie and should consider checking it out.

Miss Virginia is available on digital/video on demand and select theaters on October 18th, 2019.