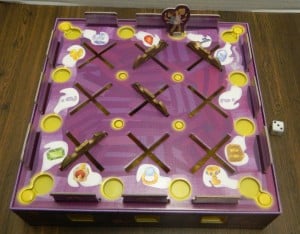 This is an overview of the board. This player rolled a three which took them to the key space. They must try to remember which of the outer windows is the key treasure window and use the mirrors in the middle to “aim” at that window. 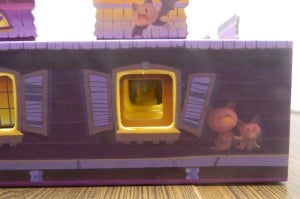 This is obviously very blurry but the image is hard to see in person anyway and nearly impossible to photograph. The player did not find the key that they were looking for and will not receive any jewels.

Since the current player did not find the treasure they were looking for, the two players who voted with the unlit candles receive a jewel each. The middle player guessed incorrectly and receives nothing.

I found it interesting tho I agree. It was hard for my 6 yr old to understand.