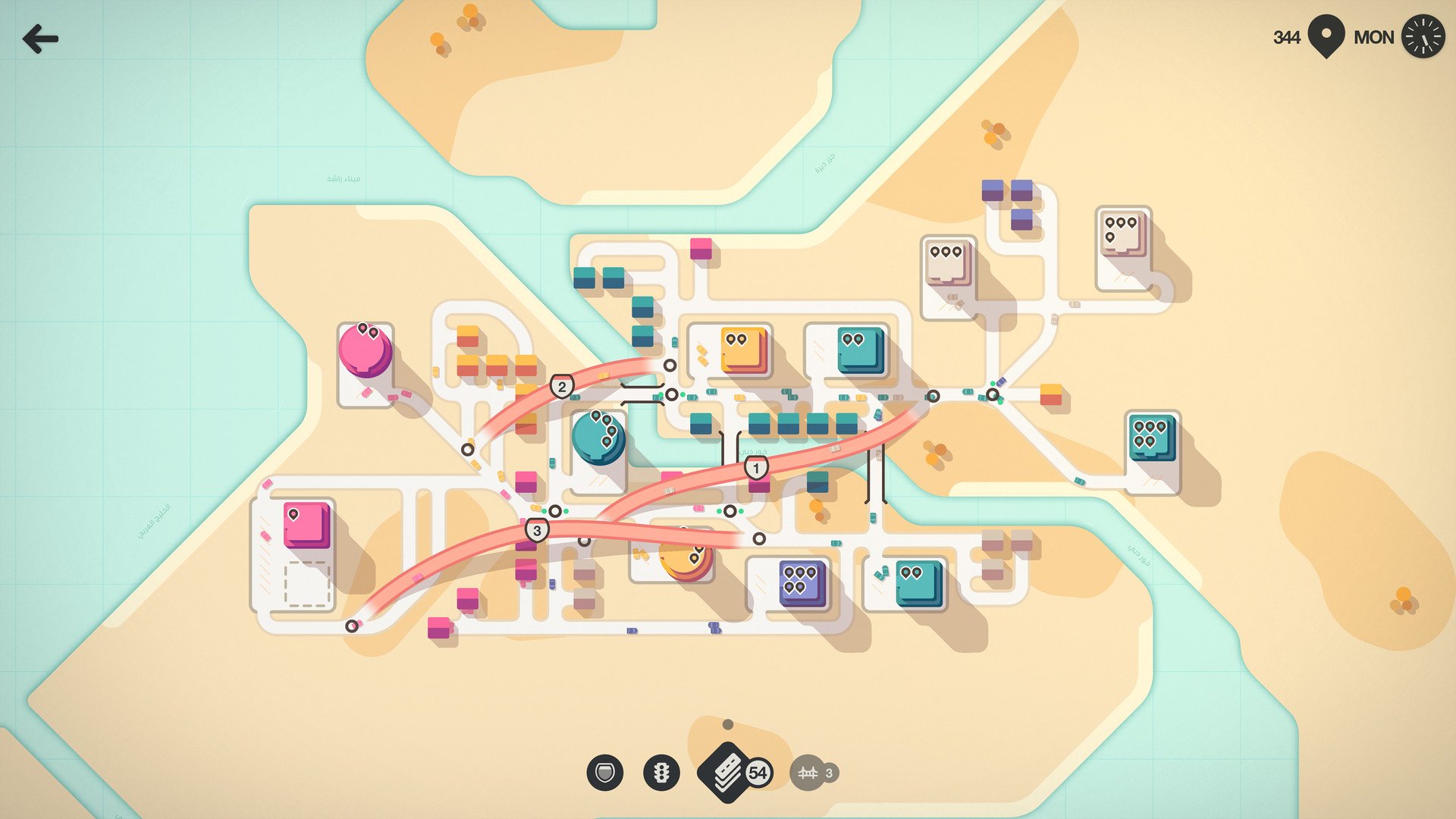 Released back in 2015 Mini Metro was a pretty big hit. The game was basically a simple laid back puzzle game where you were in charge of creating the subway/metro system for a large city. The objective was to get passengers to their destinations quickly in order to prevent any station from becoming overcrowded. Six years later and the sequel, Mini Motorways, has finally arrived for PC players. The game takes the gameplay from the original game and adapts it to creating a road network to get your civilians to their destinations. As I enjoyed Mini Metro I was excited to see what the sequel would do to improve upon the original game. Mini Motorways successfully takes the gameplay established in Mini Metro and improves on it to create an even more satisfying and relaxing puzzle game.

Fans of Mini Metro will see similarities in Mini Motorways but the gameplay has advanced in some ways as well. The objective of Mini Motorways is to get your citizens to their destinations as quickly as possible. There are two types of buildings in the game. Houses supply you with citizens and the larger buildings require people to travel to them regularly. All of the buildings are color coordinated so citizens will move from their house to a larger building of the same color. The objective of the game is to create a road system to get the citizens to their destinations in a timely matter.

How you build your system is a little different than Mini Metro. In Mini Metro you would drag routes to a new station and it would immediately be added to the route. In Mini Motorways you are given a number of road tiles that you can place. To place a road you just click or drag over the ground to place the road. Once you connect the houses/buildings to your road, the people will then drive themselves to their destinations. In addition to new road tiles, you will also acquire one special item to help you each week. You will be presented with two options and you will choose which one you think you need more. These special items include bridges, tunnels, stop lights, roundabouts, and highways. How you use these items is important as they can really help make the traffic flow better.

A few years back I played Mini Metro and enjoyed it quite a bit. I think the main reason that it succeeded was that it found the perfect balance between simplicity and strategy. The gameplay was simple to pick up and play as you just dragged your cursor around the map to create routes between the different locations. There was strategy/skill to the game as well though as you needed to figure out which routes to create in order to run the most efficient transportation network. This combination of simplicity and strategy created a game that was easy to pick up and yet kept your interest as you tried to do better on your next attempt.

Heading into Mini Motorways I was curious how the game would compare to the original. Well I am happy to say that it pretty much improves upon Mini Metro in almost every imaginable way. The game shares a similar feel to the previous game, and yet it feels different at the same time. Basically Mini Motorways feels like a more advanced Mini Metro. The basic objective is very similar as you are transporting passengers to their destinations. It just felt like there was a lot more to the process in Mini Motorways though. This comes from the fact that you have a lot more control over the design of the network. You have to place each road piece yourself instead of the game creating it for you when you connect two stations.

There is just something really satisfying about creating a road network to get the passengers to their destinations. Placing the roads is really straightforward and the early parts of each map are pretty easy as you are given plenty of time and road pieces to create the routes that you need. As time progresses though, things become more complicated. More buildings and houses get added along with more colors. This forces you to create a much more interconnected network of roads. This will eventually create traffic jams which will likely lead to your demise. Therefore as you are creating your initial layout you need to start planning out how you will deal with expansion and the traffic jams which will eventually come up. There is a lot of planning and strategy that goes into creating a network that allows for smooth flowing traffic.

The key to this is the special items. You can survive the early stages of each level without really taking advantage of these items, but towards the mid to late game your use of them will be critical to your success. Simple roads are not enough to handle all of the traffic that you will eventually have to deal with. Bridges and tunnels allow you to create paths over water and through mountains which can give you a much shorter route between two locations. Stoplights can help traffic move faster in congested areas. Probably the two most important special items though are the highways and roundabouts. In high traffic intersections you will want to place a roundabout as it makes traffic move much quicker. The catch with roundabouts is that they take up more space so you need to plan ahead for where you want to place them so buildings don’t spawn in the areas where you eventually want to place them. Highways are great tools to get cars to and from locations quickly. This can help you create a direct path between a residential area and a destination or it can be used to create a quick path for cars across the map. To do well in the game you need to choose the right special items as well as choosing the optimal way of using them.

While I would say that Mini Motorways is a little more complicated than Mini Metro, the game still succeeds at being quite accessible. The game takes maybe a couple minutes to learn as the basic objective is just as simple as the original game. While you have more things to deal with, the game still maintains the laid back feeling of the original game. The game allows you to pause at any time to analyze what you should do next or fast forward when you are at a point where you are just waiting for time to pass and new buildings to pop up. The atmosphere shares a very similar style to the original game which fans should like. The graphical style is minimalist, but it really works to create the game’s overall laid back feel. The game’s soundtrack fits the mood great as well. Basically anyone who liked the laid back feeling of Mini Metro should love the same feeling that you will get from Mini Motorways.

A game like Mini Motorways works because each game is different. The overall maps don’t change but everything else is randomized. The buildings that spawn and where they spawn is random. The special items you get to choose at the end of each week is randomized as well. This randomization keeps the game fresh as every game will present you with different challenges. If the game wasn’t randomized it would become dull kind of quickly as you could use the exact same layout every single game.

The randomization is one of the game’s greatest strengths as it gives the game a lot of replayability. At the same time though, it does lead to the biggest issue that I had with the game. As things are randomized, your success will somewhat depend on luck. Good players should last quite a while no matter what as they can figure out how to adapt their layout to work with what they are given. If you want a really long run though you need to hope that luck is somewhat on your side. A lot of this comes from where the houses/buildings spawn. They could spawn in a way where it is really easy to make an efficient transportation system. Other times they may spawn in a way that makes your job considerably more difficult. On top of this the special items that you get to choose from could be exactly what you need or things that you really don’t have a use for.

If you are good at the game, you should still be able to last a while based on your skill/strategy. Sometimes it just feels like luck plays too big of a role in how well you do though. This is especially true when you are going for a high score or some of the harder achievements. The game is designed that you will eventually lose (or the game would go on forever), but some of your runs seem to end too quickly where it doesn’t always feel like it is all your fault. For example in one of my games I ended up losing because the game didn’t seem to spawn enough houses of one of the colors. My transportation network was running well where there weren’t really any logjams. It just felt like the number of houses that spawned didn’t provide enough people to fulfill the need required by the buildings of the same color. I really don’t see what I could have done to fix this situation. It kind of sucked when I lost that game and it didn’t feel like it was all my fault.

As for Mini Motorways length, like the original game it really depends on what you want to get out of the game. The game is one where it relies on players trying to seek higher scores by playing the same levels over again in order to try and improve upon their previous design. The game has a total of eleven different cities to play. The main difference between the cities is the overall layout of the map and the obstacles that you will have to overcome. The length of each run depends on how good you are. It could take just minutes to 20+ minutes if you create a good network. On top of playing the levels to increase your high score, the game also has a weekly and daily challenge to compete in against other players from around the world. If you are the type of player that will only play each map once before moving on, you might be a little disappointed by the length. Those that like to try and increase their high score though will likely get plenty of time out of the game to make it worth their time and money.

With it being six years since Mini Metro was released PC fans have been waiting for a new game in the series for quite a while. The good news is that the wait was worth it as in my opinion Mini Motorways is better than the original in pretty much every way. The game takes the laid back puzzle gameplay of the original and turns it up a notch to create a game that is even more addicting. Mini Motorways in a lot of ways feels like an advanced Mini Metro. The game gives players more control over the design of their transportation network which leads to more strategy and enjoyable gameplay. It still maintains the laid back approach of the previous game though. Honestly the only real issue I had with the game is that due to the randomization the game can sometimes rely on luck where your game ends because luck was not on your side. This can be frustrating at times, but doesn’t detract too much from a game that otherwise is really enjoyable.