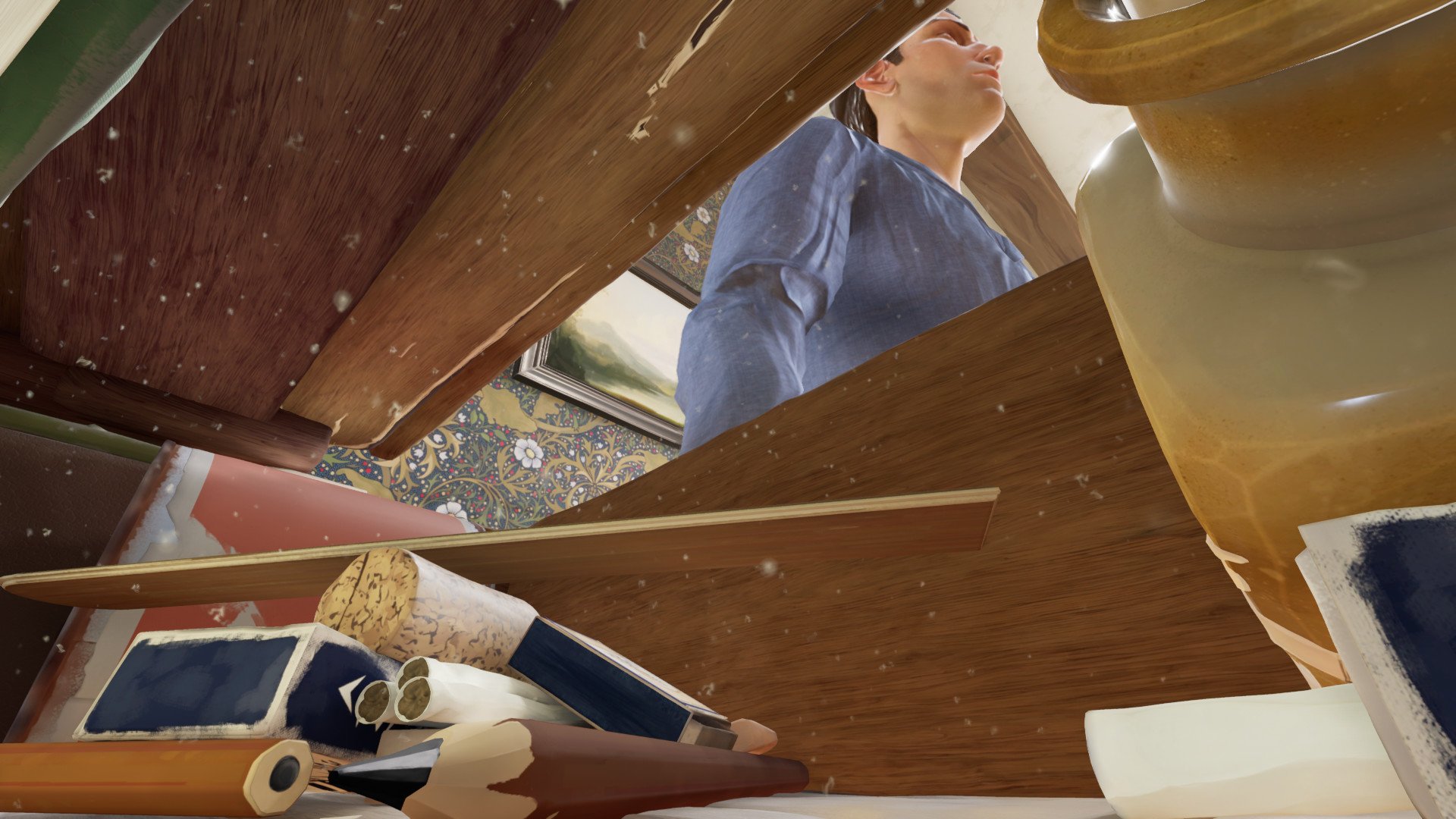 Many people complain that the video game industry isn’t the most innovative. Most of the biggest games released each year share a similar concept where they tend to blend together. Thanks to the indie scene though you sometimes find games that take inspiration from unexpected sources. That is definitely the case when it comes to the game that I am looking at today Metamorphosis. I didn’t know this initially but the game is actually inspired by the 1915 Franz Kafka story The Metamorphosis. I have seen video games take inspiration from many different sources, but rarely do you see a game based around a 100+ year old novel. While interesting this wasn’t want initially intrigued me about Metamorphosis. I was actually more intrigued by the fact that the game was about playing as a small insect traversing a bug society hidden under humanity’s noses. Metamorphosis embraces its playing as a bug premise to create a truly original video game experience.

Based on the 1915 Franz Kafka story of the same name, Metamorphosis tells the tale of Gregor Samsa. After a night of partying/drinking you wake up at your friend Joseph’s house. You quickly realize that things aren’t right as you are for some reason being transformed into a tiny bug. In your new form no one recognizes or even notices you forcing you to use your new bug body to traverse your friend’s apartment as you try to figure out what happened to you. If this wasn’t enough your friend Joseph is suddenly arrested for unknown reasons. In order to find out answers for both of your predicaments you must explore a hidden bug society. Will you be able to find your answers in time to regain your human form and save Joseph?

I got to say that I have played a lot of video games and yet I can’t recall ever playing one quite like Metamorphosis. Basically the gameplay revolves around you being turned into a bug. As you are a bug with no ability to fly movement has become considerably more difficult. Objects that were once normal size are now huge obstacles to overcome. This is where much of the gameplay comes from. If I were to classify the game I would probably say that it is a combination of a puzzle game and a platformer. The basic premise behind the gameplay is to get from point A to B. This is accomplished in two ways.

I would say that a majority of Metamorphosis’ gameplay revolves around the platforming mechanic. Your small size makes getting over even small objects difficult. You have a couple tools to help you with this though. As a bug you will mostly be skittering along surfaces. You can walk up pretty steep cliffs without any assistance. If you need to get up even steeper surfaces though you can dip your feet into sticky substances which allows you to walk up vertical surfaces with your only restriction being that you can’t walk completely upside down. The game also gives you a jump which is surprisingly high for your small stature. These elements lead to a gameplay experience that feels a lot like parkour except that you are jumping between everyday objects.

Most of the time you can proceed just by using these platforming mechanics. There will be times where your jumping and climbing skills won’t be enough though. Here is where the puzzle solving mechanics come into play. Puzzles come in two varieties. Throughout the game you will encounter times where you have to reach a higher location that you can’t make with just your jump or climb. To reach these locations you need to find objects that you can manipulate to create a path for yourself. In some cases there is only one option, but in others there are multiple ways to accomplish your objective. The other type of puzzle mostly has you interacting with various switches and objects to perform a certain action to open up the path forward.

When I first saw Metamorphosis the thing that intrigued me the most was the idea that you play the entire game as a bug. I personally have no real interest in bugs, but the idea of playing as a tiny character in a world much larger than yourself intrigued me. There have been a number of games that have utilized this bug premise in the past. Some have done a pretty good job making you feel like a bug while others have kind of struggled. The good news is that Metamorphosis might be the best game that I have ever played that has utilized this type of mechanic.

What makes Metamorphosis really shine is that most of the time you truly feel like you are playing as a bug. The game does a fantastic job utilizing scale to its advantage. For much of the game you will feel tiny as everyday objects tower over you. This creates a feeling that you character is insignificant in this larger world. Something as simple as climbing on top of a book requires climbing or jumping from another object. One of your first challenges in the game will be to climb up a desk to reach one of the shelves at the top. This doesn’t sound all that difficult at first, but it is actually a challenge due to your size. To ultimately reach your destination you will need to climb pieces of paper and books. You will also have to tip over picture frames to create ramps, ride swiveling lamps, and manipulate many other objects as you make an impromptu path to the top of the shelves.

The impressive use of scale alone wouldn’t have been enough to make the game enjoyable. The good news is that the mechanics are fun as well. There is nothing particularly original about the jumping mechanics, but by being reduced to such a small scale it makes them stand out. The climbing is quite satisfying as well. Climbing up vertical walls is satisfying and really opens up opportunities for how you can make forward progress. I might be mistaken but in many situations there are multiple different paths to get to your ultimate destination. This gives you a sort of freedom. It might not seem all that impressive to climb something such as a shelf, but in action it is really satisfying.

While I really liked Metamorphosis’ gameplay I will say that the game is on the easier side. I honestly wouldn’t say that the platforming or the puzzles are particularly difficult. The platforming requires some thinking as you figure out where you can jump and climb. None of the jumping is particularly difficult though if you have any familiarity with platformers. I attribute this partially to the fact that your jump is quite a bit higher than you would think and the collision detection is pretty forgiving. There is also no fall damage as the only way to die is to fall off the map/down a pit or be crushed by an object. The puzzles mostly come down to exploration and figuring out what you can interact with. Once you know this the puzzles themselves aren’t too difficult.

Before I talk about the actual story I want to address the game’s inspiration. As I mentioned earlier the game is based around the Franz Kafka story The Metamorphosis. I have never read the story but based on a little research I would say that the game was more inspired by the story rather than being a simple retelling of it. The overall premise is exactly the same as Gregor Samsa is suddenly turned into a bug in both stories. This is where a lot of the similarities end as the rest of the story seems considerably different. Based on the synopsis that I read this makes sense as I don’t know how much the original story would have worked for a video game. Instead the game seems to take inspiration from another Kafka story The Trial to fill in some of the gaps. The designers also added in their own twists which included most of the bug society elements that you traverse throughout the game.

Despite being based on a mish mash of different stories, I thought Metamorphosis’ story and atmosphere was pretty good for the most part. As I mentioned earlier the game does a really good job of creating a world that you want to explore. The game does a great job creating the bug society utilizing everyday objects in unique ways. The graphical quality might not compare to a AAA game, but the game does a fantastic job creating interesting locales that you want to explore. The game has created a whole bug society that has an interesting backstory. This is all background to the main story of Gregor and Joseph. I thought the game did a good job intertwining these two stories as they both share more in common than you would initially expect. Joseph’s story in particular is cleverly told as you will pop in and out of his story as you view his life from afar. Generally if the game’s premise intrigues you at all you should really enjoy Metamorphosis’ story and atmosphere.

As for the game’s length it is somewhat going to depend on how you approach the game. I personally am the type of player that likes to fully explore a location if possible. The world is quite large with a lot of nooks and crannies to explore. Some of the game’s puzzles have multiple solutions and there are other things that you will find in your journey that are mostly tied to achievements. If you pursue these things you likely will get more out of the game than if you just did the bare minimum. I would guess that most people who like to explore could probably get around 5-7 hours out of the game. Those that are just interested in the main storyline though will likely be able to shave off a couple hours. As for replay value it depends on whether you are interested in all of the achievements. Getting all of the achievements will add to your time. Otherwise the gameplay is kind of linear where your second time through the game isn’t going to be much different than your first. While I enjoyed playing the game I don’t see playing the game again for a while until I at least forget the puzzles and the story if possible.

Heading into Metamorphosis I was intrigued by the game’s premise as it had the potential to be a truly original experience. I was actually impressed as the game lived up to my expectations. On the surface the game feels like a combination of a platformer and a puzzle game as it shares a lot in common with both genres. What truly differentiates the game though is the fact that you are playing the game as a bug. The game really excels at using this premise by playing with the game’s scale. A seemingly easy task of reaching the top of a shelf is a challenge requiring a lot of platforming and utilizing the environment to your advantage. The game truly nails the experience of playing as a bug. This is supported by a interesting story and compelling world that you want to explore. I really only have two complaints with the game. First it is kind of easy as the puzzles are pretty straightforward and the platforming is pretty forgiving. Otherwise the game is not the longest at around 4-7 hours and there isn’t a lot of replay value.

My recommendation solely comes down to your thoughts on the premise. If the idea of playing a puzzle platformer as a bug doesn’t intrigue you, Metamorphosis probably won’t change your mind. Those that are at all intrigued by the premise though should really enjoy Metamorphosis and should consider picking it up.