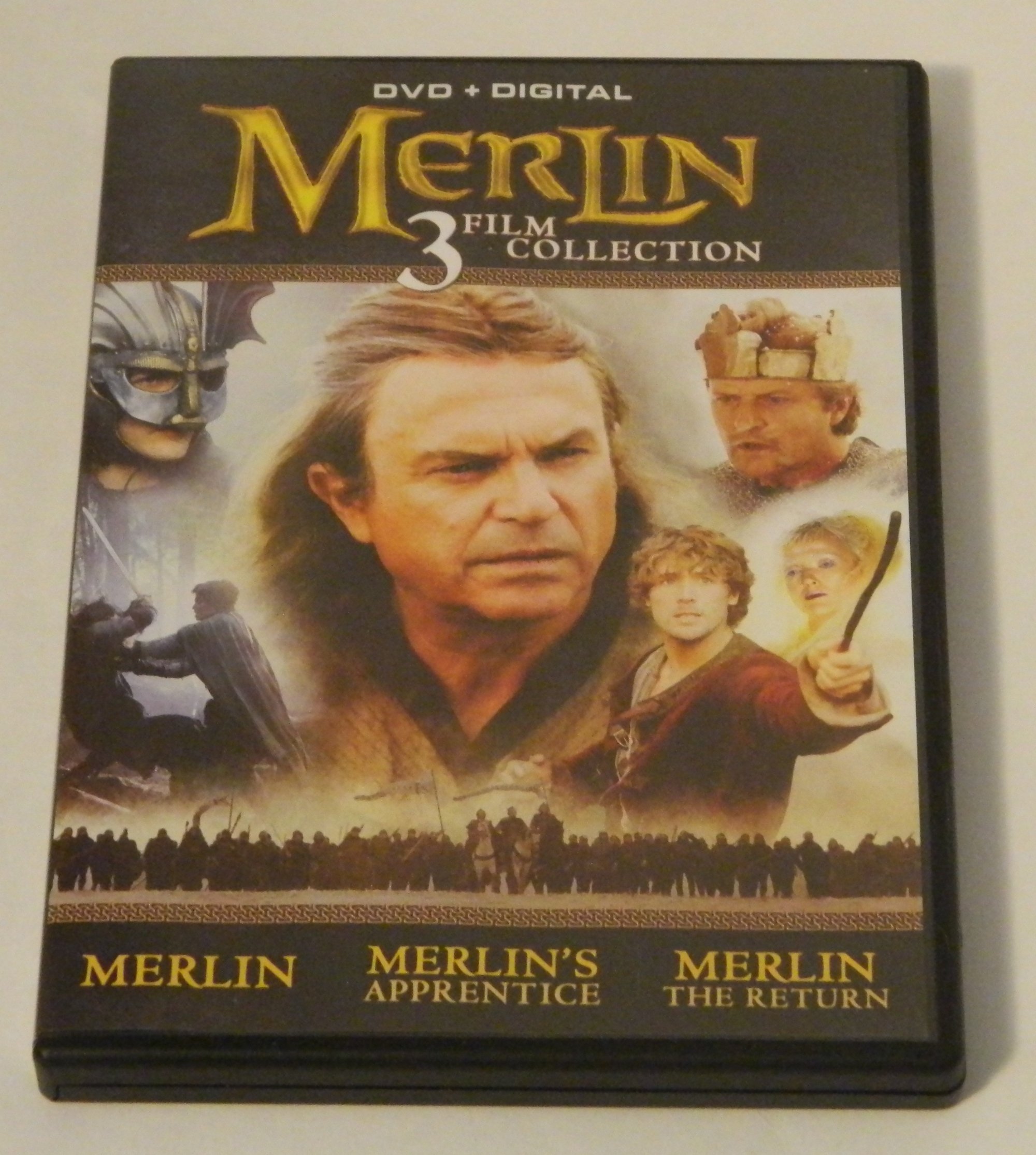 The tales of King Arthur, Camelot, and the Holy Grail have been quite popular for a long time. Most of the movies and stories surrounding this storyline mostly focus on King Arthur with Merlin mostly serving as a sidekick. Today I am looking at the Merlin 3 Film Collection recently released by Mill Creek Entertainment which features three films that place most of the focus on Merlin. The collection includes 1998 TV miniseries Merlin, the 2006 TV miniseries Merlin’s Apprentice (sequel to Merlin), and the 2000 British film Merlin: The Return. As the three films are quite different I am going to address the three films separately.

Back in 1998 NBC aired a television miniseries called Merlin. The mini series starred Sam Neill in the title role of Merlin. The Merlin miniseries tells the story of King Arthur and the rise and fall of Camelot from the point of view of Merlin. The story follows Merlin’s quest to find a rightful leader to rule over England and bring prosperity to the land. Standing in his way is his mother Queen Mab who wants the people of England to return to the “Old Ways” so her power will grow. Can Merlin succeed at bringing peace to the world and stop Queen Mab once and for all?

While I had never heard of the Merlin TV miniseries, I was actually intrigued to check it out for a couple reasons. First the miniseries has pretty high ratings. Second Merlin was nominated for quite a few awards despite not winning any. Finally I generally enjoy fantasy films. In a lot of ways I liked Merlin but it does have some problems.

What I liked most about Merlin is that it has an interesting take on the King Arthur/Camelot story. As the film basically starts at Merlin’s birth, the film goes through ages before King Arthur ever shows up. This allows the movie to tell stories outside of the traditional King Arthur storylines. While some of these stories are better than others, it is refreshing that the movie tried to do something new instead of being another retelling of the same old King Arthur story. In general I would say that the miniseries takes a more serious tone with the subject material and I think it serves the miniseries well. While there are a few hiccups from time to time, I generally enjoyed the story and was interested in seeing how it would end.

Another positive for Merlin is that I actually think the acting was pretty good. For a miniseries from 1998 I was actually surprised by how many of the actors that I was actually familiar with. Sam Neill is not surprisingly the star of the miniseries and does a good job as Merlin. Merlin also includes Helena Bonham Carter, Martin Short, James Earl Jones and Lena Headey among others. While some of the acting is a little hit and miss, for a TV miniseries I have to say that I was a little surprised.

I was a little more neutral in my thoughts of the video quality. As it was filmed as a TV movie from 1998 it is not surprising that the film was shot in a fullscreen format. I wish the film was widescreen as the black bars on both sides of the screen are kind of annoying. As far as the practical effects are concerned the film deserves credit as it looks quite good for a TV miniseries. I also give Merlin some credit for the special effects since they were probably pretty impressive for a TV miniseries for its time period. They look pretty outdated based on today’s standards though which is to be expected from a 20 year old TV miniseries.

The biggest problem that I had with Merlin is that the film is too long. As it was a TV miniseries that aired over two days, the film is 183 minutes long. You can tell at times that some storylines were drawn out or added in just to make the film longer. While I can see why it was made to be three hours long for television purposes, I think the film would have benefited if it was shorter. It just tends to drag a little from time to time as you can tell some things were added solely for filler. I think Merlin would have benefited significantly if it was cut to around two and a half hours.

Overall Merlin is a solid to good TV miniseries about Merlin, King Arthur and the rise and fall of Camelot. I enjoyed the film and thought it was worth watching. People who like fantasy stories and like the idea of a story told from the point of Merlin should enjoy the miniseries Merlin.

Eight years after the original Merlin aired on NBC, its sequel Merlin’s Apprentice aired in 2006. Satisfied with how successful Camelot has become, Merlin decides to rest to rejuvenate his powers. While he only plans to rest for a few months he ends up resting for over 50 years. Merlin awakes to find Camelot has fallen on hard times. The Holy Grail has gone missing and Camelot is threatened by outside forces. In order to find the Holy Grail Merlin must take on Jack, a local thief with magical powers, as his apprentice. Can Merlin and Jack find the Holy Grail in time to save Camelot before it is destroyed for good?

The story in Merlin’s Apprentice is just not as good as the original Merlin. Merlin’s Apprentice tells a more focused story on the quest to find the Holy Grail. This story is decent but it kind of feels like your typical fantasy story. It doesn’t really offer much that you couldn’t find in other fantasy stories. I think the biggest problem with the story is that the characters aren’t as interesting as the characters from Merlin. While Sam Neill returns as Merlin, Merlin ends up playing a secondary role in the movie to Jack. Jack is a decent character but I would have preferred more emphasis on Merlin. The biggest problem with the characters is that there are too many of them and I could care less what happened to some of them.

Merlin: The Return has nothing to do with Merlin or Merlin’s Apprentice outside of focusing on the character of Merlin. 1500 years ago Merlin successfully stopped Mordred and his mother Morgana from ending the world by trapping them in another world/dimension. A present day scientist stumbles upon a gateway between our world and the other world and agrees to help Mordred and Morgana return to this world. As the barrier between the two worlds weaken; King Arthur, Lancelot, and their men awaken from a long sleep that Merlin put them under. Merlin, King Arthur and Lancelot must work together in order to prevent Mordred and Morgana from escaping their world and threatening ours.

Unlike the other two films in the collection, I had basically no expectations for Merlin: The Return. The movie has pretty terrible ratings from most viewers. The movie’s premise of bringing Merlin and King Arthur to present day was also a really strange concept. I was hoping that it would lead to some funny moments but I felt it was just going to end up being a mess. I ultimately decided to give the movie a chance because I thought it might be so silly that it would be enjoyable.

At first I have to admit that I was actually quite surprised by Merlin: The Return. With such a silly premise the movie takes little time to show that it is not taking the King Arthur/Merlin story seriously. I don’t know if the movie was meant as a comedy but the beginning of the movie feels like it should have been one. The movie really reminded me of 1980s/1990s comedies even including the random children that are needed to save the day. The first fifteen or so minutes are really cheesy which are wrapped up with King Arthur and his men “attacking” a semi with their swords. At this point I actually thought Merlin: The Return could have been a pretty good movie if it kept being cheesy. The beginning of the movie felt like it had all of the makings of one of those movies that are so bad that they are actually good. The acting is pretty bad, the swordplay is laughably bad, and the movie is just silly. I was hoping that the film would end up like something that Mystery Science Theater 3000 would make fun of.

While you can get some laughs out of making fun of the movie, unfortunately it doesn’t last throughout the movie. You can have some laughs at the movie’s expense throughout the film but after the “semi battle”, things go downhill pretty quickly. Merlin: The Return is just a boring film. The plot makes little sense, the acting is bad, the special effects are terrible, and the film is just kind of a mess. You can tell the film didn’t have a large budget as you can see where corners were cut. This is the recipe for a film that is funny to mock but even that doesn’t work as well as you would like in Merlin: The Return. There are occasionally laughs to be had but for most of the film you are left bored.

Unless you like making fun of bad movies or for some reason have to see every Merlin/King Arthur movie ever made, I think you are best off avoiding Merlin: The Return. If you have a group of family/friends who like to make fun of films though, you can have some occasional laughs at Merlin: The Return.

Now that I have looked at each of the three films I want to quickly talk about the set as a whole. The film collection splits each film onto its own DVD so there is no compression issues in order to get all of the films onto the same disc. For the most part the video quality is not great but is probably the best you could expect from two TV movies and a low budget British film. I was a little disappointed that there were no special features in the set though. It is not that surprising though as no special features were probably created when the films were made and the films are not popular enough to go back and make special features after the fact. Overall it is not that big of issue but it would have been a nice addition.

In general I would say that the Merlin 3 Film Collection is a solid group of fantasy films focused on Merlin. The original Merlin is an above average/good TV miniseries that has an interesting take on the King Arthur storyline even though it is a little long. Merlin’s Apprentice is a decent sequel to Merlin even though it is worse than the original. At times Merlin: The Return is one of those films that you can have fun laughing at but for the most part is just a boring film. If you like fantasy films and are interested in Merlin in particular, it might be worth checking out the Merlin 3 Film Collection.

If you would like to purchase the Merlin 3 Film Collection you can find it online: Amazon

Once Upon… A Fantasy Film Collection – 10 Enchanted Films DVD Review