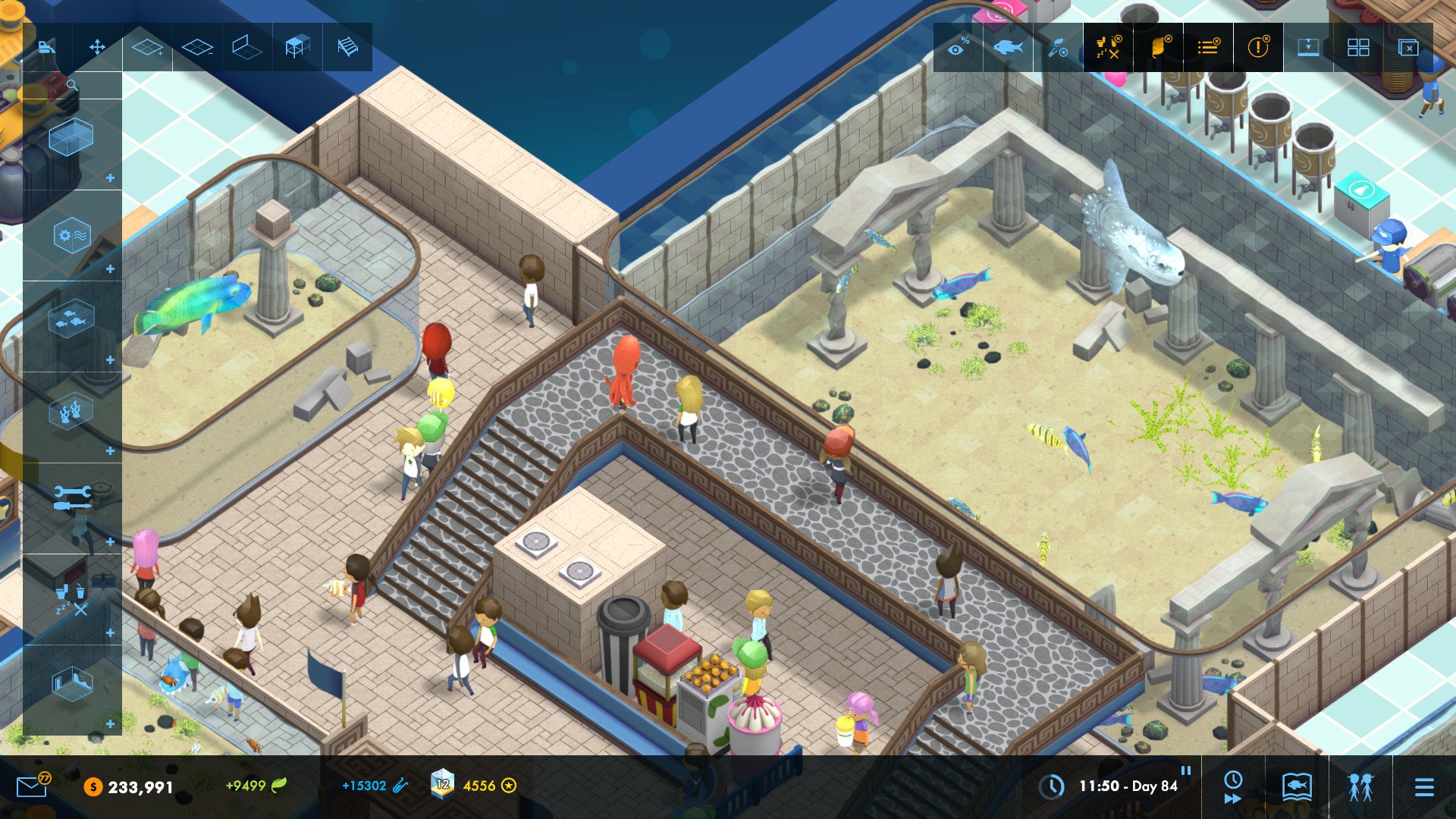 Around three years ago I took a look at Megaquarium. As a big fan of tycoon games I like checking out almost every game released for the genre. I personally didn’t have a ton of interest in running my own aquarium, but I actually really enjoyed the game. It capitalized on everything I like about the genre while creating its own unique take on the genre as well. Today I am looking at the second expansion released for the game Architect’s Collection. Architect’s Collection places a big emphasis on the visual design of your aquarium. Megaquarium: Architect’s Collection will appeal more to those who like to put a lot of work into the visual design of their aquarium, but it is still a worthy addition to an already fun aquarium tycoon game.

For those who have never played Megaquarium before, I want to give a brief overview of the game. In Megaquarium you are tasked with running your very own aquarium. You need to run a financially successful aquarium to keep it open and allow you to expand. Money is not all that matters though as you need to research new technologies and acquire the ability to add more types of fish to your aquarium. You also need to create an entertaining and educational experience for your guests.

As I mentioned earlier the second expansion, Megaquarium: Architect’s Collection, has a big emphasis on the visual design of your aquarium. The game doesn’t really add any new gameplay mechanics to the base game like the first expansion Freshwater Frenzy did. Most of the changes to the gameplay (some coming from a free update that launched with the DLC) are just quality of life upgrades to make things such as visitor pathing easier to control. This allows you to shape your visitors’ experience more. There have also been some tweaks to further micromanage what tasks your staff work on.

Much of the additions to the DLC allow you to further customize the look of your aquarium outside of the fish tanks. With this update the game rewards you considerably more for the overall experience rather than just the fish tanks. Decorations, paints, etc that you place outside of tanks can now earn you prestige. Because of this the DLC gives you several new ways of customizing your visitors’ experience.

Some of the new additions from the DLC are as follows:

These additions can only be utilized in the sandbox mode of the game.

I will admit that I am kind of design challenged when it comes to tycoon games. I don’t really have a sense of style and when I create aquariums/parks/etc, they are generally designed in a more practical than visually appealing way. If people were to look at my designs they likely would think they look pretty ugly. I bring this up because Megaquarium: Architect’s Collection was not really designed for how I typically play games from the tycoon genre.

Despite this I still think the DLC is pretty good. While I couldn’t take advantage of some of these new features to design an even better looking aquarium, it is hard to deny that in the right hands they could add a lot to the game. The DLC does a really good job of giving you more ways of customizing things where it actually feels like you are designing a real aquarium rather than just a bunch of fish tanks placed next to one another. Those that are much better at actually designing things visually, should be able to make some truly impressive new aquariums with the tools added in this DLC pack.

Other than the new design elements, the other big addition in the DLC is a number of new marine species that you can add to your aquariums. The game features 15 new animal types including the Japanese Spider Crab, Ocean Sunfish, Decorator Crab, and Mantis Shrimp.

These new species don’t really add any new drastically different requirements to the game, but they generally have more requirements than most species. Thus these species are generally more complex to take care of. They have their own rewards though as they generally provide more benefit than other species. I appreciate the new species as they give you additional ways to customize your aquarium and expand it further.

While I think Megaquarium: Architect’s Collection adds quite a bit to the game from a design perspective, I was a little disappointed by the fact that the DLC doesn’t add any new missions to the game. I am generally a bigger fan of the missions in tycoon games than the sandbox modes, so a few more missions would have been appreciated. Because of this your enjoyment of the DLC will depend quite a bit on whether you are the type of player that likes to put work into the visual design of your aquarium. If you are the type of player that cares more about creating a well run aquarium and completing missions/objectives than the visual look/design, I am not sure if the expansion offers enough to make it worth it to you.

As a fan of the base game, I will say that I thought the DLC was pretty good. I was a little disappointed that it didn’t include additional missions or some new gameplay mechanics outside of some minor tweaks. If this is what you were looking for you may be a little disappointed by Megaquarium: Architect’s Collection. The DLC is mostly focused on giving players more ways of customizing the visual look of their aquarium. In the hands of someone who likes to put time and thought into the visual design of their aquarium, these additions will allow you to make aquariums that look much nicer. The game also adds fifteen new species of marine animals which allow you to expand your aquarium.