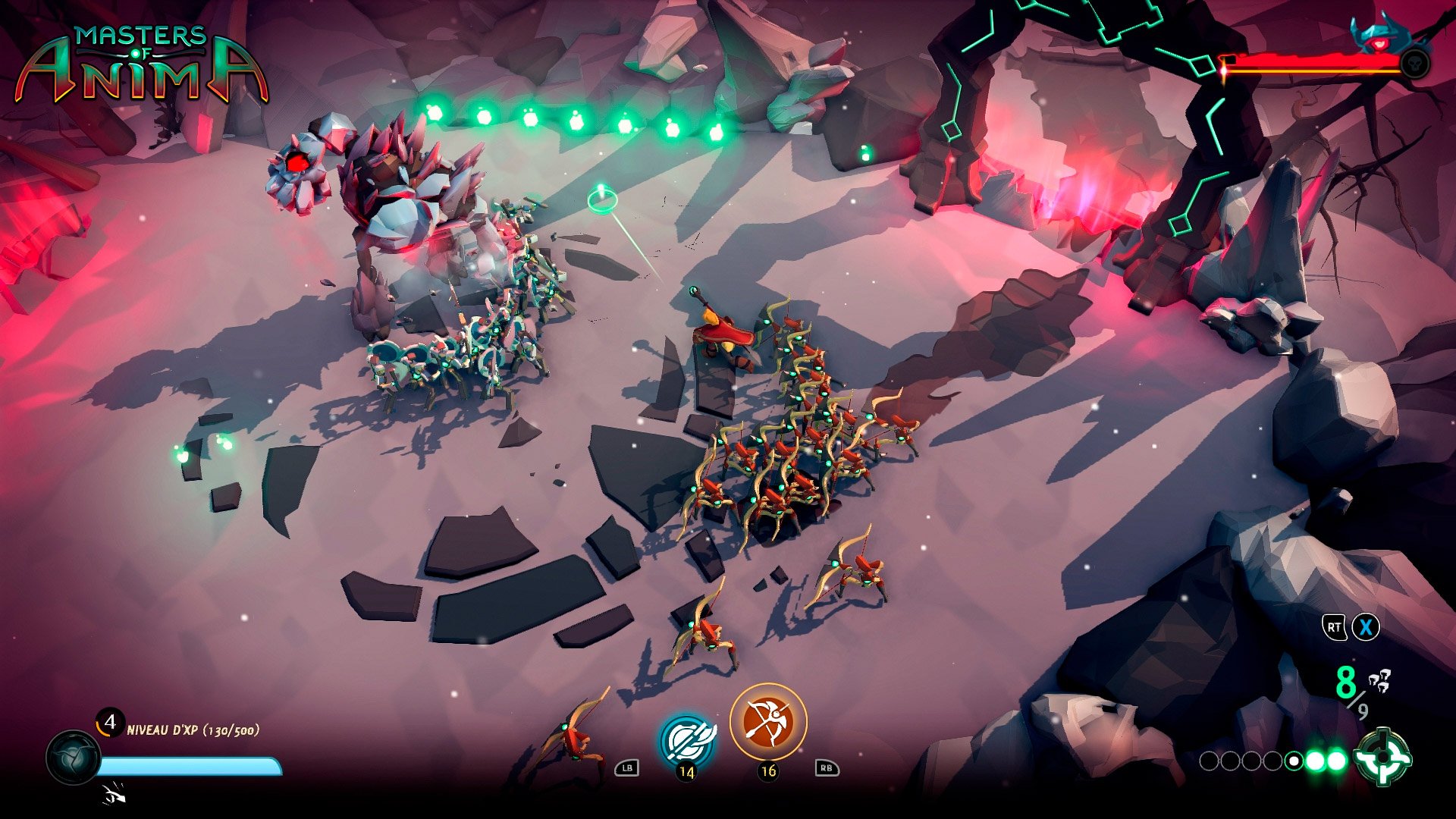 The RTS genre has always been one of my favorite video game genres. When I was a kid two of my favorite games were StarCraft and Warcraft. While a lot of people who enjoy RTS games are fans of the combat, I have to say that I have always been more of a fan of building bases and assembling the army rather than commanding the troops. This is why I was surprised when I first played Pikmin as I really enjoyed the game even though it focused mostly focused on the combat. Despite having quite a few fans, the Pikmin genre is one of those genres that you don’t see a lot of games made for. That is why I was excited when I saw Masters of Anima as it looked like the indie Pikmin game that I had been searching for.

In Masters of Anima you control Otto. Otto is an apprentice of Anima. His people have learned how to turn Anima into guardians that are used to fight the forces of evil. On the day of your apprentice trials your fiance Ana is kidnapped by Zahr. On your journey to become a master of Anima you must stop Zahr to rescue ANA and save the world.

At it’s core Masters of Anima shares a lot in common with Pikmin. As Otto your main goal is to manage and control your army of guardians as they help you defeat enemies and complete other objectives. Creating your army is considerably more straightforward in Masters of Anima than Pikmin as instead of acquiring items which you use to create your army, you can build and change your army at any time. Throughout your journey you will acquire Anima. With the press of a couple buttons you can turn the Anima into the guardian of your choice. You can choose between any of the guardians that you have unlocked and the only limit is that you can only control a certain number of guardians at a time. This limit requires you to change up the distribution of your guardians to fit the current situation.

For an RTS game whose recommended control setup is using a controller, I have to say that I was actually quite impressed with how well the controls work in Masters of Anima. RTS games have always had trouble working well with controllers but I think the developers of Masters of Anima did a really good job of making it work. Basically every action in the game requires using only one or two buttons. The game sorts the units by type. To give orders to a type of unit you first select your chosen unit type. You can either select all of your units of a given type or you can select a subsection of units. The selected units will follow you and then you can either send them to a location or you can lock onto an enemy/object and send your guardians towards it. Pressing the action button will send one unit at a time while holding the button will send all of the units of the current type.

I would say the most important mechanic in Masters of Anima is the combat. At least half of your time in the game will be spent in combat. While you can attack with Otto, most of your time in combat will be used micromanaging your troops. Basically you have to manage your troop levels while also deciding how you are going to deploy them. You have to always be aware of the battlefield as the enemies in the game have special abilities that target specific parts of the battlefield. These attacks are powerful so you don’t want to leave your units in the areas that are being attacked. This means that you are going to have to regularly move your units to prevent them from being wiped out. You might occasionally have time to attack yourself but you are going to spend most of the battles repositioning troops to keep them safe.

For the most part I liked the micromanagement aspect of combat. You might not be dealing a lot of damage yourself but the battles are still pretty tense. While you might not be personally fighting the enemies, you aren’t just sitting back doing nothing. The battles force you to constantly move around the battlefield redirecting your troops. For a game where you mostly are just giving orders to other units, Masters of Anima is still pretty action packed. This makes the battles exciting but it also leads to the game’s biggest problem.

The biggest problem that I had with Masters of Anima is that at times it can be kind of unforgiving. As I mentioned earlier you will have to regularly move your troops in order to get them out of the way of your enemies special attacks. It is imperative that you do this because otherwise you will get decimated. Your ranged units in particular have no chance of survival against one of the special attacks. One special attack could take out a majority of your units. If this happens you basically have no chance of winning the battle. In particular you need to keep your keepers safe. I honestly think they may be the most important guardian in the entire game. The reason that they are so important is that you will lose troops in every battle. This means that you will need Anima in order to replenish your troops. While you will be able to find some on the battlefield, there is not nearly enough to keep your troop levels up. Therefore you need to keep your keepers safe or at least keep enough Anima around to replenish them when you do lose them.

While the special attacks are usually pretty easy to avoid, you need to be constantly aware of them. If you aren’t constantly scanning for the special ability signals, you will miss one and then your troops will be devastated. You can survive an attack that takes out some of your troops, but if your troops are wiped out you will be fighting a losing battle that you will never be able to recover from. After losing a bunch of units you will quickly realize that you are fighting a losing battle. At this point you are probably better off just letting yourself die so you can restart the battle. You will get some unlucky breaks in some of the battles but the good news is that Masters of Anima is smart and gives you a checkpoint right before every battle so it only takes seconds to restart the battle.

So you might be thinking that Masters of Anima’s combat is really difficult. While you will fail some battles and can be utterly destroyed at times, I don’t know if I would classify Masters of Anima as a difficult game. I definitely wouldn’t say that the game is easy but I would say it is more moderately difficult than really difficult. It is one of those games where some battles are easy while others may take a couple tries. If you are not great at micromanaging troops you might have a little more difficulty with the game. If you are an expert at managing troops in RTS games though I would guess that you wouldn’t have much trouble beating Masters of Anima.

While a majority of the game is focused on the combat, there is some light puzzle/adventure mechanics as well. Basically you move around the environments collecting objects and opening up paths so you can continue your journey. Like in Pikmin, this mostly involves using your guardians to break down barriers and move objects. Being a big fan of puzzle games I have to say that the puzzle aspect of the game is somewhat of a letdown. The puzzles themselves are fine but they are quite easy. Basically if you fully explore the area you aren’t going to have any trouble solving the puzzles. This is far from a deal breaker but I wish the game would have done a little more with this aspect of the game.

As far as how long the game is, it is going to somewhat depend on the player. At this point I haven’t finished Masters of Anima yet but I have played the game for around seven hours and I would guess that I am through around 80% of the game. The developers say on average players will take 7-10 hours to complete the game and based on my experience I would say this estimate is probably accurate. How good you are at the combat likely will determine whether you are on the shorter or longer end of that range. The game’s length is also going to depend on how thoroughly you search the map. If you are only going to do the bare minimum, it will obviously take less time than if you fully explore each map to find the hidden objects. I have been trying to explore every inch of each map so the levels have taken me longer than someone who is just doing the minimum to finish a level.

One thing that I am not really a fan of with regards to the length is that I think the levels are a little too long at times. While some levels only take 20-30 minutes, levels can easily last longer than an hour especially if you want to fully explore the map. I like that the levels are long but I think the levels might have been better off being broken into smaller packages. The good news is that you don’t have to complete a level in one sitting. The game saves after every checkpoint so you can quit at any time.

While Masters of Anima can be a little unfair at times, it is still a very good game. The combat may mostly rely on micromanaging your troops but the combat is still action packed and exciting. The battles can get really tense as one mistake could lose you the entire fight. The good news is that the developers did a really good job with designing the controls. Controls for these type of games usually aren’t very good but they are simple and work really well in Masters of Anima. The combat is really good but I think the puzzle solving could have been a little more challenging as it is really easy.