Created in 1964, Mary Poppins is considered by many people to be a classic movie. Not surprisingly due to its popularity Parker Brothers decided to make a board game based on the Mary Poppins movie in order to make a quick buck. This lead to the creation of today’s game Mary Poppins Carousel Game. This might sound odd but I have actually never seen Mary Poppins before. Having no opinion on the movie I can’t say I had any expectations for the board game. Not surprisingly the Mary Poppins Carousel Game ends up being a very generic children’s roll and move game that was solely made to try and cash in on the popularity of the movie.

Each player chooses a playing piece and places in on the starting space. All of the players roll the die and the player who rolls the highest number gets to go first.

On a player’s turn they roll the die and move their piece forward the number of spaces that was rolled. 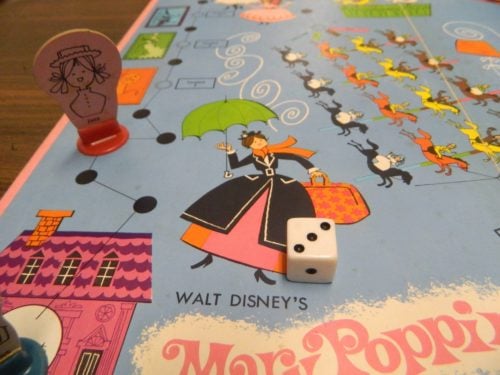 This player has rolled a three so they move forward three space.

If a player lands on a space that tells them to go back or forward, the player follows the direction. 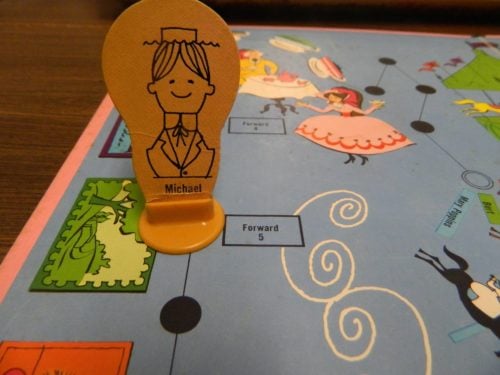 This player has landed on a special space which will move them forward five spaces.

If while moving a player lands on a space occupied by another player, they will move to the first space behind the piece that is unoccupied. 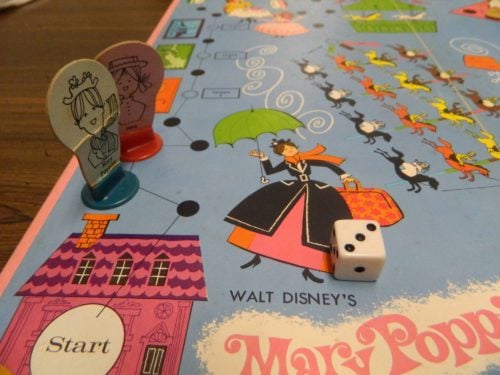 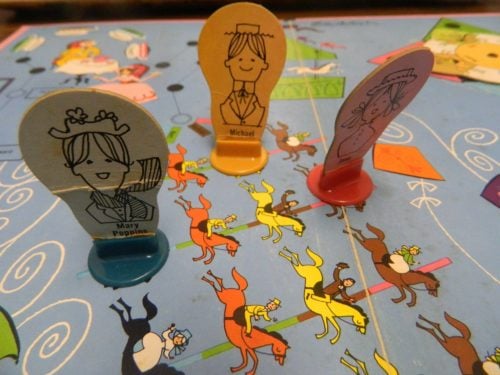 When a player lands on the “Go to the Carousel” space (does not have to be by exact count), they move their piece to their corresponding spot on the carousel. 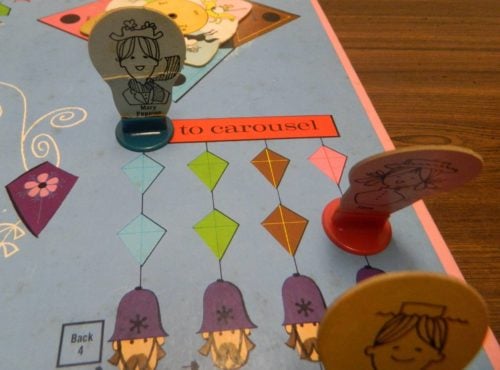 The blue player has reached the final space so they move their pawn to the carousel.

The player who is first to spin the carousel and have their pointer point to their color on the board wins the game. 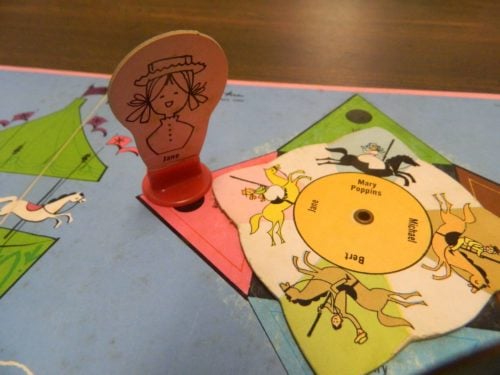 I am going to be honest with you. There really isn’t a lot to talk about when it comes to the Mary Poppins Carousel Game so this review is going to be quite a bit shorter than most of my reviews.

The reason that the review is going to be short is that the Mary Poppins Carousel Game is the most basic roll and move game that you are ever going to find. The game basically revolves around rolling the die and moving your playing piece the same number of spaces. Your only real impact on the game is hoping to roll high while avoiding spaces occupied by the other players or spaces that will send you backwards. There really isn’t much else to say about the main mechanic in the game as I am assuming that everyone has played a roll and move game sometime in their life. If you like roll and move games you will probably like the mechanic in Mary Poppins Carousel Game. If you don’t like these type of mechanics you aren’t going to like the game.

Before moving on there is one thing about the roll and move mechanic that I want to quickly discuss. The fox spaces in the game can be downright cruel at times. While it is somewhat due to players just being unlucky, the two fox spaces kept sending players backwards. The player that was in first in our game ended up getting stuck in an endless loop where they kept getting sent back to the same space. The foxes probably sent the player back to the same space at least five or six times. It kind of feels like the spaces were designed to send players back as much as possible. I think the reason why the foxes are so cruel is that they are on two consecutive spaces and they send you back five and six spaces respectively. This means that they set you up for another opportunity to land on them on your next turn. If the Mary Poppins Carousel Game was longer or more serious this would get quite annoying. Since neither are true though, it can actually be kind of funny when a player gets stuck in the never ending loop.

So after you have moved across the entire board you are then presented with the carousel mechanic. This ends up being a generic spinner mechanic as all you do is spin the spinner. I wouldn’t really have any issues with the mechanic except it doesn’t seem to have stood up over time. At least with my copy of the game the carousel no longer spins. I am guessing the board warped over time which prevents the spinner from spinning. With how old the game is I am guessing this is going to impact a lot of the copies of the Mary Poppins Carousel Game. Our group ended up improvising by having the player close their eyes and turning their carousel with their finger choosing when to stop it. While not as exciting as watching the spinner spin, this adjustment didn’t really impact the final outcome of the game.

If it wasn’t already pretty clear, the Mary Poppins Carousel Game is not a very good game. I don’t know how much you can really blame the game itself though. The game is basically a product of its’ time. Most children’s games from the 1960s were basic roll and move games. Basic roll and move games aren’t very interesting today but that is what you could expect from children’s games back then. The problem with basic roll and move games is that there is no skill or decision making in the game. Other than just rolling the die and spinning the spinner you make absolutely no decisions in the Mary Poppins Carousel Game. The game basically plays itself with a tiny amount of input from the players.

While I didn’t like the game I will give the game a little credit for its simplicity and length. The game has a recommended age of 5-10. Children under five that can count to six should be able to play the game though as the rules are self explanatory. As far as length unless the players get really unlucky I would expect the game to only last around ten minutes. The game is boring but at only ten minutes it doesn’t overstay its’ welcome.

Finally I would say the components are okay. The playing pieces are made of pretty thin cardboard and are nothing special. The game also has the issues with the spinner not working that well. I would say that the game’s artwork is pretty good for a 1960s children’s board game though. It is far from spectacular but I think fans of the movie will enjoy it.

The Mary Poppins Carousel Game is the very definition of a simple roll and move children’s game. Roll the die and move your piece. Whichever player gets to the finish first wins. This leads the game to being really simple and quick but there is next to no decision making and the game relies heavily on luck. When you finally get to the finish line you get to spin the spinner which is nothing special and due to age probably doesn’t work well. The one positive is that the game’s artwork is pretty good but the quality of the other components could have been better.

If you would like to purchase the Mary Poppins Carousel Game you can find it online: Amazon