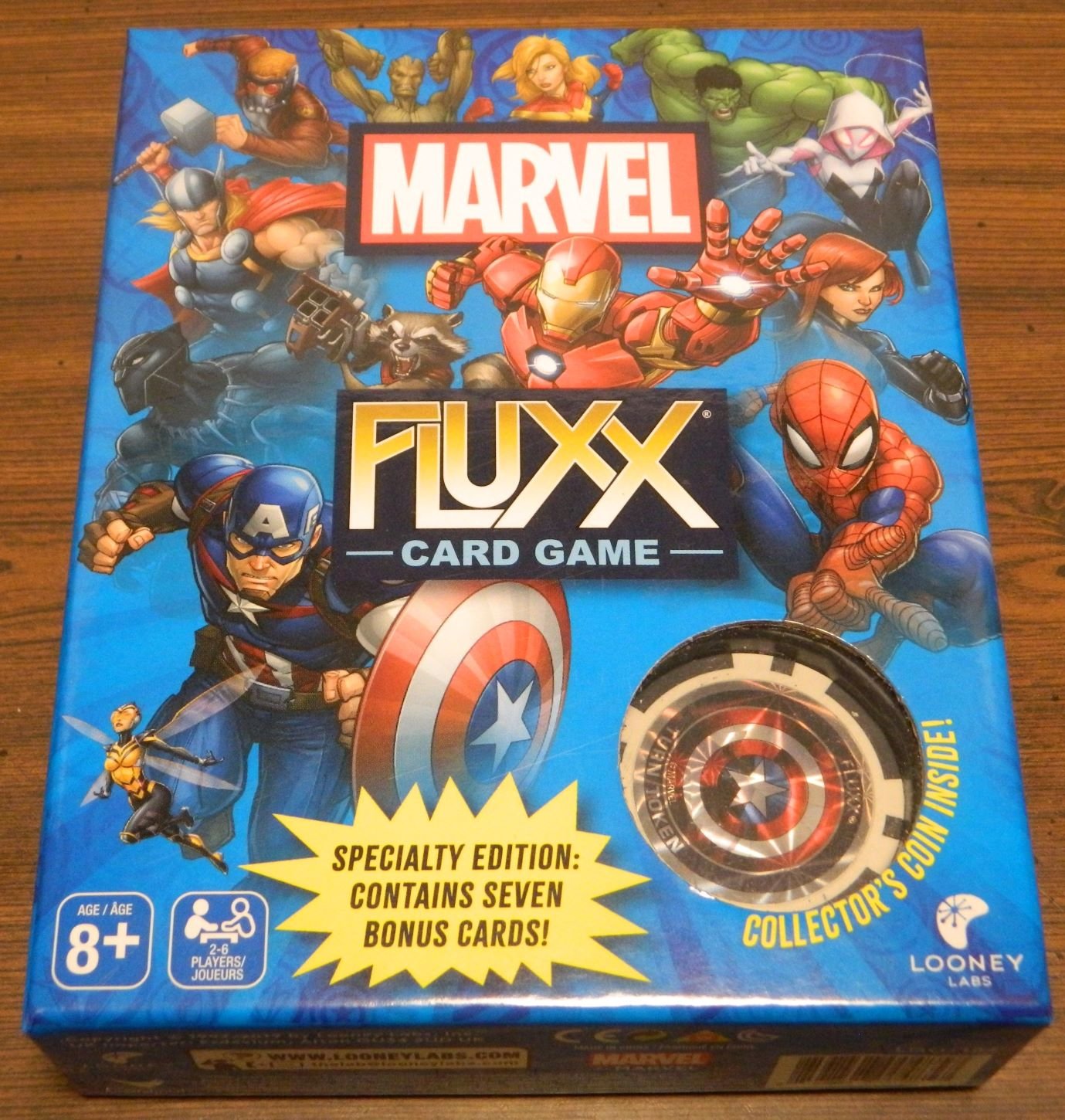 One of the biggest franchises on Earth right now is Marvel. While Marvel has been around for a long time its popularity has really grown with the start of the Marvel Cinematic Universe. Even though we have entered a new phase in the cinematic universe the franchise is still going strong with many more movies planned for the future. Like most people I am a big fan of the Marvel universe. On top of that I am a pretty big fan of the Fluxx series. As Fluxx has utilized quite a few different franchises in the past it was only a matter of time before Marvel Fluxx would get made. As I am a fan of both of Marvel and Fluxx I was excited to try out Marvel Fluxx. Marvel Fluxx might not drastically alter the Fluxx formula, but it does a good job with the Marvel theme leading to a game that fans of Marvel should really enjoy.

How to Play Marvel Fluxx

If you are familiar with the Fluxx series you shouldn’t need to read the How to Play section as Marvel Fluxx doesn’t add any new types of cards or mechanics.

Like all Fluxx games Marvel Fluxx is a game where the rules are always changing. A player’s basic turn consists of the following:

In addition to these actions players may have access to other abilities. These abilities can come from New Rule cards or Keepers and can be used once per turn before or after any of the above actions.

When a player is done with these actions play will pass to the next player clockwise.

In Marvel Fluxx there are four main types of cards. Each type of card has different abilities and can be played in different ways. To begin the game there are only two rules: draw one card and play one card. As the game proceeds New Rule cards will be played that change the rules of the game. When a New Rule card is played it will be placed in the middle of the table. Its effect goes into play immediately. For example if the previous rule was to play one card and a play two card is played, the current player will have to play another card before their turn ends.

If a player plays a New Rule card that contradicts a card already in play, the old rule card is discarded. When a Keeper card is played it is placed in front of the player who played it. Keeper cards are mostly used to help fulfill the requirements on Goal cards. Some Keepers have special abilities that can be used once per turn by the player who controls the Keeper. There is no limit on how many Keepers a player can have in front of them unless there is a Keeper limit card in play. When a player plays a Goal card it is placed in the center of the table. If there was already a Goal card in place, the old Goal card is discarded. Goal cards determine what the current objective of the game is. In order to win the game a player has to meet the requirements on the card with Keepers placed in front of them. My Thoughts on Marvel Fluxx

So I am not going to sugarcoat it. Marvel Fluxx is pretty much your typical Fluxx game. It features the four basic types of cards (New Rule, Keeper, Goal, Action) and doesn’t feature any of the newer types of cards like Surprises or Creepers. At its core it is pretty much your basic Fluxx game with the Marvel theme added in to give the game some flavor. For this reason most people that have already played Fluxx should have a good idea of whether or not they would like Marvel Fluxx. If you don’t really care for Fluxx or Marvel the game probably won’t be for you. People who like Fluxx though and are fans of Marvel should enjoy their time with the game.

For those of you not familiar with Fluxx it is pretty much a game where the rules are always changing. The basic rules are that you draw a card and then play a card. From there though the game could go anywhere. You can play cards that require you to draw or play more/less cards, determine how many cards you can hold, or even give you additional actions that you can perform on your turn. Even the goal of the game can change anytime. Whichever Goal card is currently in play determines what Keepers all of the players are trying to acquire.

With the rules and goal always changing it is not surprising that the game can become kind of chaotic. This leads to the game relying on quite a bit of luck as you aren’t going to win the game if you don’t draw the right cards. Most people who don’t like Fluxx list this as their main complaint as they don’t feel like you have any control over your fate in the game. While it is true that the game relies on a lot of card draw luck, I think there is quite a bit more to the game than that. There is strategy to Fluxx. It comes from figuring out how to use the cards in your hand to manipulate the rules for your own favor. Players that can come up with a good way of using their cards together can improve their odds in the game. This brings a little control to the game where it would otherwise rely entirely on luck.

While Marvel Fluxx doesn’t really add anything that drastically changes the game, it does tweak some things to take advantage of the Marvel theme. For the most part I think the game does a good job utilizing the theme. The artwork in the game is quite good like most Fluxx games. In addition to the artwork though the game has a few unique cards that play off the theme. Some of the abilities used by the cards have been used in other Fluxx games, but the game does a good job pairing them with things from the Marvel universe.

I would say that the card that utilizes the theme the most is “The Arena” card. The card is an action card that has the players use the Keepers that are in front of them for a battle. All of the players besides the player that plays the card chooses one of the Keepers that are in front of them to compete in the arena. After everyone has chosen they need to make their case to the judge (the player who played the card) for why their character would win in a fight against all of the other Keepers. The Keeper that the judge picks to be the winner stays in the game while the rest are discarded. While this creates a problem where a player could not pick a card as the winner solely because they think a player is close to winning, I thought the card was unique. I think it does a good job referencing the old argument of which superheroes would win in a fight and it gives players that know their Marvel characters a chance to eliminate some Keepers from their competitors.

Most of the other unique cards don’t drastically change the gameplay but do a good job tweaking some cards from previous games to fit with the theme. For example the game has a card related to the “snap” where all of the Keepers in play (except for Thanos and the Infinity Gauntlet) are picked up and half are discarded. The rest of the cards are redistributed to the players. The Groot Keeper forces the player who controls it to only say “I am Groot” or face a penalty. Even the Infinity Gauntlet grants you a power where you can draw an additional card from the draw pile and play it immediately. There is a downside to this card though as in one game a player used this ability and ended up giving the victory to one of the other players.

For the release of Marvel Fluxx Cardinal and Looney Labs collaborated. For this reason there are two different versions of the game. Cardinal first released their basic version of the game which retails for $15. Shortly after Looney Labs released a special edition that retails for $20. For the most part the two versions are the same. The gameplay and almost all of the cards are the same between the two versions of the game. The only significant difference between the two versions of the game is that the special edition includes seven additional cards. The additional cards included in the special edition are as follows: Keepers (Miles Morales, Nick Fury, Phil Coulson) and Goals (Avengers Assemble, Agents of S.H.I.E.L.D., Cap’s Biggest Fan, Spider-Verse). Outside of having different potential combinations for completing goals, these new cards don’t drastically change the gameplay. The version you should pick up depends on whether the extra cards are important to you.

On the topic of the components I would say that for the most part they are pretty similar to your typical Fluxx game. The card stock is slightly different from the typical Fluxx game but the difference is not really noticeable. The card layout is the same as every other Fluxx game. The game utilizes the same artwork style and I thought it works really well with the Marvel characters. The only two significant differences with the components are the size of the box and the collectible coin. The outer box is quite a bit bigger than the typical Fluxx box, but it is still pretty small. The collectible coin feels like a pretty nice poker chip. It doesn’t serve much of a purpose in the gameplay though as it is only referenced by one of the cards. Otherwise the coin is only used to indicate the current player.

Should You Buy Marvel Fluxx?

Anyone familiar with Fluxx should have a pretty good idea of what to expect out of Marvel Fluxx without having to play the game. This is because the game shares a lot in common with your typical Fluxx game. It is your typical semi-chaotic game where the rules are always changing. This leads to the game relying on quite a bit of luck but it is also quite fun as you figure out how to play your cards to manipulate the rules in your own favor. While Marvel Fluxx doesn’t drastically change the Fluxx formula, it is still a good game and does a good job with the theme. Outside of the artwork the game does a good job combining the theme with card actions which leads to some really interesting cards.

Ultimately your opinion of Marvel Fluxx is going to depend on your opinion of Fluxx and Marvel. If you don’t really care for either the game probably won’t be for you. If you like Marvel and Fluxx though I think you should really enjoy Marvel Fluxx. For those of you who have never played a Fluxx game before I think you would enjoy it if you don’t mind a game that can be a little chaotic as you try to manipulate the rules to your own benefit. I enjoyed my time with Marvel Fluxx and would recommend picking it up.

If you would like to purchase Marvel Fluxx you can find it online: Amazon (Cardinal Edition)