The object of Manga Manga is to have the most victory points at the end of the game (nine rounds).

Each round begins with the dealer giving each player six cards. The rest of the cards are placed in the center of the table in a draw pile. The dealer flips over the top card of the draw pile. If the card is a rainbow dragon (wild card) the next card is flipped over.

Players all play at the same time. Players compete to play a warrior of the color that matches the color of the shield on the last card played. No player may play two cards in a row. Before playing another card, a different player must play a card.

Rainbow Dragons are treated as wilds. The player who plays the card gets to pick which color needs to be played next. 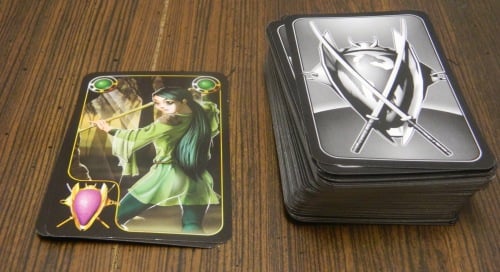 In the picture above, the previous player played a green card. As you can see in the bottom left corner, the shield is purple. The next card played has to be of the purple character.

When one player plays all of their cards, the round is over. The player who played their last card gets to randomly take a victory disk. The victory disk is worth either one or two points based on how many swords are pictured.

After 9 battles the game ends. Each player counts up their victory point total (swords on the back of their disks). Whoever has the most victory points is the winner. If there is a tie, another round is played (only with the tied players) and whoever wins that round is the winner.

Overall Manga Manga is a solid card game. The game is easy to play and learn. There are no broken rules that ruin the game and the game provides some enjoyment while playing.

Manga Manga is a speed card game. The object of the game is to find a matching card as quickly as possible and play it before one of your opponents are able to. Quick reflexes are key to winning the game. If you are not quick to react, you will be receiving a lot of consolation disks and you will not win the game.

The one unique element that Manga Manga tries to add to the game are the victory and consolation disks (these could be present in another game that I am unaware of).

The victory disks don’t add a whole lot to the game. The disks add the ability for players to get either one or two points for each hand won. The disks provide some variety to the game but I personally don’t like them. I don’t like them since all they do is add unnecessary luck to the game. While it didn’t impact the game I played, a player could end up winning less hands than another player and end up winning the game due to being lucky and getting two sword disks while the other players get only one sword disks. The game has three two sword disks which are far too many in my opinion. If there was only one two sword disk it wouldn’t have been much of a problem since it would rarely have an impact on the game. Instead there are three which makes it much more likely that they will have an impact on the game.

While I didn’t like the addition of the victory disks, I have mixed feelings on the consolation disks.

I don’t mind the exchange 2 and discard one disks. I like that these disks have an impact on the game but they aren’t too powerful. The exchange two disks might end up not even helping the player. These disks give a little boost to players who had a bad hand which helps offset some of the luck that comes from getting bad cards. These consolation disks help players but not so much that the player still needs to play well in order to win the hand.

I didn’t like the sword (victory point) disk since I don’t think you should be rewarded with victory points when you were the worst player that hand. The sword disk is just a catch-up mechanic and I don’t think it is fair too the other players. Theoretically a player who always places second or third could end up losing to a player that always gets last.

I also think the disk that requires all other players to discard their wild cards is too powerful. I don’t have a problem with the consolation disks giving the last player a little boost but I don’t think they should punish the other players. Wild cards are quite powerful in the game since they can be played at any time. Wild cards don’t really even count as cards in you hand since you can always play them.

Manga Manga’s saving grace had to be its’ theme and unfortunately the theme fails pretty badly. Manga could have provided a great theme for a card game but the theme is poorly utilized. The game tries to apply the Manga theme by saying that the various characters on the cards are competing in an ancient fighting tournament. Each new card that is played is a new challenger entering the battle. As you can probably tell the theme is tacked on. You could strip all of the Manga out of the game and it would be exactly the same game.

The artwork doesn’t help the them either in my opinion. Manga is well known for its’ unique and stylized artwork. Unfortunately in Manga Manga, the artwork is quite bland. The characters’ designs are not terrible but they lack any real personality. The characters look like stock Manga characters. While I wasn’t expecting amazing artwork, I expected better.