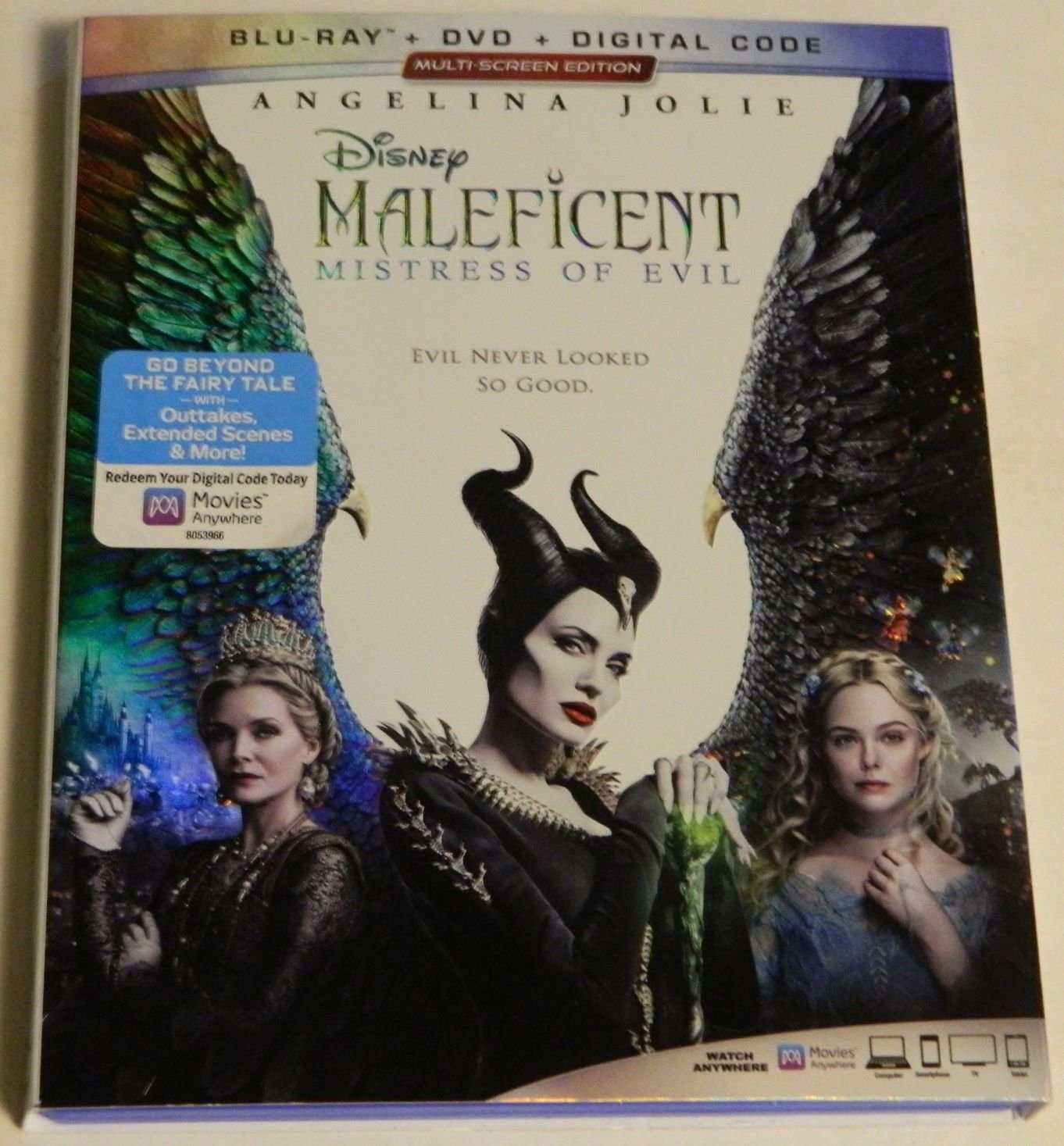 A lot of people have strong feelings about the live action Disney remakes that have been made over the last decade or so. Some people see them as interesting new takes on animated classics. Others see them as only being made to print money for Disney out of nostalgia as they generally stick pretty close to the original source material. While I can see the dissenters side as most do share a lot in common with the original movies, I generally like them as they are still enjoyable movies. Released back in 2014 Maleficent differed from a lot of the other live action remakes. While based on Sleeping Beauty the movie actually took a unique take on the original story by wondering what if there was more to the story of Maleficent. While it had some issues I genuinely enjoyed the original movie as it was a good example of what these live action remakes should strive for as it tried to do something new. When I heard that there was going to be a sequel though I was skeptical though as it didn’t seem like the type of movie that really needed a sequel. As I enjoyed the original movie though I wanted to still check it out. Maleficent Mistress of Evil is slightly worse than the original movie, but it does a surprisingly good job breathing life into the franchise with a unique new story.

Picking up five years after the original Maleficent, Aurora and Maleficent still live in the Moors. Despite being the “hero” in the original movie Maleficent is still seen as a villain throughout the kingdoms. When Prince Phillip, whose kingdom neighbors the Moors, proposes to Aurora it seems like the tensions will ease as the two kingdoms become united. Not everyone is thrilled by this development though as they plot to make sure the two kingdoms do not unite by turning the people against Maleficent. Can Maleficent and Aurora stop the plot before its too late and finally unite the kingdoms once and for all?

To avoid spoilers I am not going to go into too much detail with regards to the plot. I would say that the overall theme of the movie is about fear, hate and intolerance. Basically the plot is driven by some people inside Phillip’s kingdom being afraid of things that they are not familiar with, mainly the magical creatures of the Moors. Due to the fear of the unknown many people still fear Maleficent even though she is arguably the hero of the first movie. This fear of the unknown is what drives the villain and allows them to hatch their plan. While this type of theme has been used in many different movies, in the world today I think everyone needs the occasional reminder that you should not fear or hate someone just because they are different from you.

The first improvement made in Maleficent Mistress of Evil is that it is more original than the first movie. The original Maleficent had an interesting twist on the classic story of Sleeping Beauty, but it still followed the original story pretty closely. Outside of giving more depth to Maleficent the movie still follows many of the same plot points. Meanwhile Maleficent Mistress of Evil does not appear to be based on any source material as far as I am aware. Basically the filmmakers took the characters from the first movie and made a totally new story out of them. This leads to a unique story instead of retelling another story with a twist. This allows the movie to delve more into the fantasy elements as I think it does a better job creating a unique fantasy environment that you want to explore. This freedom to tell its own story allows the movie to utilize a greater scope. Maleficent Mistress of Evil introduces viewers to a much larger world leading to some interesting ideas that breath some life into the world.

Maleficent Mistress of Evil also has considerably more action than the first movie. Outside of a small battle at the beginning and end of the movie, the original Maleficent didn’t have a lot of action. This lead to a slower paced movie that was more character driven. Maleficent Mistress of Evil still has some of these elements as well, but it is much more focused on action. Instead of a couple small little battles, it features a pretty large scale battle featuring medieval weaponry and magical creatures. I found this battle to be quite impressive as it is large, pretty long, and features a lot of special effects. Fans of large fantasy battles should really like this part of the movie.

This might seem out of place but at times Maleficent Mistress of Evil kind of felt like what Game of Thrones would look like if it was made by Disney. The movie shares a similar feeling and a surprising number of plot points with Game of Thrones. The battle even seems familiar except they feature more magical creatures. The movie is obviously gauged more towards children though as it is PG after all. I will say that it feels darker than your typical Disney PG movie though. I am honestly kind of surprised that the movie got a PG rating. The movie features quite a few “deaths” and other tense action sequences which could scare some younger children. If there was a rating between PG and PG-13 I think it would definitely apply to Maleficent Mistress of Evil.

Due to the larger scale and the greater emphasis on magical creatures the movie relies more on the special effects than the first movie. This is both a positive and negative for the movie. At times I thought the special effects were quite impressive. For the most part I thought the design of the creatures and locations were really good and were improvements over the original film. The action scenes and the final battle are quite impressive as well. Most of the time the movie looks really good on Blu-ray. The special effects are usually pretty good, but then you encounter the times where they don’t work quite as well. Every so often there will be moments where the special effects stick out which kind of takes you out of the experience.

While there are quite a few positives over the original movie, I think the overall plot is not quite as good. I think this is due to a couple reasons.

I liked elements that the freedom of creating their own story brought to the movie, but it leads to an inconsistent plot at times. I really liked parts of the plot but I thought other parts were unnecessary or dragged on for too long. At times the movie goes on little detour stories that don’t really add much to the plot. This leads to some slow points which the movie would have probably been better off cutting out or at least trimming down. One sideplot in particular I think drags on far too long leading to some of the slowest parts of the movie. Basically the movie starts off kind of slow, picks up some, hits a roadblock, and finally finishes pretty strong. Maleficent Mistress of Evil just feels more inconsistent than the first movie. At its highest points it is probably a better movie, but Maleficent is more consistent as it tells a more streamlined story.

The other problem with the plot is that it just feels kind of stupid at times. This might be a slight spoiler but the villains in the movie are so obvious. When the villains first appear you can immediately tell that they are going to be the villains. The villains in the first movie had some nuance which is lacking in the villains in Maleficent Mistress of Evil. The villains just feel like your stereotypical villains where they don’t really bring any surprises or anything unique to the table. This doesn’t just stop with the villains though. I enjoyed my time with the movie, but there were times that I just felt like yelling at the characters. The characters at times make some really stupid decisions that don’t make a lot of sense. This is just another example of the inconsistency in the plot.

As for the bonus features they are basically exactly what you would expect. The special features for the most part are behind the scenes looks at how different parts of the film were made. They give some interesting behind the scenes looks for fans of the film, but they are on the shorter side where they could have given viewers a deeper look. Big fans of the movie or filmmaking in general will probably like them, but for everyone else they probably can be skipped as I didn’t really think any of them were must see. For those that are interested the Blu-ray features the following special features:

If you never really cared for the original Maleficent the sequel probably won’t be for you. Fans of the original movie or fantasy movies in general will probably enjoy the movie though and should consider picking it up.

Origins of Fey, Aurora's Wedding, If You Had Wings, Maleficent: Mistress of Evil VFX Reel, Extended Scenes, "You Can't Stop the Girl" Performed by Bebe Rexha