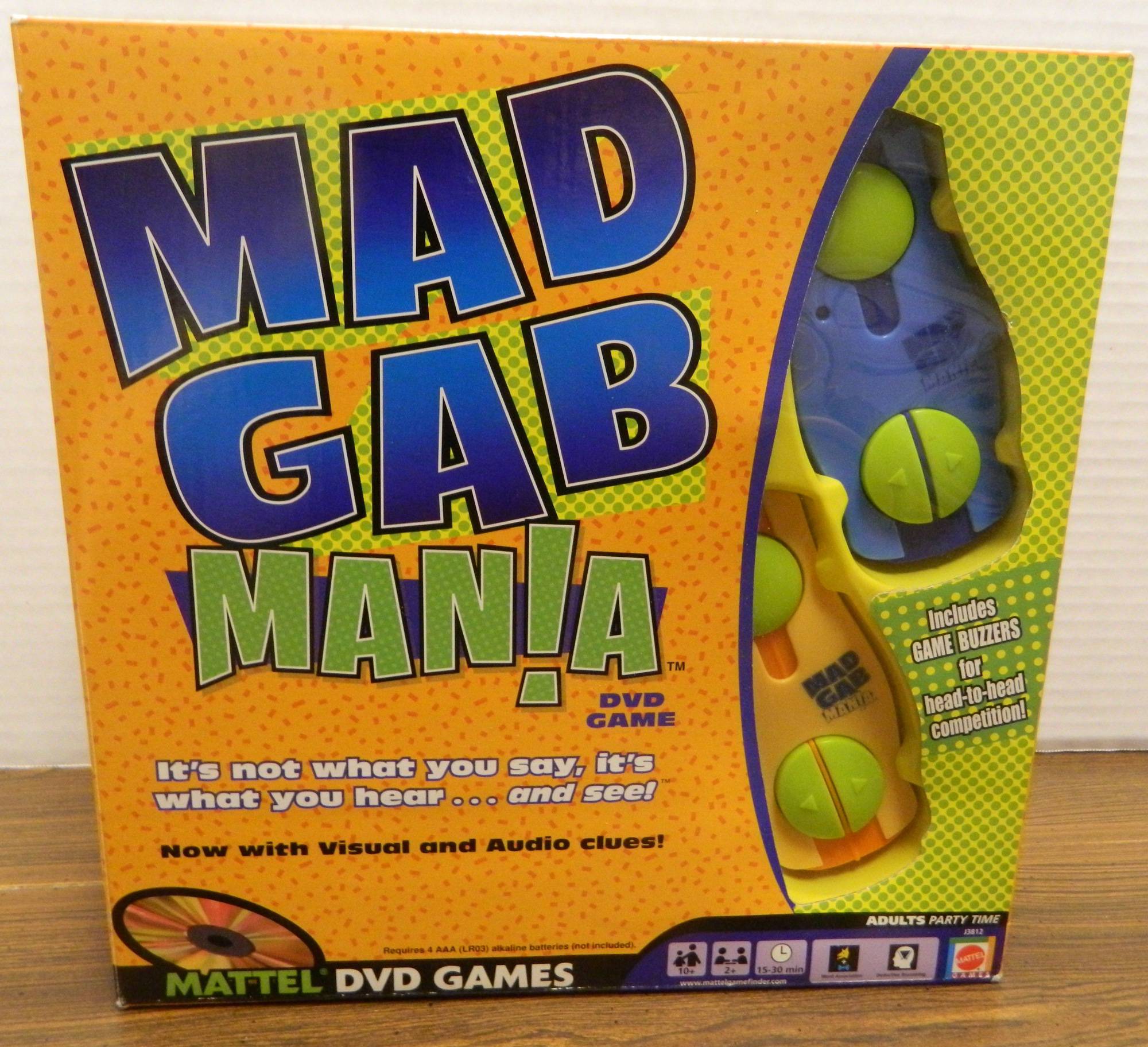 Back in 2002 Scene It? was released and became an instant hit. In the early 2000s the Scene It? franchise was so popular that it was one of the pioneers of the DVD genre of board games. Many publishers found Scene It?’s success and tried to cash in on it themselves. This lead to many popular board games either being turned into a DVD game or implementing a DVD in some fashion. One of the games that decided to try out a DVD format was the 1996 party game Mad Gab. When thinking of games that should be turned into a DVD game, I wouldn’t put Mad Gab at the top of the list. Mad Gab Mania tries to do something unique by turning Mad Gab into a DVD game but you are basically left with a game that adds nothing but a hassle to the original game.

How to Play Mad Gab Mania

For those of you who have never played Mad Gab before, the premise of the game is to guess the phrase presented to you. The game will use words and pictures to represent the phrase. By repeating the words over and over again quickly they begin sounding like another word/phrase. Players are trying to figure out this other phrase within the time limit.

In Mad Gab Mania the DVD will choose between four different games for the players to play.

Head to Head: Head to head is played like normal Mad Gab. The game will show a combination of pictures and words to the players. As time passes the game gives the players additional clues but reduces the value of the question. The first team to ring in gets to guess the answer. If the team is correct they win the corresponding number of points. If they are incorrect the other team wins the points.

Pass or Play: One of the teams are given the choice to either pass or play. Choosing play lets the team answer the puzzle on their own while pass forces the other team to answer the puzzle. These puzzles are the same as the head to head puzzles except that players are given less time. If the team is correct, they receive the points. If they are incorrect, the other team receives the points.

The first team to score a certain amount of points or have the most points after a certain number of questions wins the round.

The first team to win two rounds, wins the game.

My Thoughts on Mad Gab Mania

So I want to begin by saying that I have always been awful at Mad Gab. I get the idea behind the puzzles but I just have trouble solving them for some reason. I bring this up because it likely is going to have some impact on my feelings about Mad Gab Mania. I can understand why people enjoy Mad Gab but I can’t say that it has ever been my type of game. If you like Mad Gab my issues with the game will still be relevant to you but I think you will enjoy Mad Gab Mania quite a bit more than I did.

Basically Mad Gab Mania is what you get when you turn the original Mad Gab game into a DVD game. The basic premise of the game is pretty much the same as you are sounding out the words/pictures on the screen in order to figure out the hidden phrase. The head to head rounds are the same as the original game except that both teams play at the same time. The first team to ring in gets to guess the phrase. If they are right they get the points but if they are wrong the points go to the other team.

The one “unique” round is the Scramble Swipe which also happens to be my least favorite round in the game. The premise behind Scramble Swipe is that the team that lost the previous round can steal all of the points won by the other player by being able to unscramble a few words within the time limit. The idea of a unscramble round is not a bad idea but I hate the idea that it allows you to steal points from the other team. This round basically makes the previous round pointless as the team that solved the last puzzle might receive zero points. It gets even worse since most of the unscramble puzzles are pretty easy especially with the clues that the game usually gives you. Honestly if you could know ahead of time that the next round was going to be a Scramble Swipe round, you might be better off purposely losing the previous round since you likely will be able to steal the points that the other team just won.

At first this might not seem like that big of issue but the biggest problem that I had by far with Mad Gab Mania is with the remotes. At first they seem kind of clever as you can program them to work with all/most DVD players. The process itself is also not that complicated. The problem is that it takes too long and doesn’t work half of the time. The process to set up the remotes takes around 10 minutes mostly due to to process being unskippable. You have to listen to the DVD explain how to set up all three buttons on both remotes twice despite the fact that after learning how to setup one button, the rest of the process is pretty self explanatory. I could have set up the remotes in a fraction of the time but the DVD doesn’t let you.

After going through the drawn out process of setting the remotes, there is no guarantee that they will even work right. After setting up both remotes, one worked while the other failed to work. We tried to set up the remotes a second time and once again one of the remotes didn’t work. We were about to abandon the game until we realized that you didn’t really even need the remotes to play the game. You can to go through the pairing process (the game doesn’t let you play if you don’t) and then just use your normal DVD remote. If the two teams can share the one remote, one team just uses the up arrow to ring in while the other team uses the down arrow.

I am guessing the game included the remotes to make the game more appealing but I think it would have been better to just have the players share the normal DVD player remote. At the very least the game could have made it optional for you to set up the remotes. Players that didn’t want to go through the hassle could have just used the regular DVD remote while players that preferred the Mad Gab Mania remotes could have went through the process of setting them up.

The fact that the DVD doesn’t really add much to the game and forces you to have to program the remotes, is compounded by the fact that the announcer on the DVD is quite annoying. If you took all of the annoying announcers from DVD games, I would say that the announcer for Mad Gab Mania is one of the more annoying announcers. The problem is that the DVD keeps replaying annoying corny jokes and generally brings very little to the actual game. I actually think the game would have been better off without the announcer at all as he doesn’t really bring anything important to the gameplay and you wouldn’t miss him if he wasn’t there. I would actually consider muting the DVD.

Should You Buy Mad Gab Mania?

Mad Gab Mania tried to turn Mad Gab into a DVD game and ends up showing why that wasn’t a great idea. The good DVD games succeed because they bring something new that couldn’t have been done with a traditional board game. Mad Gab Mania fails to do anything that couldn’t have been done with cards like the original game. Three of the games are basically the same as the original Mad Gab with only slight variations between them. The one unique game is just a traditional word scramble that is regularly too easy and allows teams to steal points from the other team. These issues are combined with remotes that are a pain to setup and an announcer that is kind of annoying. Basically you would be better off just sticking with the original Mad Gab.

If you would like to purchase Mad Gab Mania you can find it online: Amazon