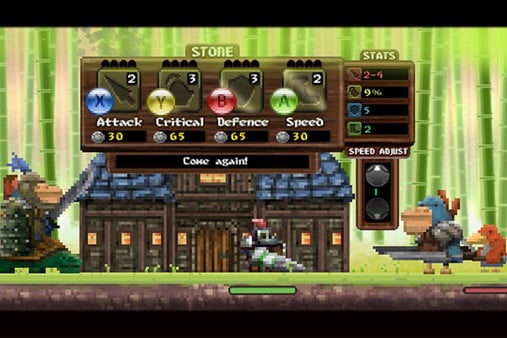 Loot Hero DX started its’ life as a free flash game (Loot Hero) on the internet. Due to its’ success, the developers decided to expand the game and create a full retail release. A while ago I purchased an indie game bundle which included Loot Hero DX. The game looked interesting at the time since it was trying to do something new. At the time that I purchased the bundle the game was still in Steam Greenlight so I decided to wait to play the game until it was released on Steam. Early in July the game was finally added to Steam so I decided to give the game a try.

Take A Right And Then A Left

For those of you not familiar with the premise behind Loot Hero DX, you play as a generic knight. This knight is impatient though and doesn’t want to sit through your typical video game battles. Your knight would rather ram through the enemies as quickly as possible in order to reach the final boss and move onto the next level. When I saw a gameplay video for Loot Hero I was intrigued since the premise of just running through your enemies looked interesting.

The gameplay pretty much works like this. You press right to move your character right. Any enemy that your character encounters will be automatically attacked by your character. Once you defeat the enemy your character will move onto the next enemy and so on. Enemies will fight back though so you need to watch your health. When your health gets low you need to either stop and wait until you health regenerates or head back to the nearest shop which will heal you much quicker.

If you ever encounter an area where you can’t make any progress you can always run to the left and kill more enemies in order to get money to purchase new upgrades. At times you will end up having to run back and forth killing enemies and picking up all of the loot that is dropped in order to upgrade your character enough to proceed with your wave of destruction.

If this sounds a little too simple it is because as a whole the game is really easy. Loot Hero DX is a casual game. If you want a challenge Loot Hero DX will not give it to you. It is the type of game that you should play if you have a couple spare minutes to kill and don’t want to play a game that will tax your mind. The punishment for “dying” clearly shows this emphasis on mindless fun. When you “die” you are sent back to the nearest shop space and you appear to lose some of your money/experience. This punishment is so light that you only end up wasting a short amount of time getting back to where you were before dying.

This Game Should Have Been Called Grind Fest

With a name like Loot Hero you might assume the game might be like Diablo or Borderlands where you encounter so many items that you have no idea what to do with them. I think a more appropriate title for Loot Hero DX should have been grind fest. Grinding is a term used in gaming which means having to fight the same enemies over and over again in order to gain experience and upgrade your character. This definition describes Loot Hero DX perfectly. Loot Hero DX actually includes only ten different levels which you can beat in less than ten minutes. For the rest of the game you are just repeating the same levels over and over again fighting the same enemies as you and your opponents get stronger.

In addition to repeating the same levels over and over again, grinding is made necessary in order to progress at certain parts of the game. If you speed through levels you will eventually run into a situation where the enemies start to put up a real fight. When you hit one of these levels your movement will slow to a crawl as you try to kill enough enemies to buy enough upgrades to continue rampaging through the enemy hordes. Usually you are best off trying to finish these levels as quickly as you can. After beating the level you should repeat a prior level so you can easily go back and forth across the level killing enemies at will which will earn you a lot of money. You can then use this money to purchase the upgrades to continue your rampage through the enemy hordes. After doing this for a while your character will be strong enough that you can continue to speed run your way through levels.

This grinding leads to by far the biggest problem with Loot Hero, the repetitive gameplay. The whole game entails running left and right killing enemies in order to get enough cash in order to purchase upgrades that will let you kill enemies quicker and let you face stronger enemies. Rinse and repeat. This is essentially what you do for the entire game. I admit that this is kind of fun at first but the novelty runs out pretty quickly. After about an hour or so you will likely get sick of the game.

Admire the Artwork As You Zoom By

One of Loot Hero DX’s greatest strengths is the artwork.  While it is not the best 2D artwork I have seen, if you like pixel art you will like the classic 2D style of the game.The character models and the environments are done well. You can tell that work was put into the graphics.

Its too bad that you don’t get the time to appreciate it. After the first couple of levels your character is usually moving so quickly that you can barely tell what is going on. The enemies pretty much blend into the background. The only way to actually see the artwork is to play the levels slow and methodically. The game is really not meant to be played in this manner though so the nice graphics are kind of wasted.

Loot Hero DX is not a very long game. You can make an argument that the game is actually only ten minutes long and you just end up playing the same game over and over again with a stronger character. I ended up playing the game for a little less than 2 hours and I got all but one of the achievements. It probably would have taken another half hour to an hour to get the last achievement but it wasn’t worth it for me. At the hour to hour and a half point I was getting sick of the game so I decided to quit playing.

The thing with Loot Hero DX is that I don’t think it technically ever ends. You can keep playing the levels over and over again as you and the enemies both get stronger. I don’t see many people wanting to play the game for more than two or three hours though. I would have quit around the hour and a half mark but played another fifteen minutes in order to get the second to last achievement and to see if anything occurred after you beat level 100. To save you time, nothing new happens after beating level 100.

While the game is short, Loot Hero DX is also pretty cheap. The game retails at only $2.99. I personally think that is still too high for the game since I think the game is more like a $0.50 to $1 game. I got the game in a bundle and at bundles prices I wasn’t disappointed with the game. I wouldn’t recommend purchasing the game unless it is included in a bundle or it has a steep discount though.

Loot Hero DX had an interesting idea for a game that works for a short while. It is satisfying being able to just run through enemies defeating them almost instantaneously. The artwork is pretty nice and the controls are really simple. The game gets boring and repetitive quickly though. The game is really short since it also only takes around three hours to get all of the achievements.

Loot Hero DX is not a terrible game but it is not great either. You could maybe waste a couple hours with the game as a quick distraction. If the concept sounds interesting to you, you should get some enjoyment out of the game. I would wait until the game is on sale or included in a bundle though before purchasing.