To be the last player remaining or be the first player to get all five of their cars across the bridge. 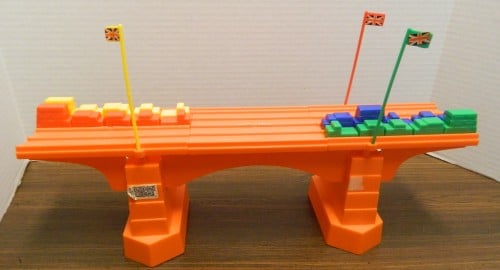 Here is the setup for a four player game of London Bridge. Two sets of cars are setup on both sides of the bridge based on the arrows shown on the bridge. 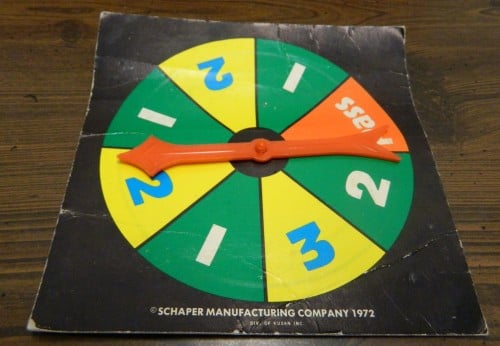 The player has spun a two. The player would move all of their cars forward two spaces. 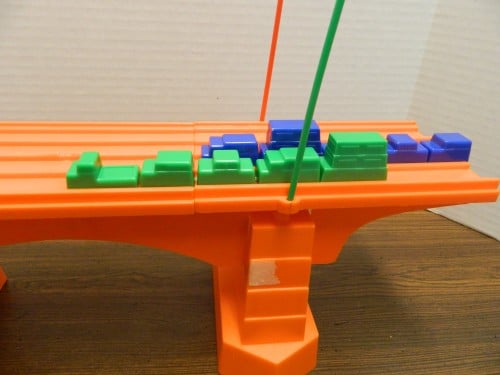 Since the green player spun a two they must move all of their cars forward two spaces.

Players keep spinning and moving their cars until the center platform collapses. The player who moved during the turn the bridge collapsed is eliminated from the game. The bridge is reset for the players still in the game. 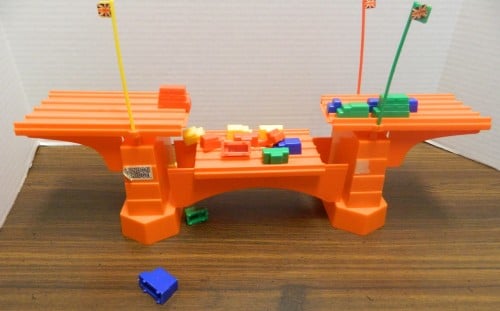 The bridge has collapsed. Whoever was the last player to move one of their cars is eliminated from the game.

A player can win London Bridge in two different ways.

The more likely scenario is to be the last player remaining after all of the other players are eliminated due to knocking down the bridge.

If a player can successfully get all five of their cars safely across the bridge, they automatically win the game.

The Schaper Manufacturing Company was a toy company that made some notable board games from 1949 until it was acquired by Tyco Toys in 1986 (Wikipedia). While Schaper is not the most recognizable board game company, the company did bring us several children’s games that are still loved today. Their most well known game has to be Cootie. Other notable games include Ants in the Pants, Don’t Break the Ice, Don’t Spill the Beans, Skunk and Stadium Checkers.

Despite having several hits, not all of their games caught on. One of those games was London Bridge. The game was apparently based off the song/rhyme “London Bridge is Falling Down”. I find it curious that the designers of the game thought it was a good idea to create a game where children would cause destruction that would kill many people if it happened in real life. The game itself is harmless but if you really think about the ramifications of a lot of children’s games they can be kind of dark.

I am usually a sucker for older children’s games with strange themes and mechanics. When I found London Bridge at a local thrift store for a couple dollars I had to pick it up to see what it would play like. While the game looks charming, London Bridge is a pretty poorly designed game that relies entirely on luck.

The main reason that the London Bridge game is not very good is because there is no skill in the game. You spin the spinner and push your cars. There is nothing you can do to improve you odds in the game. You need to just rely on getting lucky with the spinner. The only decision you can make in the entire game is what order you would like to place your cars in at the beginning of a round. I doubt that even makes much of a difference.

Your fate will come down to how you and the other players spin as well as the turn order. Since the bridge always gets to a point where any movement will crash the bridge, you need to get lucky and have that point happen on another player’s turn. If it is time for the bridge to collapse it doesn’t matter how carefully you push the cars since it will still fall down. Unless you somehow have perfected a spinner strategy, you will have no impact on what happens in the game. You pretty much just spin and wait for someone to win. This leads to a pretty dull game.

Honestly the one good thing about the game is seeing the bridge collapse. While you can get a hint at when the bridge is starting to fall down, the bridge usually collapses all of a sudden. For some reason it is satisfying to see the bridge collapse and see cars flying all over the place. I honestly think playing with the cars and the bridge would be more fun than actually playing the game.

This brings me to the contents which are kind of hit and miss. I give the creators credit for creating components that work as intended and are easy to assemble. While the game looks like it might take quite a while to assemble it only takes a couple of minutes at max. At first sight the bridge looks kind of flimsy. It looks like it would either hold no cars or hold all of them making it impossible to fall apart.  The bridge does its’ job quite well though. I have to give props for the cars as well. It is nice that a game from the 1970’s had different styled cars since the game could have easily just made all of the cars look the same and it would have only made minor differences to the game.

I mostly had three complaints with the contents.

While it looked like it could be a charming children’s game, London Bridge is a boring dull game that has little to no player input. You just spin and move until the bridge collapses. The bridge is then reset and you do the same thing over again. While the game was meant for children, the game could have still included a little more strategy/player input. London Bridge is just not a good game. There is really only two reasons to pick up the game. If you have fond memories of the game from childhood or you like collecting older children’s board games you might get some enjoyment out of London Bridge. Otherwise I would recommend staying away from London Bridge.