The first round begins when the first card is revealed. All of the players look at the card and try to see how many treasures can be reached from the starting spot without going through any walls, skulls or colored doors. Players may not use their fingers to trace their way through the maze. When one player thinks they know how many treasure chests can be reached, they put their hand on the card and call out their answer. That player then looks at the back of the card to see if they were right. The correct answer depends on how many keys the player has (0 keys- 1st number, 1 key-2nd number, 2 keys-3rd number, 3 keys-4th number). If they are right they get to keep the card. If they were wrong they put the card back without letting the other players see the solutions. The player who guessed incorrectly is out for the rest of this round. The other players then get a chance to guess. If all but one player gets it wrong, the player who didn’t guess automatically gets the card. Once a player wins the card a new round begins with the next card being revealed. 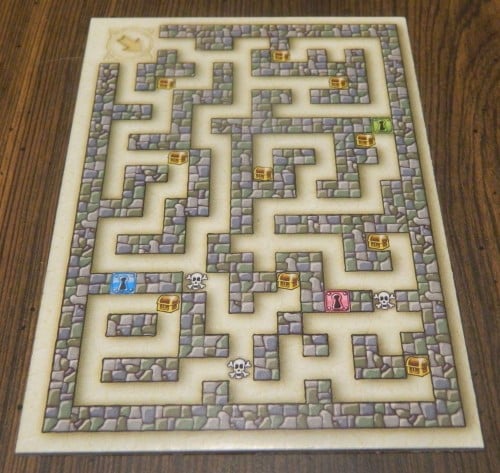 In the above example the players start at the arrow in the top left corner. They follow the corridors to see how many treasures they can gather without going through any walls, skeletons or doors in which they don’t own the key. 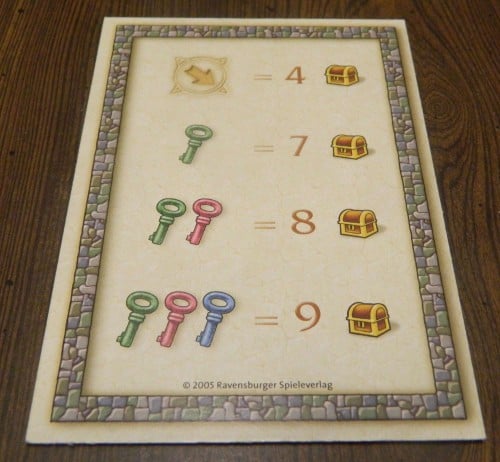 Once a player thinks they have the correct answer, they flip the card over (without showing the other players) and check to see if they are correct. The player checks their guess against the row that corresponds to how many keys they own.

Once a player has acquired a key, the player must also look through any passages that can be accessed by going through doors that match the keys that they own.

The game continues until one player gets their fifth labyrinth cards. That player wins the game.

The aMAZEing Labyrinth was one of Ravensburger’s biggest hits when it came out in 1986. Due to it’s success, it has spawned several sequels/spin-offs. One of these spin-offs is Labyrinth Treasure Hunt created in 2006 by Ravensburger. Having heard of The aMAZEing Labyrinth but having never played the game before, I was interested to see how good the spin-off game would be. Since I have never played the original game I am unable to make a comparison between the two games. I would say though that Labyrinth Treasure Hunt is a pretty average game that works better with children than adults.

I thought the idea behind the game was pretty interesting. It is kind of fun to mentally trace your way through the mazes in order to figure out how much treasure you can gather. The game is easy to learn and teach. I see Labyrinth Treasure Hunt as a family game meant more for families with children though. That is mostly due to being too easy for adults. Adults won’t feel challenged by the game. The game is probably the perfect difficulty for children though. If an adult/older children would play with younger children, the older players would need to be given some handicap in order to make the game fair.

The simplicity of the game really hurts the game for adults. I only played the game with adults. On average each card took around 15-30 seconds for someone to finish the maze and submit a correct answer. We ended up playing two games that lasted around five minutes each. While the addition of the keys made the game a little harder, it was still way too easy.

The quickness of the game really showed off how few cards the game actually comes with. While the game comes with 36 different cards, we went through 2/3 of the cards in two games. If we would have kept playing we would have finished all of the cards in around 15 minutes. This makes me worry about how long the game will remain fresh. Obviously no one is going to remember the cards so you can replay the game using the same cards. I think you could tire of using the same cards pretty quickly though.

One of the more unique aspects of the game are the keys. I like the idea of the keys but also hate it at the same time. The keys were added to help struggling players while also providing a catch-up mechanic. I think this a good idea especially if you are playing the game with younger children since the keys could be used as a tool to handicap the older players. The keys don’t really make the game harder but they do increase the amount of time required to come to a solution.

The problem with the keys is that they do too good of a job. If the players are equally skilled,  the following scenario will play out in pretty much every game. One player will get their first key. This will slow them down enough for the other players to also get their first keys. Next someone will get their second key. The other players will shortly follow. The same process happens with the third key. Due to this pattern, the keys essentially make the early rounds unimportant since all of the other players are likely to catch up. The only real way to avoid this situation is to have the player in first start to make guesses/recklessly go through the maze in order to try and beat the players that have to go through less of the maze.

Guessing also presents a problem for the game. If players begin to just start guessing, it really starts to ruin the game experience. When someone guesses they need to flip over the card to see if they are right. If they end up being wrong it is really hard to remember where you left off so you end up having to restart from the beginning. Guessing is actually a semi-valid strategy though. Since there is a small range of numbers that the correct answer always seems to be in, a player could end up just guessing a number in that range and end up getting several cards. You want to avoid playing this game with a person that is going to guess in every round since it will suck all of the fun out of the game. The game really should have come up with a stronger punishment for guessing wrong to deter players from guessing. One possible punishment could be losing one of your cards for every incorrect guess.

One thing I really liked about the game was the components. It shouldn’t come as a surprise though since Ravenburger always makes games with good components. While all of the components are made of cardboard, the cardboard is thick and durable. My only complaint is that I think the maze cards are too small. Due to the cards’ size, all of the players have to sit very close to one another in order for everyone to see the card. Don’t plan on playing this game at a large table since all of the players will not be able to see the card. This problem could have been fixed by making the cards and print a little larger.

Labyrinth Treasure Hunt was an interesting idea for a game. You can have some fun playing the game but due to its’ simplicity the game is just too easy for adults.

I think the game will work great for younger children though. The game is simple enough for children to understand and it should challenge them enough to still be fun. If played with older children or adults though some handicaps will need to be put in place in order to make the game more fair. If you think this game is something your child will enjoy, they most likely will.

If you don’t have any children to play the game with, I think it would be best to pass on Labyrinth Treasure Hunt. The game is just too simple in my mind to hold an adult’s attention. According to Board Game Geek, a lot of users compared Labyrinth Treasure Hunt to Ricochet Robots. Even though I have yet to play Ricochet Robots, it may be a better option for adults since it should provide more of a challenge.