Originally released in 1991 by Milton Bradley and later getting a Bob the Builder re-theme in 2002, Knockout is one of those games that I have regularly seen at thrift stores and rummage sales and yet had never played before. While it was first introduced when I was really young, I never got the game as a kid and since the game looks kind of kiddy I never bothered picking it up before and trying it out. I decided to finally give the game a chance as while not highly original I have always liked the occasional dexterity game. While Knockout shares a lot in common with most Jenga-style games, it does add an electric hammer which you are forced to use in order to remove the bricks. The electric hammer does a good job of differentiating Knockout from other similar games but at its core it is still a pretty average dexterity game.

How to Play Knockout 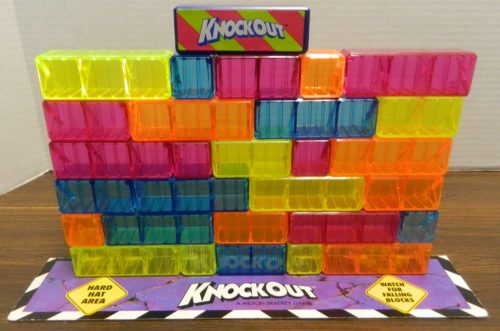 A player begins their turn by rolling the die. The color they roll determines what color brick they will have to remove from the wall. 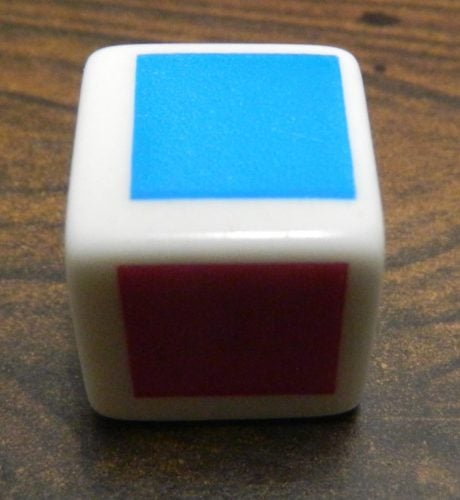 This player rolled blue so they will have to remove a blue brick from the wall.

If they roll the star they can choose any color brick. 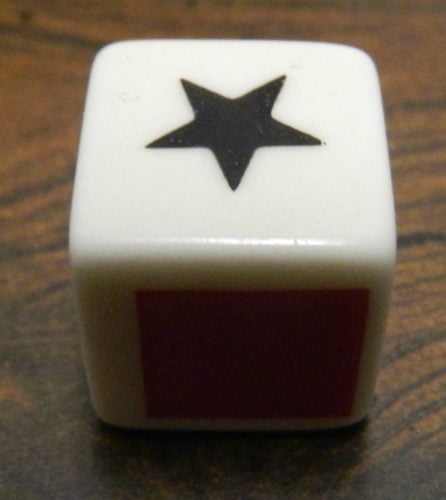 This player rolled the wild star so they can choose which color brick they want to remove from the wall.

When choosing which brick to knock out of the wall you must follow these rules: 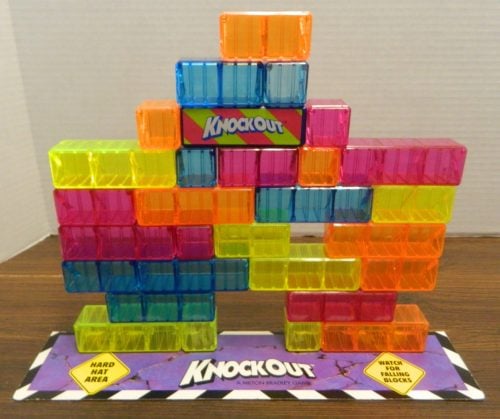 In this setup the player couldn’t remove the orange brick on the top or the orange and pink bricks next to the knockout brick. 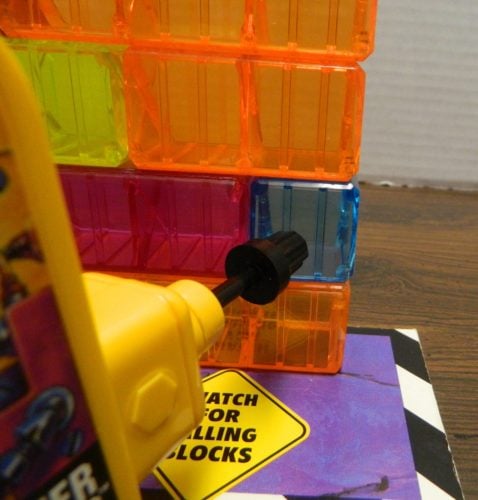 This player is trying to remove the blue brick from the wall.

If you successfully remove the brick you chose from the wall, you have to place it on the same level as the knockout brick or a higher level. When placing bricks the “ribs” need to be placed vertically. 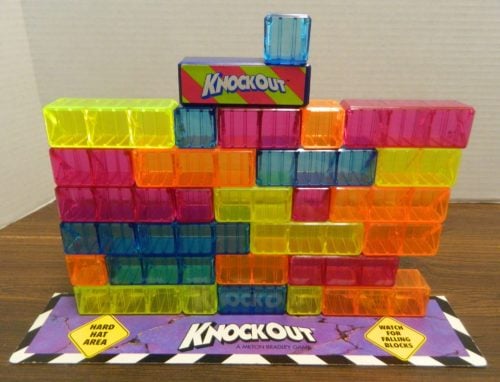 This player removed the blue brick from the wall and then placed it on top of the wall.

If while removing your brick you end up knocking out additional bricks, those bricks are set aside for the next round. 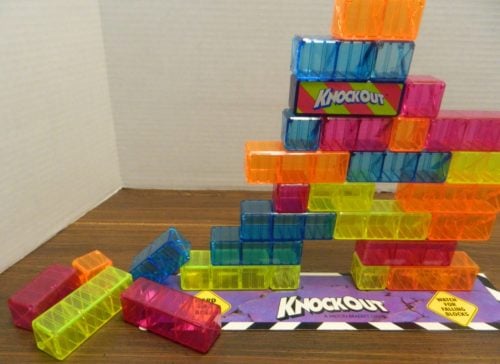 While removing their brick this player knocked several bricks from the wall. The brick they were trying to remove is placed on the top of the wall. The rest of the bricks are removed from the game.

The player then passes the rammer hammer to the player on their left.

When the knockout brick hits the playing surface, the player who is responsible is eliminated from the game. The wall is set up again and the rest of the remaining players play another round.

The current player made the knockout brick touch the playing surface so they have lost the game.

My Thoughts on Knockout

In the past I have looked at quite a few stacking dexterity games. Basically these games are your typical Jenga game where players take turns taking one of the blocks from the tower and moving it to the top of the tower. Generally I don’t have strong feelings either way about the genre as I have some fun playing the games but it isn’t one of my favorite genres either. I would say that the biggest problem that I have with the genre is the fact that it isn’t particularly original. While some of the games are actually unique, for a lot of the games it just feels like if you have played one game you have played them all. With Knockout being a game designed for children I thought it was going to fall into the later category as the only thing it truly adds to the genre is the “rammer hammer”.

While on the topic of being simplistic, it is not particularly surprising that Knockout is one of the easier stacking games that I have played. The game was designed for kids as young as seven so that is what I expected. Knockout is simplistic for a couple reasons. First the rules are pretty basic. I honestly don’t know why the game has a recommended age of 7+ as kids younger than that should have no problems playing the game. They might not understand the strategy of the game but they shouldn’t have any trouble playing the game. Second the bricks are pretty large so you don’t have to worry about hitting another brick unless you are really careless. It is not particularly difficult removing bricks from the wall until you get to the point where all of the bricks are load bearing. Most of the decisions in the game are also quite obvious. There is usually a brick that is clearly the easiest to remove so anyone with a basic understanding of physics (don’t remove bricks that are supporting other bricks) should have no problem figuring out which brick they should remove on their turn. Finally the wall itself doesn’t contain that many bricks in the first place which means each brick has to support fewer bricks. This means you can remove quite a few bricks before the wall becomes unstable.

Other than the addition of the rammer hammer the one other slight change from your typical stacking game is the fact that you are not automatically eliminated from the game if you knock over part of the wall. The only way you are eliminated from the game is if you knock over the knockout brick. This is actually pretty interesting as it actually adds a little strategy to the game. Instead of always trying to remove a brick that won’t disturb the wall at all, you can choose to take out a brick that will knock out some of the wall without disturbing the knockout brick. You could do this to avoid a riskier brick closer to the knockout brick or you could do it on purpose to limit the number of bricks that the other players can choose from on a future turn. While the rule is pretty simple, I actually thought it added quite a bit to the game. While it wouldn’t work for every stacking game, I actually think it would be an interesting variant rule for some games.

I will admit that I was actually somewhat surprised by Knockout. While it shares a lot in common with your typical stacking game, it actually has some nice additions that make it stand out from the rest of the genre. At the end of the day though, it is another stacking game that uses many of the same mechanics as other games in the genre. Basically your enjoyment of Knockout is going to come down to whether you enjoy stacking games. If you have never liked Jenga or other similar games, you won’t like Knockout. If you want a stacking game made more for adults, I think Knockout also won’t be for you. If you are looking for more of a family stacking game though I think you could enjoy Knockout quite a bit.

Other than not being original, I think the biggest problem that I had with Knockout is something that it shares in common with most other games from this genre. Like all stacking games where you begin with a built tower, you will spend close to as much time building the wall as you do playing a round. It is not difficult or time consuming to build the wall but rounds are so short. There is also the fact that Knockout is an elimination game where the player who loses a round has to sit around watching the other players. I don’t know if there was another way the game could have handled it but I have never been a big fan of player elimination that forces players to sit around waiting for the other players to finish.

As far as thecomponents there are things that I really liked and other things I think Knockout could have done better. As I have already mentioned, I love the rammer hammer. It works surprisingly well. The problem is all too often the rammer hammers in used copies don’t work. The rammer hammers in particular seem to be susceptible to battery corrosion where people leave the batteries inside and the batteries leak and ruin the rammer hammer. Before buying any used copy of the game I would make sure the rammer hammer still works. Overall I like the bricks as they are solid and colorful. I kind of wish the game included more bricks though as the wall is pretty small with the included bricks. I could actually see buying a couple copies of the game in order to acquire enough bricks in order to build a larger wall.

Should You Buy Knockout?

I have to say that I was a little surprised by Knockout. I never played the game as a kid so I had no nostalgic feelings towards it. The game looked a little childish and I didn’t think the addition of a jackhammer was going to be enough to really distinguish Knockout from the many other similar games. I was genuinely surprised by how fun it was to use the rammer hammer to knock bricks out of the wall. The game also gives you some leniency to strategically destroy part of the wall. At the end of the day though Knockout is a pretty basic stacking game. It is not that hard to remove bricks and any decisions you have to make are pretty obvious. Knockout also doesn’t do much to distinguish itself from all of the other similar games.

Basically if you have never liked stacking games like Jenga, Knockout is not going to be for you. If you want a more challenging game it also won’t be for you. If you like stacking games though and want one that adds an interesting mechanic into the mix, I think you could do worse than Knockout. If you can get a good deal on Knockout, I think it is worth looking into.

If you would like to purchase Knockout you can find it online: Amazon