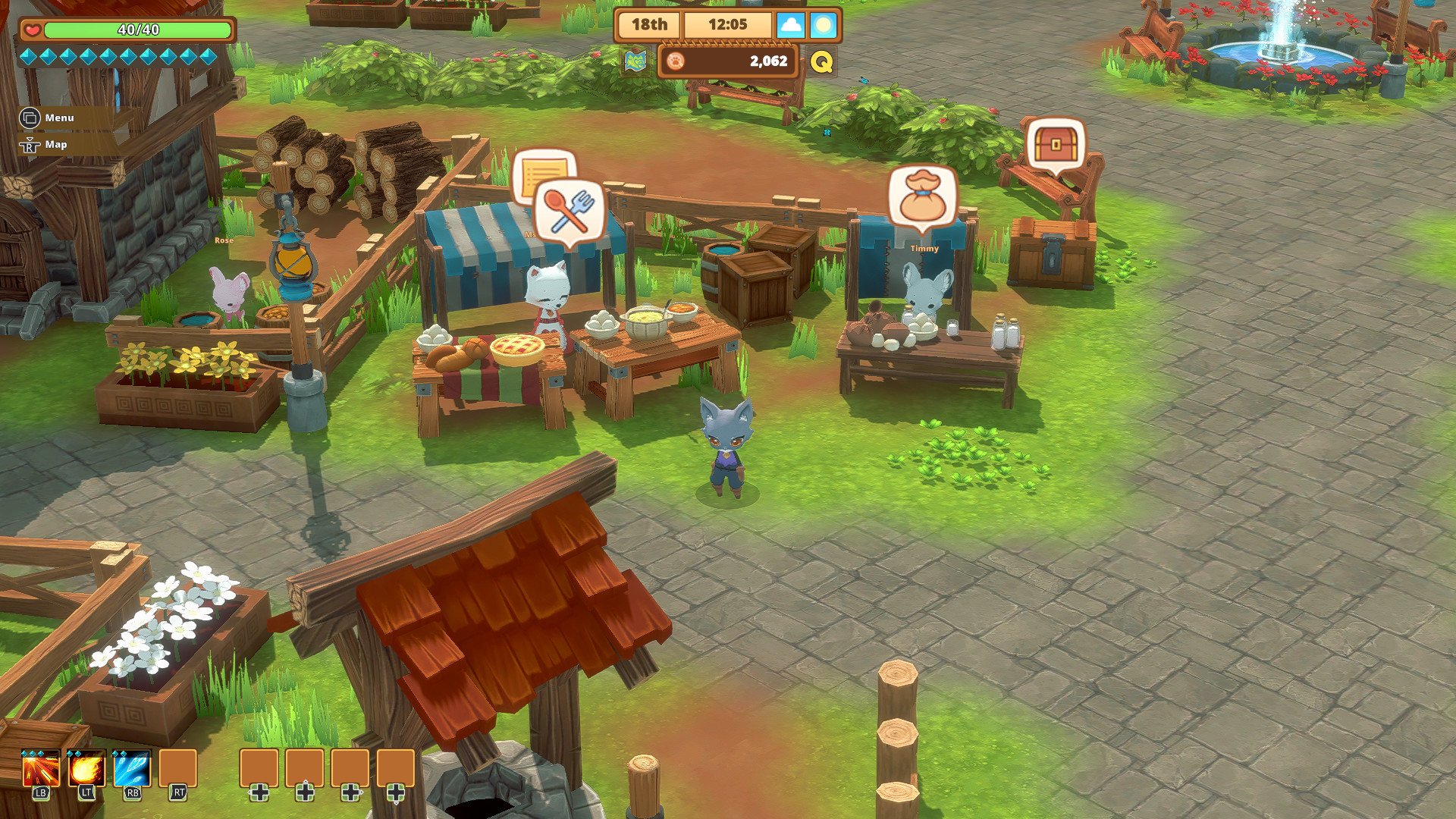 One of the most popular mechanics to add to video games in recent years has been crafting/resource gathering. At this point most games in many different genres have some sort of craft mechanic. While I generally enjoy these type of games as they can be kind of relaxing, there are so many games nowadays that utilize these type of mechanics that it is hard to find games that truly stand out. I was hoping that Kitaria Fables, which released today, would be a game that would find a way to stand out. I was intrigued by the game due to its cute theme and the fact that it looked like more than just your typical crafting game. Kitaria Fables combines a cute atmosphere with somewhat fun gameplay, but fails to really differentiate itself in any meaningful way.

The land of Kitaria has been peaceful for a long time. Darkness is starting to grow in the kingdom though as the local wildlife and creatures have started to attack citizens. You have been dispatched from The Empire to the once peaceful town of Paw Village to protect it. As you settle into your Uncle’s former home/farm, you begin to uncover what is causing the current chaos in the region.

Kitaria Fables is a combination of a number of different mechanics. I would say that the game’s main mechanic is an action adventure element. A lot of the game involves traveling between different locations. Along the way you will encounter various creatures which will attack you. You are given a sword and a basic attack. There is also a dodge and you start to learn various magic spells pretty early in the game. You can lock onto enemies with the press of a button. In order to defeat an enemy you have to deplete its health to zero while not running out of health yourself. In addition to the creatures you encounter while journeying, you will also have to complete a number of dungeons which consist of a couple of floors and a boss at the end.

The action adventure element of the game is pretty similar to most games from this genre. The combat is pretty fast paced as you can keep pressing the attack button to attack enemies quickly. You need to be careful of enemy attacks though and dodge out of the way as they can deal a lot of damage. I wouldn’t say that the combat is particularly deep, but I had fun with it. Sometimes it is just fun mindlessly attacking creatures. The controls aren’t the most precise as they feel a little “floaty” at times, but the lock on feature is really appreciated. The game doesn’t revolutionize the genre in any meaningful way, but you can have fun with this aspect of the game if you like these type of games.

As for the game’s difficulty I would say that it is on the easier side. If you just go into battles attacking with no abandon you likely will have issues as enemy attacks can deal a lot of damage. You will need to periodically dodge enemy attacks. The game does kindly point out when you should dodge though. The game will display a damage area around the enemy and when it turns red you need to dodge out of that area quickly to avoid damage. This is pretty easy to do where if you pay attention to your surroundings you should be able to avoid most damage. I would say that the game is challenging enough where it won’t be a cakewalk, but if you are looking for a real challenge you may be a little disappointed.

I enjoyed the action adventure element of the game, but I do think the mission structure could have been improved. In a way the mission structure reminded me of 1990s/2000s games. The game basically relies on a lot of fetch and delivery quests. At least early on many missions basically boil down to going to a location, gathering a number of resources, and then taking them to a character to complete the mission. This mission structure ends up leading to a lot of backtracking as you travel back and forth between locations. The addition of fast travel does help as you can skip some areas while traveling. The biggest problem that I had with the backtracking is just the fact that each area is pretty small and each time you enter a new area you will get a loading screen. These loading screens are pretty short, but they can still be a little frustrating.

Other than the action adventure element, the game also has a crafting and farming mechanic. After a couple of days have passed you will receive a set of tools which you can use to acquire resources. You can cut down certain trees and use your pickaxe on certain rocks in order to acquire the corresponding resources. You can also use your Uncle’s farm in order to grow crops. All of the resources that you gather can either be sold or be used to acquire new equipment or used to create food items which can heal your health in combat.

The crafting/farming aspect of the game is pretty much what you would expect from the typical game from this genre. For farming you follow the typical process of tilling the land, planting the seeds, watering the seeds for a couple of days, and then harvesting the finished crops. Cutting down trees and mining rocks is the same as pretty much every game that includes this type of mechanic. I did find the mechanics to feel a little grindy at times as many of the upgrades require a lot of resources. While not particularly original, these elements can still be fun. If you generally enjoy these type of games, I see no reason why you wouldn’t enjoy them in Kitaria Fables as well.

This illustrates the biggest problem that I had overall with Kitaria Fables. While I had fun playing the game, there just isn’t anything about the game that feels particularly original. If you have ever played a game from these genres before, you should already know what to expect out of the game. I don’t know if there is a single mechanic in the game that I haven’t seen used in another game before. This leads to a game that just feels kind of average. It is not bad, but it really doesn’t do anything that you can’t expect to get from another game from the genre. If you really enjoy these type of games, I think you will enjoy Kitaria Fables as well. If you aren’t the biggest fan though, I think there will be better games in this genre that you would probably prefer over Kitaria Fables.

The only thing that I found which makes it somewhat stand out is the fact that the game supports local co-op which isn’t the case for most of the games from this genre. I was a little skeptical as some games claim to have co-op and it just feels like an add-on as the second player can’t really do anything. That is not the case for Kitaria Fables as the second player can pretty much do everything that the first player can. The second player doesn’t seem to be able to turn in quests which is kind of annoying. The game also only gives you one set of tools which is disappointing. The NPCs also act like there is only one player which while slightly impacting immersion, isn’t a big deal. These issues are forgivable because the game deserves credit for adding the co-op mode in the first place. The game is fun to play with another player. It does seem to make the combat even easier, but if you have another person to play the game with I would recommend it.

I would say that one of Kitaria Fables’ biggest strengths is its overall atmosphere. I found the game to be pretty cute/charming. In a way the game kind of reminds me of Animal Crossing with the anthropomorphized animals. I thought the game’s visuals were quite good. I do think most of the locations in the game could have been larger, but I think the game deserves credit for the world it creates as it looks nice. Kitaria Fables is the type of game that relies on a more laid back feel, and the game’s atmosphere helps with this. As for the story I found it to be solid even if it may not be the most original. I haven’t completed the game so I don’t know where it will end up, but so far it does seem similar to a lot of games with similar premises. This doesn’t mean that the story is bad as it is enjoyable enough that I wanted to see how it would end. I wouldn’t buy the game solely for its story though.

As for Kitaria Fables’ length it is hard to give a good estimate. I haven’t beat the game so I can’t really give one anyway. How much time you get out of the game is really going to depend on how you approach it. If you rush through the game just trying to complete all of the missions it will take considerably less time than if you take your time and enjoy the experience. How much time you spend with the resource gathering elements will matter as well. Because of these facts I am not going to even try to give an estimate for how long it will take to complete the game. I will say that you likely will get at least 10+ hours and you could probably get considerably more. If you like these type of games, I think you will get your money’s worth out of Kitaria Fables.

At the end of the day I had pretty mixed feelings when it came to Kitaria Fables. There are things that I liked, but there were issues as well. The game is a combination of an action adventure game combined with a resource gathering/farming game. I had fun with both of these mechanics as they are simple and straight to the point. I would say that the game is on the easier side, but the game is striving for a more laid back feel. The atmosphere is quite good as well. I even liked that the game includes a local co-op mode which works well for the most part. The main problem with the game is just that it feels kind of average in many ways. There is nothing particularly original about the gameplay so if you have already played a game from these genres you probably won’t find anything new in Kitaria Fables. The game also seems to rely on a decent amount of backtracking and fetch quests. I enjoyed playing Kitaria Fables, but the game is missing something which prevents it from really standing out.

My recommendation for Kitaria Fables comes down to your thoughts on the premise. If you don’t really care for the premise or aren’t a big fan of the action/adventure mixed with resource gathering genre, I don’t think the game will be for you. If you are intrigued by the game though and don’t mind that it is not the most original, I think you will enjoy Kitaria Fables and should consider picking it up.