Around two and a half years ago I took a look at the board game Kingdomino. Winner of the Spiel Des Jahres in 2017 Kingdomino was a fantastic game that I really enjoyed playing. It was the perfect blend of simple gameplay that almost everyone could play with a surprising amount of strategy which created the perfect balance between simplicity and strategy. The game has had a couple of expansion packs released over the years. Another expansion was planned for later this year called The Court. Due to the Coronavirus outbreak in 2020 though Bruno Cathala, Blue Orange Games, and everyone else who worked on the expansion decided to release it early though to give people something to do while stuck at home. The even better news is that they released it as a free print and play which you can find here. If you have either Kingdomino or Queendomino and a printer you have everything you need to enjoy the expansion as you just have to print it out and cut out the components. As a fan of the original game I was excited to try out the expansion pack. Kingdomino: The Court takes the already excellent gameplay from the original game and adds an interesting new resource mechanic which improves on the strategy of an already great game.

How to Play Kingdomino: The Court

Note this review is based on the free print and play version of the game released by Blue Orange Games in response to the Covid-19 pandemic. As I don’t have a color printer the pictures in this section will be in black and white while the actual print and play is in color.

As this is an expansion to Kingdomino I will only be discussing what is new in this expansion. For an explanation on how to play the main game check out my review of Kingdomino.

Whenever a new tile is turned over and placed on the table (including during setup) check to see if resources need to be added to it. A resource token will be placed on each section of a tile that doesn’t feature a crown. The type of resource you place on the space depends on the type of terrain. 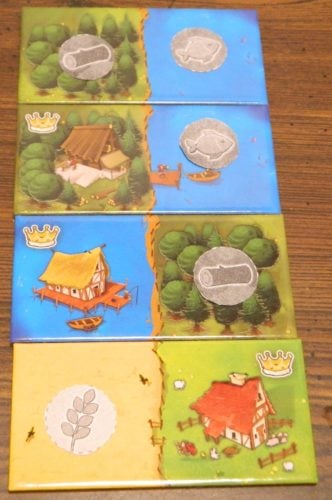 Players will then take their turns as normal placing tiles and choosing their next tile. Before play passes to the next player the player has an additional action they may take though. 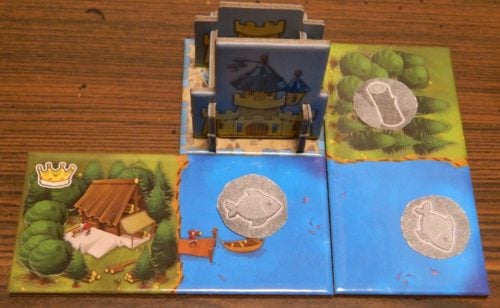 This player has placed two tiles into their kingdom. These tiles feature two fish and one wood resource. If the player wanted to they could redeem some of these resources in order to purchase a building/character tile.

This player has used one of their fish and wood resources to purchase a tile. They can purchase the lake building, the soldier, or the merchant. This tile will be added to one of the tiles they have already added to their kingdom.

Your other option is to spend four different resource tokens in order to look through the face down pile of tiles and choose whichever tile you want. After looking through the tiles they will be shuffled and placed back on the corresponding space.

This player has paid four resources of different types. They will be able to look at all of the face down tiles and choose whichever tile they prefer.

After a player acquires a building/character tile they will choose where they would like to place it in their kingdom. These tiles will be placed on top of one of the tiles already in your kingdom. There are a couple rules regarding where a tile can be placed. 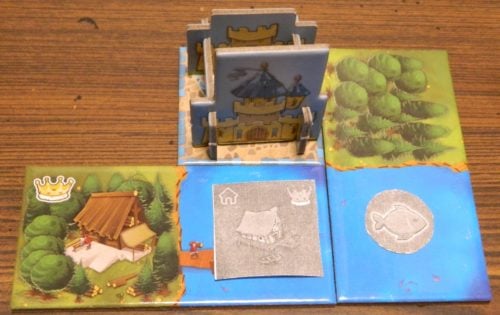 At the end of the game the two types of tiles score differently.

The building tiles add additional crowns to a land type which increases the score of their corresponding property. 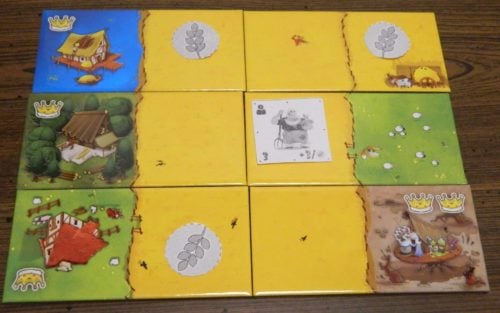 My Thoughts on Kingdomino: The Court

As this is an expansion to the original Kingdomino to fully appreciate it you need to be familiar with the original game. For those who have already played the original game you already know what to expect. Those that have never played Kingdomino should check out my review of the original game as it is a really good game that I would highly recommend. Instead of wasting time rehashing what I said in my other review this review will mostly just be talking about The Court expansion pack. If I were to wrap up my thoughts of the original game in just a couple sentences I would say that it is the perfect combination of simplicity and strategy. The game takes minutes to learn and is easy enough that almost anyone can play it. Yet there is quite a bit of strategy as you figure out which tiles to take and where you should place them to maximize your score.

So what about Kingdomino: The Court? The expansion pack is actually quite simple. It is the literal definition of an expansion pack. None of the mechanics from the original game have changed at all. Kingdomino: The Court basically just adds a resource mechanic to the original game in order to give players more options. This involves basically two new elements.

The first new element is the addition of resource tokens. Whenever new land tiles are revealed you will place resource tokens on some of them. Every forest, lake, meadow, and wheat field square that doesn’t feature a crown will receive a resource token of the corresponding type. Mostly the resource tokens are used as a way to add value to squares that don’t feature any other valuable features. In the base game crown squares are considerably more valuable than standard squares as they increase the multiplier in addition to adding to the size of a property. Normal squares only added to the size of a property. Therefore it was always more beneficial to take a tile with a crown over a tile without one as long as it worked with the kingdom that you were building.

The main use of resource tokens will be to purchase some of the new tiles that are included in the expansion pack. These tiles come in two types. First there are buildings. These tiles are pretty straightforward. These tiles feature crowns on them which can be added to the corresponding type of land. Thus purchasing building tiles is a roundabout way of adding crowns to your properties. Instead of picking up a tile that features a crown you can use two different resource tokens that you have acquired to place a building with a crown on one of your squares that don’t feature a crown. You can then place the building on any square of the corresponding type that you want. This allows you to considerably raise the multiplier of some of your properties.

I honestly think Kingdomino: The Court is the perfect example of what an expansion pack should be. The new mechanics don’t interfere with the original mechanics and just add onto them in order to make a more complete game. The new mechanics in the game add minimal complexity. You could teach the new mechanics in maybe two or three minutes. They may also extend the game by a little time as players take some time to decide what they want to do with their resources.

Despite not touching the original mechanics the expansion pack genuinely adds some new exciting elements to the game. The addition of the resources, buildings, and characters add strategy to the original game. They don’t turn Kingdomino into a highly strategic game, but they do add interesting decisions which give players more control over their fate in the game. When players get stuck with worse tiles it eliminates some of disadvantage as you can recoup some of that lost value by utilizing the resource tokens. Using your resource tokens well will improve your odds of winning the game.

There are plenty of opportunities to mix the resources, buildings, and characters with your typical Kingdomino strategy. As a matter of fact the expansion pack allows you to score considerably more points than the original game. With the buildings you can increase your multipliers increasing how many points you can score from properties. Characters can score a lot of points as well if they are placed well in your kingdom. You will still probably score a majority of your points from the original tiles, but these additions supplement the amount of points that you score. If you felt that the original Kingdomino was a little too reliant on luck Kingdomino: The Court adds more strategy to the game which helps shave off some of this reliance on luck.

As for the components I can’t really comment much as it really depends on the resources you have available. The game is print and play so all you have to do is download the pdf and print it out on your printer. Thus the quality of the components comes down to the paper and printer you have available to you. The game’s artwork is fantastic like the original game. The components suffer a little though if you only have access to standard paper and a black and white printer which I know from experience. With the right cardstock of paper and a color printer though you could make them look really nice. Some people over on BoardGameGeek have even designed 3D components for the game that you can make if you have access to a 3D printer. Despite the fact that you can print your own version of the game I am hoping that Blue Orange Games decides to eventually commercially release the expansion as I would like to eventually purchase a copy with as great of components as the original game.

Should You Buy Kingdomino: The Court?

As a big fan of the original Kingdomino I was really excited when I heard about Kingdomino: The Court. After playing the expansion I have to say that it is everything that you should expect from an expansion pack. The game doesn’t drastically alter the original game as all of the original mechanics are left intact. Instead the game adds a few new mechanics that add to an already great game. The new mechanics are really simple as they can be taught in just a couple minutes. They add a surprising amount of strategy to the game though. First they add some value to otherwise basic squares as they give you resource tokens that can be used to purchase valuable tiles. These tiles either add crowns to the spaces in your kingdom or add characters that have unique ways of scoring points based on the neighboring spaces. These mechanics genuinely reduce some of the luck from the original game while giving players more strategic options and increasing scores. Kingdomino: The Court is basically the perfect expansion as it improves upon the original game without drastically changing it.

If you would like to play Kingdomino: The Court you can print out your own copy for free from Blue Orange Games website.

Articulate! Board Game Review and Rules